As the northern summer draws to a close, two milestones have been reached in the Arctic Ocean — record-low sea ice extent, and an even more dramatic new low in Arctic sea ice volume. This extreme melting offers dramatic evidence, many scientists say, that the region’s sea ice has passed a tipping point and that sometime in the next decade or two the North Pole will be largely ice-free in summer.

NASA and U.S. ice experts announced earlier this week that the extent of Arctic sea ice has dropped to 4.1 million square kilometers (1.58 million square miles) — breaking the previous record set in 2007 — and will likely continue to fall even farther until mid-September. As the summer melt season ends, the Arctic Ocean will be covered with 45 percent less ice than the average from 1979 to 2000. 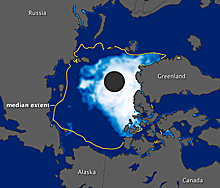 NASA
On August 26, Arctic sea ice reached a new record-low summer extent.
Even more striking is the precipitous decline in the volume of ice in the Arctic Ocean. An analysis conducted by the University of Washington’s Pan Arctic Ice Ocean Model Assimilation System (PIOMAS) estimates that sea ice volumes fell in late August to roughly 3,500 cubic kilometers — a 72-percent drop from the 1979-2010 mean.

Peter Wadhams, who heads the Polar Ocean Physics Group at the University of Cambridge and who has been measuring Arctic Ocean ice thickness from British Navy submarines, says that earlier calculations about Arctic sea ice loss have grossly underestimated how rapidly the ice is disappearing. He believes that the Arctic is likely to become ice-free before 2020 and possibly as early as 2015 or 2016 — decades ahead of projections made just a few years ago.

Mark Drinkwater, mission scientist for the European Space Agency’s CryoSat satellite and the agency’s senior advisor on polar regions, said he and his colleagues have been taken aback by the swiftness of Arctic sea ice retreat in the last 5 years. “If this rate of melting [in 2012] is sustained in 2013, we are staring down the barrel and looking at a summer Arctic which is potentially free of sea ice within this decade,” Drinkwater said in an e-mail interview.

A small number of climate scientists say that natural variability may be playing a significant role in the rapid retreat of Arctic sea ice, intensifying human-caused climate change, and they caution against predicting the imminent demise of the region’s summer sea ice. But an

Extraordinarily low ice levels indicate the summer sea ice has passed a point of no return.

The dramatic ice loss is being driven by a several key factors, scientists say. Chief among them is that decades of warming have so extensively melted and thinned Arctic sea ice that rapidly expanding areas of dark, open water are absorbing ever-greater amounts of the sun’s radiation, further warming the region in a vicious cycle.

Second, swiftly warming air and ocean temperatures in the Arctic have, for now at least, altered atmospheric activity, with two consequences: Warmer air is being pulled into the Arctic, and increased storms and cyclones in summer are not only driving ice out of the Arctic basin, but also breaking up the ice pack and further exposing more dark water.

And finally there is the inescapable reality that steadily rising levels of carbon dioxide being pumped into the atmosphere by human activity are continuing to warm the Arctic and the rest of the globe, further hastening the loss of Arctic Ocean ice. Several experts say that the only thing that could slow this disappearance — and then only for a few years — would be a major volcanic eruption that reduces the amount of the sun’s energy striking the earth.

“It’s sobering to see the Arctic change so rapidly,” said Ted Scambos, senior research scientist at the National Snow & Ice Data Center in Colorado. “Simply staring at the satellite data that we’re seeing every day is awesome, but in a sad sort of way. It doesn’t look like the Arctic anymore. The summer ice used to look like a cap that nearly filled the Arctic basin. It now looks like a raft with room on every side. You can imagine what it’s going to

‘The summer ice used to look like a cap”¦. It now looks like a raft with room on every side.’

look like when the North Pole is open water, when there is only a tiny amount of ice left in August and September. The planet will look a lot different.”

The loss of the great white dome of ice at the top of the world in summer will have profound effects, scientists say. These include a reduction of the amount of solar radiation reflected back into space by the ice, significant changes to the jet stream and Northern Hemispheric weather patterns, and even-more rapid warming in the far north, speeding the melting of Greenland’s massive ice sheets and increasing global sea levels.

In addition to these impacts, said Drinkwater, “Increased storminess will generate ocean wave systems which, un-damped by the presence of sea ice, will pound the circumpolar north coastlines. Current rates of coastal permafrost degradation will be accelerated, leading to significant coastal erosion and reconfiguration of the high-latitude shoreline. Meanwhile, we have also recently heard about the potential for release of sub-sea methane deposits and thereby an acceleration of the current greenhouse effect.”

The record low sea ice extent in 2007 of 4.2 million square kilometers was due to some unusual circumstances, including a sunny summer in the Arctic and higher temperatures. Summer sea ice extent rebounded somewhat in the next several years, rising to 5.3 million square kilometers in 2009, giving some hope to mainstream scientists that Arctic sea ice was not in a “death spiral.”

But Scambos and other experts say that recent data on plummeting ice extent and volume show that the Arctic has entered a “new normal” in which ice decline seems irreversible. Because of thinning ice and swiftly expanding areas of open water, the Arctic Ocean will no longer be kept frigid in summer by the reflectivity of snow and ice — the so-called ice-albedo effect, in which ice and snow reflect a high percentage of the sun’s energy back into space. 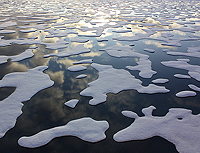 NASA
Melting Arctic sea ice.
Thick sea ice that formed over many years is increasingly rare in the Arctic. In the 1960s, submarines routinely encountered 12-foot-thick ice around the North Pole and 20-foot-thick ice in some other areas; now those regions often contain ice that is only three to four feet thick. Many parts of the Arctic Ocean are now covered with thin, year-old ice that melts quickly in spring and summer.

This spring, noted Scambos, extensive late winter snow cover on land melted unusually rapidly, reaching record low levels by June. Sea ice across much of the Arctic began to melt 10 to 14 days earlier than in the preceding few decades. Relatively clear skies from late May through June further hastened the melting of sea ice, but even as cloudier weather prevailed in July and August, the record sea ice retreat continued.

“The sensitivity of the Arctic to a warm summer is much higher now than it was in the 1990s or early 2000s,” said Scambos. “What we’re seeing last year and this year is that 2007 wasn’t a fluke. As we’ve gone forward a few years, we’re seeing that many different patterns of weather lead to significant sea ice loss in the Arctic.”

Scambos does not foresee summer sea ice in the Arctic largely disappearing this decade, estimating that such an event could occur around 2030, “plus or minus a decade.” He said the “endgame” of Arctic summer sea ice will probably mean that around 1 million square kilometers — about 15 percent of what existed in the mid-20th century — will remain in the Canadian High Arctic and some other regions, leaving the North Pole generally ice-free in August and September.

Drinkwater said that changing weather patterns, related to more heat and moisture being released into the Arctic atmosphere, have played a significant role in accelerating sea ice loss. Sea ice retreat in the past decade has been accompanied by a trend toward lower atmospheric pressure and more storms and cyclonic activity, which in turn breaks up

the pack ice and exposes more open water. A powerful Arctic storm earlier this month did just that, Drinkwater noted.

He said that Arctic sea ice could conceivably rebound for some period of time if atmospheric circulation changes and a pattern known as the Arctic Oscillation — currently in a positive phase — moves into a negative phase and ushers in a period of prolonged high atmospheric pressure and fewer storms. This, said Drinkwater, would enable sea ice to remain trapped in the Arctic basin and thicken.

“However,” added Drinkwater, “this seems like blind hope in a system whose feedbacks all appear geared to getting rid of sea ice.”

Judith Curry, a climatologist and chair of the School of Earth and Atmospheric Sciences at the Georgia Institute of Technology, said that while global warming is “almost certainly” affecting Arctic sea ice, she cautioned that there is a great deal of annual and decadal variability in sea ice cover. She said that the next 5 to 10 years could see a shift in Arctic sea ice behavior, though exactly in which direction is difficult to predict.

“I don’t see [the] summer of 2012 portending some sort of near-term `spiral of death’ in the sea ice behavior,” Curry said in an e-mail interview. “I don’t think this apparent record sea ice minimum is of particular significance in our understanding of climate variability and change of Arctic sea ice.”

Linking Weird Weather to Rapid Warming of the Arctic

The loss of Arctic summer sea ice and the rapid warming of the Far North are altering the jet stream over North America, Europe, and Russia. As Jennifer Francis writes, scientists are now just beginning to understand how these profound shifts may be increasing the likelihood of more persistent and extreme weather.READ MORE
Jay Zwally, chief cryospheric scientist at NASA’s Goddard Space Flight Center and an observer of Arctic ice for 40 years, places little stock in the likelihood of a reversal of disappearing Arctic ice. New satellite technology has given scientists the ability to measure the height of sea ice above the water, and hence ice volume. Those measurements, he said, have vividly underscored that Arctic sea ice is in a swoon.

“We’ve gone through a tipping point, and of all the things a tipping point applies to, sea ice is the most appropriate, because the idea is when it goes below a certain thickness it doesn’t go back under present conditions,” said Zwally. “People can get hung up on the specifics and lose track of the big picture, which is that it’s getting worse and it’s going to get [even] worse.”