Ever since Darwin, biologists have been arguing about altruism — the concept that an individual may behave in a way that benefits its species, at a cost to itself. After all, the self-sacrifice implicit in altruistic behavior seems to run against the grain of evolutionary theory, which proposes that the well-being of a species depends on robust, individual self-interest. Many biologists argue that in the non-human world what looks like altruism — benefiting another at a cost to oneself — may be merely the final refinement of self-interest, self-interest operating not at the level of the organism or the species but at the level of the gene. 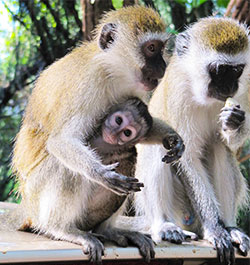 Vervet monkeys cry out to alert fellow monkeys to predators even though it calls attention to themselves. DARYONA/CREATIVE COMMONS

This is all very interesting. But the discussion nearly always concerns the behavior of individuals within a single species — the warning cries of vervet monkeys, which alert their fellow monkeys to predators while calling attention to themselves; the self-abnegation of a stinging bee. What I wonder is this: Is altruism possible across species boundaries? Can an individual from one species, at cost to itself, act in a way that benefits individuals from another species? And — the crucial question — can an entire species learn to shape its behavior, to its own cost, for the good of other species?

What makes us so good at destroying vast quantities of other creatures is the vast quantity of us.

Nor did we — whoever we are — choose to swell our own numbers from some 3.7 billion to roughly 7.2 billion. They’re both effects of a cause we don’t understand, which is our nature as a species. Here we all are — whoever we are — and nowhere to be found are all those vanished animals and their doubly vanished, unbred, unborn descendants.

Here’s who I think we are. We resemble every other species on this planet. None of them seems to be able to favor the well-being of any species but its own. If a species escapes its natural bounds — think Japanese knotweed or lionfish or even whitetail deer — it spreads until it reaches its natural or unnatural limit.

It’s easy to think, “Well, of course. No other species could conceive of being altruistic to the creatures it shares the earth with. No other species has a conscience or the intelligence to act upon it.” But I see no signs that we do either. No matter how hard you work, personally, for the conservation of other species, no matter how many groups we form or how much we protest or how much money we raise, I see no sign that humans, as a species, are able to act differently than any other species would act if it got the chance. Our vast cultural intelligence has freed us, so far, from the strict boundaries of habitat, freed us to behave, in other words, with absolutely unregulated, unconstrained self-interest — just like any other species on this planet.

Humans have always had a hard time thinking of themselves as creatures, strictly akin in nearly every way to all the other creatures on this planet.

Is there anything inside us that might allow us to behave altruistically, and consciously so, toward the rest of life on earth?

We’ve always insisted on our specialness. But we’re special in ways that have freed us — so far — only to behave as if we’re utterly ordinary. We turn out to be creatures who can be restrained, collectively, only in the ways that every other creature is restrained, by scarcity and death. As a species, we appear to be utterly incapable of self-restraint. This is something we share with every other organism on this planet.

I felt a sharp stab of pain and anger when I read the World Wildlife Fund report detailing the demise of so much earthly life. And I began to wonder: In what index of human motives or emotions — the forces that shape our behavior — will we find the one that truly binds us to the other species on this planet? Is there anything inside us that might allow us to behave altruistically — and consciously so — toward the rest of life on earth?

The answer seems very grim to me. Whoever we are as persons, as nations, even as civilizations, what really matters, when it comes to protecting other life-forms, is who we are as a species. Yet it appears to me that nothing in our makeup allows us to respond effectively to this terrible census of the animal dead. Logic doesn’t deter us. Neither does emotion. Self-interest is an abstraction — it barely crosses social or racial boundaries, never mind the boundary of species. Economic motives are far too easily perverted. They’re how we got here in the first place. So far, it looks as though the only real restraint will turn out to be scarcity and death — two things we’ve committed ourselves to defeating.

Why bother to say these things? What good does it do to sound so grim? For one thing, I know almost nothing grimmer than the fact — not the thought or the idea — that so much life and diversity has simply vanished. For another, we need to know just how hard the job really is if we’re going to do anything about preserving the life and diversity that remains. For this is the background condition of the human condition: Solve global warming, eliminate the nuclear threat, and we will still have to confront the vastness of our species and the way it diminishes, without thinking, all the other species around it.