Shortly after the Exxon Valdez oil spill gripped the world with images of an environmental assault, the CEO of the oil company predicted that in a few years there would be “nothing” to evidence the disaster.

He was wrong. Today, 20 years after the largest spill in U.S. waters, the oil that gushed from the hull of the Exxon Valdez is still having effects.

Sea otters once again play in the waters of Alaska’s Prince William Sound, and salmon and some other species have rebounded. But killer whale populations have not recovered, and the huge schools of whirling herring that fed both fishermen and animals have not returned, reminding scientists that nature’s responses are complex and unpredictable.

Humans, too, have had a mixed response. Maritime safety agencies mandated key improvements: single-hulled tankers are finally on their way out, and some places, like the Alaskan town of Valdez, have created impressive spill response teams. But our thirst for oil — coupled with the steady disappearance of Arctic sea ice — is now prompting ambitions to drill across the Arctic, where a spill could bring a greater disaster. 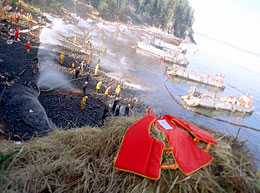 A government-created panel concluded that high-pressure hoses used on Prince William Sound beaches during the cleanup did more harm than good. WIKIMEDIA

The jeweled beauty of the waters off Cordova and Valdez was disfigured on March 24, 1989, by the stain of 11 million gallons of crude oil, pouring from a gash in the single hull of the Exxon Valdez. The ship had bellied into a well-known reef as its captain slept off a vodka bender and, at the wheel, his third mate missed a turn.

The spill remains the most costly maritime accident in the world. Volunteers rushed to Valdez to scrub otters and ducks with gentle soap, only to watch them die. Exxon papered the towns with money, hiring fishermen to wash oil off the beaches. The company soon declared the once-pristine area largely healed, even as its creatures continued to die.

Exxon also sent waves of lawyers to fight the court awards from the spill, finally last year winning a U.S. Supreme Court decision allowing the company to pay about ten cents for each dollar of the original award to fishermen and others affected by the spill.

The most positive results from the disaster involve oil tanker safety. In 1990, the U.S. Congress passed the Oil Pollution Act, requiring a phase-out of single-hulled oil tankers in U.S. waters by 2010 — a belated acknowledgment that a double-hulled tanker would have contained much of the oil lost from the Exxon Valdez. The Act set up a liability fund, toughened spill disaster plans, and created a mechanism for citizen-led oversight committees to police safety claims by shippers.

Special tugs now usher tankers in and out of Valdez to the open sea. Response teams armed with pre-positioned equipment have successfully handled smaller spills at Valdez. The Coast Guard, which failed to watch the errant course of the Exxon Valdez, now has a sophisticated satellite tracking system for maritime traffic past the straits.

“We certainly suffered and paid the price, but now we have the world’s most robust oil response anywhere in the world,” said Tom Copeland, who fished from Cordova and was a member of the citizen’s group that insisted on safety improvements.

Worldwide, the frequency of major accidents in oil shipping has dropped, and insurance experts say safety has improved. The requirement for double-hulled tankers spurred the shipping industry to modernize with much safer ships. Some oil companies, like Arco and BP, now use tankers that exceed the legal requirements, with redundant power and steering systems to minimize failures.

“On the whole, if you look at the long view of history,” said Aldo Chircop, a maritime law expert at Dalhousie Law School in Halifax, “the Valdez spill has pushed standards up.”

A 2001 federal survey found that oil remained on or under more than half of the sound’s beaches.

The International Maritime Organization eventually followed the U.S. lead, acting to phase out single-hulled oil tankers between 2010 and 2015. But it did so only after Europe’s own versions of the Valdez spill. The tanker Erika sank in 1999, coating French beaches, and the Prestige split up at sea in 2002, spreading heavy fuel oil onto Spanish coasts.

About 300 single-hulled tankers remain on the high seas, including the patched Exxon Valdez, renamed the Sea River Mediterranean. It is prohibited from entering Prince William Sound.

Exxon insists it has done its duty by paying $3.8 billion in cleanup costs and damages. The company reached a settlement with the state and federal governments in 1991 and paid nearly $1 billion, mostly for habitat and restoration programs. In addition, it has paid more than $2 billion in cleanup costs and another $507 million to compensate 11,000 fishermen, landowners, and businesses for their losses.

But in a class-action suit by about 32,000 plaintiffs, ranging from cannery workers to native Alaskans, a jury decided in 1994, that Exxon should pay punitive damages equal to about a year’s worth of Exxon’s profits, or $5 billion.

Exxon balked and embarked on a long-running legal battle. In 2006, a federal appeals court cut the award to $2.5 billion. Exxon appealed to the Supreme Court, arguing the punitive damages were excessive and a “windfall” to the plaintiffs. In a decision that set legal precedent in maritime law, the Supreme Court last June ruled 5-3 that punitive awards should not exceed actual damages, effectively limiting Exxon’s additional liability to $507 million.

“What industry learned is all they have to do is stall and they can get the Supreme Court to let them wiggle out of the punitive damages,” said Riki Ott, a marine biologist whose career in commercial fishing ended with the spill.

Melanie Duchin, a Greenpeace coordinator in Anchorage, said, “Most Alaskans are in favor of resource development. But there still is a lot of outrage with Exxon about how the plaintiffs had to wait to get such small punitive damages. There is a very bad taste in people’s mouths about Exxon.”

For many years Exxon has minimized the effects of the spill. In a statement last week responding to queries on the 20th anniversary, the company asserted that “there has been no long-term damage caused by the spilled oil,” adding, “The ecosystem in Prince William Sound today is healthy, robust and thriving.”

Exxon said it employed 13,000 people in the clean-up effort. But the dramatic scenes of hired workers washing oil off beaches turned out to be images of futility. Ott, who has written about the spill, says she can dig a hole in a beach on the sound and watch as it fills with oil. A 2001 federal survey found that oil remained on or under more than half the sound’s beaches.

Estimates of the total amount of oil that remains in the environment have varied, but the Exxon Valdez Oil Spill Trustee Council, a government-created monitor, concluded that the oil disappears at less than 4 percent per year. At that rate, the council said, the oil will “take decades and possibly centuries to disappear entirely.”

Since the spill, Prince William Sound has been among the most intensively studied of environments. But the more scientists have learned, the less they realize they understand how different species have been affected.

Scientists estimated that as many as 250,000 seabirds died in the days after the spill. WIKIMEDIA

The Trustee Council found 17 of 27 monitored species have not recovered. For example, researchers concluded that the high-pressure hoses used on the beaches did more harm than good. The pressure destroyed interlocking layers of gravel and flushed away fine sediments that scientists now know provided a kind of armor for the beaches during storms, helping to protect clams and mussels. The damage to the shellfish, in turn, slowed the recovery of otters, which feed on the mollusks.

Natural variability has increased the difficulty of calculating the spill’s effects. Wild pink salmon, for example, are listed as a “recovered” species, evidenced by a 2007 run estimated at 11.6 million fish. Their numbers, aided by a large hatchery operation, have rebounded from a low of 1.3 million three years after the spill. But it is hard to determine what is normal: pink salmon in the Sound before the spill varied from a high of 23.5 million fish in 1984 to a low of 2.1 million in 1988.

And while salmon are seen as a success story, the ecosystem in the sound is crippled by the failure to see a return of the huge schools of Pacific herring, which were hit by the spill just as they were spawning. The herring fishery, which provided up to half of the income of Cordova fishermen, has been closed to commercial fishing except for a few brief periods since the spill.

Scientists say they do not really understand why the herring stock has not rebounded. But they do believe that failure has reduced populations of seabirds that feed on the small fish. Investigators believe that 100,000 to 300,000 of the estimated 1 million seabirds in Prince William Sound died initially. Different species have recovered at different rates — murres have gradually returned in large numbers but other species like Harlequin Ducks and Black Oystercatchers have not — and the waterfowl may not fully recover until the herring are again healthy.

The food chain has magnified the effect of the spill in other insidious ways. Orcas, or killer whales, in the sound are afflicted by bio-accumulation of toxins. Fourteen out of the 36 killer whales in the resident Prince William Sound pod disappeared shortly after the spill. Researchers believe their lungs were seared by the toxic fumes, though orca carcasses usually sink, so no autopsy was possible.

The resident pod, which remains in the Sound and primarily eats fish, slowly is recovering. Another Prince William Sound pod of “transient” killer whales mostly eats sea mammals. As the chemicals in the spilled oil were ingested by animals higher on the food chain, the amount of chemicals, called polycyclic aromatic hydrocarbons, accumulated in marine mammals. Researchers theorize that may help doom the transient orca pod at the top of the food chain. They have “no hope of recovery,” the Valdez Oil Spill Trustee Council researchers concluded.

Fisherman Tom Copeland does not need the scientists to tell him that his old fishing grounds have not recovered. “It’s quiet in Prince William sound,” he said. “You don’t hear the birds. You don’t see the wildlife that you used to see. The ecosystem took a hell of a hit.”

“It’s quiet in Prince William Sound,” said one fisherman. “The ecosystem took one hell of a hit.”

Now, with Arctic sea ice disappearing, global oil companies are making plans to drill throughout the Arctic Ocean, which is estimated to contain as much oil as Venezuela and as much natural gas as Russia. The dangers of drilling and transportation in the Arctic are great. Dispersants used by oil companies do not work well at or near freezing temperatures. Booms to contain a spill cannot be used with icebergs floating in the water. The skimmer boats, tugs, and other equipment needed for quick response will be useless if they are parked far from a spill in an ice-locked inlet.

“Once the oil is in the water, you have lost most of the battle — you can’t recover it,” said Rick Steiner, a University of Alaska professor and an oil spill consultant. “I have worked on these things all over the world in the last 20 years and the take-home message is you can’t clean them up.”

To many conservationists and some residents of Prince William Sound, the lesson of the Exxon Valdez is clear: Until we stop focusing on extracting oil from ever-more remote environments, and concentrate instead on developing renewable sources of energy, another major spill in the Arctic is inevitable.

“The only real way to eliminate the risks to the environment is to get off of oil,” concludes Duchin, of Greenpeace. “It’s going to continue to happen until we break our addiction to fossil fuels.”