At the heart of the region now threatened by the massive oil spill in the Gulf of Mexico is a chain of islands containing tens of thousands of seabirds. Thin ribbons of sand rising no higher than 19 feet out of the gulf, these islands — part of the Breton National Wildlife Refuge — currently hold at least 2,000 nesting pairs of brown pelicans, 5,000 pairs of royal terns, 5,000 pairs of Caspian terns, and 5,000 pairs of various seagulls and shorebirds. Earlier this week, strong winds and barrier-like booms kept the oil slick from washing ashore on Breton Island, the Chandeleur Islands, and other links in the refuge. But the National Audubon Society reported May 5 that oil had reached the beaches of the Chandeleurs, putting the abundant birdlife there in peril.

More than a century ago, these islands held an even richer assemblage of bird species. Breton Island alone was home to 33 species of wintering waterfowl, wading birds, secretive marsh birds, and various shorebirds. When the birds were in full plumage, Breton Island was quite a sight. 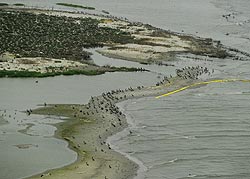 Because nobody lived on the barrier islands at the turn of the last century — they were isolated miles from Venice, Louisiana, with treacherous gulf waters in between — most Americans had never heard of the sandy breeding ground where pelicans and herons in the thousands populated the beach. But plume hunters in Mississippi and Louisiana had. Regularly gangs made “hits” on the islands’ nesting wading birds and seabirds. The birds’ feathers were worth a fortune for milliners because the delicate plumage was needed to adorn ladies hats — the fashion rage of the Gilded Age and beyond.

To Roosevelt, the despoilers and plume-hunters of the Gulf South were pirates, and he wanted the feather mafias arrested. “Wreckers are no longer respectable and plume-hunters and eggers are sinking to the same level,” Roosevelt wrote about Breton Island. “The illegal business of killing breeding birds, of leaving nestlings to starve wholesale, and of general ruthless extermination, more and more tends to attract men of the same moral category as those who sell whiskey to Indians and combine the running of ‘blind pigs’ with highway robbery and murder for hire.”

If Roosevelt hadn’t signed his executive orders, these islands might have been dead zones.

To stop the carnage, Roosevelt issued an executive order on October 4, 1904 creating the Breton Island Federal Bird Reservation off the southeast coast of Louisiana. The reservation was the second unit — after Pelican Island, Florida — of what would eventually become the U.S. National Wildlife Refuge System, whose stated mission was to “work with others to conserve, protect and enhance fish wildlife, plants and their habitats for the continuing benefit of the American people.” Today, the refuge system numbers 551 protected areas.

The history of Theodore Roosevelt and the creation of the U.S.’s first wildlife refuges in is one of the seminal stories in American conservation. For most of his adult life, Roosevelt was a staunch Auduboner. As U.S. President from 1901 to 1909, he kept a White House bird list. He regularly met with his ornithologist friends Frank M. Chapman (American Museum of Natural History) and Herbert K. Job (author of Wild Wings and Among the Water Fowl.)

Breton Island had been formed from remnants of the Mississippi River’s Saint Bernard delta. To some sailors the island was little more than a long sandbar of broken shells, Sargasso weed, and wind-twisted pine boles. But when the sun set in dramatic shades of day-glo red-orange-purple, the island could look more enticing than a Yucatan Peninsula beach resort.

To President Roosevelt’s way of thinking, he had created a bird reservation at the “mouth of the Mississippi” where his beloved brown pelicans (perhaps the bird species he enjoyed the most) could prosper. Breton Island was a prime place where herons and terns built nests, dived for fish, and hunted for fat shrimp. 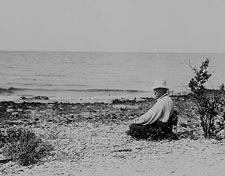 Six years after leaving the White House, Roosevelt decided to spend a week living on America’s wildlife-rich barrier islands. On June 7, 1915, ex-president Roosevelt, accompanied by his wife, Edith, arrived in New Orleans by train and then traveled to the Mississippi Gulf Coast town of Pass Christian. Instead of having professional hunters like Holt Collier or Ben Lilly as his companions, Roosevelt joined up with solid preservationist types, such as Frank M. Miller, the founder of the Louisiana Conservation Commission. Their goal was to travel by boat and inspect Breton Island, Tern Islands, Shell Keys, East Timbalier Island, and, for that matter, a few unprotected keys.

Roosevelt always considered Louisiana the “home state” of John James Audubon, so it was fitting to have someone of Miller’s stature for the journey to the offshore islands. Herbert K. Job had ventured down from Connecticut with camera-in-hand, and Roosevelt hoped Job would document federal bird reservations in Louisiana as he had done in Wild Wings for the Florida Keys.

Leaving Edith behind in Pass Christian, the men sailed off on the Royal Tern, pulling a dinghy behind them. The vessel’s hold was crammed with camera equipment instead of guns. The gulf waters looked darker the farther the Royal Tem ventured from shore, and whitecaps slapped against the prow. Gigantic rays leaped from the water and a few devilfish swam along the surface.

“Globular jellyfish, as big as pumpkins, with translucent bodies, pulsed through the waters,” Roosevelt later wrote. The men spotted a loggerhead turtle. To Roosevelt, from a distance, his federal bird reservations looked like long lagoons on the far-off horizon. Meanwhile, sheets of white spray made the crew laugh and scores of black skimmers circled above.

As they sailed deeper into the gulf waters, pelicans plunged into the sea, feeding on schools of mullet in the checkered sunshine. Before long they heard the distant murmur of birds.

“All of this section is now under Government protection,” Parker wrote in Forest and Stream, “and about the middle of June, either late in the evening or early in the morning, one may see the air filled with the white-winged gulls feeding their young on minnows, and even more wonderful, during the heat of the day see some of these small islands, looking at a distance like a wind sheet, since, when the birds are young, the old ones stand over them with outspread wings to protect them both from the sun and the rain.”

The Royal Tern anchored at Breton Island. If Roosevelt hadn’t signed his executive orders, these islands might have been dead zones. Now Breton Island, in particular, gathered in all the bounty of the gulf. Marine life was abundant. William Sprinkle, the reserve’s warden and the captain of the Royal Tern, told his passengers horror stories about the plumers and eggers ransacking the rookeries. Roosevelt took off his shoes in order to tread carefully, wanting to avoid bird nests in the islet’s marshlands, beaches, and brush. Proudly he marshaled facts about the birds. Castaway raccoons, the worst pests of all, had also been removed from the offshore islands by the warden to preserve eggs from robbery.

Busily, Roosevelt scribbled notes in his memorandum book about nighthawks and a small flock of Louisiana heron he had observed. Seizing the moment, Job set up a green shade, very faded, to block out the sun, and started taking magnificent photographs of migrating birds. He blended into the mangrove and gulf tamarisk scrub as if he were an indigenous creature. Miller began telling the life histories of red-winged blackbirds and long-billed marsh wrens, fulfilling his duty as an expert on local wildlife.

For Roosevelt and his companions, those days in the Gulf of Mexico were never-to-be-forgotten. None of the men even thought about stuffing a skimmer or tern — cameras were the order-of the-day.

More than 100 years of protection of bird and marine life is threatened by the toxic BP spill.

Roosevelt’s essay about this gulf cruise, “The Bird Refuges of Louisiana” — published by Scribner’s Magazine in March 1916 — could have been a chapter in Job’s Wild Wings. “The laughing gulls and the black skimmers were often found with their nests intermingled, and they hovered over our heads with some noisy protest against our presence,” Roosevelt wrote. “Although they often — not always — nest so close together, the nests were in no way alike. The gulls’ dark green eggs, heavily blotched with brown, two or three in number, lay on a rude platform of marsh-grass, which was usually partially sheltered by some bush or tuft of reeds, or, if on wet ground, was on a low pile of driftwood.”

Establishing his credentials as an Auduboner, Roosevelt wrote on and on about the offshore breeding grounds. But he had also, foolishly, disturbed a sea turtle nesting area so as to carefully study the eggs. While Job busied himself with the nature photographs on the islands, a New Orleans photographer, J.H. Coquille, took a dozen unforgettable shots of Roosevelt inspecting royal tern eggs, walking barefoot on the beach, sitting like a Buddha contemplating the sea, and sneaking up on pelicans whose pouches were full of sardines. One photograph taken by Coquille showed a huge sign in the background that read: “KEEP OFF: AUDUBON SOCIETY.” Many of the photos accompanied Roosevelt’s article for Scribner’s Magazine. 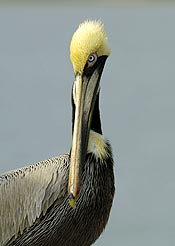 Bill Stripling/Audubon
As the Gulf of Mexico oil spill approaches the Breton National Wildlife Refuge, at least 2,000 pairs of brown pelicans are nesting on islands in the refuge.

Now, more than 100 years of environmental protection of bird and marine life in the Gulf of Mexico is threatened by the toxic BP spill. Crude oil may soon be washing up on the beaches where Roosevelt walked barefoot back in 1915. Since the oil boom in the gulf over the last half-century, the islands — totaling 18,000 acres, only 7,000 of which are above the mean high tide line — have endured many insults, including an oil spill several years ago that killed hundreds of brown pelicans. From 2001 to 2010, due in part to President George W. Bush’s lessening of offshore drilling restrictions, there have been numerous oil-related explosions in the Gulf of Mexico. Nature itself has taken a heavy toll on the refuge, with Hurricane Katrina destroying a lighthouse on Breton Island in 2005 and causing major beach erosion and widespread destruction of vegetation.

Now, perhaps the biggest threat ever is drifting toward Breton Island and its neighbors, endangering one of Teddy Roosevelt’s finest conservation legacies.