Opposition to the mining of Alberta’s tar sands — and the Keystone and Gateway pipelines that would carry their oil to the Gulf of Mexico and Pacific Ocean — has largely been focused on the project’s greenhouse gas emissions and threats to pristine environments along the pipeline rights-of-way.

But another serious issue is coming to the fore — the massive amounts of freshwater being used by the industry. In 2011, companies mining the tar sands siphoned approximately 370 million cubic meters of water from the Athabasca River alone, which was heated or converted into steam to separate the viscous oil, or bitumen, from sand formations. That quantity exceeds the amount of water that the city of Toronto, with a population 2.8 million people, uses annually.

But unlike Torontonians, tar sands companies pay nothing for this water. All they need is a license from the province of Alberta. Nor do they clean it after recycling it and pumping it back into underground aquifers or into tailings ponds, which now cover 170 square kilometers — 66 square miles — of territory in northern Alberta.

‘Nowhere in the world are we seeing this amount of groundwater used for industrial development.’

A growing number of scientists and economists believe the tar sands industry has already reached a tipping point in its dependence on both surface and groundwater. They contend that the timing and magnitude of these diversions are drying up wetlands, disrupting water flows, and potentially threatening riparian habitats thousands of miles downstream along the Mackenzie River basin, which drains 20 per cent of Canada.

“Nowhere in the world are we seeing this amount of groundwater being used for industrial development,” says William Donahue, a freshwater scientist, lawyer, and special advisor to Water Matters, an Alberta-based think tank. “The scale of these withdrawals is massive and totally unsustainable.”

Henry Vaux, a natural resource economist at the University of California, Riverside, and lead author of a recent report on the Mackenzie River Basin by the Rosenberg International Forum on Water Policy, says it’s time that the tar sands industry’s exploitation of water be addressed.

“It’s an alarming scenario,” says Vaux, whose report links heavy water use by the tar sands to potentially harmful changes in the Mackenzie River Basin, including water pollution, wetlands destruction, and changes in drainage patterns in the Mackenzie headwaters. “Given the rate of expansion in the industry, it’s going to get a lot worse.” 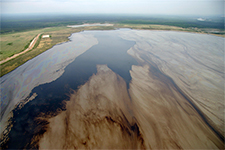 To produce a barrel of oil from the tar sands, the industry says it typically needs between 0.4 and 3.1 barrels of freshwater. In 2008, the tar sands produced 1.31 million barrels of oil per day. That is expected to more than double to three million barrels a day in 2018, further straining water supplies on the Athabasca River and aquifers in northern Alberta. In addition to withdrawing water from other sources, tar sands operations are authorized to divert 652 million cubic meters of water from the Athabasca, double the current volume of withdrawals.

Until several years ago, most tar sands bitumen was obtained through open pit mining, which requires the draining of wetlands, the diversion of streams, the clearcutting of forests, and the removal of soil and overburden. At last count more than 400 square miles of land were being mined in this way. The bitumen-laden sands are then transported to an extraction plant, where hot water is used to separate out the oil.

In recent years, however, in situ mining of tar sands — which involves injecting steam into tar sands deposits too deep to be surface-mined — has escalated. The oil is recovered through an assisted-gravity draining process in which steam and solvents are pumped into the upper portion of the tar sands reservoir. There, the bitumen warms and thins and then drains down into the lower part of the reservoir before being pumped back to the surface.

Open-pit tar sands operations return almost none of the water they use back to the natural cycle because it is toxic and therefore subject to a zero discharge policy. Although a large percentage of the wastewater is recycled, most of it eventually ends up in tailings ponds. Wastewater from in situ processes is routinely re-injected into the deeper aquifers.

The evidence suggests that surface and groundwater supplies are being tainted.

Steve Wallace, head of the province of Alberta’s groundwater management unit, says that the industry’s withdrawal of water from the Athabasca River amounts to about one percent of river flow, although that figure is expected to grow to 2.5 percent as production increases. He acknowledged that this percentage is often much higher in periods of low flow, and a report by the non-profit Pembina Institute said tar sands operations could eventually
consume 25 percent of the river’s water during periods of low flow.

Wallace says that major progress has been made in storing and conserving water in the tar sands region since the provincial government enacted new rules in 2006. One of those rules caps the amount of water the industry can use in times of low flow. Last year, Alberta and the Canadian government announced a joint plan to bolster environmental monitoring of water, air, and terrestrial pollution in the tar sands region by 2015.

Industry and government officials have long contended that the contaminants in the tailings ponds are not leaching into the groundwater, as some scientists, conservationists, and aboriginal leaders claim. But the government of Alberta has an inadequate number of groundwater monitoring wells in the tar sands regions. And as a recent Royal Society of Canada expert panel reported, there is also no regional hydrogeological framework in place to assess the cumulative impacts of the oil sands industry on groundwater quality. 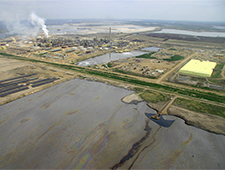 But the evidence suggests that surface and groundwater supplies are being tainted. An internal government memo prepared for Canada’s Natural Resources Minister in June 2012 describes how geoscientist Martine Savard and 18 colleagues detected “potentially harmful, mining-related organic acid contaminants in the groundwater outside a long-established… tailings pond.” In the study, Savard and colleagues suggest that acids may be reaching the Athabasca River in small amounts.

Donahue of Water Matters points out that cleaning up contaminated groundwater is sometimes impossible or prohibitively expensive due to the complexity of aquifers and the dynamic nature of underground channels — something that the U.S. Environmental Protection Agency has learned in attempting to clean up many Superfund sites.

Henry Vaux of the University of California, Riverside suggests that the potential for a collapse, or breach, of one of the tailings ponds dikes is another significant threat.

“One of those dikes is eventually going to let go; there is no such thing as a dike that lasts forever,” he says. “If that happens in the wintertime when the Athabasca River is covered in ice, there is no way of remediating the situation. The polluted water is going to flow a long way.”

In recent weeks, Canadian Natural Resources Ltd. has been unable to stop leaks from an underground oil blowout at an in situ operation. The leak has been contaminating a lake, a forest, and wetlands at its operations at Cold Lake.

‘One of those dikes is eventually going to let go; there is no such thing as a dike that lasts forever,’ says one expert.

In July, Peter Lee of Global Forest Watch Canada and Kevin Timoney of Treeline Ecological Research released a study showing that the province’s records on environmental contamination in the tar sands are incomplete and riddled with errors. Enforcement action, they say, was taken in less than one percent of the more than 4,000 cases where a tar sands facility violated an operating condition.

Water economist David Zetland, who writes the blog Aguanomics, supports the Keystone XL pipeline project because he believes tar sands oil is going to be transported one way or another; the pipeline, he argues, is better than using trucks or trains. But he believes that permitting the tar sands industry to use water for free and allowing companies to reinject polluted water back into the ground or into tailings ponds is a major mistake.

“Those days of abundant [water] supplies are coming to an end, even in Canada,” said Zetland. “The solution is to make people pay for water.”

In an intriguing development earlier this year, a pair of satellites operated by NASA and the German Aerospace Center showed that the tar sands region and a large area downstream of it showed up as a zone of significant water loss. The twin satellites are part of a program known as GRACE, the Gravity Recovery and Climate Experiment, which measures Earth’s gravity field in a way that, among other things, allows scientists to better estimate gains and losses in water storage, including groundwater.

James Famiglietti, director of the University of California Center for Hydrologic Modeling and author of a map of the depletion zone, cautioned that more work needs to be done to determine what is causing the depletion. Among possible causes are the over-use of water by the tar sands industry, but also post-glacial rebound, which is active in the region, as well as declines in groundwater reserves because of climate change. But Famiglietti noted, “If the volume of water used in the oil sands production is as large as is the industry says that it is, it is very likely that the GRACE satellites will detect it.”

Even people associated with the industry are warning of a potential supply shortage as production triples.

Even some people associated with the industry are warning of a potential supply shortage as production triples. Clement Bowman is a former vice-president of Esso Petroleum, a former president of the Alberta Research Council, and one-time research manager of tar sands giant Syncrude Canada. He recently co-authored a paper in which he and his colleagues examined water quantity and quality problems in Canada’s tar sands.

“Water issues, such as large-scale water usage and troublesome polluted water disposal concerns connected to Canada’s oil sands industries, must be resolved,” Bowman and his co-authors say. They conclude that charging for water and trading water rights are the best way to ensure water security for the industry, while balancing environmental and social impacts. The status quo, they write, “does not encourage private companies to develop and employ new technologies related to water reduction.”

The rapid development of Alberta’s tar sands has spawned a proposed 731-mile pipeline that would transport oil to the British Columbia coast. As Ed Struzik reported last year, the project is strongly opposed by conservationists and First Nations leaders, who fear the environmental risks it would bring.READ MORE

Vaux is doubtful that the Albert government will be willing to put a price on water. “People in government and industry go silent the moment you raise the subject,” he points out.

What is needed, Vaux says, are performance bonds in which industry sets aside money to clean up future environmental damage . Vaux also contends that given the piecemeal and often self-regulated system that now exists, the federal Canadian government, the Alberta government, the Northwest Territories, and aboriginal communities downstream need to embrace a coordinated, science-based approach to water management in the tar sands region.

“The issue of water in the Mackenzie Basin is one that does not get enough attention,” he says. “It’s a shame because so much territory is affected by the diversions. It’s not just northern Alberta, it’s a river basin system that supports indigenous people and fish and wildlife habitats all the way to the Beaufort Sea.”

Correction, August 5, 2013: An earlier version of this article incorrectly reported the daily volume of oil production in Alberta’s tar sands region in 2008. The production that year was 1.31 million barrels of oil per day.