The concept of “global weirding” is emerging as a notable complement to its cause, global warming. Coined by Hunter Lovins, a founder of the Rocky Mountain Institute, it describes the consequences of the rise in average global temperatures, which are expected to amplify the abnormal: hotter heat spells, longer and sharper droughts, more violent storms, and more intense flooding.

Given anticipated warming trajectories, many of these physical changes are statistically predictable and can be fairly accurately modeled. But as an ecologist, I fear it is the alterations to the living realm where “weirdness” will be a most apropos, if not downright tepid, label. This is certainly the case in my area of study — the aquatic realm — where global weirding is already well underway.

Forecasted biological changes due to warming often are as rudimentary as plots on maps where a species’ heat tolerances are superimposed on modeled temperature increases. This initial, or “first order,” assessment usually results in calculations of the species’ range shifting poleward — often accentuating actual movements already detected. Thus, if you live north of the equator you may learn that some beetle, bird, or vine is advancing from the south and may be seen in your backyard by 2018. New information, to be sure, but so what? What of its interactions with other organisms, including you? That is, how will it fit in the speedily evolving ecosystem and will it play a new role? And what of the effects of other species deserting locations they’ve long inhabited?

Warming is forcing the planet to launch a giant ecological experiment in which organisms will increasingly interact with other organisms.

In New York’s Hudson River estuary, for example, rainbow smelt historically ran up its many tributaries, where they were enthusiastically netted for food as the first anadromous fish to appear each spring. But as a boreal species at the southern end of its range in a warming river, the Hudson’s rainbow smelt runs faded in the late 20th century, with the last individuals seen in 1998 — part of its general retreat northward from the waters of New York and southern New England.

During the same period, a southern fish — the gizzard shad — invaded the Hudson. Now in spring, this commercially worthless species gluts some of the same tributaries where smelt once ran. Existing in great numbers and biomass, the gizzard shad likely plays a significant but still undefined role in the Hudson, and it has since hopped from river to river as far north as Maine. The size of the ecological “hole” left by the rainbow smelt can only be speculated on. 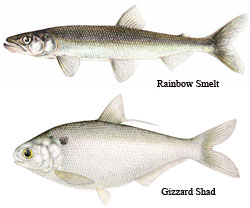 Warming temperatures have caused the rainbow smelt to abandon the Hudson River. It has been replaced by the gizzard shad. NEW YORK DEPARTMENT OF ENVIRONMENTAL CONSERVATION

The next, or “second order,” question of species interactions is far more complex. Ecology is a young field, with basic processes still under investigation and the natural history information needed to minimally understand most creatures woefully inadequate. And yet, warming is forcing the planet to launch a giant ecological experiment in which organisms will increasingly interact with other organisms: Old dependencies will wither, while new contacts among them will emerge. Right now ecologists barely have the knowledge or tools to accurately predict the broader outcomes of changes to the simplest of interactions — between pairs of species.

But ecosystems are made up of myriad possible pairings, many exploitative in some way. Animals consume plants and also each other. The complexities embedded within a reasonably rich ecosystem are mind-boggling. Lake Okeechobee, Florida, has approximately 500 known species, but it is estimated that they engage in about 25,000 exploitative interactions. With warming, we can predict generally that there will be big winners, big losers, and draws among such species, but attempts to accurately predict these changes are far beyond our present capabilities.

A core biological issue with warming is that the very phenologies of plants and animals are changing. Phenology — a somewhat arcane word that, because of warming, is destined to become better known — means the relationship between physical conditions and the timing of ecological events. Lately, even relatively short-term monitoring is showing pronounced shifts towards earlier annual events, such as migrations associated with reproduction. The median nesting date for loggerhead turtles on Florida’s east coast, for example, has advanced 10 days in only 15 years; likewise, far up the Atlantic coast in Maine, the median date of capture of Atlantic salmon and alewife in two rivers has advanced more than a day per year in just 15 years. For both the turtles and the fishes, these advances in timing may create poorer matches to food sources — one more potential stress for species already in sharp decline.

A fundamental conflict underlying phenologies is that some life forms cue their annual life cycles to signals that haven’t changed — such as the northern hemisphere’s spring increase in sunlight — and others to temperature patterns, which are changing. The cumulative effects of changes in these linkages drive “third order” biotic changes — the broad community-wide shifts that are likely to affect the ways in which we live.

How will a shifting species fit in the speedily evolving ecosystem and will it play a new role?

For example, in coastal waters of the northeastern U.S., the algae — or phytoplankton — that support the food chain bloom in late winter and early spring with the stimulus of increasing sunlight. Later, zooplankton that consume the algae ramp up reproduction after being stirred by rising water temperatures. The textbook model of this food chain contains enough of a time-lag between these episodes that the algae bloom reaches dense levels before being cropped by the zooplankton bloom, with excess, dying algae eventually spilling to the bottom as detritus that fertilizes waters deeper than photosynthesis can occur. Without this supplement from above, much of the sea’s bottom waters would be biological deserts.

This process has long supported rich harvests of commercially important ground fishes. But now there is evidence from the northeastern U.S. that the warmer waters allow the zooplankton bloom to occur earlier, shortening the lag following the algae bloom, which yields less detrital rain, at the cost of lessened production of bottom fishes. No one yet knows just how widespread this phenomenon is. But there is indication that top-water fishes have increased at the expense of bottom fishes in the North Atlantic, diminishing traditional fisheries.

A great concern with changes of these kinds is their potential irreversibility. Known as “regime shifts,” these changes often result in “alternative stable states” that resist going backwards. That is, to get back to an earlier state, not only must conditions be returned to what they were when the ecological changes began, but they must go an undetermined distance further back in time to overcome the resilience of the new stable state. Yet where warming is the driver forcing regime changes, the effect of higher temperatures has a forward momentum unlikely to be reversed anytime soon. 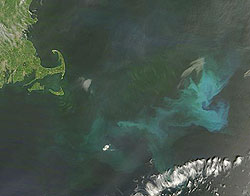 A fine example of regime shifts is in the Baltic Sea, for which the Helsinki Commission conducted analyses of a rich, multi-decadal data set of 75 physical, chemical, and biological ecosystem indicators that show unambiguous changes among alternative stable states. In the 1970’s, the Baltic was cooler and more saline than it is today. In recent years it has moved to a warmer, low salinity ecosystem. What’s striking is not the range of conditions seen in this brackish sea — where fresh and salt waters meet and, thus, variability would be expected — as much as the sheer stability across years once a new state has been reached.

Where the Baltic goes from here is of more than academic interest. Two major commercial fishes in the sea are bottom-dwelling codfish and a mid-water herring, called sprat. Studies show that warmer sea temperatures tend to favor sprat at the expense of cod, but it remains to be seen whether the large-scale climate variations to come — which also influence currents and mixing with North Sea waters — will push the Baltic toward cod- or sprat-dominated systems. But we can be sure that the winner’s identity will be both an outcome and a driver of surrounding ecosystem changes.

Add to this climate-driven “weirding” one more element — the ongoing invasions via human vectors of non-native species, many of which are capable of deleterious interactions with native species, with a few causing profound ecological changes. The U.S. has been woefully ineffective in preventing these colonizations. But our failures do instruct; we should view these additions from afar as lessons, as the equivalent to the sudden appearance of new species in an ecosystem because of warming.

Climate change may be linked directly to the facilitation of invasive species: a worrisome synergy.

A poster species for the seriousness of these invasions is the freshwater zebra mussel in North America. In its native Eurasian range it exists in balance with other aquatic creatures. But in New York’s Hudson River these mussels went from zero to an estimated 550 billion individuals in only two years. Zebra mussels now reduce the river’s phytoplankton by more than eighty percent, an ecological insult that echoes through its food chain, including reducing available food for newly hatched shad and striped bass.

Indeed, climate change may be linked directly to the facilitation of invasive species — a worrisome synergy. For example, it has been shown for sea squirts in Long Island Sound that warm winters provide an earlier start in spring for three non-native species of sea squirts as they settle and claim bottom territory. Warm summers also allow them to grow faster than native species. A maximum of only a three-degree Celsius change caused a 10-fold difference across 12 years in the ratios of native and non-native sea squirts. Sea squirt species changes may seem innocuous (although we don’t really know this), but if responses to warming like these can be extrapolated to other marine invertebrates, greater temperature alterations may strongly upset the “playing field” in the ecological contests between native and aliens species.

Although I focused on what I know best — the marine world — these principles apply equally to the terrestrial realm, with land-based examples being numerous and increasing as more studies are launched. The more we look, the more we find. Norwegian researcher Jöel Durant and his colleagues wrote, “All components of a food chain cannot be expected to shift their phenology at the same rate, and thus are unlikely to remain synchronous.” The implications of this simple statement are forbidding — the biotic scrambling to come will indeed be weird, or worse.