In the spring of 2012, about nine years after Melissa Owen and her husband purchased 640 acres of remote Arizona desert that they hoped to turn into a wildlife refuge, a representative from the energy giant Kinder Morgan knocked on their front door. The man said his company planned to build a natural gas pipeline through her property and hoped to get the Owens’ consent. 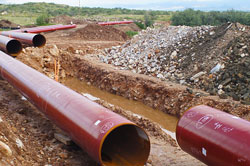 A gas pipeline is being built on Melissa Owen’s land in Arizona, despite her opposition. MELISSA OWEN

They didn’t give it, and the Kinder Morgan visit set off what Owen calls some of the most trying years of her life. Petitions to the pipeline company, local county officials, the U.S. government, and a variety of environmental groups failed to stop the pipeline from earning the necessary permits and gaining access to Owen’s land.

“I’d get up at three in the morning, write letters to the government and Kinder Morgan, and research what I could do, then do my ranch work,” she said. “Then I’d start all over again the next day.”

The rise of new technologies like hydraulic fracturing has opened up vast new stores of both natural gas and oil in the United States, and that, in turn, is driving a boom in new pipeline infrastructure to move the fuels around. The pipelines are entering previously uncharted territories — from rural parts of the West to suburbs in the Northeast — often causing controversy among landowners, local governments, and clean-energy advocates.

The pipelines are entering previously uncharted territories, from the rural West to Northeast suburbs.

In some cases, the opposition is philosophical. Activists opposed to the oil and gas industry argue, for example, that building thousands of miles and billions of dollars worth of new pipeline infrastructure effectively locks the U.S. into many more decades of fossil fuel development at a time, they say, when it should be transitioning to cleaner forms of energy.

But for others like Owen, the concerns are more local. They complain that state and federal regulators are often too quick to approve new projects that come with real risks. In the case of petroleum pipelines, for example, an accident can coat the land with hard-to-clean viscous oil that takes years to clean up. With gas pipelines, some worry about the cumulative effects of methane leaks, which can significantly worsen air quality and compound global warming. Gas pipelines are also highly pressurized, generating concerns about explosions.

“You have the perpetual harms of the pipelines themselves, and the fact that pipelines encourage and induce more oil and gas extraction,” said Maya van Rossum, the head of the Delaware Riverkeeper Network, a nonprofit that is campaigning against several pipelines in the Delaware basin. “The fact that an agency looked at the projects and said they’re okay doesn’t mean they’re not harmful.”

But industry supporters argue that as long as the U.S. is reliant on cheap and plentiful natural gas and oil, new pipeline infrastructure will need to be built. No other method of transporting these liquids, they say — whether by truck or barge or rail — is as safe, efficient, and environmentally friendly as pipelines.

“There’s a federal regulator, and they look at what’s in the public interest for every project.” said Catherine J. Landry, a spokeswoman for the Interstate Natural Gas Association, a trade group. “But industrial action, whether it’s a highway or an airport — some local people are not going to be happy that it’s happening in their area.” 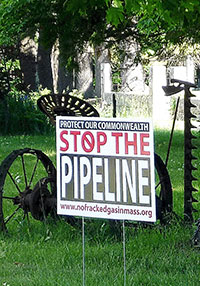 Both oil and natural gas production had been in decline in the U.S. for decades before hydraulic fracturing and horizontal drilling techniques allowed companies to plumb deep shale formations that had previously been unreachable. Since then, natural gas production has increased by 20 percent, and it is expected to more than double in areas like Pennsylvania and Ohio over the next ten years. Similarly, oil production, which had been on the decline in the U.S. since the 1980s, shot up by nearly 50 percent between 2008 and 2013.

Those shale booms — in Appalachia, North Dakota, and elsewhere — now have pipeline builders playing catch-up. Today, more than 1.5 million miles of natural gas pipeline pass beneath city streets, highways, parkland, and waterways — and more than 100,000 miles of that was added just between 2002 and 2012, according to the U.S. Department of Transportation. Oil pipelines are booming, too, with 25,000 miles added to a 190,000-mile network in the last decade.

Environmentalists have been opposing some of these pipelines, most notably the planned Keystone XL, which would deliver crude oil extracted from Alberta’s tar sands to the U.S. Gulf Coast. Other pipelines are also stirring controversy. These include the Northeast Energy Direct Project, which would deliver gas from the Marcellus formation in the eastern U.S. to New England; a newly proposed $5-billion project from Duke Energy and Dominion to deliver gas to North Carolina; and two new pipeline projects that would help deliver crude oil from the Bakken region in North Dakota to transfer points in Illinois and Oklahoma.

Gas pipelines that cross state boundaries are overseen by a patchwork of agencies, but all must be approved and permitted by the Federal Energy Regulatory Commission (FERC). Since 2006, FERC has received 803 applications for pipelines and related infrastructure. Of those projects, 451 have been authorized, 98 are pending review, and 258 have been denied or withdrawn, according to a FERC spokesperson. The agency could not provide a breakdown of how many of those 258 projects were denied or voluntarily withdrawn.

‘I have serious concerns that this process of community engagement is a sham,’ an activist in New Jersey says.

“We engaged in good faith believing this process was legitimate,” said Barbara Blumenthal, the head of the Princeton Ridge Coalition, which opposed a proposed pipeline through an environmentally sensitive area in New Jersey. FERC found in August that the pipeline did not pose any significant environmental threats. “Now I have serious concerns that this process of community engagement is a sham,” Blumenthal said.

In an email, however, FERC spokeswoman Tamara Young-Allen pointed to a 2012 U.S. Court of Appeals judgment, which found that a high rate of pipeline approvals wasn’t necessarily indicative of a lax regulator, but rather a sign that bad projects were being weeded out of the process at earlier stages. “By the time applicants and their expert counsel have worked through changes, adaptations, and amendments,” the court’s decision read, “they are not likely to pursue many certificates that are hopeless.”

Still, the agency has been scolded by the courts in other cases, including last June, when a federal appeals court agreed with environmental groups that it had sidestepped federal environmental law in approving a natural gas pipeline project in New Jersey. The court found that FERC had “impermissibly segmented the environmental review” in violation of the National Environmental Policy Act.

The construction of interstate oil pipelines is not subject to FERC oversight at all, leaving approvals and environmental reviews largely to state and local government agencies. But once installed, the safety of both oil and gas pipelines is overseen by the federal Pipeline and Hazardous Materials Safety Administration (PHMSA), which tallied 623 leaks and accidents along oil and natural gas pipelines in the U.S. last year. Ten deaths and about 50 injuries were logged. Since 1994, 387 people have been killed in pipeline accidents, including high-profile ones like the 2010 explosion underneath a San Francisco suburb that killed eight people and leveled several homes.

Pipelines are responsible for nearly half of the oil spilled in the U.S., according one analysis.

The Environmental Protection Agency has found that gas pipelines account for as much as 10 percent of the industry’s fugitive methane — a greenhouse gas nearly 20 times more potent than CO2. And there have been several high-profile oil pipeline accidents, including the 2010 rupture of a pipeline in Michigan that dumped more than one million gallons of Canadian bitumen into the Kalamazoo River.

The cumulative impacts of these spills are unknown, but according to one analysis, pipelines are responsible for nearly half of the oil spilled in the U.S. In a report published last May, the DOT’s inspector general criticized the agency for poor and outdated oversight of state pipeline inspection agencies, which the report suggested were frequently understaffed and inadequately trained.

Still, an analysis of DOT accident data last year by the conservative Manhattan Institute suggested that, statistically speaking, pipelines are markedly safer than rail or truck for moving fuels. “Americans are more likely to get struck by lightning than to be killed in a pipeline accident,” the authors of that report noted.

DOT records do show a 4,000-percent increase in the number of rail cars carrying oil on U.S. tracks over the last five years, leading to a steep increase in accidents. More oil spilled last year from railroads than in the preceding four decades, according to a recent analysis of DOT records by McClatchy DC. In the most widely publicized accident, a train carrying oil from the Bakken formation derailed in 2012 in the town of Lac-Mégantic, Canada. The subsequent explosion killed 47 people and destroyed half of the downtown area.

The technology to liquefy and move natural gas by train or truck is still in its infancy — and such transport remains prohibited by federal law. But natural gas suppliers, citing the lack of pipeline infrastructure for a booming industry, are beginning to push hard for alternatives.

Environmental activists, however, argue that the choice between fossil-fuel-carrying pipelines or trucks or trains is not one that Americans necessarily need to make.

“We’re not buying the false proposition that the industry likes to put out there,” said van Rossum of the Delaware Riverkeeper Network. “It shouldn’t be a choice between how you ship the gas. We should be choosing how you fuel your energy future.”

In the meantime, communities and landowners like Melissa Owen will be encountering new pipeline infrastructure projects in greater number. Owen, who faced possible eminent domain proceedings, says she eventually took a payment from Kinder Morgan in exchange for the use of her land, though she can’t disclose the amount because of her contract with the company. A construction crew arrived on her property in July.

“They’ve cleared a 100-foot swath of my ranch a mile long. They’ve dug this deep trench,” she said. “We thought at some point someone would say, ‘This is absurd.’ But now we’ve just given up hope.”