On the southeastern outskirts of Washington, D.C., inside the Smithsonian Institution’s cavernous Museum Support Center, one can see some frogs that no longer exist. Alcohol-filled glass jars hold preserved specimens of Incilius periglenes, the Monte Verde golden toad; the Honduran frog Craugastor chrysozetetes, which in life was olive-brown with purple palms and soles; its Costa Rican cousin, Craugastor escoces; and Atelopus ignescens, a black toad not seen in the wild for decades.

All of these extinct species are likely victims of the fungus Batrachochytrium dendrobatidis, which attacks the outer skin layers of amphibians, disrupting their water and electrolyte intake so severely that infected animals can die of cardiac arrest. The fungus, known familiarly as Bd, has been found in more than 500 species of amphibians in 54 countries to date, most recently in Asia. Some areas of Central America have lost more than 40 percent of their amphibian species to Bd infection.

Karen Lips, a University of Maryland herpetologist who has watched Bd march through Central American amphibian populations for almost 20 years, says no amphibian is safe: “We live in a Bd world now,” she says. 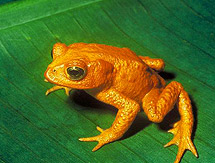 USFW
The BD fungus has been found in more than 500 species of amphibians, including the Panamanian golden toad.

Bd is just one of several modern-day eruptions of fungal disease. White-nose syndrome, first observed in North American bats in New York State in early 2007, is thought to be caused by the fungus Geomyces destructans, and the disease is estimated to have killed well over a million cave-dwelling bats and has now spread to 19 states and four Canadian provinces. Biologists describe the epidemic as the most dramatic decline of North American wildlife in living memory.

Fungal disease also appears to play a key role in colony-collapse disorder, the recent and sudden dieoff of North American bees: Scientists posit that the bees are weakened and killed by multiple factors, including a one-two punch from a virus and a fungal parasite. In the Caribbean, a fungus called Aspergillus sydowii has contributed to the precipitous decline of coral reefs, sweeping through populations of sea fans weakened by rising ocean temperatures.

And in the Pacific Northwest and British Columbia over the past decade, a new and virulent strain of the fungus Cryptococcus gattii, which attacks the lungs and nervous system, has killed more than 30 people, and infected dogs as well.

Many researchers have noticed the number and severity of these emerging fungal diseases. “I think there’s absolutely no question that there’s been a huge increase in fungal infections,” says Joseph Heitman, a microbiologist at Duke University Medical Center who studies Cryptococcus gattii.

As humans move faster and farther around the world, fungi of all kinds are landing in new habitats.

The reasons for the trend are multifold, Heitman and other researchers say. Fungal spores, which are more durable and long-lived than bacteria or viruses, can easily hitch rides on humans. As humans move faster and farther around the world, fungi of all kinds are landing in new habitats: Geomyces destructans, which is present but not lethal in European bat populations, was likely transported across the Atlantic by humans, even though it seems to spread more often from bat to bat.

Unlike bacteria and viruses, fungi can also reproduce sexually, allowing fungi that encounter each other in new habitats to easily recombine into novel, potentially more virulent strains. Cryptococcus gattii, which began to infect people in British Columbia in 1999 and has since moved south into the U.S. Pacific Northwest, may be a recombination of tropical fungal strains that moved north on imported ornamental plants or soil.

This sort of fungal mischief has long been recognized in food crops and other plant species, and fungal disease outbreaks continue to threaten food supplies. But in recent decades, fungal diseases have also taken a severe and growing toll on wildlife. “Fungi have driven more animal species extinct than any other class of pathogens by quite a long way,” says Matthew Fisher, an epidemiologist at Imperial College in London. Fisher and his colleagues calculate that fungi have caused more than 80 percent of known disease-driven animal extinctions. (Viruses, by comparison, are responsible for only 1 percent.) The vast majority of these fungi-driven extinctions have happened in the past 20 years. The first proven victim, Fisher says, was a captive population of Polynesian tree snails, wiped out by fungal disease in a London zoo in the 1990s.

This lethal pattern is partly explained by the independence and flexibility of fungal species: Unlike viruses, they don’t usually depend on their hosts for survival, and unlike both viruses and bacteria, which tend to be more specialized, they can quickly switch to new hosts. For example, Geomyces destructans can survive in cave sediments before infecting healthy bats. In some caves in the northeastern United States, more than 99 percent of resident bats have died from white-nose; the fungus, however, continues to thrive and spread.

Climate changes may stress species of all kinds, making them less able to resist and recover from infection.

Climate change may also be contributing to the spread of fungal diseases in wildlife populations. There are estimated to be more than 1.5 million species of fungi worldwide, but only about 150 infect mammals. Arturo Casadevall, a professor at the Albert Einstein College of Medicine, gained notoriety a few years ago for suggesting that warm-bloodedness — an energy-expensive life strategy — protected early mammals from heat-intolerant fungi and led to their global rise. But as average global temperatures ratchet up, Casadevall hypothesizes, fungi may adapt to warmer temperatures and mammals may lose their body-temperature advantage.

Climate changes may also stress species of all kinds, making them less able to resist and recover from infection. “Fungal diseases really haven’t been on our radar screen,” says Casadevall, “but as you raise the temperature, I think they’re going to become completely formidable.”

The Centers for Disease Control are heavily involved in research on the Cryptococcus gattii outbreak, and there are various efforts underway to mitigate disease-driven damage to amphibian, bat, and bee populations. In late August, scientists at Oregon State University reported that a species of freshwater zooplankton will eat the Bd fungus and could serve as a biological control. Another group of biologists, based at the University of Zurich, recently found that some bacteria, when applied directly to amphibian skin in the laboratory, can block the attack of Bd. Bat researchers in the northeastern United States have found that bats in cooler caves are more likely to survive; it’s possible that humans could alter airflow in mines and other artificial habitats to provide some refuge for bats.

Recognizing and containing fungal diseases before they gain a foothold is another matter, however. Decades of work by organizations such as the United Nations Food and Agriculture Organization, along with research by agribusiness, have developed some methods of identifying and controlling plant fungal diseases. But Fisher points out that even New Zealand, which has an unusually sophisticated biosecurity system, was not able to protect its amphibians from the Bd fungus.

“We’re importing so much from all kinds of locations, and there’s almost no screening done,” says Heitman. “And some of the methods we do have for screening, such as molecular testing, are just not practical.” He imagines testing truckloads of imported Canadian Christmas trees for evidence of Cryptococcus gattii, and sighs. “We’ve created a global economy, and there are advantages to that. The disadvantage is that it’s a huge mixing pot.”