As sea ice rapidly melts in the Arctic and parts of Antarctica, the threat to creatures that use the ice as a feeding platform — polar bears and walruses in the Arctic, and AdÃ©lie penguins in the Antarctic — has been well publicized.

But these iconic symbols of global warming are merely the pinnacle of polar marine ecosystems whose foundations rest, above all, on one thing: the widespread, seasonal formation and retreat of sea ice. And as temperatures rise in the Arctic and along the Antarctic Peninsula faster than anywhere else on earth, evidence is growing that the sea ice’s retreat is altering a food chain that supports a wide array of marine life, from single-celled phytoplankton to gray whales.

This intricate web of life — whose annual cycle of reproduction is kick-started every spring and summer by the retreat of sea ice and ensuing phytoplankton blooms — is facing profound shifts in that timing, upending many long-established interactions. Some creatures will benefit from the shifts, and others will lose. But one thing is certain: Many forms of polar marine life that have evolved over millions of years to live in a relatively stable, sea-ice dominated world are now facing a new, swiftly changing reality.

Creatures that have evolved over millions of years in a sea ice-dominated world are facing a new reality.

“These ecosystems are very sensitive to sea ice changes and if you change that equilibrium you might end up with a totally different ecosystem,” said Martin Montes-Hugo, an oceanographer and remote sensing expert at the University of Quebec who has studied the impact of sea ice declines on themarine food web along the western Antarctic Peninsula.

The changes in the Southern Ocean in that region are indicative of the cascade of events that ripple through polar oceans as sea ice melts. Winter air temperatures along the northwestern Antarctic Peninsula have risen by 11 degrees F in the past 60 years, and sea surface temperatures have risen by about 1 degree F — a slight but significant change. As a result of these increases, sea ice now blankets the Southern Ocean off the western Antarctic Peninsula nearly three fewer months a year than 30 years ago.

For eons, the marine world in this region has come to life every spring as sea ice retreats, exposing the ocean to the sun’s rays. Marine algae, or phytoplankton, trapped in the ice and floating in the water column have burst into life as the sun catalyzes the photosynthetic process. In addition, melting freshwater from the sea ice formed a buoyant cap atop the heavier salt water, trapping the algae in the upper layer of the ocean, where it was exposed to the sun’s rays and bloomed.

These seasonal phytoplankton blooms have fed the entire food web around Antarctica: shrimp-like krill and fish ate the phytoplankton, and virtually everything else — from AdÃ©lie penguins to humpback whales — ate the krill, which are part of the crustacean family.

Now, however, Montes Hugo and his colleagues are detecting major changes at the base of the food chain — the phytoplankton — that appear to be working their way up to top predators, including AdÃ©lie penguins. Using various records — including satellite-based remote-sensing technology that measures the chlorophyll (an indication of phytoplankton) in the water — Montes-Hugo compared phytoplankton production during two periods: 1978 to 1986, and 1998 to 2006. Over those three decades, he concluded, phytoplankton production declined by nearly 90 percent in the northwestern Antarctic Peninsula. 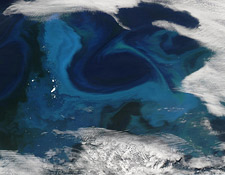 NASA
A satellite image shows a phytoplankton bloom in the Southern Ocean, which surrounds Antarctica.

Montes-Hugo says the main reason for the drop is the sharp decline of sea ice during that same period. Less sea ice has meant two things. First, it has reduced the size of the freshwater layer that kept phytoplankton trapped in the upper layer of the Southern Ocean, where they bloomed when exposed to sunlight. Second, the region’s nearly three-month decline in sea ice duration means that the ocean’s surface is more exposed to winds, which stir up the water and mix the upper layers with lower layers. The upshot is that phytoplankton blooms have been sharply reduced as the algae are driven deeper into the water column, where they are not exposed to the bloom-producing energy of the sun.

The decline in phytoplankton is believed to be a major reason for a regional decrease in Antarctic krill. And that loss of krill, coupled with the shrinking of the sea-ice that AdÃ©lies use as a feeding platform in winter, is a major reason why AdÃ©lie penguin populations in the northwestern Antarctic Peninsula have plummeted by more than 80 percent in the last 35 years.

Farther south on the Antarctic Peninsula, where temperatures are considerably colder, warming has had the opposite effect. Previously, the more southerly waters off the Antarctic Peninsula were covered in extensive sea ice nearly year-round, inhibiting phytoplankton growth. But as the region has warmed and sea ice has retreated, the growing expanses of open water have actually led to an increase in phytoplankton production of more than 60 percent, which may well boost production of krill and the creatures that feed upon them.

Hugh Ducklow, who heads the National Science Foundation’s Long Term Ecological Research program on the Antarctic Peninsula, said he and his colleagues are observing another important change related to the loss of sea ice. Ducklow, a biological oceanographer who is director of The Ecosystems Center at the Marine Biological Laboratory in Woods Hole, Mass., said that Antarctica has long been characterized by a relatively simple marine ecosystem with few links in the food chain, which is dominated by large species at every level. A large type of phytoplankton, called diatoms, has prevailed, as has the large Antarctic krill.

‘There is definitely large-scale ecosystem change, and where it’s heading, nobody knows,’ says one expert.

Now, however, Ducklow said that smaller phytoplankton — which Antarctic krill do not customarily eat — are becoming more prevalent, which he says is related to rising water temperatures and changes in ocean stratification. In addition, researchers in the region are finding that Antarctic krill are beginning to be replaced by a creature known as a salp — a clear, barrel-shaped, jellyfish-like tunicate that is 99 percent water and therefore has little nutritional value. These developments, said Ducklow, could bode ill for the penguins, seals, and whales so dependent on Antarctic krill.

“This indicates fundamental changes in the food chain as a result of the loss of sea ice,” said Ducklow.

Added Montes-Hugo, “There is definitely large-scale ecosystem change, and where it’s heading, nobody knows.”

In the Arctic, where sea ice is retreating rapidly across nearly the entire Arctic Basin, scientists are detecting significant changes in phytoplankton blooms and in the many creatures that depend on those blooms for sustenance. Since 1979, summer sea ice extent in the Arctic Ocean has declined by a third, and thick, multi-year sea ice is swiftly giving way to thin, year-old ice.

Kevin Arrigo, an oceanographer and biogeochemist at Stanford University, conducted a study showing that from 1998 to 2009, phytoplankton production increased by 20 percent in the Arctic. The study also showed that the number of ice-free days in the Arctic Ocean increased from 87 to 132 in just 13 years, which lengthened the phytoplankton growing season.

But this spurt in phytoplankton growth caused by the ice retreat is not universally good news for the Arctic Ocean ecosystem and the marine mammals and seabirds that inhabit it. Since phytoplankton blooms generally peak about two weeks after sea ice retreats, the earlier blooms mean that whales and seabirds that have long timed their arrival in the Arctic to coincide with the peak of zooplankton, whose populations eat phytoplankton, may find that they have arrived too late, at a time of declining food resources. 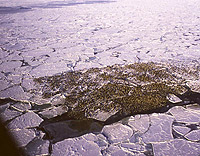 “There have been huge changes in timing, and animals that time their reproduction to coincide with the big phytoplankton blooms, they are going to be at a disadvantage now,” said Arrigo. “If you’re a gray whale migrating north, and the phytoplankton bloom is happening 20 days earlier, and you want to feed on krill and invertebrates whose population growth is fueled by phytoplankton productivity, that’s not a good thing.”

One recent study showed that peak phytoplankton blooms in some parts of the Arctic Ocean had advanced in recent decades by up to 50 days — a huge change for creatures that, over millennia, had evolved to arrive in the Arctic at a moment of maximum foraging opportunities. This search for optimum foraging periods may explain why a number of marine mammals, including gray whales, are now moving into new, more northerly Arctic ranges.

This issue of timing is a key one for many species in an era of global warming, when everything from butterflies to birds to whales may find themselves out of sync with an environment that is rapidly changing. Scientists have a name for this phenomenon — the match-mismatch dynamic.

In the Arctic, scientists are also beginning to understand that retreating sea ice will often favor one set of species over another. In the northern Bering Sea and the Chukchi Sea, Jacqueline Grebmeier, an oceanographer at the University of Maryland’s Center for Environmental Science, and her colleagues have been studying this phenomenon. What they have found is that disappearing sea ice is clearly bad for a mix of species — spectacled eiders, walruses, and bearded seals — that depend on sea ice as a resting platform to access a rich sea bottom, or benthic, ecosystem of clams to survive.

At the same time, the loss of sea ice appears to be a boon to some fish and whale species, such as bowhead whales, that make their living in the middle and upper layers of the ocean.

The reason for this shift is relatively straightforward. Earlier, when sea ice covered more of the ocean for a longer period of time, cold waters and the late retreat of sea ice tamped down populations of the zooplankton that feed on phytoplankton. As a result, when phytoplankton finally bloomed, most of that algae was not eaten by zooplankton and drifted down to the bottom, where it nourished a thriving community of clams and other bottom-dwelling organisms. Spectacled eiders and marine mammals gorged on this bounty resting on the bottom in the shallow waters of the continental shelf.

Now, however, Grebmeier says that warmer waters — sea surface temperatures in parts of the Arctic Ocean have increased by up to 3.5 degrees F in 30 years — and longer-ice-free periods have given rise to large populations of zooplankton, which then consume the phytoplankton before they can reach the sea bottom. As a result, clam populations have declined in many parts of the northern Bering and Chukchi Seas, which has taken a toll on birds and mammals higher up the food chain, such as spectacled eiders. Populations of spectacled eiders that nest in North America have declined by 50 to 90 percent in many parts of the Chukchi Sea, studies show.

These widely varying impacts show the complex interplay occurring among species as polar ecosystems respond to a level of warming unprecedented in recent geological time. “We’re starting to understand how this warming and retreating sea ice is affecting individual populations and species,” said Scott Doney, a marine geochemist at the Woods Hole Oceanographic Institute. “But how it cascades through food webs is really an open question.”