In the spring of 1995, the U.S. Fish and Wildlife Service captured several wolves from west central Alberta and set them loose the next year in Yellowstone National Park, hoping they would fill in the missing link in the park’s complex system of predator-prey relationships.

Wolves hadn’t been seen in Yellowstone in 70 years. Beyond anyone’s wildest expectations, and despite fierce opposition of some local ranchers and hunters, these and other wolves brought in from Alberta and British Columbia adjusted extremely well. Today, 11 packs, with nearly 100 wolves, are thriving in Yellowstone.

The fortunes of wolves in west central Alberta, however, have moved in a completely different direction. Over the past five years, the government of Alberta has spent more than $1 million poisoning wolves with strychnine and shooting them from the air. In all, more than 500 wolves in the Little Smoky River region have been destroyed in a controversial effort to save woodland caribou, whose numbers have plummeted as the oil, gas, and logging industries have increasingly carved up Alberta’s boreal forest in recent decades.

The continuing expansion of the tar sands will further destroy caribou habitat.

The killing of wolves in Alberta is not going to end any time soon. Indeed, if some wildlife managers get their way, the predator control program could be expanded to include several other areas of the province, including the heavily mined tar sands region, where four caribou herds are being squeezed by the massive, multi-billion dollar oil mining operations. Two of those herds are already at risk of disappearing if their habitat is not restored soon, according to the Alberta Caribou Committee, which is charged with helping recover caribou populations. All told, tar sands deposits in Alberta underlie 54,000 square miles — an area the size of New York State — and while only a small portion of this is currently being developed, the continued expansion of the tar sands will further destroy caribou habitat.

In its latest report, the Alberta Caribou Committee notes that three of the province’s 18 herds are at immediate risk of disappearing because of loss of habitat. Six are in decline, three are stable, and not enough is known about the remaining six to determine how well they are doing. Scientists are confident, however, that they are in decline as well, further fueling efforts to protect caribou by eradicating wolves.

“Wolf control can be an effective way of conserving dwindling caribou numbers,” says Stan Boutin, a University of Alberta biologist who has spent more than 20 years trying to prevent caribou from disappearing in the province. “But the province is kidding itself if it thinks that wolf control alone is the answer. It’s not.”

The answer, according to nearly every scientist involved in the debate, is habitat protection — something that has not been high on the list of the Alberta government as it has pushed energy development in the tar sands region and throughout the province. 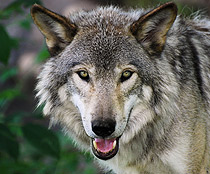 iStock
In the last five years, Alberta has spent more than $1 million poisoning wolves and shooting them from the air.

Alberta officials have defended the killing of wolves in regions where woodland caribou numbers have plummeted, yet these officials acknowledge that preserving habitat is essential.

“Scientists recognize that wolf control is a legitimate means of managing caribou populations that are in trouble,” said Darcy Whiteside, spokesman for the Alberta Sustainable Resources Department. “This is definitely needed to save that [Little Smoky River caribou] population. It has definitely stabilized that population. However, we also recognize that it is only a short-term solution and that habitat protection is key to saving caribou in the long run.”

Wolves have long been used as scapegoats for wildlife management problems. For much of the 20th century, the U.S. and Canadian governments systematically targeted wolves. Initially, wildlife managers used bounties to encourage people to kill wolves. Then they used poison, leghold traps, and marksmen from helicopters to wipe out the predators. In extreme cases, such as in northern Minnesota, men were sent to dig out dens and strangle wolf pups.

Sometimes, these predator control programs worked too well, as in Yellowstone and Banff National Park in the Canadian Rockies, where wolves also were completely extirpated. (They have since come back to Banff, albeit in small numbers). Most times though, the programs failed because biologists underestimated just how quickly a wolf population can rebound as long as there is prey for them to exploit.

Scientists have long warned about the consequences of fracturing old growth forest.

These heavily criticized wolf eradication programs were discontinued almost everywhere in North America — except in Alberta and Alaska. The only difference now is that wildlife managers think they have a better handle on how to make wolf control programs work: Kill at least 60 percent — 80 percent is preferable — of the wolves in an area, according to the formula that most predator control experts rely on, and you begin to see a rebound in prey species after several years, as long as there is suitable habitat in which the species can recover.

The issue in Alberta is much different than in Alaska, where wolf control is done largely to enhance hunting opportunities for caribou. Because of intense logging and oil and gas development in Alberta, there is too much good habitat for wolves and not enough for caribou. That may sound strange, but in the unprotected areas of Alberta the old growth forest that used to support moderate numbers of wolves and caribou is increasingly being carved up. At last count, 34,773 wells, 66,489 kilometers of seismic lines, 11,591 kilometers of pipelines, and 12,283 kilometers of roads had been built in caribou country in west central and northern Alberta. That doesn’t include the vast areas of forest that have been logged.

Open areas such as these favor moose, elk, and especially deer. As the number of these creatures expand, so do the number of wolves. More often than not, caribou, which rely on old growth forests for lichen and predator protection, are nothing more than passing targets as wolves move easily from one clear cut to another through the shrinking old growth forest.

For more than two decades, scientists have been warning the Alberta government about the consequences of fracturing old growth forest in this way. The latest to weigh in on this issue was a team of 30 boreal forest scientists commissioned by the Canadian government to review the data and habitat conditions of caribou in Alberta. In 2008, they recommended that cut lines, well sites, and roads that favor wolves need to be reforested if caribou are going to have a chance of surviving in oil and gas country.

Wildlife experts say killing wolves makes no sense if habitat is not restored.

The Canadian government, which is ultimately responsible for the country’s endangered species, deferred taking action, claiming that not enough is known about the “spatial distribution” of caribou to warrant identification of critical habitat. But then last August, the federal government came up with a recovery plan that opened the door for the wolf control program in Alberta to continue. Noting that “human-induced habitat alterations have upset the natural balance between boreal caribou and their predators,” the report said that wolf eradication programs “will be required… to stabilize individual local populations in the short term.” In the long term, the report said, caribou populations can only be self-sustaining if their habitat is preserved.

Lu Carbyn, scientist emeritus with the Canadian Wildlife Service and adjunct professor at the University of Alberta, has been studying wolves in North America for more than 40 years. While he is not a big supporter of predator control programs, he says they can be a very effective way of reviving ungulate populations that are under stress. But Carbyn believes there is no sense killing wolves if habitat is not restored in highly disturbed oil and gas regions.

University of Alberta biologist Boutin notes that no matter how many wolves have been killed in the territory of the Little Smoky caribou herd, the wolves keep bouncing back. “They’re spending an awful lot of money killing a lot of wolves in order to keep a handful of caribou calves alive,” said Boutin. “Sooner than later, this strategy is going to fail them.”

Boutin; Richard Schneider, executive director of the Alberta Center for Boreal Research; and University of Alberta natural resource economists Vic Adamowicz and Grant Hauer have estimated that it would be possible to preserve half of Alberta’s caribou habitat while giving up less than 1 percent of potential revenues from resource development.

Recently, criticism of wolf eradication programs has come from an unexpected source — Bob Hayes, a biologist who led the Yukon government’s wolf control programs in the 1980s and 1990s. By his own count, Hayes has killed 851 wolves and sterilized many others in the name of science and conservation biology. Despite sharp professional disagreements, hate mail from environmentalists, and threats from eco-terrorists, Hayes says he has never doubted that he was doing what needed to be done to protect caribou, moose, and other prey species in the Yukon Territory.

But Hayes, author of Wolves of the Yukon, now believes that wolf eradication programs merely buy time and do little to address the real reason why ungulates are in decline. “I spent 18 years studying the effects of lethal wolf control on prey populations,” says Hayes. “The science clearly shows killing wolves is biologically wrong… When we kill wolves, we’re killing the very thing that makes the natural world wild.”