We were bobbing just south of the Bosphorus, where the straits open to the Marmara Sea. Onshore, were Istanbul’s iconic monuments — the Blue Mosque, the Topkapi Palace, the Aya Sofia — and in the water was a pod of bottlenose dolphins. Two dorsal fins broke the surface, then a few gray backs arched up, gleaming in the sun. One shot into the air, pale belly flashing briefly. “It’s the resident group,” said Aylin Akkaya, a biologist with Istanbul University who studies the city’s dolphins. “They’re surface feeding.”

A motorboat appeared and roared toward the pod. Collisions between boats and dolphins are not uncommon, but this time, the animals simply vanished. They resurfaced, a few hundred meters away, among the tankers and cargo ships that dot the Marmara. Then they disappeared. 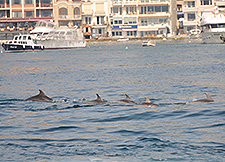 A pod of dolphins travels through the heavily developed Bosphorus Strait. AYLIN AKKAYA

Istanbul’s waters once teemed with marine life: swordfish, sea turtles, even Mediterranean monk seals. Monk seals have vanished from local waters, as have abundant fish populations. But remarkably, in one of the world’s busiest waterways, several species of cetacean remain. In addition to bottlenose dolphins, the Bosphorus is home to rarely seen common dolphins and shy, diminutive harbor porpoises, some residing in the straits year-round, others following the fish migrating from the Mediterranean to the Black Sea.

But all of these cetacean species are now classified as endangered or vulnerable, as Turkey’s rapid coastal development and rampant overfishing pose existential threats to populations of dolphins and porpoises that once were among the largest in the world. The plight of Turkey’s marine mammals is emblematic of a larger problem, scientists and conservationists say: The government of Prime Minister Recep Tayyip Erdogan is aggressively pursuing economic development at the expense of the environment. This is a key factor behind the recent protests attempting to prevent the Erdogan government from developing Istanbul’s Taksim Square and razing hundreds of sycamore trees in adjoining Gezi Park.

“The laws to protect the environment from unchecked construction and development have been systematically undermined in order to allow grand, government-favored projects to go ahead without effective controls or regulation, and with no regard for human and environmental considerations,” Pinar Aksogan, a campaigner for Greenpeace Turkey, recently wrote in the Guardian.

The travails of cetaceans in the Black and Mediterranean seas began long before the Erdogan government took power a decade ago. In the Black Sea — which connects to the Aegean Sea through the Bosphorus, the Sea of Marmara, and the Dardanelles — an estimated 6 million dolphins and porpoises were killed in the 20th century, according to the Agreement of the Conservation of Cetaceans of the Black Sea, Mediterranean Sea, and Contiguous Atlantic Area, or ACCOBAMS.

Turkey banned the killing of cetaceans in 1983, but scientists from ACCOBAMS and Turkish universities say that a host of other threats continue to batter populations of dolphins and porpoises in Turkish waters and the Black Sea. These include severe overfishing of prey species, entanglement in fishing gear, underwater noise from a burgeoning number of boats, coastal pollution that can interfere with the reproduction of cetaceans and foster disease outbreaks, and habitat loss due to Turkey’s dizzying pace of tourism development along its coast. 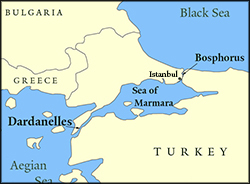 Populations of dolphins and porpoises now are endangered or threatened in the Black Sea, the Bosphorus Strait, the Sea of Marmara, and the Dardanelles. YALE ENVIRONMENT 360

The population of Istanbul has soared from 1.5 million in 1960 to 13.5 million today. Turkey’s population has tripled in that time to 74 million, and the number of tourists visiting the country has risen 26-fold in the past three decades, jumping from 1.2 million in 1980 to 32 million last year. That tourist boom has led to the sprawling, uncontrolled development of hotels and commercial infrastructure along much of Turkey’s coastline.

In the Bosphorus, which separates Europe from Asia, pod sizes of dolphins and porpoises have decreased significantly in recent years, according to Ayhan Dede, a marine biologist at Istanbul University. Even the larger pods of the 1980s and 1990s were but a shadow of the vast schools of cetaceans that plied the Bosphorus a century ago.

Experts say that Turkey’s cetaceans are in dire shape and that swift government action is needed to create protected areas where dolphins and porpoises reproduce and most commonly feed. “If they’re not given proper protection soon,” says Akkaya, “they could be gone within 20 or 25 years.”

But Akkaya and others say that conservation is low on the list of priorities of the Erdogan government. In its plans for hydropower dams, its flouting of proposed quotas on bluefin tuna fishing, its policies allowing deforestation around the Black Sea, and its encouragement of coastal development, Turkey’s government has paid scant attention to environmental considerations.

‘If they’re not given proper protection soon, they could be gone within 20 or 25 years,’ says one scientist.

The building boom along Turkey’s coast is just one of many factors that have taken a toll on cetaceans, scientists say. Arda Tonay, a biologist at Istanbul University, said that pollution, coupled with shortages of food, can compromise the cetaceans’ immune systems and lead to outbreaks of so-called epizootic diseases. In addition, industrial and urban pollution can destroy fish nursery grounds, explains Maria del Mar Otero of the International Union for Conservation of Nature.

Local authorities, keen on profit, generally do little to slow development and protect coastlines. “It’s a national park area, but they want to let big resorts in,” complains one resident in the quiet village of Cirali, a nesting territory for loggerhead sea turtles south of the tourist hub of Antalya. “They want every place to look like Antalya.”

Turkey’s economic boom is on display in Istanbul, where skyscrapers are rising at a furious pace. Roughly 52,000 ships transit through the Bosphorus each year — up from 45,000 in 2000 and 4,500 in 1936, when the Montreux Treaty, which opened the straits to international shipping, was signed. An additional 2,500 local vessels ply the waters daily. The resulting noise pollution interferes with the ability of ceteaceans to rest and to communicate using a sophisticated system of whistles, clicks, and squeaks. 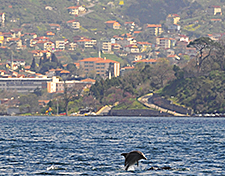 A dolphin leaps out of the waters of the Bosphorus Strait near Istanbul. OZAN KOSE/AFP/GETTY IMAGES

“Imagine if every time you tried to sleep or eat there was a loud noise or someone poking at you,” says Akkaya. “They’re like us: they need to socialize and if they can’t eat or sleep properly, they can’t socialize the way they should.”

Rapidly growing human populations have also intensified fishing of prey species eaten by dolphins and porpoises. “They’re the top predators in the ecosystem, and they need enough food,” says Tonay. “Watch all those industrial purse seiners that go through the Istanbul Strait in September during the pelagic fish migration. This is not a sustainable fishery.”

In addition, cetaceans often are trapped and killed in nets set for turbot and other fish. Although Turkey banned turbot fishing in May and June in recent years, illegal fishing continues. Even in marine protected areas, or MPAs, lax enforcement can mean shockingly low fish populations. A recent paper published in PLoS ONE, which compared MPAs across the Mediterranean, found exceptionally low numbers of fish in places like Gokova Bay in southwestern Turkey.

The fishermen themselves often view dolphins and porpoises as competition for scarce resources, and even resort to shooting them. “When they’re done, there’s nothing left for us,” grimaced one fisherman as he reeled in a line from a spot in the Marmara Sea where dolphins had just been feeding.

Tonay and other scientists say it is vital to create MPAs in waters frequented by cetaceans, including the Bosphorus, the Sea of Marmara, and the Dardanelles, known collectively as the Turkish Straits. Currently, less than 3 percent of Turkey’s territorial waters are MPAs, and the laws protecting these areas are rarely well-enforced. In 2006, ACCOBAMS proposed that the Turkish straits be designated an MPA. Turkey, however, is not a contracting party to ACCOBAMS.

Scientists say it is vital to create marine protected areas in waters frequented by cetaceans.

Akkaya is now identifying critical cetacean habitat within the straits and adjoining seas — places where dolphins and porpoises feed, rest, breed, or socialize — and is working to persuade Turkey to protect these areas. But to date, the government has shown little willingness to do so, as it does not want to disrupt the ship traffic that is vital to Istanbul’s economy.

One bright spot is a project that SAD-AFAG, a Turkish NGO, and the conservation group WWF have undertaken in the outer Gulf of Izmir on the Aegean Sea and the Cilician Basin on the Mediterranean. The goal was to protect seals by bringing fisheries under control. To safeguard seal habitat, no-fishing areas were established. Fishermen and NGOs convinced the government to ban large-scale fishing in Foca on the western Turkish coast; this was followed by a ban on beach seine-fishing along the Mediterranean and Aegean in 2001. The result was a recovery in fish numbers, with more for both seals and humans. Seal sightings are on the rise.

To stabilize incomes, the NGOs encouraged local fishermen to set up cooperatives: Each fishermen would pay a percentage of earnings into a common fund, which they could then draw upon for credit in lean times. “It took us twenty years,” says Ozan Veryeri of SAD-AFAG, “but we finally managed to convince local fishermen that they did well when the seals did well.”

There are, of course, major differences between the remote regions where such efforts have worked and a sprawling megalopolis like Istanbul. To save Istanbul’s cetaceans will require concerted efforts on a broad front. But if these efforts fail, something irretrievable will have been lost: The knowledge that when you gaze upon the waters of the Bosphorus, you might see a tail rise as a bottlenose dives, or watch a harbor porpoise skimming across the waves.