During the summer of 2007, lightning strikes sparked five tundra fires on Alaska’s North Slope. Two of the fires — rare events north of the Arctic Circle — began in neighboring drainages, only a couple of days apart. That, in itself, might have gained the attention of tundra researchers. But the 2007 fire season would ultimately burn a record swath across the North Slope, while reshaping the way scientists think about the Arctic’s response to global warming.

Researchers have known for years that the Arctic landscape is being transformed by rising temperatures. Now, scientists are amassing growing evidence that major events precipitated by warming — such as fires and the collapse of slopes caused by melting permafrost — are leading to the loss of tundra in the Arctic. The cold, dry, and treeless ecosystem — characterized by an extremely short growing season; underlying layers of frozen soil, or permafrost; and grasses, sedges, mosses, lichens, and berry plants — will eventually be replaced by shrub lands and even boreal forest, scientists forecast.

Much of the Arctic has experienced temperature increases of 3 to 5 degrees F in the past half-century and could see temperatures soar 10 degrees F above pre-industrial levels by 2100. University of Vermont professor Breck Bowden, a watershed specialist participating in a long-term study of the Alaskan tundra, said that such rapidly rising temperatures will mean that the “tundra as we imagine it today will largely be gone throughout the Arctic. It may take longer than 50 or even 100 years, but the inevitable direction is toward boreal forest or something like it.” 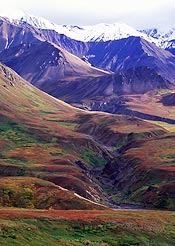 iStock
With temperatures increasing across the Arctic, the Alaskan tundra as we know it could be gone before the end of the century, some scientists predict.

Dominique Bachelet, a climate change scientist at Oregon State University, forecasts that by 2100 tundra “will largely disappear from the Alaskan landscape, along with the related plants, animals, and even human ecosystems that are based upon it.” She made that prediction in 2004, and now says “the basic premise still holds, but the mechanism of change may be different than we thought.” Instead of long-term, incrementally complex changes caused by gradually warming temperatures, “extreme events will be the important triggers for change.” Hot-burning fires or slumping hillsides tied to melting permafrost could “clean the slate and allow new species to establish themselves,” Bachelet said.

The transformation of the tundra — the word comes from the Finnish, tunturia, meaning “treeless plain” — will have a profound impact on the creatures that live and breed there, including grizzly bears, wolves, foxes, and many species of waterfowl and migratory songbirds. Especially hard-hit could be caribou, which depend heavily on lichen as a food source.

Increased burning and thawing of the tundra also is expected to accelerate global warming. Scientists point out that huge amounts of carbon — and substantial amounts of methane, an even more potent greenhouse gas — are tied up in the permafrost that underlies most Arctic tundra. Michelle Mack, an ecosystems ecologist at the University of Florida in Gainesville, notes that “twice as much carbon exists in the world’s permafrost as in the atmosphere. So as they melt, these soils will add immensely to the carbon dioxide in the air.”

Large, hot-burning fires have been transforming the Alaskan tundra for decades.

Many scientists are now researching the role that fire plays in altering the landscape of the far north. The North Slope’s 2007 mid-July fires were a seminal event, especially the blaze that began on July 16 in the Anaktuvuk River valley and turned into a full-blown conflagration. Abnormally high late-summer temperatures, unusually low summer rainfall, a late-season high-pressure system over the nearby Beaufort Sea, the autumnal senescence (aging and drying) of tundra plants, and the record retreat of sea ice in the Arctic Ocean — which contributed to the warmth — created prime conditions for a large and intense fire.

By the time early winter snows put out the fire, it had burned an area about 40 miles long by 10 miles wide, or more than 250,000 acres, making it the biggest fire in Alaska that year and historically the largest by far ever to burn across the North Slope. It was also more intense than normal tundra fires, severely charring much of the landscape through which it swept.
Bowden said the fire “was both a really rare and huge event, and because it burned with several levels of intensity, the Anaktuvuk River has given us a natural laboratory” to study Arctic tundra ecosystems and how they’re responding — and contributing — to changes in the Earth’s climate.

While the Anaktuvuk River burn has gained widespread attention because it is a North Slope rarity, there is plenty of evidence that, elsewhere in Alaska, large, hot-burning fires have been transforming the tundra for decades. 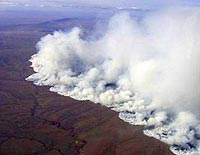 Bureau of Land Management
By the time early winter snows put out the 2007 fire on Alaska’s North Slope, it had burned an area about 40 miles long by 10 miles wide, or more than 250,000 acres.

Randi Jandt, a fire ecologist with the Bureau of Land Management and one of many researchers studying the aftermath of the Anaktuvuk River fire, has seen the proof a few hundred miles to the southwest, on the Seward Peninsula. There, a team of researchers has been systematically investigating a tundra landscape that caught fire in 1977. Because a portion of the burn area had been studied prior to the blaze, they’ve been able to compare before-and-after plant assemblages. Thirty-three years after the fire, a place that formerly contained substantial moss (20 percent) and fruticose lichens (7 percent) remains almost free of those species. Meanwhile shrubby willows have increased from 5 to 40 percent.

“Obviously the landscape has already changed a lot and it’s continuing to change,” Jandt says. “Shrubs are increasing at the expense of lichens and mosses, and as willows take over, they’re going to transform the landscape even more. The key is that the soil is warming. It really doesn’t matter whether that happens gradually or dramatically, through fire.” As the warming of the soil increases, it favors the shrubs because they can more easily take root and then grow substantially faster in milder conditions, eventually “shading out” and outcompeting mosses and lichens.

The lichen decline has serious implications for Alaska’s Western Arctic Caribou Herd, whose core wintering ground includes much of the Seward Peninsula. Lichens comprise up to three-fourths of the caribou’s winter diet, notes Kyle Joly, a National Park Service researcher who has studied the herd since 2004. A permanent shift to shrub-rich, lichen-poor tundra in its winter range “could be really bad news” for the caribou, Joly says.

After peaking at nearly 500,000 caribou in 2003, the Western Arctic Herd — Alaska’s largest — dropped significantly, to an estimated 377,000 animals in 2007. This has alarmed some native Alaska residents, whose subsistence lifestyle depends heavily on caribou.

A permanent shift to shrub-rich, lichen-poor tundra ‘could be really bad news’ for caribou.

In the course of studying caribou, Joly has also learned a great deal about the role of fire in “low,” or sub-Arctic, tundra, where for several decades at least it has been a much more significant factor than on the North Slope’s “high Arctic” landscape. About 9 percent of Alaska’s lower latitude tundra burned between 1950 and 2007, whereas only 7 percent of the North Slope caught fire during that period. That could change as the region warms and fires become more frequent farther north.

Joly’s and Jandt’s overlapping interests and study areas have prompted them to jointly analyze several interrelated factors — fires, caribou foraging, global warming, and shrub expansion — that appear to be acting “unidirectionally” to reduce lichen cover in northwest Alaska, a change likely to have substantial ripple effects.

Jandt’s fascination with tundra wildfires has now led her northeast, to the Anaktuvuk River burn, where in 2008 she and several research partners established transects to study burn severity, plant community shifts, and the effects of fire on permafrost and active soil layers. Among the team’s observations so far: virtually no lichen cover remains in the burn area; willows have begun re-sprouting, and by 2009 some were already more than a foot tall; and tundra slumping and collapse has occurred. 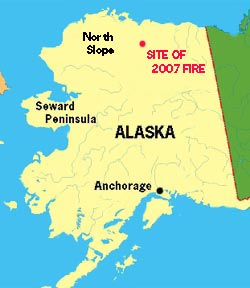 Yale Environment 360
Researchers studying the aftermath of the 2007 fire have drawn on the evidence from a 1977 blaze on the Seward Peninsula that has had lasting effects on the landscape.

Many other scientists have also begun studies in the Anaktuvuk burn, which has become part of the Arctic Long Term Ecological Research (LTER) program. Based at the Toolik Field Station, in the Brooks Range’s northern foothills, the LTER study is funded by the National Science Foundation. Among the many researchers working out of Toolik is Mack, who characterized the tundra as “a very resilient plant community.” But for all its resilience, Mack wonders if North Slope tundra is headed for substantial and perhaps irrevocable change, particularly if “fire starts the ecosystem on a new trajectory,” as has happened on the Seward Peninsula.

Another researcher, Adrian Rocha of The Ecosystems Center in Woods Hole, Mass., found that a year after the fire, severely burned tundra released nearly twice as much carbon into the air as unburned tundra absorbed. Two years later, the burned tundra continues to release carbon.

Other scientists are looking at a different, but related, extreme Arctic event: the development of “thermokarst failures” within the burn area and in other parts of the North Slope. Nearly 20 research groups are involved in the thermokarst project, a collaborative effort supported by the National Science Foundation’s Arctic System Science Program.

The transformation will have ripple effects for plants, insects, wildlife, and humans.

A thermokarst is uneven terrain produced by thawing permafrost, and recent studies have revealed many more thermokarst features than anyone expected. On flat ground, that may mean bumps and hollows. But on sloping ground, it can create huge slumps in which tons of soil move downhill. Such thermokarst failures can lead to high carbon dioxide and methane emissions from newly exposed and thawing soils, thus contributing to atmospheric warming. The thermokarsts provide niches for new plants and shrubs, which add to the “greening” of the tundra and warming of the soil, which in turn favors even more shrub growth. And in moving huge amounts of sediments and nutrients, thermokarsts can have “enormous impacts” on tundra streams and lakes, Bowden says.

Anything that warms tundra and thaws permafrost — from fires to milder annual temperatures and increased rainfall, particularly in winter — can contribute to thermokarst failures. Because climate change models predict a warmer and wetter Arctic with increased summer thunderstorms and lightning, thermokarsts are likely to occur on an ever-larger scale.

Already, Bowden says, thermokarst failures similar to those in Alaska — and in some cases much larger — have been reported in Siberia and Canada: “It’s a pan-Arctic phenomenon, with the exception of a few areas that haven’t warmed,” says Bowden.

Even in areas unaffected by fires and thermokarst failures, there’s evidence that tundra itself is warming. Canadian researcher Greg Henry of the University of British Columbia has reported that tundra in his Nunavut study area has on average warmed 1 degree Celsius (1.8 F) per decade since 1970. He attributes that largely to a greener, “weedier” tundra.

As Bowden, Bachelet, and other researchers have pointed out, the transformation of the tundra will have huge ripple effects, not only upon plant communities, but also upon the landscape, insect populations, wildlife, and human communities. Unless there’s some dramatic and unexpected shift, the world’s northern regions will be changed drastically, likely for hundreds or thousands of years.