Sakiasiq Qanaq has seen a lot of changes on the north coast of Baffin Island in recent years as the retreat of summer sea ice has continued unabated. But the Inuit hunter has never seen anything quite like this year, when sea ice loss in the Arctic hit a record low.

First, the community’s spring narwhal hunt, which usually yields roughly 60 of the tusked whales, produced only three. The sea ice was so thin that the Inuit couldn’t safely stand on it and shoot the narwhal as they migrated into Arctic Bay from Greenland through channels in the ice. Then an unprecedented number of killer whales, or orcas — rarely seen in heavy ice — showed up in the largely ice-free water, with Inuit hunters in nearby Pond Inlet observing three pods of orcas that reportedly killed some of the narwhals and scared off the others.

But the final, and most startling, change was the one Qanaq found in his fishing nets. In addition to the Arctic char that he routinely catches, he and other fishermen were pulling in Pacific salmon — a fish not normally seen in the Arctic east of Alaska, and one that is known to dominate and sometimes drive out char in circumstances when the two overlap. “I don’t know what to think,” he told me. “I really don’t. This is all very strange.”

Some Inuit feel they are losing control of a homeland whose ice-covered expanses had long acted as a barrier to the outside world.

The rapid retreat of the sea ice that has defined the Arctic ecosystem for thousands of years is threatening the existence and movements of creatures that have long been at the heart of Inuit subsistence culture — whales, seals, polar bears, and fish. And the transformation to a largely ice-free Arctic Ocean in summer — Arctic sea ice extent last month hit a stunning new low of 1.3 million square miles, a 50 percent decline from the 1979 to 2000 average — also has meant a new and at times threatening influx of human outsiders to the region.

Some Inuit feel they are losing control of a homeland whose ice-covered expanses had acted as a barrier to the outside world. A growing number of interests — mining and oil companies, scientists and conservationists, military vessels from Canada and other Arctic nations — are appearing in the Inuit’s traditional homeland, leaving many wary of southerners who increasingly seek to influence the future course of the Arctic.

But while some Inuit are unsettled by environmental changes that neither they, nor scientists, fully comprehend, other Inuit in Canada and Greenland are embracing development in a region with high rates of unemployment and a rapidly growing population. (Officials predict that Canada’s Inuit population will grow from 53,000 today to 77,000 in 20 years.)

Leona Aglukkaq, an Inuit who is Canada’s Health Minister and who was recently appointed to be the future chair of the Arctic Council — a forum representing all states bordering the Arctic Ocean and organizations representing indigenous people — would like to see scientists and conservationists butt out when it comes to weighing in on how to manage a future for the Inuit. This includes outsiders trying to block oil and gas development or mining, as well as those seeking to restrict the harvest of increasingly threatened, sea ice-dependent species. 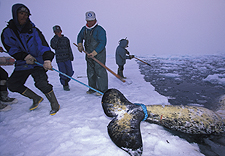 Photo by Paul Nicklen /National Geographic/Getty Images
Inuit hunters on Baffin Island pull a dead narwhal out of a channel in the spring sea ice several years ago.

“It’s about fighting environmentalists that try and put a stop to our way of life and hunting to provide for our families,” Aglukkaq said last spring.

She is especially upset about recent proposals from scientists and conservation groups for a moratorium on commercial fishing in the Arctic, limits on polar bear hunting in some parts of the Arctic, and a federal plan that would have banned the sale of narwhal parts — a plan that was shelved after the Inuit threatened the Canadian government with legal action last December. Polar bear hunts have been a lucrative source of income for many Inuit, who charge big game hunters as much as $50,000 to kill a bear.

Adamant as Aglukkak and her colleagues in the Conservative government of Canada are, some decisions on wildlife conservation could be out of their hands if the Convention on the International Trade in Endangered Species (CITES) becomes involved. CITES representatives meet next year and are expected to upgrade the status of polar bear to a level that will result in a worldwide ban on trading polar bear parts, spelling the end of polar bear sport hunting and the trade in hides in Canada.

The recent era of mistrust between the Inuit and outsiders has its roots in the anti-sealing movement of the 1970s. Although it was intended to shut down the clubbing of baby seals off the coasts of Newfoundland and Labrador, the ensuing European ban on sealskin products profoundly affected the Inuit. Tensions heightened in the eastern Arctic in 2007 when National Geographic magazine published an article suggesting that the Inuit’s narwhal hunts were wasteful. The author described how Inuit hunters shot many more of the whales than were landed. In an angry response, two communities — Arctic Bay and Iglulik — passed bylaws that effectively shut down the tourist industry. (This year, narwhal hunters made up for the poor spring hunt by killing more than 100 of the whales in open water in summer.)

‘We need jobs, but I don’t think these developments are going to be good for hunting,’ says one Inuit whale hunter.

Then, in 2010, the Inuit of the eastern Arctic sued the Canadian government to stop seismic testing in Lancaster Sound. The project was intended to map underwater geological features so that both the government and Inuit organizations could make informed decisions about future resource development. The Inuit, however, feared that it would negatively affect whale migrations and heighten prospects for oil and gas drilling in the region.

Now, the European-based steel giant ArcelorMittal is moving forward with plans to extract 21 million tons of iron ore a year over the next two decades on Baffin Island. The $4 billion project at Mary River, which includes construction of the first seaport in the Canadian Arctic and a 70-mile-long railroad across the roadless tundra of Baffin Island, will almost certainly affect whale, caribou, and other animal migrations.

For Teman Avingaq, an Inuit whale hunter who is struggling to feed his young family, the prospects of ice retreating and more ships sailing through the Arctic are daunting. So, he says, is the idea of a railroad crossing a caribou migration route on the tundra to move iron ore from one end of Baffin Island to the other. “We already have to go a long way before we can find any caribou now,” he says. “Same with narwhal this year. We need jobs, but I don’t think these developments are going to be good for hunting.” 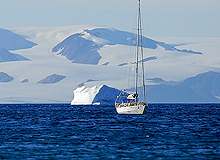 Photo by Ed Struzik
The vessel, Arctic Tern, sits off Devon Island, where the waters contained an unusually low amount of sea ice this summer.

In August, I sailed through this region on the 47-foot, steel-hulled sloop, Arctic Tern, participating in an expedition called the “Last Ice Area Voyage” that had been organized by the World Wildlife Fund (WWF) and funded by Canon Europe. The route of the voyage — from Greenland to the High Arctic Canadian islands of Ellesmere, Devon, and Baffin — was designed to study the last refuges of the Arctic’s rapidly melting summer sea ice and to gauge the impact of these changes on the local Inuit population.

Sailing into the Northwest Passage, the legendary sea route whose ice-choked waters thwarted mariners for more than 500 years, I was astonished by the lack of ice. This was the seventh time I had found myself boating through this part of the polar world. But it was the first time the boat carrying me was neither grinding through large pans of ice nor dodging icebergs. The only appreciable ice in sight was the enormous ice cap that covers most of Devon Island, vividly illuminated by the setting sun.

Those who think they can map out an Arctic future without meaningful consultation with the Inuit are mistaken.

When we stopped in the Inuit community of Arctic Bay on Baffin Island, Jack Willie, manager of the local hunters and trappers organization, told me, “It’s been a crazy year. It’s been raining all summer.”

While we received a warm welcome in some communities, we encountered skepticism in others. At Pond Inlet, a small settlement on the northern tip of Baffin Island, callers to a local radio station said they were convinced that WWF was bent on shutting down the narwhal hunt, even though the conservation organization says it is funding research that could result in the Inuit being able to harvest more whales in the future.

Clive Tesar, head of communications for WWF’s Global Arctic Program, said he believes that there is common ground for conservation groups and scientists to collaborate with the Inuit in mapping out a future for the Arctic.

“Peoples of the Arctic are famously adaptable — they’ve had to be to survive some of the world’s most extreme conditions,” he said. “However, whole cultures have been built on the presence of the ice, and the animals associated with the ice. People will survive, but some things very important to them may not.”

Frank Tester, a University of British Columbia social scientist who has lived in Arctic Bay and worked extensively with the Inuit, cautions that those who think that they can map out a future for the Arctic without meaningful consultations with the Inuit are mistaken.

“I don’t know of any modern-day culture that has experienced changes on a scale such as the ones they’ve experienced in such a short period of time,” Tester said. “In less than a decade in the 1950s and 1960s, they went from being a hunting and gathering culture to a modern one. They’ve undergone forced relocation and had their children sent to residential schools. Now with climate change and the prospects of rapid industrial development, they’re going through another catastrophic change. In the past, southerners have been able to tell them what to do, but no more.”

At the end of our trip, sailing to Pond Inlet, we passed two cargo ships steaming west to supply the mine exploration site at Mary River. Anchored behind them were a Canadian warship and a U.S. Coast Guard vessel, seemingly reminding the Inuit to get used to the idea that their homeland is no longer strategically insignificant or isolated.