Is global climate leadership about to pass from Europe to the United States? It seems so. And Barack Obama’s plans to rejoin international climate negotiations, green American energy policy, and build an electricity super-grid to bring renewable energy out of the West could be a planet-saver.

Europe’s leadership on fighting climate change seemed unassailable until just a few months ago. It had grabbed that position more than a decade ago, when Germany’s then environment minister, a former East German chemist named Angela Merkel, negotiated the groundwork for the Kyoto Protocol in Berlin in 1995. Two years later, Europe basically pushed Bill Clinton to send Al Gore to Kyoto to sign up to the first emissions targets — which were never ratified by the U.S. Senate and subsequently repudiated by George W Bush.

Early last month, Merkel — now German Chancellor — signaled Europe’s retreat. She successfully lobbied on behalf of her coal-burning and car-making industries to water down European Union plans for carbon emissions trading in a new EU energy package. It is now unclear whether EU promises to cut emissions by 20 percent by 2020 — and 30 percent if other developed nations will go along — can be met. 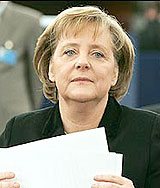 This is not to say that Europe’s climate policies are bust. But its leadership role certainly is. At international climate talks in Poznan, Poland last month, environmentalists took to calling the once-revered German leader “Darth Merkel.”

The inauguration of Barack Obama now looks like the world’s best chance to break free of the climate trap. The incoming U.S. president says meeting the challenge of climate change and ensuring America a secure energy supply are top priorities that can both be achieved by weaning the country off its dependence on imports of foreign fossil fuels.

Among the climate cognoscenti, the sense that a really important shift may be about to happen was accentuated when Obama announced in December that he had chosen Steven Chu as his energy secretary.

The Nobel prize-winning head of the Lawrence Berkeley National Laboratory has helped pioneer research on energy efficiency, solar energy, and cellulosic “second generation” biofuels. Last year he announced a $500 million deal with BP to fund a new Energy Biosciences Institute at Berkeley. “We are seeking industry partnerships,” he said then. “We seek solutions. We don’t seek, dare I say, science papers anymore.”

The inauguration of Barack Obama now looks like the world’s best chance to break free of the climate trap.

Chu is also an advocate of a national high-voltage electricity super-grid to distribute renewable energy across the United States. In 2005, he went to Washington to pitch the idea — none too successfully, it seems — to Bush’s energy secretary Samuel Bodman. And now it fits right in with Obama’s campaign promise to establish “a new digital grid… to make effective use of renewable energy.”

It also fits in as part of the new, green, job-creating, economy-reviving, American infrastructure that Obama promises — his 21st century version of the New Deal’s Grand Coulee and Hoover dams.

In September I visited California, where they are already test-driving some of Obama’s plans under the unlikely gaze of Governor Arnold Schwarzenegger. The state legislature has passed a key law to enact emissions reductions programs through regulation and carbon trading. The laws are intended as a model for federal action.

Even more striking are the green energy entrepreneurs tooling up in California. “If Barack Obama wins,” David Mills, the bicycling-mad boss of solar energy pioneers Ausra in Palo Alto, told me, “then it’s going to be boom time here.” He was cheering even louder with the news of Chu’s appointment.

Mills and Ausra are in the vanguard of what many believe will become the critical renewable technology for America — solar thermal energy. Unlike photovoltaics, which convert solar heat directly into electricity, solar thermal concentrates solar energy using mirrors to heat water, which is then used to drive conventional steam turbines. One of the advantages of solar thermal is that it allows the energy to be stored for when it is needed, in the form of hot water. 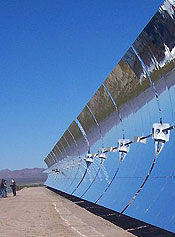 Companies are looking to put solar installations across the American West. This solar thermal plant near Las Vegas produces 64 megawatts of power. SOLARGENIX

Mills, a Canadian, developed his system in Australia. But a couple of years ago, frustrated by government indifference there, he shipped out to California. “It has a state plan for renewables; it has the technologists to deliver; and it has the venture capital,” he told me. Backers in Silicon Valley have pumped hundreds of millions of dollars already into start-up green tech companies like Ausra. In the fall, Mills opened a robot-run factory outside Las Vegas ready to cover the deserts of the American West with glass mirrors that catch the sun’s energy.

“This is not mad scientists any more,” Mills said. “In the next decades, clean energy is going to be ten times bigger than the internet and IT combined. The energy business is the largest business in the world, and with climate change, it all has to be replaced. We are just waiting to deliver to the boom.”

Industry analysts say up to $50 billion in capital is waiting to be invested in solar projects in the Nevada desert. On his arrival at the Oval Office, Obama will find in his in-box applications for permits to put solar panels and reflectors across 400,000 hectares of the West — enough for 40,000 megawatts of electricity generating capacity.

And utilities are willing to buy. All they need is the green light from Washington: a few tax breaks, permission to erect mirrors on federal desert land, a cap-and-trade system that puts a price on carbon emissions from burning fossil fuels, and a transmission system to get the new green power to market. Mills has published peer-reviewed papers showing how the United States could get 90 per cent of its energy from covering just 10 per cent of the Nevada desert with mirrors.

Could it happen? Renewables like solar and wind have two problems. First, they are intermittent. Some days there is no wind; every night there is no sun. Second, unlike coal or oil, the fuels are not transportable. And most of the U.S.’s renewable potential is west of the Mississippi, whereas most of the demand is east of the Mississippi. The United States currently has no national grid capable of moving the power east.

Industry advocates say that a new high-voltage direct-current grid, using superconducting materials to minimize transmission losses, could transform the potential of U.S. renewables. And by connecting wind and solar energy (not to mention some nuclear and fossil fuel, too), it would minimize the risk of an outage of any one source of power due to the weather crashing the system.

If green tech is good enough for Americans, then everyone will want not just to make it but to use it as well.

This is not just about the United States. The technology that drives America usually ends up driving the world. If Obama goes for a smart super-grid, you can almost guarantee that Merkel and her fellow Europeans will suddenly get more enthusiastic about a super-grid scheme quietly being promoted there to hook up to solar energy from the Sahara desert. A grander version would also tap geothermal energy from Iceland, hydropower from Scandinavia, and wind power from the North Sea.

The U.S. market is so big it could have huge implications for R&D and energy manufacturing around the world. And if green tech is good enough for Americans, then everyone will want not just to make it but to use it as well.

Climate scientists believe we have to cut global greenhouse gas emissions by more than 50 percent by 2050, with cuts of 80-90 percent in industrialized countries. If so, then the decarbonization of our economies has to be completed within the lifetime of power plants being designed and financed now.

In Germany, once the darling of the greens, they are talking right now about building a new generation of coal-fired power stations. In America, the talk is different. The talk is about delivering energy security AND climate security. But talk is just talk. Let’s hope Obama delivers on what he says.