The scenario might have been different: As weather reports confirmed that an incoming nor’easter would drive Hurricane Sandy inland, New York City would have begun watching the rising waters and preparing to respond. When, as predicted, the storm surge showed signs that it would begin to inundate the shorelines of lower Manhattan, Brooklyn, and Queens, the emergency system would have kicked in: Across the Verrazano Narrows entry to New York Harbor, across the upper East River, across the entrance to Jamaica Bay, the floodgates would have begun closing.

Like massive garage doors between pilings 10-stories high, the gates would have fallen into place. In the Verrazano Narrows at the mouth of the harbor, huge gate-like storm barriers, through which ships normally pass, would have pivoted slowly together. Within an hour, the surging seas would have been shut out. Rains and winds would cause their damage, but New York City would have been protected from the storm surge that ended up inundating its vulnerable infrastructure.

Hurricane Sandy has sparked a realization that the defenses of old are no longer adequate.

Then, a week ago, Hurricane Sandy struck, killing 106 people on the U.S. east coast (40 in New York City), causing an estimated $50 billion in damage (roughly $17 billion in New York City alone), and flooding large parts of the region’s infrastructure, including tunnels, subways, and power stations.

Under Mayor Michael Bloomberg, New York City had been working on gradually protecting its infrastructure from the long-term threats of climate change, including a predicted sea level rise of more than three feet this century. But what Hurricane Sandy showed is that New York City may not have the luxury of time. The storm easily overwhelmed many of the relatively minor adaptations that New York had already put in place.

For Malcolm Bowman — an oceanographer at the State University of New York, Stony Brook, and a member of the mayor’s Climate Change Adaptation Task Force — and for other scientists, the destruction wrought by Sandy demonstrates that the time has come for rethinking the city’s strategy. While gradually building resilience into the system is an admirable goal, says Bowman, it can only go so far. “It’s like a boxing match in which you get punched in the nose, return to your corner, patch it up, and get back into the ring,” said Bowman. “But now the city’s been dealt a knockout punch.” 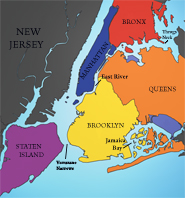 Scientists, engineers, and public officials say that Hurricane Sandy has sparked a realization that the defenses of old are no longer adequate. Whether the “superstorm” was largely the result of the vagaries of weather, or is indicative of a new normal brought on by climate change, officials are warning that New York and other cities can expect more of the same and had better harden their defenses.

“After what has been happening in the last few years, I don’t think anyone can sit back anymore and say, ‘Well, I’m shocked at that weather pattern,’” New York Gov. Andrew Cuomo said last Tuesday. The following day, Cuomo spoke of building sea walls or other protective structures, adding, “Climate change is a reality. Given the frequency of these extreme weather situations we have had, for us to sit here today and say this is once in a generation and is not going to happen again, I think would be shortsighted.”

And Bloomberg, a global leader in helping cities begin to adapt to climate change, said only a few days after the storm, “Our climate is changing. And while the increase in extreme weather we have experienced in New York City and around the world may or may not be the result of it, the risk that it may be — given the devastation it is wreaking — should be enough to compel all elected leaders to take immediate action.”

The question now is, what kind of action? And what lessons should New York City should learn from Hurricane Sandy? The mayor and the governor face a wide array of options, ranging from efforts to recreate marshes and oyster beds along the city’s 510 miles of coastline, to locally protecting infrastructure such as subway stations, to building billion-dollar networks of storm surge barriers.

‘For us to say that this is not going to happen again would be shortsighted,’ said Gov. Andrew Cuomo.

While no one could have predicted the unique meteorological phenomenon that was Sandy, the terrible scenarios that played out as the storm battered the New York City region should have sounded eerily familiar to Mayor Bloomberg, utility companies, and city, state, and federal agencies. The inundated coastline and desperate evacuees, the flooded roads, tunnels, and subways — they’d seen them all in computer models and PowerPoint presentations about the future impacts of climate change, and they had discussed them in interagency meetings with oceanographers, geologists, and climate scientists.

The problem was that what they were seeing was not supposed to be happening now — not for perhaps another 20 years when, they’d been told, rising sea levels due to climate change would turn the storm surges of ordinary nor’easters or low-category hurricanes into devastating tidal torrents.

It wasn’t as if they’d been derelict in starting to plan. New York City and its agencies had consulted an elite group of government and university scientists, economists, and risk management specialists to study how climate change would affect the city. In 2008, the New York Panel on Climate Change concluded that given steadily rising seas, today’s 1-in-100-year flood could occur once every 35 to 55 years by 2050, and once every 15 to 30 years by 2080. The panel also concluded that atmospheric changes would likely increase the intensity of storms and bring more rain to the region.

Recent storms have shown it may be time to consider solutions more in scale with the risks.

With the science in hand, the city formed a Climate Change Adaptation Task Force to determine how best to adapt infrastructure to withstand the effects of future climate challenges. The task force recommended a gradual approach to protecting the city’s assets: improve shoreline land management; consider building new wetlands out into the harbor to better absorb the power of storm surges; and build higher seawalls, jetties, and dykes to protect subway entrances, highway tunnels, and power stations. To keep the costs manageable, these changes would be made gradually. The cost would be in the tens of millions of dollars a year, but given time, New York would become the very model of a “climate-resilient” city that protected its people and its critical infrastructure.

But what recent storms have shown, including Hurricane Irene last year, is that it may be time to consider solutions more in scale with the risks. A decade ago, Bowman’s Storm Surge Research Group at the state university at Stony Brook conceived a system of large barriers and sea walls that would protect the city’s most vulnerable shorelines from storm surges. One would stand by the Whitestone Bridge on the upper East River, another by the eastern entrance to Jamaica Bay, and a third — and most ambitious — would be capable of sealing off the lower harbor and stretch from Brooklyn to Staten Island parallel to the Verrazano Narrows bridge.

One proposal calls for a storm surge barrier across the Verrazano Narrows between Brooklyn and Staten Island. ARCADIS

Had such a system been in place, says Bowman, it would have stopped Sandy’s storm surge from reaching the city. And though it would have cost some $13 billion, it would have been cheaper than the current estimated damages from Sandy.

These are not untested technologies. Storm surge barriers have protected the Netherlands for centuries, with the most recent built to withstand a 1-in-10,000 year flooding event. Rotterdam began to work on its storm barriers after more than 1,800 people died in a 1953 flood. (The system of dikes, dams, and storm surge barriers is now a major tourist attraction.) St. Petersburg, Russia, last year completed a 15-mile sea surge barrier across the Gulf of Finland. Begun in 1978, it is designed to protect the city from tidal surges up to 16 feet.

Bowman and colleague Douglas Hill have no illusions that the construction of a system of barriers around New York City will be a quick, easy, or even complete fix. But, says Bowman, it’s time to begin considering this regional approach to flood protection and engage the Army Corps of Engineers, the environmental community, and local and port authorities. These projects, he points out, take decades to build — not because of difficulties with construction, but due to the many studies necessary to reckon with a complex tidal ecosystem.

Piet Dircke of ARCADIS, a Dutch corporation that recently built some of New Orleans’ post-Katrina dikes, also provided Bowman with a rough concept of a storm surge barrier across the Verrazano Narrows, one that would allow for large and small ship traffic and for natural tidal flow when no storms are present. New York City, says Dircke, faces the same problems that climate change poses for delta cities around the world, whether it’s Bangkok, Jakarta, or London. In those cities, as in New York, populations and economic assets are growing (New York City’s economic value grew some 40 percent between 2001 and 2012), while sea level and the threat of catastrophic flooding also rise.