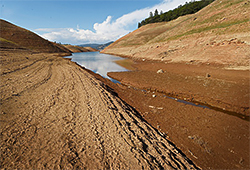 All this being said, it is also clear that this drought is exceptional and should be seen as an historical turning point. Indeed, California is moving into new — and worrisome — territory for three reasons: rising heat, which causes increased evaporation; the continuing depletion of groundwater supplies; and growing water shortages on the Colorado River, the main external source of water for Southern California.

A decade ago, I first wrote about California and the “perfect drought.” Now, unless bold steps are taken to deal with a growing water crisis, California may be facing a future of perfect droughts.

First, there is the heat. Although the current precipitation deficit cannot be attributed to global climate change, the record-breaking high temperatures of 2014 can be. These elevated temperatures produce increased evaporation from reservoirs and exacerbate irrigation demands. The commonly used Palmer Drought Severity Index combines both temperature and precipitation and in doing so shows that 2014 is indeed off the charts. This combination of low precipitation and high evaporative losses fuels the crisis now being faced.

The current drought in California might well be considered the harbinger of droughts to come.

Climate models do not provide a consensus on the changes in precipitation that might occur in California over the 21st century. Moving forward, there may well be no significant increase or decrease in the average annual precipitation. However, the models do agree that temperatures will continue to rise. Water demands to meet evaporative losses will therefore increase significantly. There is also some evidence that the length and depth of droughts will increase in the later 21st century. As for high temperatures and persistence of extreme conditions, the current drought might well be considered the harbinger of droughts to come.

Second, increased reliance on groundwater has been an important mechanism by which California coped with past droughts. However, the groundwater resources of the state are displaying clear signs of unsustainability. Over the past 150 years, agricultural and domestic extraction has caused water table depths to fall by 100 or so feet in some instances, and the deep aquifer water level to decline by even greater depths in parts of the San Joaquin Valley, one of the most productive agricultural areas in the world. In some places the land surface itself has subsided by more than 20 feet. The current drought has led to increased demands on groundwater in regions such as the San Joaquin Valley, where more than 2,400 well permits were issued in 2013 as the drought hit home.

Analysis of such trends and new groundwater storage data collected by NASA’s GRACE satellite has led NASA hydrologist Jay Famiglietti to suggest that the collapse of the San Joaquin groundwater reserves may be only decades away. In 2014, more than 1,400 domestic water supply problems largely related to groundwater were reported in California, with more than half in the San Joaquin Valley. Going forward this century, the San Joaquin Valley is projected to experience high degrees of warming, and this will greatly increase agricultural water demands in the region. The strategy of drought relief through increased exploitation of groundwater here and elsewhere in the state has reached its limits.

The drought lifeline afforded by the Colorado River is further shrinking as the climate warms.

Like most of the Southwest, the Colorado River basin has also experienced generally hot and arid conditions over the early 21st century. The flow of the Colorado River has declined and the water stored in its massive reservoir system has dropped precipitously. Lake Mead, the largest reservoir in the U.S., now stands at 37 percent of its maximum capacity.

The Bureau of Reclamation recently projected that by January 2017 the surface elevation of Lake Mead will have fallen to below 1,075 feet above sea level. This will invoke a federal water shortage declaration and a reduction in water appropriations to Nevada by 4.3 percent and Arizona by 11.4 percent. Although California with its senior rights will not take a cut, it is conceivable that there will be political and public pressure on California in terms of its senior rights. In the history of Lake Mead and the Colorado River management, there has never been a water shortage declaration.

Recent research by the Bureau of Reclamation estimates that future climate warming alone will lead to a 10-percent increase in evaporation in Lake Mead as the 21st century progresses. Just as in the case of California’s groundwater, the Colorado River has been oversubscribed and the drought lifeline afforded by the river is further shrinking as the climate warms.

Ten years ago, my colleagues and I framed this situation as a perfect drought that affects local Southern California precipitation, extra-regional supplies from Northern California, and the external supplies from the Colorado River for periods greater than one or two years. What we are experiencing today is indeed a perfect drought, but it is also something beyond that. We looked at Southern California’s perfect droughts as discrete events. Although hydrologically droughts are indeed discrete events, and the current one will come to a close sooner or later, this drought should focus our attention on the fact that things have changed in terms of the context in which these droughts occur. The rising temperatures will year-by-year increase the demands for water, particularly in our agricultural sector, which accounts for about 80 percent of the applied water in the state. Due to the ever-increasing rates of evaporation, each future drought will have a deeper bite than the previous one.

We will not be able to depend on groundwater or external water supplies to see us through future hot droughts.

So, what is to be done? At the household level, we can continue to change our landscaping mix from lawns and other water-intensive plants to increased use of water-sipping native plants. At the municipal level, we can expand the use of recycled water and desalination, which will likely lead to higher water costs. Stormwater capture will also help on domestic and citywide scales.

But the big prize, of course, is agriculture. In many cases water-saving irrigation technologies have already been installed. Now, hard decisions will need to be made about the best crops to grow in a water-stressed environment. These options raise serious economic, rural environmental justice, and food security questions. Some gains can be realized through additional infrastructure for water capture, storage, and distribution. In some cases, though, these infrastructure strategies buck up against important environmental concerns or competing interests, such as the conflict in the Sacramento Delta between water demands of the San Joaquin Valley and Southern California, versus the water rights of local farmers and protection of endangered fish species.

ALSO FROM YALE e360Water in the Bank: One Solution For Drought-Stricken California

A potential answer to California’s severe water shortages is groundwater banking, which involves creating incentives for municipalities, farmers, and other water users to percolate water down into sub-surface aquifers for later use.READ MORE

No matter what we decide to do, we will not, as we have done in the past, be able to depend upon either groundwater or external water supplies to see us through these hot droughts of the future. Should Lake Mead fall below the turbine intakes and lowest outlets of Hoover Dam, at 895 feet in elevation — as some have predicted — the fact that California has senior water rights will be meaningless. With groundwater, we face an agricultural cataclysm if the aquifers in the San Joaquin and other parts of the state should indeed fail.

We need to look at the situation today as representing Tomorrow’s Drought — a view into the hydrological future of California and the West. There is no question we will see similar climatological droughts over the next century. The question is: Will we have the foresight to learn all we can from the current drought and the will to put in place the changes in infrastructure, policy, and public attitudes that will be needed to cope next time around? Whether it is dry again next winter or rains like mad, the hydrological clock is ticking toward an increasingly difficult 21st century. The time to tackle our long-term water challenges is right now.