From Bonneville County, Idaho, to Buenos Aires Province, Argentina, tablet-toting agronomists with Anheuser-Busch InBev — the world’s largest brewer by volume — are visiting farmers who grow the company’s malt barley, a key ingredient in beer. These meetings are a decades-old ritual: Growers review contracts as agronomists offer advice on ways to maximize productivity and profitability. Only these days the conversations are  increasingly steered by a computer app called SmartBarley that farmers use to log details on more than 40 variables that affect barley production, such as variety planted, soil type, and tillage method, along with applications of water, fertilizer, and pesticides. Growers use the platform to compare their practices and yields with other farmers who operate in similar soil and climate conditions. 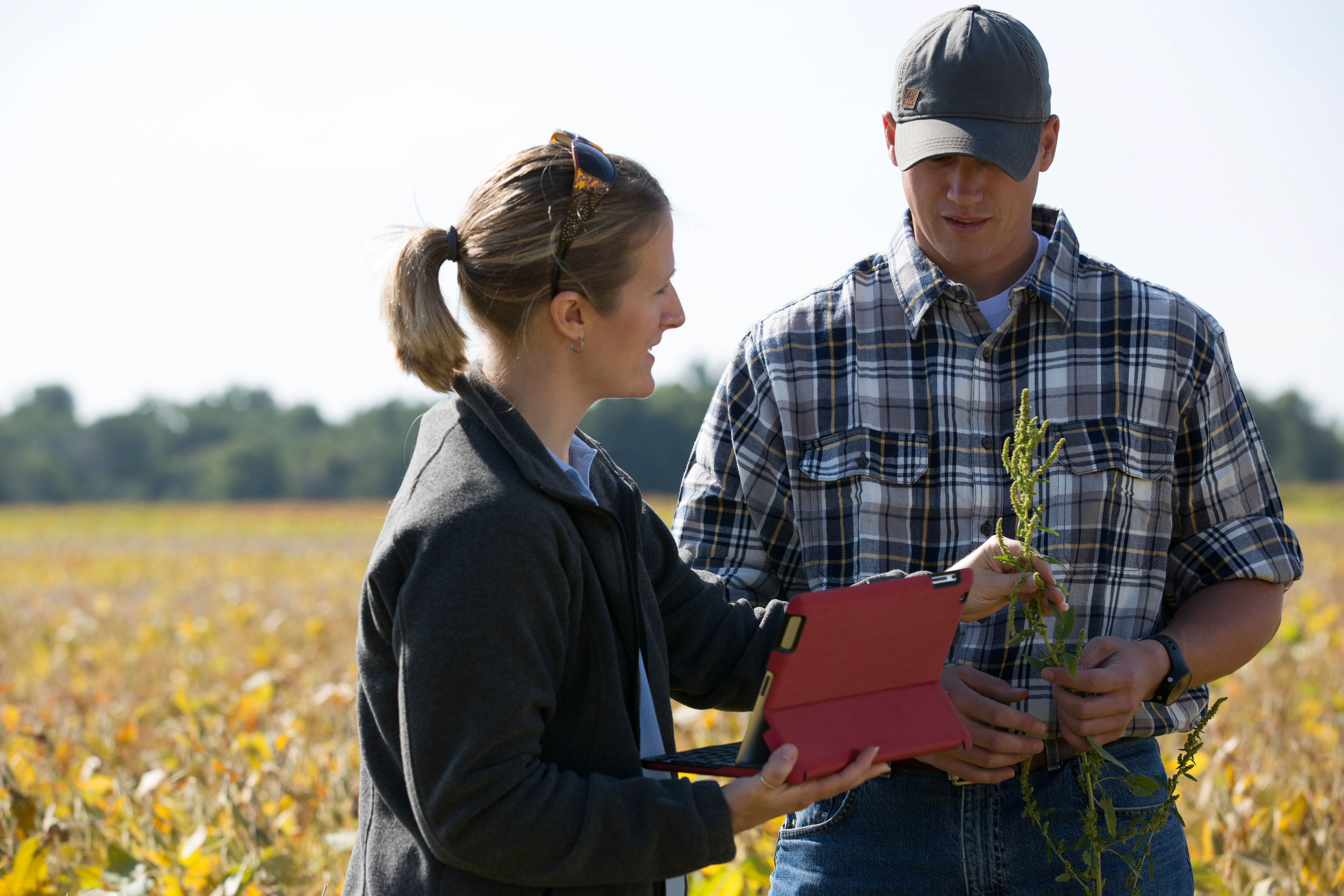 An agronomist and farmer review computer data while inspecting soybeans in Missouri. UNITED SOYBEAN BOARD

The program is one of many agribusiness-led initiatives to harness the bits and bytes of data that increasingly are being used in agriculture worldwide to boost efficiency and profits, while simultaneously lowering the environmental impact of agriculture. Other agribusinesses that market data-crunching farm-management tools include seed company Monsanto, chemical company DuPont, and precision-irrigation company Valley Irrigation. FarmLink, which leases combines, recently entered the data game with TrueHarvest, a yield comparison tool that leverages data collected by its fleet of farm machinery to help farmers fine-tune their operations to maximize yield and profit.

For now, using big data to improve agricultural productivity is largely centered in the developed world. But sustainable agriculture and development specialists are working to expand access to important agricultural data to the hundreds of millions of small farmers in the developing world. Already, in an effort to improve yields and profits, farmers in places such as sub-Saharan Africa and India are using mobile phones to exchange information about weather, disease, and market prices. And these trends are only expected to grow as information technology spreads. Meanwhile, big data advocates argue that smaller farmers stand to benefit from data-driven agricultural advances, such as improved crop varieties.

‘Big data will be essential to bring together all the information that a farmer needs.’

At its core, big data in agriculture is about trying to corral the mass of increasingly available information on the environmental, biological, and human factors that govern crop growth and yield in order to provide farmers with tailored insight on how to grow crops more efficiently. While humans have used accumulated knowledge and technology to grow ever-more food for thousands of years, modern computing power has led to breakthroughs in the ability to collect, exchange, process, and synthesize data in ways that promise to transform agriculture into a sustainable enterprise that meets the projected mid-century food demand of 9 billion people.

But to avoid a massive expansion of agriculture into wetlands and rainforests, to the detriment of biodiversity and the global climate, this yield increase must come on existing farmland. And here, experts say, big data can play a vital role.

“To date, humans have not yet developed agricultural systems that can continue to raise yields and reduce the environmental footprint of agriculture concomitantly,” says Kenneth Cassman, an agronomist at the University of Nebraska. “We have been successful raising yields, or reducing environmental footprint, but not both at the same time, and that is the greatest scientific challenge facing humankind. Big data will be essential to bring together all the information a farmer needs.”

For now, big data is in its infancy, Cassman notes, and current initiatives and products fall well short of their potential. Agribusinesses are primarily developing data services that promote or leverage the products they sell. A seed company, for example, might find in the data an opportunity to sell a drought-tolerant corn variety to a farmer facing increasing irrigation costs. An irrigation company might find an opportunity to sell that farmer a variable-rate pivot, which lowers water usage. The farmer gains from a higher-yielding crop, along with shrinking water and power bills. The environment benefits from water conservation and lower power-sector greenhouse gas emissions.

But the services themselves often are built on proprietary technology that hinders the aggregation and analysis of data flowing from disparate systems. And the quality of data available on everything from weather to soils varies widely, which raises questions about its usefulness. 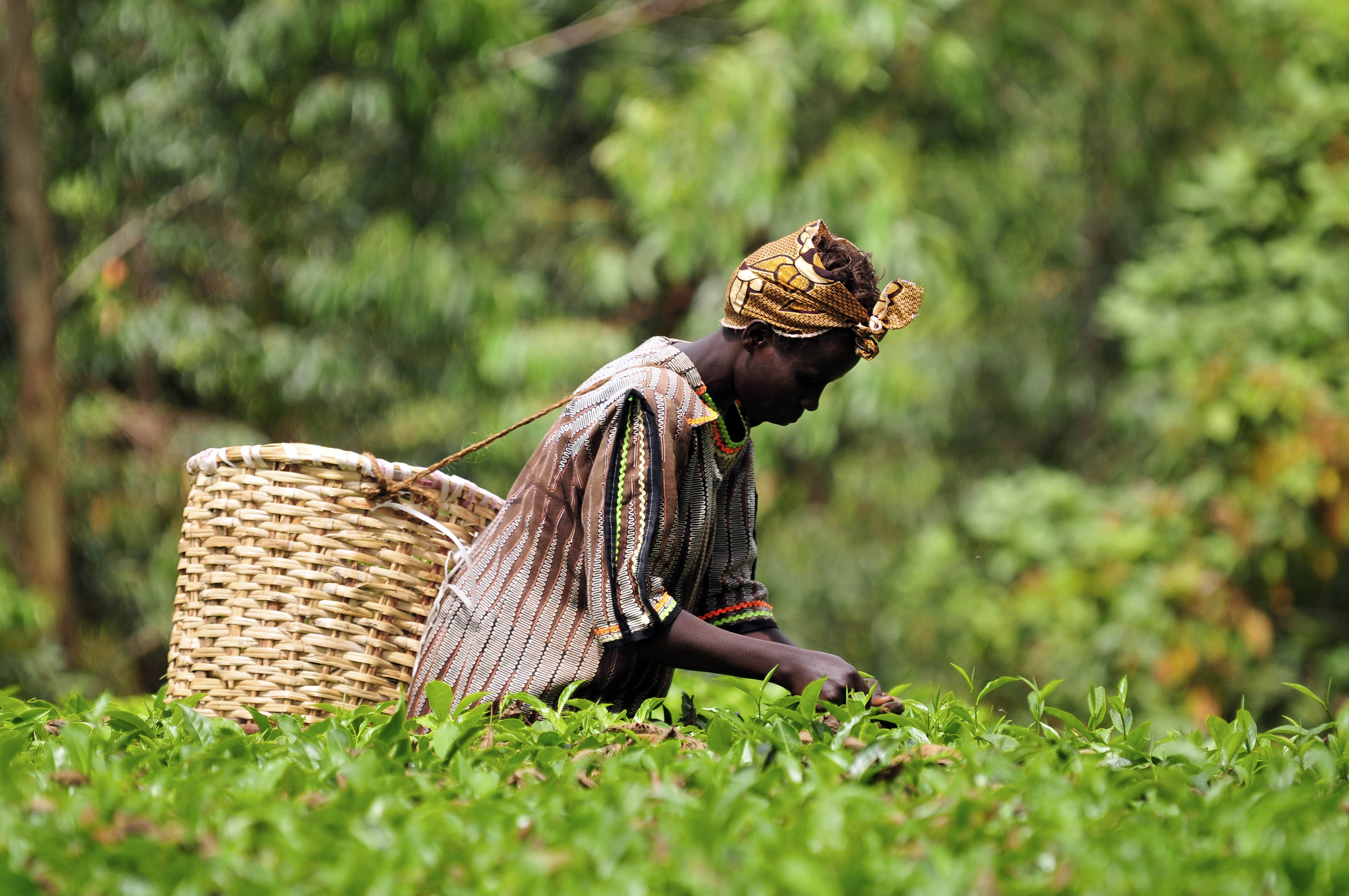 What a data-driven sustainable agricultural system is supposed to look like is also under debate. “There is not even agreement that the issue is only about producing more food,” Jane Maland Cady, International Program Director for the McKnight Foundation, says. For example, she notes, several studies suggest plenty of food is already grown to feed the world and that it just needs to be distributed differently. Cady oversees grants made under the foundation’s Collaborative Crop Research Program, which helps small farmers improve yield. “We see data as a means to better understand and make change,” she notes.

According to the United Nations Food and Agriculture Organization, the world must grow 70 percent more food by 2050 to meet global demand. But “the quantum leaps that we enjoyed with the green revolution 50 to 60 years ago are not going to be repeated,” Cassman says. The triad of improved crop genetics, increased use of synthetic products such as fertilizers and pesticides, and expanded irrigation can no longer provide the necessary gains.

“That is why we need big data,” he explains. “An agricultural system is so finely tuned — it’s responding to temperature, water, humidity, diseases, pests, insects, soil, and nutrients in time and space varying across landscapes, and there is just no other way to do it except by bringing together the data needs so that every field can be managed to bring out its best.”

A multinational initiative is developing software to allow for the flow of agriculture-related information.

Cassman is a co-principal investigator of the Global Yield Gap Atlas, a project funded by the Bill and Melinda Gates Foundation and other groups. The initiative is harnessing data to identify the gaps between current average farm yields and the potential yield in major crop-growing regions around the world. The atlas is a piece of Cassman’s broader vision for a global database populated with publicly available soil, weather, and water data, along with anonymous, farmer-owned and protected data on crop management and yield. When farmers go online and type in their data and geographic location, the database will allow them to compare their management practices and yield against all other similar farms.

“Such a system,” he explains, “would be like having a distillation from hundreds, or thousands, of field experiments to guide future management decisions on each farmer’s field.”

But for the moment, Cassman notes, the road to achieving the vision is a slog. The quantity and quality of the available data is insufficient for farmers to make valid and useful comparisons. And even when the data is created, it is often in a form that is incompatible with data from other sources.

“This widespread incompatibility has left most of the data produced by ag today largely inaccessible, even to the farmer,” Aaron Ault, a senior research engineer with the Open Ag Technologies and Systems Group at Purdue University in Indiana, says. He is the project lead for the Open Ag Data Alliance, a multinational organization that is developing software and standards to allow for the seamless flow of agricultural data. “The biggest hurdle to doing anything with data is simply the handling of it,” he explains. For example, sending an advisor ten years’ worth of yield data is about an-hour-and-a-half job of clicking computer buttons. “There is so much manual intervention necessary to get data from point A to point B that people just don’t do it,” he says.

To overcome data quality concerns, Missouri-based FarmLink controls the aggregation and analysis of the information it uses. In 2011, the combine-leasing company outfitted its fleet with sensors and computers to calculate the yield of every 150 square feet of farmers’ corn and soybean fields. To date, more than a billion records have been collected across 26 states. The data is correlated with 50 variables that affect yield, such as soil type, slope, elevation, sunlight, rain, and temperature. The result is a tool called TrueHarvest, rolled out in 2014, that helps farmers evaluate farm management decisions such as water, fertilizer, and pesticide applications.

The key to the platform’s success, Ron LeMay, FarmLink’s chairman and chief executive officer, says, is quality control. To grow the business, LeMay is considering partnerships with large landowners in South America, where single firms harvest several million acres per year and have years’ worth of proprietary, quality-controlled data about their operations. “With those sorts of firms,” he says. “You get a lot of breadth and a lot of experience and a lot of carefully controlled circumstances.”

One concern is that the data tools will allow industrial-scale farmers to flourish at the expense of small farmers.

The rub for advocates of small farmers, who grow 70 percent of the world’s food, is that data-driven agriculture is mostly focused on conventional, industrial-scale operations. Overlooked are practices such as organic farming and agroecological intensification, which boosts farmland productivity through improved farm management based on enhanced understanding of how natural systems function. These farming practices are proving to be viable and sustainable means to “increase yields, improve water supplies, rebuild soils, contribute to biodiversity, and raise farmers’ incomes,” Danielle Nierenberg, the president of Food Tank, a Washington-based advocacy, says.

Acquiring local data in the fields where these practices are used is an essential component of programs designed to support and evaluate alternative farming practices. Other programs where agricultural data benefits small farmers include the McKnight Foundation’s Agroecological Intensification Exchange , a Web-based platform open to researchers and farmers to share information. Data exchange via mobile phone, says Nierenberg, “makes huge differences and that is only going to grow.”

One concern is that the big data tools will allow industrial-scale farmers to flourish at the expense of smaller farmers. Flush with fresh capital, larger growers can buy out smaller farmers, accelerating the decades-long trend of farm consolidation. To avoid such a scenario, Nierenberg advocates for the democratization of big data — putting the control and ownership of data into the hands of small farmers first.

Cassman says his envisioned global database applies to organic and small farmers, although the impact is smaller. Each conventional corn grower in the United States, for example, would have between 1,000 and 10,000 similar fields for comparison. An organic farmer might have 10. “How we double yields in the next 35 years is if every farmer has access to what is working under their same conditions every year and in real time during the season,” he says. “I can’t tell you how fast that would accelerate the rate of gain in yields. It works best with lots of farmers, but it could also work with small numbers of farmers.”

For the SmartBarley program, Anheuser-Busch InBev chose to forgo a larger-scale program in favor of the data verification and working closely with farmers, says John Rogers, the company’s global director of agricultural development. “There is a lot of information out there in the world that someone can take and maybe not fully utilize, or misinterpret, or misunderstand without the technical advice or guidance behind it,” he explains.

However data is used, he adds, it will transform agriculture over the next decade. Anheuser-Busch InBev recently opened what it calls the Bud Lab on the campus of the University of Illinois at Urbana-Champaign, where data scientists are improving algorithms to analyze factors that influence barley production. The plan is to share those insights via the SmartBarley platform with growers.

“Big data is here to stay,” the McKnight Foundation’s Cady says. The key question, she adds, is, “How do we use it?”