Ye Kaifang says his parents never dreamed he’d become a farmer. They made a fortune selling shipping boxes to computer companies and assumed Ye would take over the family business. Instead, he took his trust fund and used it to buy pigs.

Ye now has 8,000 of them on an 82-acre farm near the town of Cixi in Zhejiang province in southern China. The farm is set in a carefully cultivated green valley that’s quickly transforming from subsistence agriculture into agri-business. His farm is what might be called a Concentrated Animal Feeding Operation, or CAFO, in the United States — an intensive model that’s been heavily criticized by environmentalists.

But Ye, who’s 30, isn’t your typical farmer — he studied business in England and has a bachelor’s degree, and he prefers loafers to boots. His farm is also different than the American pig farms you usually detect with your nose before you see any animals: it smells only faintly of waste. He says that’s because it’s an ecological CAFO, which sounds a bit like an oxymoron. “The whole system is pollution-free, zero-emission, and energy saving,” says Ye. “The key is the biogas digester.” 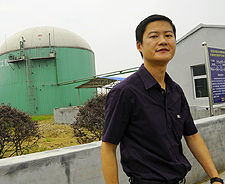 Biogas digestion takes the nuisances of most large animal farms — solid, liquid, and gaseous wastes — and turns them into resources that farmers can use and even sell. Raw pig waste is usually a liability for farmers: It’s full of pathogens and compounds like ammonia that can ruin crops and soil if applied directly. It also is prone to running off into waterways and leaching into groundwater.

Water pollution is rampant in China, and animal farms large and small are a big part of the problem. The 2010 national pollution survey revealed that the livestock industry was responsible for dumping 243 million tons of feces and 163 million tons of urine into water resources in 2007, causing eutrophication and high chemical oxygen demand (COD). Some of that waste eventually ends up in the ocean, where the organic matter, nitrogen, and phosphorus overwhelm the marine ecosystem. The South China Sea today is largely a dead zone with frequent red tides and little remaining life because of run-off from upstream agriculture.

China is the world’s largest source of methane from manure, emitting one-fifth the global total.

Ye thinks his biogas digester may be part of the solution. It cost about $600,000, but Ye only paid for half while the central, provincial, and local governments picked up the rest with subsidies. It is a round green tank about 15 feet high with a bulbous white top. The bottom half is a chamber where wet waste piped from the nearby pig sheds and dry waste delivered from the sheds by trucks are mixed with straw and water. The chamber is airtight, and inside microbes thrive in the anaerobic environment. As they eat away at the waste, the microbes release gases — the stinky ones — which, instead of irritating the noses of neighbors and eventually escaping to the atmosphere, are stored in the spherical upper compartment of the tank. The anaerobic digestion also kills most pathogens, lowers the COD, and makes nutrients better available to plants.

One reason Ye likes the system is that it’s a free source of nutrient-rich fertilizer he can use on crops that he grows to feed his pigs. Unlike American farmers who typically buy animal feed like corn and soy wholesale, some large Chinese farmers grow their own feed — a combination of green crops like alfalfa and ryegrass. Ye calls it “salad for pigs.”

Ye also uses the fertilizer to grow organic vegetables, which he hopes to eventually sell in China and abroad. Though the organic market in China is still very small compared to the United States, he believes that will soon change. “There’s huge demand for high quality vegetables and meat as consumers are growing increasingly concerned about food safety,” Ye said.

The biogas digester also helps him lower his contribution to global warming. Pig waste naturally gives off methane, a greenhouse gas 23 times more potent than carbon dioxide. China is the world’s largest source of methane from manure and emitted roughly 3.8 million tons in 2004 — over one-fifth of the global total. The biogas digester captures the methane and turns it into fuel — essentially, natural gas. Burning it still produces greenhouse gases, but fewer.

Long before climate change created a new impetus to capture biogas on a large scale, Chinese farmers were using biogas as a source of rural energy. The traditional digester is essentially an underground pit for food waste, animal manure, and human feces. It can’t store excess gas the way Ye’s digester can, but it’s fine for cooking and heating. The Ministry of Agriculture estimates about 35 million small digesters are in use in rural areas of China today.

More than half of China’s livestock is produced on those small farms; in the case of pigs, that’s 250 million animals. But the government considers those farms inefficient because they don’t produce enough meat fast enough to feed voracious urban consumers whose ranks are steadily growing. To meet that need, the government is offering incentives to businessmen like Ye to finance industrial-scale farms. “The government wants farms to be big,” says Ye.

Not only does the government want more meat but it also wants more control over farmers. Indeed, officials have struggled for years to stop small farmers from letting their animal waste run off. “The government believes that large scale farms can be more easily managed than small farms because you don’t have so many different pollution points to worry about,” said Tang Zhishao, an official with the Ministry of Agriculture. 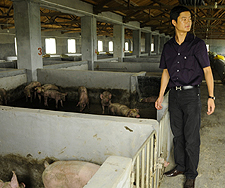 Photo by Eliza Barclay
Ye Kaifang has about 8,000 pigs on his farm in south China’s Zhejiang province.

But even if big farms are easier to regulate, the environmental stakes remain high. Xu Cheng, a professor at China Agricultural University, has estimated that only 3 percent of China’s large and medium-sized livestock operations have facilities to treat animal wastes. To avert future environmental disasters like leaks or spills of wastewater from large farms and to capture methane, the government has decreed that all farms with more than 1,000 cows, 10,000 pigs or 100,000 chickens must install biogas digesters. In Zhejiang province, one of China’s richest and most environmentally progressive, the local government recently decided that all farms with more than 50 pigs must have biogas digesters.

In downtown Hangzhou, the biggest city in Zhejiang, Cai Changda runs a company that has built more than 70 biogas and wastewater treatment projects in China. “The first goal of these projects is to solve the pollution problem,” Cai said. But Cai and others also say that big biogas is increasingly seen as a potentially lucrative opportunity for power generation. China is hungry for power, especially power that’s cleaner than the coal. And biogas is a potentially significant source of cleaner energy. According to the Chinese Academy of Sciences, manure could generate about 130 billion cubic meters of methane annually, the fuel-source equivalent of 102 million tons of coal.

Environmentalists worry about the scale of Chinese farms, which can exceed the largest U.S. operations.

Since 2005, the European Union has had an emissions trading scheme, and biogas projects are among the variety of ways companies are mitigating and offsetting emissions. The United States lacks a trading scheme, but the Environmental Protection Agency has 151 biogas projects on commercial farms as part of its AgSTAR program, a voluntary initiative to reduce methane emissions from farms.

But even if biogas can help a large farm drastically reduce emissions and pollution, some environmentalists are still skeptical of the notion of “ecological CAFOs.” And they worry about the scale of some of the Chinese farms, which exceed even the largest operations in the United States. One example is DQY, an egg producer with a biogas digester outside Beijing that houses 3 million chickens.

Danielle Nierenberg, a researcher on agriculture issues for the Worldwatch Institute, says wastewater from these farms remains a problem even with digesters: The residue is less toxic and dangerous than raw waste but it still has nitrogen and phosphorus — nutrients that are good for soil but pollutants once they enter waterways. And Wu Weixing, an environmental engineer at Zhejiang University, says that the current biogas technology is good at reducing COD but not ammonia and phosphate. “We need even better technology and more land to absorb the nutrients,” said Wu. “That technology exists but it’s still too expensive and people demand cheap meat.”

Tang Zhishao, the Chinese agriculture official, conceded this point as well. “Biogas cannot completely solve the problem of pollution from livestock,” Tang said. “Even the slurry and sludge and residue from the digester are a problem because you need large areas to absorb the waste.” And in heavily-populated China, little land is available. Ye, who grows his own feed on dozens of acres of land, can spread the residue around there, but not all farmers have that luxury.

Big farms also typically rely on antibiotics to keep animals healthy, but the drugs can filter into waterways rendering them less effective for animals and humans. Nierenberg is also concerned that the Chinese may be using biogas digesters to justify building the biggest farms in the world. “They have more animals in their feedlots and farms than we do in the United States,” said Nierenberg. “For China I could see [biogas] as an incentive to have more factory farms and more digesters.”

Back in Cixi, Ye, the pig farmer, remains convinced his farm helps the environment. And with China’s growing demand for meat, he thinks it’s the best model for the future. “Only large farms can ensure environmental protection,” he said. But that’s a theory that young, ambitious farmers like Ye will have to test and prove right or wrong.