Since cholera first erupted from India’s Ganges delta in 1817, the bacterial pathogen has swept across the globe in no fewer than seven worldwide pandemics, afflicting hundreds of millions of people and killing more than 70 percent of its victims within hours if left untreated.â The seventh pandemic — the longest one yet — began in Celebes, Indonesia in 1961, and has spread to more than 50 countries and 7 million people.â That pandemic continues to this day, staking its latest beachhead in earthquake-ravaged Haiti, where a cholera epidemic occurred last year after a reported absence of some 100 years.

Historically and in the modern popular imagination, cholera has been considered a disease of filth carried in sewage. And yet, over the past decade, research on cholera’s natural habitat and links to the climate have revealed a revolutionary new understanding of the disease as one shaped just as much by environment, hydrology, and weather patterns as by poor sanitation. And as temperatures continue to rise this century, cholera outbreaks may become increasingly common, with the bacteria growing more rapidly in warmer waters.

The University of Maryland cholera expert Rita Colwell, a former director of the National Science Foundation, pioneered the study of Vibrio cholerae, the bacteria that causes cholera, in the environment. She andothers have discovered the bacteria in water bodies untouched by human waste, its abundance and distribution fluctuating not with levels of contamination, but with sea surface temperature, ocean currents, and weather changes. After several centuries during which cholera’s spread has been attributed solely to human activity, it has been paradigm-shifting research. “Thirty years ago, we were ridiculed to even say that the bacterium existed in the environment,” Colwell says. “But now it is in textbooks. The evidence is so overwhelming, it is understood.”

While cholera epidemics are caused by multiple factors, of which environmental influences are just one, Colwell and other experts are closely monitoring the potential impact of global warming on the diarrheal disease. “Although there is no clear understanding of the exact nature of the relationship between cholera and climate,” says Tufts University cholera expert Shafiqul Islam, “if climate change leads to more extremes, it will have an impact on cholera.” In fact, it may already have. Over the past 30 years, El Nino events in the Bay of Bengal — characterized, in part, by warmer sea surface temperatures — have increased, paralleling a rise in cholera cases in Bangladesh. The World Health Organization calls it “one of the first pieces of evidence that warming trends are affecting human infectious diseases.”

The growing understanding of the role that climate plays in cholera outbreaks has sparked disagreement between environmental scientists, such as Colwell, and the medical community. While many cholera researchers concur that these environment influences play an important role in the incidence of cholera, especially in places such as Bangladesh and India, most hail from medical fields, which continue to emphasize the role of human activity in the spread of the disease. Scientists such as Matthew Waldor, an infectious disease expert from Harvard University, worry that characterizing cholera outbreaks as a result of environmental influences undermines efforts to prevent the disease using vaccines and other methods. 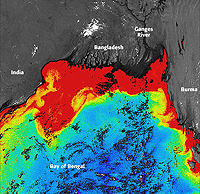 NASA
Phytoplankton blooms, like this one in the Bay of Bengal, are one way that scientists can forecast cholera outbreaks.

And yet, new research on cholera’s links to the environment may help minimize cholera’s damage in other ways. The macro-environmental factors that drive cholera can be tracked using remote sensing data and other forecasting methods, opening up the possibility of an early warning system for cholera. Islam is among several scientists developing methods to use remote sensing data to track the coastal plankton blooms that presage cholera outbreaks. Satellite data on chlorophyll concentrations, a discernible proxy for zooplankton levels, can successfully predict cholera incidence, too. NOAA recently funded the development of a system to predict levels of Vibrio cholerae in the Chesapeake Bay using data on the bay’s changing salinity and surface temperature.

In fact, cholera surveillance teams from the World Health Organization (WHO) have already used El Nino forecasting to help prepare communities for potential cholera outbreaks, including one in Mozambique in 1997, predicted by the WHO based on forecasts of El Nino-related drought in southeast Africa.

What is clear is that populations of Vibrio cholerae in coastal waters, estuaries, and bays rise and fall in association with a range of environmental factors. In Peru, levels of cholera vibrio bacteria have been linked to the temperature of local rivers; in Italy, to the surface temperatures of estuaries along the Adriatic coast. In Mexico, the abundance of cholera vibrios in lagoon oysters rise as seas warm. In the Chesapeake Bay, Vibrio cholerae levels increase during the summer, as water temperatures spike. In Bangladesh, cholera risk increases by two to four times in the six weeks following a 5-degree C (9-degree F) spike in the water temperatureâ . Likewise, in Ghana, an analysis of 20 years of data revealed a correlation between cholera incidence and rainfall and land surface temperatures. In Djibouti, Somalia, Kenya, Mozambique, and Tanzania, cholera epidemics have been correlated with flooding as well as sea surface temperatures.

Global climate drivers such as the El Nino Southern Oscillation and the Indian Ocean Dipole appear to be similarly linked to the incidence of cholera. The El Nino Southern Oscillation — in which warm waters build up in the central and eastern Pacific and the Indian Ocean — creates extreme weather conditions, including floods. El Nino cycles have occurred for centuries, but some scientists believe they will become more frequent and will intensify as the world warms.

‘We could again see epidemics of cholera in the U.S. and Europe that we haven’t seen in 100 years,’ says one expert.

Predicted changes to the climate thanks to global warming may intensify these effects. A 2003 WHO study warned that predicted warming of African lakes, such as Lake Tanganyika, may increase the risk of cholera transmission among local people, and that countries such as Tanzania, Kenya, Guinea-Bissau, Chad, Somalia, Peru, Nicaragua, and Honduras — which suffered major cholera outbreaks after heavy rains in 1997 — may face more cholera epidemics as the climate changes.

Climate change-driven storms, flooding, and heavy rainfall may lead to the spread of cholera in other ways, too. “Extreme weather events can lead to a breakdown in sanitation, sewage treatment plants, water treatment systems,” says Colwell. “And indeed, because the bacteria are part of the natural environment, we could again begin to see epidemics of cholera in the U.S. and in Europe that we haven’t seen in almost a hundred years.”

Climatic and hydrological changes lead to cholera outbreaks by creating the ecological conditions in which cholera vibrios thrive. While Vibrio cholerae has been found free-living in aquatic environments, and clinging to fish, insects, and waterfowl, they are most often found in association with widely dispersed zooplankton called copepods. The vibrios attach to the carapace and guts of copepods, where they replicate and ultimately cover the surface of the female copepod’s egg sack.â

Warm, nutrient-rich water helps promote cholera vibrio growth because it leads to phytoplankton blooms, and within a week or two, corresponding spikes in copepods and other zooplankton that feed on phytoplankton.â Droughts can promote the growth of cholera vibrios by increasing salinity in local waters, which helps Vibrio cholerae attach to copepods, while floods help distribute the bacteria more widely. Climatic and environmental changes may alter the local species composition of copepods, some of which may play a bigger role in hosting cholera vibrio than others, says Colwell’s collaborator, the microbiologist Anwar Huq.

The scientific debate over the relative role of the environment in shaping cholera recently flared into political controversy in the wake of the devastating outbreak in Haiti. Enraged rioters in Haiti blamed the United Nations’ Nepalese peacekeepers and leaky sewage pipes at their camps for contaminating the country with cholera.

‘Cholera cannot be defeated by medicine alone — we need a new approach,’ one scientist says.

Experts such as Harvard’s Waldor agree. “This strain [in Haiti] came from very, very far away,” Waldor says. He was part of a team that found genetic similarities between the strain of cholera in Haiti and ones in South Asia. “If you have the same genomic sequence in two different places like continents, the most likely explanation is that human beings brought one strain to the next,” Waldor says. “That goes back hundreds of years in the history of cholera. Ships from one part of Asia brought it elsewhere… It was spread by humans.”

Colwell doesn’t think so. “To ascribe outbreaks solely to introductions externally is not what modern ecological data tell us,” she says. “The data we’re gathering for the last 40 years show that these bacteria are part of a natural aquatic environment, and the molecular genetic evidence now accumulating is pretty convincing that the outbreaks are local. You can have it introduced, but the big outbreaks are generally local.”

In Haiti, Colwell says, the earthquake washed silt and limestone into the river system, creating the nutrient-rich, alkaline conditions that cholera vibrios thrive in, just as an extremely warm summer set in. Rising concentrations of cholera bacteria coincided with an explosion of malnourished refugees with little access to treated water. It’s a series of events that has triggered cholera outbreaks before, she says.

Colwell points out that the genetic analysis of the strain in Haiti is complicated by the fact that cholera vibrio are genetic rogues, with many mobile elements in their genomes, and the Haiti strain, while genetically similar to a South Asian strain, is also similar to one found in East Africa.â According to Colwell, more research will be required to unravel the true origins of Haiti’s cholera. The trouble is that the very idea of environmentally driven outbreaks “is resisted by the medical community,” she says. “But this is new data. And it is typical, when you produce a new hypothesis, it takes years for acceptance.”

“Physicians are not trained in ecology,” says Colwell, who has taught in medical schools. And yet, “in the twenty-first century of emerging disease, the source is the environment, and animals in the environment… Epidemiology really needs to take into account the ecology of microbial systems.”

That’s not to say that the old truths don’t still hold true. “This is a disease of poverty,” says Islam. The solution, he says, is simple: Clean drinking water, good sanitation, and vaccines prevent the disease, and prompt rehydration treatment and antibiotics cure it.

But with the environment changing, the disease on the move, and poverty still entrenched in many parts of the world, “cholera cannot be defeated by medicine alone,” he adds. “We need a new approach.”