In Zambia during the current planting season, a corn crop will go into the fields that begins the process of rapidly boosting vitamin A content by as much ten-fold — helping to address a nutritional deficiency that causes 250,000-500,000 children to go blind annually, most of them in Africa and Asia. In China, Kenya, and Madagascar, also this planting season, farmers will put out a crop of Artemisia annua that yields 20 to 30 percent more of the chemical compound artemisinin, the basis for what is now the world’s standard treatment for malaria.

Both improvements are happening because of fast-track breeding technology that promises to produce a 21st-century green revolution. It is already putting more food on tables — though it’s unclear whether it can add enough food to keep pace as the world’s human population booms to 9 billion people by 2050.

Fast-track breeding is also giving agronomists a remarkable tool for quickly adapting crops to climate change and the increasing challenges of drought, flooding, emerging diseases, and shifting agricultural zones. And it can help save lives: In the absence of prevention, half those victims of vitamin A deficiency now die shortly after going blind, according to the World Health

Fast-track breeding is a faster and more efficient way of doing what nature and farmers have always done.

Organization; and in 2010, lack of adequate treatment — meaning artemisinin — contributed to the deaths of 655,000 children from malaria.

The fast-track technology, called marker-assisted selection (MAS), or molecular breeding, takes advantage of rapid improvements in genetic sequencing, but avoids all the regulatory and political baggage of genetic engineering. Bill Freese, a science policy analyst with the Center for Food Safety, a nonprofit advocacy group, calls it “a perfectly acceptable tool. I don’t see any food safety issue. It can be a very useful technique if it’s used by breeders who are working in the public interest.”

Molecular breeding isn’t genetic engineering, a technology that has long alarmed critics on two counts. Its methods seem outlandish — taking genes from spiders and putting them in goats, or borrowing insect resistance from soil bacteria and transferring it into corn — and it has also seemed to benefit a handful of agribusiness giants armed with patents, at the expense of public interest.

By contrast, molecular breeding is merely a much faster and more efficient way of doing what nature and farmers have always done, by natural selection and artificial selection respectively: It takes existing genes that happen to be advantageous in a given situation and increases their frequency in a population.

In the past, farmers and breeders did it by walking around their fields and looking at individual plants or animals that seemed to have desirable traits, like greater productivity, or resistance to a particular disease. Then they went to work cross-breeding to see if they could tease out that trait and get it to appear reliably in subsequent generations. It could take decades, and success at breeding in one trait often meant bringing along some deleterious fellow traveler, or inadvertently breeding out some other essential trait. 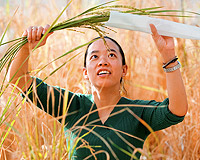 Cornell University Photography Photo/Lindsay France.
A Cornell researcher bags rice plant panicles to prevent cross pollination.
Molecular breeding enables growers to get the improvements they want far more precisely, by zeroing in on the genes responsible for a given trait. If genetic engineering is a tool for “bludgeoning the genome,” as Cornell University researcher Susan McCouch puts it, what molecular breeding does instead is to “open a window” into how the genome works, enabling researchers to collaborate with it.

Sequencing the entire genome of a species is the first step, and this process, which cost millions of dollars a decade ago, is down now to the low thousands. Next, researchers sort out which genes are responsible for a given function, the bottleneck in the process so far, though McCouch says it becomes faster and cheaper with each new species that gets sequenced, because nature tends to employ the same mechanisms from one species to another. Finally, researchers map out markers — bits of genetic material that are linked to those genes, to flag whether or not the desired genes are present in a given individual.

“It’s not uncommon for a company to want to combine 10 or 20 traits in a variety,” says Harry Klee, a specialist in tomato breeding at the University of Florida in Gainesville. In the past, to get the perfect combination of traits using conventional methods, “you would have to put out millions of plants in the field.” Instead, breeders typically simplified, narrowing down their wish list to a few key traits.

With tomatoes, for instance, as many as 30 or 40 different genes influence taste — too many variables to juggle. So shelf life and appearance inevitably trumped taste. “But this is where molecular breeding really pays off,” says Klee. Breeders now use genetic markers to automatically screen one-inch-tall seedlings and immediately weed out the 99 percent they don’t want, cutting years off the breeding timetable. That makes it easier to get to desirable cross-breed quickly — and also stack up a complex array of traits in a single strain. As a result, says Klee, even mass-produced supermarket tomatoes should actually taste good five years from now.

In the two decades since researchers first proposed molecular breeding in 1989, high costs and the difficult work of discovery have largely confined the technology to big companies working in commodity crops like corn and

These methods have the potential to make breeding aim at enhancing biological and agricultural diversity.

soybeans. But as costs fall even faster than Moore’s Law would predict and genetic methods become routine, researchers are now also applying them to the so-called orphan crops on which much of the developing world depends. Molecular breeding is not as effective so far for crops that propagate clonally, including such tropical staples as cassava, sweet potato, yams, bananas and plantains. But for rice and many other crops, it enables breeders to quickly tailor a plant to a particular environment or taste.

“Every village has its own favorite rice,” says Ian Graham, director of the University of York’s Centre for Novel Agricultural Products. “The challenge is if you come up with a great trait, how on earth do you put that trait into all these local varieties easily, economically, and quickly? Sequencing gives you the tool to do it. That’s the secret of really making molecular breeding work for the developing world.” There are still economic barriers, he says, but equipment to set up a basic laboratory in a developing country “is on the order of $100,000 instead of millions.” Thus genetic methods have the potential to make breeding more local, more democratic, and aimed at enhancing biological and agricultural diversity, instead of stripping it away.

The Green Revolution of the 1960s largely achieved its huge leap in productivity by streamlining plants and farming methods to work across hundreds of millions of hectares, regardless of local tastes or environments. It re-designed plants for high-input industrial agriculture, so they could respond to an intensive regimen of fertilizers, water, and pesticides, regardless of the environment. But the molecular Green Revolution will work, says McCouch, by fine-tuning crops to perform in a particular environment, minus additional input. Farmers are backing off growing rice in water, for instance, “because they can’t afford the water, there isn’t enough water in the world.”

Molecular breeding will also build crops, McCouch says, to “respond constructively to changes in the environment that we cannot predict,” like flooding and drought. “A really big challenge in discovery genetics right now,” she says, “is to understand how plants sense environments: How do they count number of days? How do they count the number hours of daylight? How do they know when to grow and when to hold their breath if they’re underwater? Once we make the discovery of which genes allow the

Can ‘Climate-Smart’ Agriculture Help Africa and the Planet?

An idea promoted at the recent Durban talks is “climate-smart agriculture,” which could make crops less vulnerable to heat and drought and turn depleted soils into carbon sinks. The World Bank and African leaders back this approach, Fred Pearce writes, but some critics are skeptical that it will benefit small-scale African farmers.READ MORE
plants to sense these things, then we can do marker-assisted selection” and move those genes into local varieties that already have the other traits farmers want.

The potential for molecular breeding to help farmers adapt to a rapidly changing world became evident last month when Nature Biotechnology published an article about rice breeding in Japan. Geneticists at the Iwate Biotechnology Research Center 130 miles north of Fukushima were already using molecular breeding to improve the cold-tolerant rice variety preferred by farmers there, when last year’s earthquake hit. The subsequent tsunami left a huge swath of rice paddies — 58,000 acres, representing almost a fifth of the nation’s rice supply — contaminated with too much salt for conventional farming. The researchers promptly switched their focus to salt-tolerant genes. Instead of taking five years to produce a suitable crossbreed by conventional methods, they now hope to deliver those seeds to affected farmers in just two years, for the 2014 growing season.