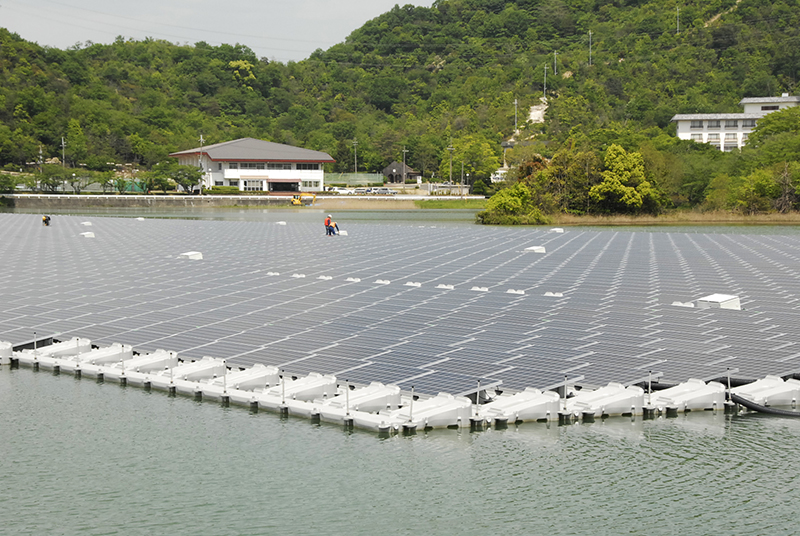 The Colorado River’s two great reservoirs, Lake Mead and Lake Powell, are in retreat. Multi-year droughts and chronic overuse have taken their toll, to be sure, but vast quantities of water are also lost to evaporation. What if the same scorching sun that causes so much of this water loss were harnessed for electric power?

Installing floating solar photovoltaic arrays, sometimes called “floatovoltaics,” on a portion of these two reservoirs in the southwestern United States could produce clean, renewable energy while shielding significant expanses of water from the hot desert sun.

The dual energy and environmental benefits of floating solar arrays are already beginning to earn the technology a place in the global clean energy marketplace, with floatovoltaic projects now being built in places as diverse as Australia, Brazil, China, England, India, Japan, South Korea, and California. And nowhere could they prove as effective as on lakes Mead and Powell, the two largest man-made reservoirs in the U.S.

The U.S. Bureau of Reclamation estimates that 800,000 acre-feet of water– nearly six percent of the Colorado River’s annual flow – is baked off Lake Mead’s surface by the searing desert sun during an average year. Lake Powell loses about 860,000 acre-feet annually to evaporation and bank seepage. Since floatovoltaics can reduce evaporation in dry climates by as much as 90 percent, covering portions of these two water bodies with solar panels could result in significant water savings.

Extrapolating from the spatial needs of floating solar farms already built or designed, the electricity gains from installing floatovoltaics on just a fraction of these man-made desert lakes could be momentous. If 6 percent of Lake Mead’s surface were devoted to solar power, the yield would be at least 3,400 megawatts of electric-generating capacity – substantially more than the Hoover Dam’s generating capacity of 2,074 megawatts.

This solar infusion could give the power-hungry Southwest a major boost in renewable electricity, and at least some of that power could piggyback on underused transmission lines built for the Hoover Dam.

A key selling point of floatovoltaics is the extra energy punch they deliver when compared to terrestrial photovoltaics in a similar climate. Hovering just above sun-shaded lake water, the floating photovoltaic panels would operate at cooler temperatures than solar arrays on desert land – a key factor in improving the productivity of semiconductors, including PV cells. One project proponent expects a 50 percent boost in electricity per watt of installed power from her company’s planned solar arrays at a sun-saturated sewage treatment pond in Jamestown, South Australia.

In Nevada, Arizona, and Utah, those who enjoy boating, fishing, snorkeling, and swimming on Lake Mead and Lake Powell may not immediately embrace the idea of solar arrays competing with their recreational activities. Yet with beaches retreating and marinas strandedon dry land, the benefits of curbing water loss are becoming increasingly clear. Moreover, at a time when some hydrology experts and conservationists are saying that Lake Powell should be partially drained to restore Glen Canyon and salvage Lake Mead, which is about 360 miles downriver, building solar power on a portion of these ailing artificial lakes may seem like a smarter alternative.

Japan has been a pioneer in floatovoltaics. It began modestly, floating enough panels on two reservoirs in Hyogo Prefecture to meet the electricity needs of roughly 920 households. Now it is scaling up. On a reservoir in Chiba Prefecture, a plant slated for completion in 2018 will generate power for nearly 5,000 households. In Japan’s relatively mild climate, preventing evaporation may be less critical than in the American Southwest. But the prospect of tapping solar power without taxing scarce land resources has its own merits in a small, densely populated country that is searching — post-Fukushima — for alternatives to nuclear power.

Floating solar arrays also are being installed on a reservoir in the Brazilian Amazon. About 910 square miles of rainforest were flooded several decades ago when Brazil’s reigning military regime built the Balbina Dam,submerging millions of trees and destroying indigenous homes and hunting grounds. Today, due to persistent droughts and the languid flow of the river that feeds the Balbina Reservoir, the dam operates at only a fifth of its rated power capacity.

Soon, though, an expanding network of floating solar modules may help redeem this failed hydroelectric venture. In its pilot phase, a five-megawatt solar installation will cover an area equal to about five football fields and will generate enough power for roughly 9,000 households.

Later, if all goes well, planners hope to build a massive 300-megawatt project that would produce enough electricity for about 540,000 Brazilian homes.

The list of pending or completed floatovoltaic projects goes on. In India, a pilot-scale installation has been successfully tested on a lake on the outskirts of Kolkata, and developers are negotiating for much larger floating solar plants on lakes in the state of Kerala. In California’s Sonoma County, sewage treatment ponds are now being equipped with floating PV arrays. And in the United Kingdom, Europe’s largest floating solar installation is nearing completion on the Queen Elizabeth II Reservoir outside London. Another is being built on a reservoir near Manchester. There, as in Japan, efficient use of available land resources is a key driver.

Though the U.S. Southwest is far less land-constrained than the U.K., the open desert is coming under increasing stress as solar developers seek suitable lands for their utility-scale projects. Protecting the desert tortoise has been a major concern at some sites, including two photovoltaic plants on Moapa Paiute tribal land in southeastern Nevada, just a few dozen miles from Lake Mead. In California, renewable energy advocates and conservationists have been at serious odds over the prospect of developing large solar sites in desert areas and adjacent lands in seven counties.

Floating solar arrays on reservoirs like Lake Mead and Lake Powell won’t supplant the need for land-based solar in California and other parts of the Southwest, but they can ease some of the pressure on fragile desert ecosystems.

As we confront the mounting impacts of global warming, maintaining a viable balance between water supply and demand in warmer climates will be especially challenging. In the sunny Southwest, reducing water losses to evaporation should be part of a wide-ranging water conservation strategy. Floating solar farms have a role to play, curbing water waste as they produce carbon-neutral power.