When people think of genetically modified organisms, food crops like GM corn and soybeans usually come to mind. But engineering more complex living things is now possible, and the controversy surrounding genetic modification has now spread to the lowly mosquito, which is being genetically engineered to control mosquito-borne illnesses. 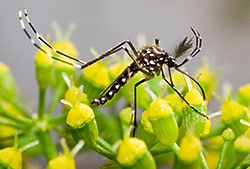 A U.K.-based company, Oxitec, has altered two genes in the Aedes aegypti mosquito so that when modified males breed with wild females, the offspring inherit a lethal gene and die in the larval stage. The state agency that controls mosquitos in the Florida Keys is awaiting approval from the federal government of a trial release of Oxitec’s genetically modified mosquitos to prevent a recurrence of a dengue fever outbreak. But some people in the Keys and elsewhere are up in arms, with more than 155,000 signing a petition opposing the trial of genetically engineered mosquitoes in a small area of 400 households next to Key West.

Many scientists say, however, that genetically modifying the Aedes mosquito — and possibly other types of mosquitoes carrying diseases such as malaria — is a more effective and environmentally benign way of controlling mosquito-borne illnesses than spraying pesticides and other measures. Oxitec’s genetically engineered Aedes aegypti has proven itself in other countries, successfully reducing populations of the insect by up to 90 percent in field trials in the Cayman Islands, Brazil, Malaysia, and Panama. Overall, the trials were so successful that Brazil approved the use of the GM mosquitoes last year.

A genetically engineered mosquito has proven itself in other countries, successfully reducing populations of the insect.

“Some people don’t want to see GE (genetically engineered) anything,” says entomologist Raymond St. Leger, distinguished university professor at the University of Maryland. “It’s an emotional response. It’s hard to reason people out of a decision they didn’t reason themselves into.”

St. Leger is now conducting field trials in Burkina Faso to test a method in which a mosquito is exposed to a fungus that prevents it from transmitting malaria. He says that Oxitec’s technology to suppress the Aedes aegypti has relatively little environmental risk and that knocking back the mosquito in the Keys, which experienced a dengue outbreak five years ago, “is a matter of urgency.

“You don’t want to wait until it’s endemic,” he says. “The gun is there and cocked and waiting to spread through their mosquitos. The extensive program and spraying with insecticides isn’t working. You need to do something now and not wait until dengue is there. It’s a very dangerous mosquito doing pretty well for itself in Florida.”

Tom Miller, a retired professor of entomology at the University of California, Riverside, says that the genetically modified mosquitoes Oxitec uses to control dengue should not be regulated at all. “The method only releases males that do not [bite and] take blood meals,” says Miller. “They seek out wild females of the same species and produce offspring with lethal genes, leaving no survivors. In terms of side effects, it is equivalent to dumping dead insects onto the sidewalk.”

The Florida Keys Mosquito Control District first consulted with Oxitec when 28 people in Key West were infected with dengue in 2009 and 2010 — the first outbreak of the disease in Florida in 75 years. Dengue is also known as “breakbone fever” because it causes debilitating bone pain and flu-like symptoms. A severe form of the illness, dengue hemorrhagic fever, can lead to death, although rarely in areas with good medical care.

No dengue cases have been reported in the Keys since 2010. Since the outbreak, local officials have fought the Aedes aegypti — the primary vector for dengue — using every means possible. They spend $1 million of their $10 million annual budget specifically trying to control this one species. It is one of 46 species of mosquitos that live in the Florida Keys, and accounts for 1 percent of the total mosquito population there.

While other mosquitos are nuisances, the problem of the Aedes aegypti is not the itch. The bug contracts diseases like dengue, chikungunya, and yellow fever from humans and then transmits it to people through bites. Only female mosquitos bite, and while other mosquitoes can take their blood meals from animals like dogs and birds, this species relies on humans to survive. It can fly just 100 to 200 yards, so it lays eggs in water that collects near homes, such as in garbage cans, barrels, or in plants. It’s an invasive species in Florida and likely came to the U.S. from Africa on European ships carrying early explorers. The Aedes aegypti was once eliminated through the use of chemicals like DDT, but the species has re-emerged in Florida over time.

“From a health standpoint, we don’t want to wait until we are fighting the disease,” says spokesperson Beth Ranson, of the Florida Keys Mosquito Control District. “We want to prevent it.”

Technicians now go door-to-door looking for standing water and remove it. They also use bacteria like Bacillus thuringiensis israelensis to kill larvae, spray chemicals into the air to kill adult bugs, and add larvae-hungry fish to eat mosquitoes in abandoned cisterns or fountains. Despite all this effort, they have only reduced the insects by 50 percent over the past several years.

Opponents of the GM mosquito ‘have no argument that makes any sense,’ says one scientist.

“We can’t go everywhere,” says Ranson. “We can’t get onto rooftops. We don’t have access to some properties. But we hope the Oxitec mosquitoes could get to those hard-to-find females and do the work for us.”

Key West resident Mila de Mier started the petition against Oxitec. She lives two miles from the proposed test site and has been outraged by the possibility of trials. She says the local mosquito control has been more than effective. “We have no local dengue now,” she says. “Why do a clinical trial in an area with no dengue? If it doesn’t work, how do you recall it? I don’t want my kids to be laboratory rats.”

Mier says she wonders what might happen to her three kids and two dogs if a lab-grown mosquito bit them — a concern that scientists say is unfounded. She is also worried that other mosquitoes, such as the Asian Tiger mosquito, would move in and fill the void in the ecosystem. Other opponents worry that the modified insect might have some unknown harmful effects on the environment.

But Oxitec and numerous scientists say fears about genetically modifying the Aedes aegypti mosquito are largely unfounded. Since only male GM mosquitoes would be released and only female mosquitos bite, it is virtually impossible that humans would be bitten by a modified female. Even if they were, the health impacts would be no different than being bitten by a non-modified mosquito, scientists say. And the self-limiting gene in the lab-grown mosquito is only passed on to another organism through sexual reproduction; a bird, for instance, cannot acquire the gene by eating the bug.

“The anti-GM mosquito, sterile-insect people have become a lunatic fringe,” says Miller of UC Riverside. “They have no argument that makes any sense.”

The fears expressed by opponents of the GM mosquito initiative in Florida are set against a backdrop of increasing experimentation with genetically modified organisms, says Todd Kuiken, a science and technology expert at the Science, Innovation and Technology Program at the Wilson Center in Washington, D.C. Today 115 different synthetic biology products and applications exist, and they are rapidly advancing.

Some — like a genetically modified, fast-growing salmon — have been languishing in federal regulatory offices for 16 years. Roughly 50 other modified organisms are on the market or close to commercial use. This list includes things like a genetically engineered variety of mustard that is injected with DNA from fireflies; the mustard can then be grown to produce “natural” lighting.

“As more products and platforms move onto the market, there will be increased demand for risk research to underpin regulatory decisions,” says Kuiken. “And as more novel species are developed, eco-evolutionary dynamics will need to be evaluated, too.”

An expert says the main objection to the technology boils down to its newness, rather than scientific merit.

Miller says that the main objection to Oxitec’s technology boils down to its newness, rather than scientific merit. He says that the U.S government has approved similar applications for agriculture, noting that the sterile insect technique that Oxitec adapted to dengue control using modern molecular methods was invented by the U.S. Department of Agriculture more than 70 years ago. It has been used successfully to eradicate screwworm flies from North America and most of Central America and now is used to control a large number of crop insects globally, such as the destructive Med fly.

Miller says that using insecticides is only 2 to 5 percent efficient and has far more serious environmental consequences than genetically modifying mosquitoes.

“Insecticides coat the countryside and always leave a subpopulation of mosquitoes to survive, “ says Miller. He says, research suggests that eliminating mosquitos from urban areas has no negative environmental effects.

“We are introducing a new tool to reduce mosquito populations to trace levels that you can do in conjunction with other prevention and control methods,” says Hadyn Parry, chief executive officer of Oxitec. “With insecticide, you are spraying away and you may have insecticide resistance because populations are not going down. You are killing a number of insect species in a targeted area. There’s collateral damage — while reducing the aegypti species, you are also reducing innocent bystanders and beneficial insects. … Ours is controlled and precise. It doesn’t hang around in the environment.”

Two genetic engineering technologies are currently being used to modify mosquitoes, and both are in the trial stage. One is a self-limiting technology, which Oxitec uses, where the modified mosquitoes contain a lethal gene that is passed on to offspring to prevent the larvae from developing into adults. The other is the gene-drive technology, a much more complex modification in which offspring inherit genes that are then passed on to entire populations. This can essentially immunize the pests from getting disease in the first place. The modified mosquito’s lifecycle is about a month, and the company has raised more than 150 generations with no mutations to the mosquitoes.

ALSO FROM YALE e360Frankenfish or Healthy Food? A Lively Debate on GM Salmon

In an online debate for Yale Environment 360, Elliot Entis, whose company has created a genetically modified salmon, discusses the environmental and health impacts of this controversial technology with author Paul Greenberg, a critic of GM fish.READ MORE

While the Keys do not currently have locally transmitted dengue or chikungunya, pre-conditions exist for these diseases to become endemic, public health experts say. The mosquito contracts the disease virus from humans, and with travel increasing from the Caribbean — especially Cuba — into Florida, scientists are concerned. Both diseases are severely debilitating. Chikungunya is similar to dengue but causes such severe joint pain that patients are often bent over from it. Chikungunya was not found in the Americas until December 2013; within 12 months, one million cases of chikungunya had spread throughout the Caribbean.

The Wilson Center’s Kuiken, who studies the governance strategies of synthetic biology, says the environmental risks of genetically modifying mosquitoes — which could include the impact of eliminating a mosquito species from an ecosystem — have not been well studied. The regulatory process, he says, for GM products lags far behind technological advancement. The U.S. Food and Drug Administration’s Center for Veterinary Medicine has been reviewing the issue of Oxitec’s GM Aedes aegypti mosquito since 2011. But this is the first time they have reviewed GM pest control, and Kuiken says it’s a decision with far-reaching implications.

“Man has been engineering nature and ecosystems ever since we came out of a cave,” says Kuiken. “What is different now is that we are beginning to engineer species. It is a progression on the scale, and it is a big progression.”