If you want to sell electric cars, Israel looks like a great place to start. It’s a small country, with most people clustered around Tel Aviv and Jerusalem. Gasoline costs more than $7.50 a gallon, and oil revenues help support Israel’s Arab foes. So it’s easy to understand why Shai Agassi, an entrepreneur who was born in Israel and made a fortune in Silicon Valley, chose to launch his Better Place electric-car company in Israel, while preparing plans to expand in Europe, Australia, Japan, China, and the U.S.

What’s harder to understand is why things have gone so badly. Better Place, which staked out its position in the electric car market with an innovative battery-swapping technology, has sold only about 750 cars in Israel, while piling up losses of more than $500 million. Agassi was forced out of Better Place in October, his successor as CEO quit in January, and the company has put its global rollout on hold. Better Place needs to raise more money this year, and that won’t be easy, insiders say.

Start-ups often stumble, of course, but Better Place’s woes raise questions that matter to anyone who cares about electric cars and their future in a low-carbon economy. Has Better Place sputtered because of its own mistakes, or are the company’s difficulties a sign of the broader challenges facing electric cars?

Better Place’s woes raise questions that matter to anyone who cares about EVs and their future.

To find out, I spoke to company officials, industry experts, and electric-car executives at rival automakers. And to get a sense of the Better Place driving experience, I took a test drive in the company’s all-electric Renault Fluence EV during a recent trip to Israel, traveling 120 miles round-trip from Tel Aviv to a kibbutz in the Negev Desert.

Agassi, a hard-charging, charismatic software executive, launched Better Place in 2007 with a bold goal: To help end the global auto industry’s reliance on oil. Since then, Better Place has raised about $850 million — an astonishing figure for a start-up — from such sophisticated investors as HSBC Group, Morgan Stanley, General Electric, Vantage Point Capital Partners, and the conglomerate Israel Corp., its biggest shareholder.

When analysts from Deutsche Bank took a close look at Better Place in 2008, they wrote that the company’s unique business model could lead to a “paradigm shift” that causes “massive disruption” to the auto industry, and said the company has “the potential to eliminate the gasoline engine altogether.” Renault-Nissan agreed to manufacture 100,000 electric cars, tailored to Better Place specifications. 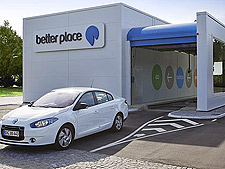 At Better Place’s battery-switching stations, a depleted battery is replaced with a fully charged one in about five minutes. BETTER PLACE

What got many people (including this writer) excited about Better Place was Agassi’s unorthodox solution to the two big problems with electric cars: You can’t drive them very far without recharging, and they are expensive to build because the battery adds $10,000 or more in costs. David Jones, Better Place’s vice president of business development, put it bluntly when we met: “Gas cars are convenient and affordable. Electric cars — prior to Better Place — are neither of those things. They’re not convenient. They’re not affordable.”

The Better Place solution is to literally separate the battery from the car. To make refueling convenient, Better Place invented automated battery-switching stations; they deploy robots that slide under the car, remove a depleted battery, and replace it with a fully charged one in about five minutes. These battery-swapping stations work faster than chargers; the company has built 37 of them across Israel. By retaining ownership of the battery, Better Place is able to reduce the sticker price of the car, and upgrade the battery as the technology improves.

Like wireless phone companies that discount their hardware and make the money back by selling minutes, Better Place reduces the price of the car and charges its owners a monthly fee for the battery and electricity, based on how many miles they travel. The economics make sense, at least in theory, because electric motors are more efficient than internal combustion engines; buying electricity for an EV is the equivalent of buying gas for about $1 a gallon, says the Electric Drive Transportation Association, an industry group.

In fact, leasing a Better Place car in Israel costs about 20 percent less than a Toyota Prius or Honda Insight hybrid, the company says. “The economics of the electric car are fundamentally better, long-term,” says Mike Granoff, a senior executive at Better Place. In his heyday, Agassi liked to tell people that Better Place would eventually be able to give cars away, and still turn a profit.

But such rosy projections never came close to materializing. One of the unexpected things to go wrong was that the company didn’t get much help from Israel. Although Shimon Peres, the former Israeli president, was an enthusiastic Better Place supporter, Israel — unlike the U.S. — provides no subsidies to EVs.

One unexpected thing that went wrong is that the company didn’t get much help from Israel.

Local authorities, whose permission was needed to build battery-switching stations, put up unexpected roadblocks, slowing progress, company officials said. And when employers provide the cars to their workers, which is a common practice in Israel, the workers pay a usage tax that reflects the full value of the car, including the battery, undermining Better Place’s effort to drive down costs.

Another shortcoming: Better Place assumed that other automakers would build vehicles that are compatible with its battery-swapping technology, but so far only Renault has done so. The only Better Place car available is the Fluence, a family sedan that’s too big for some drivers and too small for others. Marketing has been another challenge: The company is asking its customers not only to embrace a new technology, but an unfamiliar business model that is hard to explain. Then, just as positive word-of-mouth about the company began to spread last year, Agassi’s departure cast a pall over the enterprise.

“The model requires a leap of faith on the part of the customer, and many were unwilling to take that leap because of the slowness of Better Place’s development,” said John Gartner, an electric car expert with Pike Research. He said battery swapping might make sense for taxis or fleets, but not on a broad scale.

My test drive with Better Place was a mixed bag. On the round trip from Tel Aviv to the Negev, I had to switch batteries twice, going slightly out of my way both times. That’s far from ideal. On the plus side, the battery-switching station, which resembled an automated car wash, worked perfectly: I was in and out in about five minutes, without having to leave my car. And I loved the instant torque and the quiet of the Fluence EV.

Better Place customers seem to be satisfied, too. “We are all so overwhelmingly happy with the service and the car,” an owner known as Brian of London wrote in a blog post after a recent meeting of owners organized by the company; not surprisingly, the feedback was positive.

Although their numbers are small, electric vehicle owners worldwide are generally happy with the new technology. In the U.S., for example, the Chevy Volt has topped Consumer Reports’ annual owner satisfaction survey two years in a row. The Volt overcomes range anxiety by adding a small gasoline engine to its electric drive train, while the all-electric Nissan Leaf depends on a network of public charging stations. All the companies offer home chargers to their owners.

According to Gartner, the issues at Better Place won’t affect electric cars elsewhere. In the U.S., sales of the Chevy Volt, Nissan Leaf, and Tesla Model S are all growing, albeit off a very small base. “While the payback period for some EVs today is too long, we are still in the early days of the industry,” he says.

Better Place executives, including Agassi and Evan Thornley, who briefly succeeded him as CEO, say there’s nothing wrong with the company’s strategy.

“I continue to believe that the Better Place vision is both accurate and commercially sound, and trust that whatever shortfalls we suffer are correctly seen as errors of execution not of strategy,” Thornley wrote to employees when he left. Mike Granoff told me that “a million things didn’t go right,” but that Better Place’s approach still makes sense. The company sold more than 100 cars a month in January and February, accounting for about 0.5 percent of all sales in Israel. In December, only 23 were sold.

Others, though, say the Better Place story underscores the fundamental challenge facing the electric car. Without battery-switching, pure electric cars have a limited range and they take a long time to recharge.

Self-Driving Cars: Coming Soon to a Highway Near You

Vehicles that virtually drive themselves are no longer the stuff of science fiction, with Google and other companies working to develop self-driving cars. As Dave Levitan reports, these automated vehicles not only offer improved safety and fewer traffic jams, but real environmental benefits as well.READ MORE

“The gasoline fuel tank is a pretty phenomenal storage device for energy,” says Brett Smith, an industry analyst with the Center for Automotive Research. “The battery may never really compare, at least not in the next 20 years.”

Then again, whatever their flaws, there’s no doubt that electric cars generate what economists call “positive externalities.” They’re good for the environment and for a nation’s security because they reduce dependence on oil imports. That’s why the Obama administration, which set a goal of getting 1 million electric vehicles on U.S. roads by 2015, has thrown its support to electric cars, providing about $2.5 billion in loans and grants to electric-car manufacturers and battery makers, as well as $7,500 in tax credits to electric car buyers.

But the administration, as well as the industry, has yet to provide a clear answer to a simple question about electric cars and companies like Better Place: What, exactly, is the consumer problem that EVs are trying to solve? Are they about saving money in the long run, not having to worry about rising gas prices, reducing the environmental impact of driving, or just enjoying the ride? Put another way, if electric cars are the answer, what’s the question?