In early August, a small minke whale washed up on a beach in Chatham, Massachusetts. It was less than nine months old, not even weaned, and the cause of death soon became clear to Michael Moore, a veterinarian and biologist with Woods Hole Oceanographic Institution, who came to perform a necropsy. Fishing line snarled the whale’s snout, threading in and out of its baleen. Skull-bone fractures indicated that it had struggled in the rope underwater. Still, death had come fairly quickly.

“It had a pretty rotten half an hour before it succumbed. But that’s not so bad as a pretty rotten six months,” says Moore. That’s how long he and several colleagues determined it takes on average for at least one species of large whales to die when they become lethally tangled in fishing gear. Big whales are usually strong enough to break free of gear they encounter, but they often carry some of it away with them, bound to limb or jaw. Rope and nets often do the snarling and can bring other types of gear along for the ride, including hooks, buoys, traps, even anchors and other marine debris. Over time, the gear exacts a painful toll. It can slice flesh, deform bone, amputate flukes, and restrict breathing, eating, and swimming as it drags through the water. 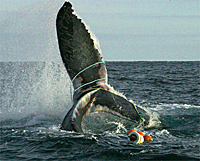 PCCS/NOAA Permit #932-1905
An entangled whale off the Canadian coast in the North Atlantic.

Moore and other scientists say entanglement poses a serious obstacle to the recovery of endangered whales on the U.S. east coast, especially North Atlantic right whales, which may number as few as 444. But in a series of recent papers, Moore has also called attention to the pain that entanglement inflicts on individual whales.

“There are two questions,” Moore says. “Does it or does it not impact the conservation of the species or the population or the stock? And, is the individual animal in welfare extremis. They’re both important arguments, but I think it’s valuable to look at them separately,” he says. “Quite independent of the cost to the population there’s a cost to the individual that as a veterinarian I grieve over.”

That grief and frustration with efforts to prevent entanglement are propelling Moore into some surprising territory. He has argued that whales killed intentionally by harpoon meet far faster and more humane deaths than lethally entangled ones — even though the whaling industry has been criticized for having perhaps the least humane killing methods of any commercial slaughter. The whaling nation of Norway has made hay of this point before the International Whaling Commission (IWC), sparking international attention to the issue.

Entanglement has become a fact of life for large whales. Scientists examining scars on whale skin estimate that 82 percent of North Atlantic right whales and about half of endangered humpbacks between Cape Cod and Nova Scotia have become entangled at least once. Each year an unknown number die. Many of them manage to free themselves. Others receive human help — ideally from trained disentanglement teams because the work is very risky for both the rescuers and the whales.

A study of whale deaths showed that the biggest killer was entanglement in fishing gear.

A paper led by Moore’s graduate student Julie van der Hoop and published this month in Conservation Biology examined all of the 1,762 documented deaths and serious injuries that occurred between 1970 and 2009 in eight large whale species in the northwest Atlantic Ocean. Entanglement in fishing gear was the biggest killer — even bigger than natural causes or collisions with ships — accounting for 43 percent of the cases with a known cause of death. Federal agencies determine the number of individual marine mammals that can be killed without harming their populations; the paper in Conservation Biology found that for both North Atlantic right whales and humpbacks, human-caused deaths regularly exceeded that number.

While entanglement receives the most scrutiny on the North American east coast, scientists are certain the problem is global, albeit severely underreported in many areas. The best estimate is that each year some 300,000 cetaceans (including whales, dolphins, and porpoises) wind up as bycatch worldwide — meaning they are unintentionally killed or seriously injured by the fishing industry.

Numbers tell one part of the story; whale carcasses tell another. In a 2011 paper complete with dozens of grisly forensic photographs, Moore and several colleagues catalogued entanglement injuries in 21 unfortunate baleen whales. Lines worked their way through one North Atlantic right whale’s flipper and embedded three inches deep in the bone. Over a four-month period, lines scraped off a five-foot-wide layer of blubber clear across another’s back, exposing the shoulder blades. The rope was so tight workers heard it snap when they cut it off the body. Ultimately the whales in the study, published in Diseases of Aquatic Organisms, died from drowning, starvation, infection, hemorrhage, or gross tissue damage inflicted by the gear.

Lines worked through one right whale’s flipper and embedded three inches deep in the bone.

Moore’s 2006 paper that found it typically took large whales six months to die once entangled caught the attention of Egil Ole Øen, a veterinarian who advises the whaling industry and indigenous hunters on humane killing methods. Øen, a Norwegian delegate to the IWC, brought entanglement up at the commission’s 2007 meeting and challenged the U.S. government to explain its stance on the issue. Øen says Moore’s work “gave a key… to walk into this very serious issue in a scientific manner.”

The ensuing discussion prompted the IWC to hold two international workshops to develop recommendations for how the commission should address entanglement and how its member nations should respond to entangled whales. One thread of discussion, raised by Øen, is whether to euthanize lethally entangled whales that cannot be freed. Moore, who helped develop whale-sedation techniques to make disentanglement easier, was contracted to review potential euthanizing methods. A bit ironically, the most humane one is arguably the whaler’s grenade-bearing harpoon, though that is unlikely ever to be permitted in U.S. waters, he says. 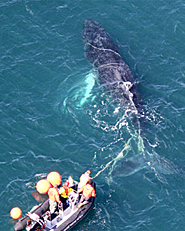 PCCS/NOAA Permit #932-1905
Rescuers free an entangled humpback whale that had been anchored in place for three days.

Though still theoretical, euthanasia of large whales at sea is a tricky subject. On one hand, as Øen contends, it could spare whales months of distress. On the other, when it comes to the survival of endangered species like the North Atlantic right whale, every last animal matters. “This is where the lines between conservation and the ethical treatment of animals become blurred,” says Scott Landry, who directs the East Coast’s main disentanglement program at the Provincetown Center for Coastal Studies. “I really would not want to regret ending the life of an animal that is so incredibly rare. And would I rather it just swim out in the ocean suffering for months and months on end? I’d rather have neither!”

Everyone involved agrees that neither euthanasia nor disentanglement will fix the problem and that prevention is key. But finding a solution has not been easy. Obstacles include an inability to test the effectiveness of new gear, the difficulty of pinpointing where, how, or even how many entanglements occur, as well as strong resistance to new regulation by some quarters of the fishing industry. “Get rid of the rope and you get rid of the entanglement problem overnight,” says Landry, adding that unfortunately thousands of fishermen’s livelihoods are at stake and “we don’t currently understand how you could go fishing without rope.”

Along the East Coast, gillnet and trap or pot fishing gear — and lobster gear in particular — appear to be the worst culprits. Existing U.S. regulations under the Atlantic Large Whale Take Reduction Plan (ALWTRP) have focused on restricting this gear in critical areas and modifying it so whales can more easily avoid or break free of it.

‘There’s not a single lobsterman in Maine who doesn’t feel sick to his stomach to know that’s our gear.’

Many observers are skeptical that those rules are working. The recent Conservation Biology paper shows that the likelihood of a whale becoming entangled rose between 1990 and 2009, despite new Canadian and U.S. regulations during that period. But one of the most important regulations to date, requiring trap and pot fishermen to use rope that sinks to the ground rather than floats to connect one trap to another, took effect too recently for the paper to evaluate.

The gear restrictions and modifications have been expensive, onerous, and even dangerous for lobstermen, says Patrice McCarron, executive director of the Maine Lobstermen’s Association, which has collaborated with scientists to study the problem. “There’s not a single lobsterman in Maine who doesn’t feel sick to his stomach to know that that’s our gear,” says McCarron, “They want to be doing the right thing,” she says, but it’s hard to know if their sacrifices will pay off.

The U.S. National Marine Fisheries Service (NMFS) and an advisory group of about 60 scientists, fishermen, government officials, and conservationists — which includes McCarron and two scientists from the Provincetown Center for Coastal Studies — are now considering how best to reduce the amount of fishing line running vertically between the seafloor and the ocean surface. A so-called vertical line rule is slated for 2014.

David Gouveia, who coordinates the advisory group for NMFS’s Northeast Regional Office, acknowledges the frustration of all involved. Nevertheless, Gouveia says he believes the sinking-groundline and vertical-line rules represent a two-pronged approach that should be given a chance to take hold. He also points out that from a conservation perspective, North Atlantic right whale numbers have been ticking up each year, from at least 291 animals in 2003 to at least 444 in 2012.

For his part, Moore says he is sympathetic to the fishermen’s plight. But he remains unconvinced that anything besides a major transformation of the fishing industry to remove much of the rope from the water will solve the entanglement conundrum, and is increasingly doubtful that the regulatory or legal system will bring that about. Instead, he looks to seafood consumers. If they knew what fishing gear does to whales, he maintains, they’d pressure the industry to change its ways pronto, much as they did in the 1980s when it came to light that thousands of dolphins were being mangled and killed each year by the tuna fishery.

“I’m not a vegetarian. I’m quite happy to see animals being suitably consumed and utilized,” Moore says. “But I don’t see taking six months to die whilst being wrapped up in rope as being an acceptable part of that.”