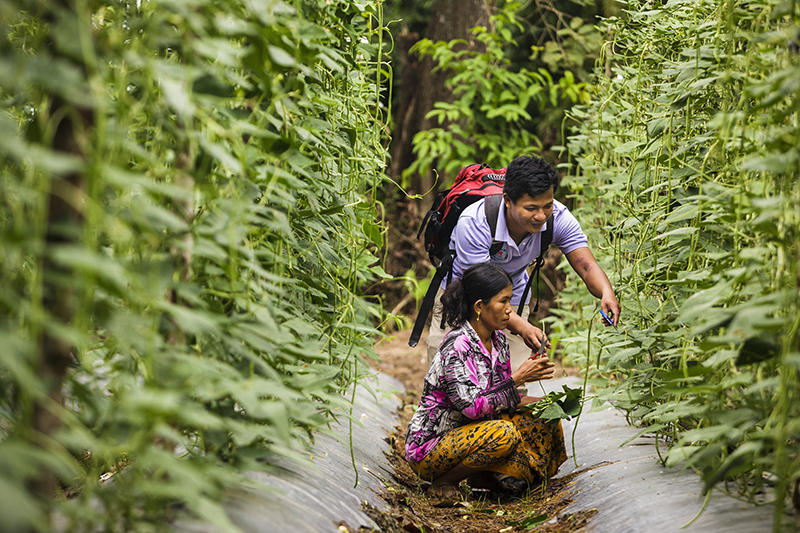 For researchers trying to figure how to feed a world of 10 billion people later in this century, the great objective over the past decade has been to achieve what they call “sustainable intensification.” It’s an awkward term, not least because of conventional agricultural intensification’s notorious record of wasting water, overusing fertilizers and pesticides, and polluting habitats. But the ambition this time is different, proponents say: To figure out almost overnight how to grow the most food on the least land and with the minimal environmental impact. The alternative, they say, is to continue plowing under what’s left of the natural world. Or face food shortages and political unrest.

Up to now, the tendency in talking about sustainable intensification has been to focus on the supply side and on exciting technological innovations of one sort or another, from gene editing to satellite monitoring. In his new book Half-Earth, even E. O. Wilson invokes the idea, not too hopefully, that “a new Green Revolution can be engineered” to spare the half of the world he argues should be set aside for nature.

But achieving consensus about what sustainable intensification should mean — or whether it’s the right objective in the first place — has proved complicated and increasingly contentious. “Depending on how one defines it,” one researcher commented, “I’m in favor of it, or against it.”

To critics, the engineering focus has tended to put intensification ahead of sustainability, making it just a re-boot of the original Green Revolution.

Technological solutions appeal to large farms in the industrial world, which can afford to invest in them.

They say the technological fixes also distract from more challenging social reforms like slowing the rate of population growth, shifting away from crops like corn ethanol that don’t put food on the table, or ending subsidies for livestock production, which currently eats up an appalling 75 percent of the world’s agricultural land. Technological solutions also appeal most directly to large farms in the industrial world, which can afford to invest in them. But the population growth and the clearing of land for agriculture are mainly happening in the developing world.

Fertilizer is a key topic of discussion everywhere — most obviously because sustainable intensification means curbing overuse in the industrial world. The European Union began regulating fertilizer use 25 years ago, to reduce farm runoff that was polluting groundwater and turning water bodies hypoxic. The EU’s Nitrates Directive led to a 30 percent reduction in fertilizer use, even as yields were increasing substantially.

That kind of intensification — more production with fewer impacts — is certainly also possible in the United States. University of Minnesota ecologist G. David Tilman cited, by way of example, multiple studies showing that farmers could get the same yield with substantially less fertilizer, if they were willing to time applications more precisely to the needs of the crop. The pressure to cut fertilizer use is especially urgent in the Mississippi River Valley, where agricultural runoff has created the world’s second largest ocean “dead zone” in the Gulf of Mexico. 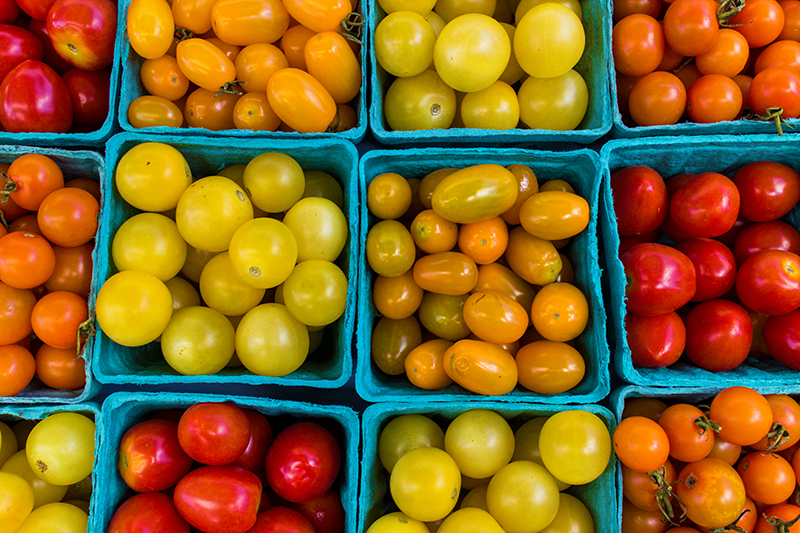 Tomatoes at a farmers’ market in Wisconsin. PATRICK KUHL/FLICKR

So far, state and federal agencies have relied on voluntary efforts to reduce runoff, with little success. But the switch from old- to new-style intensification could start to become mandatory, depending on the outcome of a new lawsuit by the City of Des Moines charging upstream Iowa farm counties with polluting its drinking water and imposing huge filtration costs on city residents.

Even as fertilizer use needs to decrease in the industrial world, sustainable intensification advocates argue that it must increase dramatically in the developing world, where there is a stark choice between intensification and extensification. That is, if a farmer’s land yields only a quarter of what it takes to feed the family, one possible fix is to apply more fertilizer, or plant legumes to deliver a crop that also adds nitrogen to the soil. What often happens instead, though, is that the farmer just clears four or five times as much land.

Intensification turns out to be a lot more nitty-gritty and locally driven in the developing world than in industrial nations. In Zimbabwe, for instance, poor farmers were often unwilling to risk the cost of applying fertilizer to an entire field. But a 2010 study demonstrated that “micro-dosing”— that is, applying fertilizer in minute amounts when planting each seed, or as a top dressing soon after emergence — improved yields by 30-100 percent, with a 400 percent return on the investment.

In Zimbabwe, applying fertilizer in minute amounts when planting each seed improved yields by 30-100 percent.

A new study in Mali worked with farmers to develop a sort of sustainable intensification decision tree: If I am fertilizing the cotton crop, and I have this type of soil, what should I plant in that field next, to take advantage of the nutrient carry-over? In the uplands of Rwanda, “vertical intensification is a great thing,” said Kenneth Giller, of Wageningen University in the Netherlands. Climbing beans fix nitrogen out of the air and produce twice the yield of bush beans, “and it’s a cash crop farmers can sell in the cities.”

Giller, who has worked on agricultural issues in Africa for the past 30 years, says that new technologies often “sound fantastic.” But the companies promoting them “are really not thinking about the context of the farmer.” They’re often geared to a yield-per-acre mindset, when yield-per-workday might be more appropriate, given that farmers in the developing world must often piece together a living here and there from multiple sources.

Solutions from the industrial world are frequently “like developing a product and not doing any market research,” Giller said, or like having a high-speed chip, “but we don’t have a computer to plug it into.” Instead of being about a technology or a product, effective intensification might involve developing a supply chain to get fertilizer to farmers in Rwanda, or connecting farmers with food processors in Ethiopia to develop a market for chickpeas, with one type for domestic consumption and another that “fetches a very good price on the international market.” 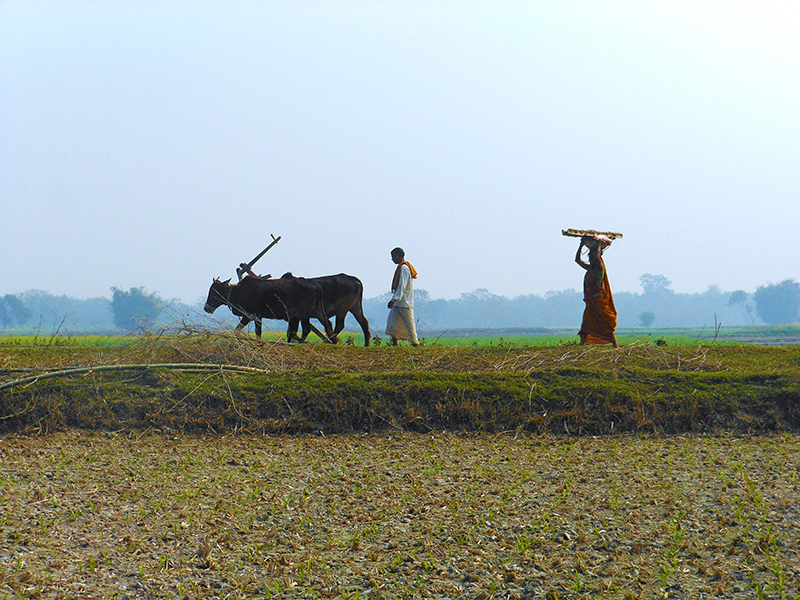 Farmers in Nepal are learning how to produce crops more sustainably and efficiently. DIVYA PANDEY/IFPRI

Or maybe intensification isn’t even the right term for this process. “I see no reason to start with productivity as our focus,” said M. Jahi Chappell, a senior staff scientist at the Minneapolis-based Institute for Agriculture and Trade Policy. “The amount of attention productivity gets is incredibly disproportionate to how important it is and to how effective it is” at improving peoples’ lives. It doesn’t even necessarily put more food on peoples’ tables, he said, especially when it’s geared to export markets.

“Intensification often goes hand in hand with squeezing out the small farmers and landless rural laborers most likely to be suffering from hunger,”Chappell recently wrote on the institute’s website. “In this light, simply producing more cannot be thought of as sustainable without looking at how that food is distributed, who it is distributed to, and who gets to make those decisions ”¦ it cannot simply be left to concentrated and corporate-dominated ‘free markets.’”

In an interview with Yale Environment 360, Chappell cited research by Lisa C. Smith and Lawrence Haddad using data on child stunting as an indicator of how the incidence of malnutrition has changed since 1970 in 116 developing countries. The factors likeliest to improve food security and reduce stunting, they found, were access to clean water, access to sanitation, and female secondary school enrollment, in that order. Improvements to the food supply ranked well down the list, and for Chappell, that means that “increased productivity was the outcome — not the cause — of the improvements.”

But Smith and Haddad also noted one factor that makes the focus on food supply more urgent: It “is arguably the underlying determinant most at risk of disruption from climate change,” they concluded, “and considerable effort needs to be expended to maintain production in the face of these increased uncertainties.”

Maybe all this uncertainty, disagreement, and dread are the reasons one aspect of sustainable intensification — food waste — has gotten so much enthusiastic public attention lately. British supermarkets have recently pledged to cut waste 20 percent (though they granted themselves a leisurely 10 years to do it). And environmentalists and food industry representatives alike have supported new legislation in the U.S. Congress to reform wasteful “sell by,” or expiration date, labeling on food products.

The idea that the world now wastes all the agricultural output from 5.4 million square miles of land — an area almost half as large as the United States — doesn’t just offend common sense and beg for urgent solutions. It may also be the only thing about sustainable intensification — or let’s just call it food security and sustainability — on which almost everyone agrees.