Another global climate conference has come and gone with little action to reduce carbon dioxide emissions, which makes efforts to combat climate change at the national or local level all the more important. After years of bitter debate and haggling, we in Australia last month finally decided to follow Europe in putting a price on carbon. Unfortunately, Australia’s plan, like Europe’s, gave away far too much to major emitters of CO2 and does far too little to reduce emissions, aiming for a 5 percent cut in carbon by 2020, with uncertainty as to how deep the cuts may be beyond then.

Countries that wish to use market-based mechanisms to tackle climate change can learn much from Australia’s example. Unfortunately, most of the lessons relate to what not to do. The final incarnation of Australia’s scheme could have been both economically and environmentally superior had the politics not been so poorly handled. A review of the blunders and miscalculations is instructive.

The price on carbon is too low to transform the way Australia produces or consumes energy.

While the Labor government was initially highly ambitious about the scope of its scheme and the depth of the emission reductions, the longer the debate dragged on, the more watered-down the scheme became. In the end, entire sectors of business, industry, or agriculture were either largely or entirely exempted from needing CO2 emissions permits in the coming eight years. The plan — a hybrid between a carbon tax and an emissions trading scheme — sets the price of CO2 emissions at a fixed level of $23 Australian per ton for the first three years, too low to drive substantial transformation of the way that Australia produces and consumes energy. Prime Minister Julia Gillard says CO2 emissions will be cut by 160 million tons over the next eight years, but that remains to be seen.

After the three-year fixed-price period ends in 2015, market forces will set the cost of pollution permits. However, price caps and ceilings will exist for an additional five years to provide some degree of ongoing price stability. Only about 500 big polluters — those responsible for releasing more than 25,000 tons of carbon dioxide equivalent per year — will be required to purchase pollution permits under the scheme. That sounds fair enough, until you realize that many major CO2 polluters were largely let off the hook for the near future.

For example, agricultural emissions were exempted entirely from the scheme. Big sectors like passenger transport were effectively removed. And Australian exporters were given a huge break, after fervently arguing that the introduction of a carbon price would make them uncompetitive and result in jobs being transferred offshore. Despite the evidence that these concerns were largely exaggerated, the so-called “emissions-intensive trade-exposed” industries succeeded in winning their demands that they be largely exempted from the carbon price. Indeed, these big polluters will not have to pay the carbon price on 94.5 percent of their emissions for the first three years. While the carbon price legislation includes provisions for future review of these generous entitlements to free permits, in practice it will take at least five years to make any real reductions. 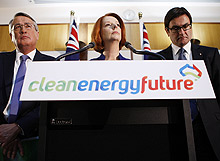 This highlights a key lesson from the Australian debate. The giveaway of so many CO2 emissions permits should have been presented to the public for what it is: lost revenue and a gift to the biggest polluters. Instead, export industries framed the debate as an essential step to protect domestic industry. The tens of billions of dollars in lost revenue associated with the provision of large amounts of free permits is money that the government could have been spent on investing in renewable energy, giving tax cuts to employees, funding targeted cuts in corporate taxes, or providing investment allowances to targeted industries. Such use of carbon tax revenues would have helped create stronger support among segments of business.

As it was, most businesses that were not big polluters were relatively silent about both the desirability of introducing a carbon price and the enormous cost of providing the free emissions permits. Unfortunately, the consequences of providing so many free permits were not usually discussed in such terms — a major mistake.

While there is an economic argument for providing some compensation for some industries, there were no strong economic arguments for providing anything like the level of free permits given to the biggest polluters in Australia. The generosity of the assistance appears to be wildly out of step with the meager compromises made by the polluters. Put simply, if compensation is the price you are willing to pay to get what you want, the Australian taxpayer was willing to pay a lot to achieve very little.

Australia’s carbon scheme will also provide generous compensation to low- and middle- income households; the lowest income earners will receive more than 100 percent compensation for the likely impact of higher energy prices on their household budgets. That said, despite the enormous political outcry about putting a price on carbon, the price impact is likely to be less than one percent, or $9.00 per week, for an average household. Only the highest-income earners will miss out on compensation, but again the price impact is likely to be modest; a household earning $100,000 is likely to experience energy and other price rises of less than $1,000 per year.

Never underestimate the ease with which opponents can attack the details in any scheme.

Critics derided the idea of taking money away from Australian households with one hand, in the form of a price on carbon, and giving it back to them with another, labeling it a “great big money-go-round.” But this is one aspect of the carbon legislation that makes sense. With a price on carbon, those who can change their behavior and use fewer fossil fuels will be better off when they receive compensation from the government. Those who can’t change their behavior need be no worse off.

Another valuable lesson from Australia is to never underestimate the ease with which opponents can attack the details of any scheme — the more complex, the harder it is to sell. When proponents start putting effort into explaining a specific scheme, then by definition they must put less energy into talking about the gravity of the problem it is designed to solve.

Both the Australian government and the Australian environmental movement spent nearly four years talking about the details of an incredibly complex piece of policy, and in so doing virtually stopped talking about the scientific and economic cases for tackling climate change. The abandonment of this terrain enabled the climate and economic skeptics to promote a wide range of entirely misleading — but highly effective — messages, many focused on overstated claims of economic disaster. (A similar tactic was used to kill climate legislation in the U.S. Senate.) Opponents also frequently shifted ground, at first denying there was evidence of global warming, then accepting that there might be warming but repudiating the link to human activity. Some finally accepted that humans might be causing the planet to heat up, but then maintained that Australia is too small to make a difference.

To other countries contemplating a carbon tax or a cap-and-trade scheme, I would offer the following advice: Be less ambitious at the beginning of the project and more determined at the end. Don’t try to take on all the polluters simultaneously, but approach different sectors in different ways at different times. They should be played off against each other on specific issues, rather than united in their hostility toward a general principle.

So where do things stand? The design of the legislation and the determination of the government to provide certainty to industry means it is highly unlikely that there will be any chance to broaden the scope of the scheme — and give it real teeth — before 2020. The debate about the scientific need to tackle climate change has been removed from the political agenda, replaced with economic arguments about whether the compensation is adequate or not.

Meanwhile, as Australia moves ahead with a watered-down plan that ignores scientific evidence about the depth of cuts required to help prevent global warming, the nation’s coal industry — the world’s largest exporter of coal — is experiencing a boom. Australia’s coal exports are expected to double in the coming decade, much of it heading to China, where the emissions will further foul the air of Beijing and Shanghai and add to the heat-trapping gases rapidly accumulating in the Earth’s atmosphere.