Over the last two decades, cattle rancher Carlos Hernando Molina has replaced 220 acres of open pastureland with trees, shrubs, and bushy vegetation. But he hasn’t eliminated the cows. Today, his land in southwestern Colombia more closely resembles a perennial nursery at a garden center than a grazing area. Native, high-value timber like mahogany and samanea grow close together along the perimeter of the pasture. The trees are strung with electric wire and act as live fences. In the middle of the pen grow leucaena trees, a protein-packed forage tree, and beneath the leucaena are three types of tropical grasses and groundcover such as peanuts. 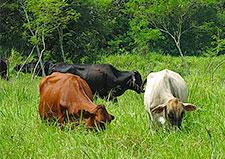 The plants provide his 90 head of cattle with vertical layers of grazing, leading to twice the milk and meat production per acre while reducing the amount of land needed to raise them. His operation is part of a trend globally to sustainably coax more food from each acre — without chemicals and fertilizers — while reducing greenhouse gas emissions, increasing biodiversity, and enhancing the land’s ability to withstand the effects of climate change.

Livestock and their food needs take up 30 percent of land globally, according to the United Nations Food and Agriculture Organization. In Colombia, where cattle occupy 80 percent of agricultural area, pastures have contributed to soil degradation and deforestation and, in dry areas, have hastened desertification, according to Julián Chará, a researcher at the Center for Research in Sustainable Systems of Agriculture, CIPAV, in Cali, Colombia. But a new paradigm is emerging. Land conservation is happening alongside livestock production.

The cost and technical complexities of agroforestry are holding back the movement.

In Colombia, Molina’s brand of so-called “sustainable intensification” is the favored agroforestry practice for livestock production. Agroforestry cultivates trees with food crops or livestock, while farmers make use of the trees’ ecological benefits. Plantains grow above shade-loving coffee. Valuable hardwoods like oak grow in alleys next to corn and wheat.

“People don’t think of ranching when they think of agroforestry,” says David Cleary, strategy director for agriculture at The Nature Conservancy. “But what is happening in Colombia is a reminder that you have to have a broader definition of agroforestry and make it work with any number of agricultural systems. In Colombia, silvopastoral systems are favored because they can work for both smallholder farms as well as large, private-sector-style ranching.”

In addition to the economic benefits of raising more food and timber products per acre, agroforestry is praised for its ability to help farmers, ecosystems, and animals contend with the effects of climate change, according to the World Agroforestry Center in Kenya. Although the advantages of agroforestry are well proven, the cost and technical complexities are among the factors holding back the movement, says Enrique Murgueitio, executive director of CIPAV.

Like many in the tropics, Colombia’s farmers want to increase their productivity and income while reducing their vulnerability to weather extremes and degraded pastures, which have had devastating effects during periods of drought, Murgueitio explained. With silvopastoral systems, cattle ranchers can produce the same amount of dairy, meat, and timber products in half the land area, according to research at CIPAV.

Public-private partnerships have emerged to support the conversion to silvopastoral systems.

Public-private partnerships have emerged to support the conversion to silvopastoral systems. CIPAV — along with Colombia’s Cattle Ranching Federation (FEDEGAN), The Nature Conservancy and the UN’s Global Environment Facility — have invested $42 million in a five-year project to boost sustainable agricultural production in Colombia, according to The World Bank. The money will help 2,000 ranchers with financing and technical assistance to raise cattle using agroforestry practices. Among the goals of the project are to increase incomes from milk and beef production and decrease the use of fertilizers and herbicides by 30 percent.

The government of the United Kingdom also is providing an additional $25 million to support the growth of silvopastoral systems in Colombia and climate programs in Africa.

Using intensive silvopastoral systems, Colombia’s National Development Plan for cattle ranching seeks to reduce pasture land from 38 million hectares (94 million acres) to 28 million hectares (70 million acres), while increasing cattle numbers from 23 million head to 40 million, according to CIPAV. Some ranchers have planted trees and shrubs on grazing land, while others use a “cut and carry” method in which farmers grow fields of trees and shrubs, such as the Mexican sunflower, and distribute the fresh cuttings to cows in pastures.

On his family’s 700-acre El Hatico farm in the Cauca Valley of Colombia, Molina, 55, has reforested two-thirds of his pastures for silvopastoral grazing with the help of his brother, Enrique; his son, Juan José, 28; and farm hands. Some 110 acres remain conventional grassland with large canopy trees scattered throughout.

Molina has trained cattle producers from other parts of Colombia, as well as Mexico and Costa Rica. Additionally, producers in Nicaragua, Panama, Brazil, and Rwanda, as well as more developed countries like New Zealand and Australia, are using intensive silvopastoral practices to increase livestock production and conserve land.

At the heart of Colombia’s silvopastoral system is the leucaena plant, a legume tree whose shoots, leaves, and seed pods pack protein. It also grows like a weed. The plant’s leaves are feathery and allow sunlight to reach grass growing below, but its sturdy branches can withstand hefty browsing by cattle. Bacteria in the nodes of the leucaena roots also “fix” nitrogen up to three feet deep, which helps to fertilize the soil naturally. While conventional pastures require expensive applications of fertilizer and herbicides, silvopastoral systems thrive with little or no chemical additives or irrigation, says Murgueitio. Dense vegetation reduces weed growth and retains soil moisture.

‘Ranchers have this belief that trees and pastures are not compatible,’ says one expert.

In Colombia, planting a silvopastoral system costs between $1,000 and $2,000 per hectare, depending on the combination of trees and shrubs used — 7,000 shrubs, or 5,000 shrubs and 500 trees. For farmers seeking an economic return, one of the immediate benefits of silvopastoral grazing is increased milk production. Within four months of establishing plants and fodder shrubs in her fields, Estella Dominguez said her cows were able to be milked twice a day for the first time ever. And with fewer fertilizers and weed killers to buy, she has made more money. Like Dominguez, most farmers earn a return on their investment in two years.

With so many environmental, ecological, and economic benefits, why haven’t more farmers adopted the practice?

“The biggest barrier is the Marlboro man image,” says Julián Chará, a researcher at CIPAV. Cattle ranching has a five-century history in Colombia. Historically, it’s been a low-cost activity involving one main ingredient: grass. “Ranchers have this belief that trees and pastures are not compatible,” said Chará. “Usually, a farmer will have a large tree in a pasture that provides heavy shade, and under it nothing grows because that’s where all the cattle gather when it’s hot.” The planting of trees and shrubs requires livestock producers to shift their thinking about the value of trees and think more about soil as a living organism that can grow layers of food for cattle, he explained.

With evenly shaded pastures, dairy cattle stay cooler and eat throughout the day. Shade and dense brush retains soil moisture and nutrients and leads to evenly distributed deposits of manure, rather than all in one spot, Chará says.

Until now, neither banks nor ranchers have wanted to invest in planting trees and shrubs in pastureland. High up-front costs have posed a barrier, in addition to the expertise needed to plant and maintain the trees. Amy Lerner, a researcher at Princeton University who has been studying agroforestry in Colombia, cited another issue. Most land ownership in Colombia is informal, she said. Because titles are not recorded by small holders, banks cannot grant loans for planting trees and improving pastures.

Nevertheless, investment in agroforestry systems is increasing, thanks to new incentives, real gains with sustainable grazing systems, and the risks associated with maintaining the status quo in an era of climate change. Fabiola Vega stumbled onto the idea of raising livestock with agroforestry methods in 2012 when she heard a presentation at a community meeting on how to sustainably raise cattle. Right then she decided to intensify her cattle production. Her farm, La Cabaña, is located in the Andean foothills of the northern Cauca Valley in Colombia. Previously the region was primarily known for its coffee plantations, but weather extremes and climate change have taken a toll, she said.

“I was hardly getting a return on my coffee investment, so I bought a herd of cows to diversify,” she says. Then, with a $20,000 loan backed by the Global Environment Facility and the World Bank, she bought trees and shrubs and replaced barren hillsides — once planted with coffee — with Mexican sunflower bushes, leucaena trees, and guinea and star grasses. Her cattle thrived. The landscape now provides environmental benefits such as water conservation and forest cover, and her loan was discounted 40 percent by the GEF/World Bank fund. Vega, who bought La Cabaña 22 years ago with coffee profits, will only need to pay back $12,000. More importantly, she said her farm is now economically stable. The calving rate of her cows was 100 percent this year. (The average for conventional cattle ranches is 52 percent, according to CIPAV).

Enrique Murgueitio of CIPAV says that science-based solutions like silvopastoral systems are only now beginning to fulfill their potential as climate risks are becoming clearer. “Agriculture and livestock producers in tropical regions are most affected by climate change,” said Murgueitio. “Erratic weather and periods of extreme events such as the La Niña of 2010 and 2011 meant huge losses and steep drops in yields in Latin America. Those using silvopastoral systems were insulated from the effects.” Since cows have shade as well as food in agroforestry systems, many using silvopastoral techniques didn’t need irrigation during the La Niña drought.

Murgueitio says that some people may scoff at the sustainability innovations in cattle production because emissions from ruminants are one of the largest sources of greenhouse gases. Yet cattle raised using silvopastoral techniques can digest the forage more easily and reduce their methane emissions by 20 percent, according to researcher Michael Peters of the International Center or Tropical Agriculture in Cali, Colombia. The systems also enhance carbon sequestration in both trees and soils and reduce the need to use fire for pasture management.

“Cattle ranching is seen as eco-bad no matter what,” says Lerner of Princeton University. “But there is a huge portion of global land area in pasture. Is there a way we can make these pastures better?”