As climate change accelerates, scientists are focusing on the key role the world’s oceans play in absorbing half the planet’s carbon dioxide. But the precise mechanisms by which the oceans remove carbon from the atmosphere, the limits of that process, and the consequences for marine life remain poorly understood compared to the terrestrial carbon cycle.

That has led Tracy Villareal, a professor of marine science at the University of Texas at Austin, to devote his research to diatom phytoplankton, the tiny, marine plant species that are as critical to sucking up carbon from the atmosphere as the world’s forests. To better understand precisely how diatoms sequester carbon, Villareal has become a pioneer in the use of a wave- and solar-powered ocean-going robot, known as the Wave Glider. The surfboard-sized robots are packed with sensors and communications gear and can operate autonomously at sea for up to a year, enabling Villareal to deploy them in remote locations to monitor diatom blooms — at a fraction of the cost of a manned research vessel.

In September, Villareal won the PacX Prize, a contest sponsored by the maker of the Wave Glider, Silicon Valley-based Liquid Robotics. He received a $50,000 research grant and six months’ use of Wave Gliders to conduct his research.

In an interview with Yale Environment 360 contributor Todd Woody, Villareal discussed why unlocking the secrets of diatoms is critical to understanding climate change and how deploying robots will revolutionize marine science. “The [impact] is going to be enormous,” says Villareal, “because for the first time we can get out there and just sit if we need to.”

Yale Environment 360: What is the role of diatom phytoplankton in the ocean ecosystem?

Tracy Villareal: Diatoms are one of the primary food producers in the ocean, about 30 to 50 percent of the primary production. Diatoms get eaten by small animals, which are then eaten by larger ones. Or they can get eaten directly by fish like anchovies or sardines. They’re a major part of the food web in many parts of the ocean.

With ocean acidification, we’re getting changes in things that directly affect phytoplankton.

e360: Why are phytoplankton important to understanding climate change’s impact on the world’s oceans?

Villareal: Phytoplankton are a really important player in how carbon cycles between the atmosphere and the ocean and the deep sea. They’re the grass of the sea. They take the carbon out of the atmosphere and package it so it’s eaten or it sinks directly to depth and is sequestered.

e360: Do we know what percentage of CO2 has been removed more or less permanently by sinking?

Villareal: Permanent has different meanings. There’s permanent removal to the sediments, which is removal for many thousands of years. Then there’s just transporting it to the deep ocean, where it can take centuries to a thousand years before it gets back to the open ocean. So it’s gone for a practical time scale for humans. Burial in sediments is for really long time scales. We’re talking hundreds of thousands of years to millions of years. 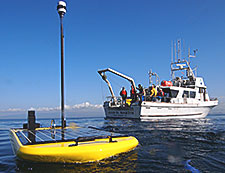 Villareal will use robotic Wave Gliders to monitor the development of diatom blooms. LIQUID ROBOTICS

e360: So in other words, understanding the processes of phytoplankton and how much carbon they absorb is going to give us greater insight into the impact of climate change on the oceans?

Villareal: Yes, it gives us a very good idea of how much CO2 is going to be left in the atmosphere to modify the earth’s temperature and also how much is going into the ocean that will affect acididity. And anything that isn’t removed in a particulate or organic form will stay as CO2 and change the pH, which is changing measurably.

With the effects of ocean acidification and changes in the heat content of both the ocean and the atmosphere, we’re getting changes in all sorts of things that directly affect phytoplankton. It affects how stable the water column is and how shallow the fixed layer is in capturing nutrients in the deep ocean. And how currents are moving things around. And that of course is a pretty important component because as the phytoplankton rise and fall in the ocean, it affects all the food web downstream.

Over the large scale of the ocean, with changes in stratification and nutrient flux at depth and where the currents are going, it’s predicted that the oceans are going to have less phytoplankton in surface waters.

e360: In your own research, what’s the big question or questions you’re trying to answer about phytoplankton?

Villareal:For me, it’s the role of these open-ocean diatoms. While they are not nearly as abundant there as in coastal zones, the ones that are out there actually play a really significant role. There is a nitrogen-fixing symbiosis between diatoms and blue-green algae that create these open-ocean blooms. In the Pacific, these blooms seem to transport about 20 percent of the total annual carbon flux to the bottom of the ocean. They do it in a single big pulse in the July-August time period. This is a pretty big chunk of carbon going to the bottom, and it’s available for feeding the food web. What doesn’t get eaten removes carbon from the atmosphere, and that CO2 is now trapped in the deep ocean for millennia.

Because the ocean is so big and so remote, it takes a lot of resources to get out there.

e360: Since these blooms occur in the deep ocean what has been the challenge of studying them?

Villareal: Money is the source of all problems in marine science. Because the ocean is so big and much of it is so remote it just takes a lot of resources to get out there. Ships are expensive and once you get there you want to make sure you have adequate resources, a good team to do something that is actually meaningful. So we have teams of people that specialize in various aspects so we have a lot of talent to bring to the problem.

A research vessel can cost $30,000 to $50,000 a day. And the study sites I’m going to in the north Pacific are about three days north of Hawaii. We’re talking about $180,000 just to get to the party. And then you’re spending 10 days out there and now you’re looking at half a million dollars. It can be a challenge to get out there every year.

e360: Then you have to hope conditions are right for what you want to study.

Villareal: That’s right, as many of these diatom processes are time-specific. I have to get out there at the right time of year, particularly for these processes that lead to these massive diatom blooms — those diatom dust bunnies. When the diatom dust bunnies head to the bottom they do it at very specific times of year. It’s about a 60- to 90-day window.

We’ve had such a difficult time being at the right time and right place to study them. And then you just get a snapshot of a process that may be going on for a week or a month. So you capture one piece of it. What is almost impossible to get is to observe the conditions before the bloom starts. That has just been completely impractical to address.

We can send the Wave Gliders back out there and do surveys over time.

e360: But that is going to change with your use of the Wave Gliders. What impact will access to those robots have on your research?

Villareal: Well, it’s going to be enormous because for the first time we can get out there and just sit if we need to. The Wave Gliders are a little slow so it will take us a month or so to get to the study site and a month to get back, but that gives us another four months to go up there and just hang out. We can do surveys back and forth across the subtropical front, and we can sit there and wait for blooms to develop. Then we can send the Wave Glider back there and do surveys over time, observe the change in dynamics, what the players are in this process, and what is responsible for the signal that causes the bloom. So when we get ship-time to go out there we’ll have a much better idea of what to be focusing on.

e360: What are some of the challenges of using robots for remote research?

Villareal:Money. They’re much cheaper than ships but they’re not free. Once you get the glider out there, there are challenges in instrumenting the glider to measure the right things. When you’re doing remote sensing, you only can measure what you came out to measure, and if you picked the wrong instrument you can miss something completely. I really need to count phytoplankton to see what’s in the water. And that requires optical systems and optical systems are particularly prone to fouling, which creates a lot of uncertainty in the data stream. You have to keep the instruments calibrated so you can trust the data.

The way I want to approach this is as if you were NASA and this is a mission, so we don’t have to relearn the hard lessons NASA learned about sending something out there you’re never going to see again. But we do get the gliders back, which is an advantage of working on planet Earth.

e360: Just as remote spacecraft have revolutionized our understanding of the cosmos, do these robots have the potential to do something similar for the oceans?

Villareal: I think so. There are all sorts of wild robotic systems under development. For instance, I’ve seen a demonstration of a robot sailing vessel that transforms at the push of a button into a torpedo that can dive under the ocean. That’s pretty cool.