Twenty years ago when an epic clash over the logging of ancient redwood forests roiled California, the battle lines were clear-cut.

On one side stood a Texas corporate raider who acquired the Pacific Lumber Co. in a junk bond-fueled takeover and began felling vast swaths of primeval redwoods to pay off the debt. On the other side was Earth First! and other grass-roots greens who staged a campaign of civil disobedience to disrupt the logging. And while mainstream environmental groups may have looked askance at such tactics, they supported the cause in the courts, suing to stop the clear-cutting of ancient trees.

Today, another monumental environmental fight is unfolding in California over plans to build dozens of multi billion-dollar solar power plants in the Mojave Desert that could power millions of homes. But in this battle everyone is wearing green — from the solar developers seeking to generate carbon-free electricity, to feuding factions of environmentalists split over developing the desert.

For some, the desert is untouchable; for others, it’s a resource to be tapped.

The Mojave has become a metaphor for an existential crisis in the environmental movement as it tries to balance the development of renewable energy with its traditional mission to protect ecosystems. In recent years, the movement’s focus on wildlife, habitat preservation, and pollution has been eclipsed by the climate change imperative. National groups like the Natural Resources Defense Council, the Environmental Defense Fund, and the Sierra Club have joined with the more forward-looking members of the Fortune 500 to push cap-and-trade legislation and other climate-change initiatives and to promote alternative energy.

These disparate interests also have worked together to identify suitable areas to build large-scale solar farms. Over the past few years, Goldman Sachs, utility giants Pacific Gas & Electric (PG&E) and FLP Group, and a slew of Silicon Valley-backed startups have filed applications to build solar power plants on hundreds of thousands of acres of federal land in California’s Mojave Desert and across the desert Southwest.

In December, this coalition found itself outflanked by a small Southern California group called the Wildlands Conservancy that persuaded U.S. Sen. Dianne Feinstein to introduce legislation banning renewable energy development on more than a million acres of the Mojave — including the land on which PG&E and others had set their sights. While hundreds of thousands of acres remain in the Mojave for potential solar farms, the area targeted by the Feinstein legislation had been particularly valued by developers for its proximity to transmission lines and the huge Southern California market.

Elsewhere in California’s deserts, solar power plant projects have become bogged down as grassroots advocates challenge their impact on water resources, desert tortoises, and other rare animals and plants that inhabit a fragile arid ecosystem. For some, the desert is iconic and untouchable; for others it’s a vast resource to be tapped.

Flickr/Bill Wight
After the Energy Policy Act of 2005 opened up the desert Southwest to renewable energy development, a solar land rush ensued.

When Feinstein, a California Democrat, first indicated she favored walling off a large swath of the desert from renewable energy development, Governor Arnold Schwarzenegger growled, “If we cannot put solar power plants in the Mojave Desert, I don’t know where the hell we can put it.”

I trekked into the desert to see for myself. A few days before Feinstein introduced her bill last December to create two new national monuments in the Mojave, I met David Myers, executive director of the Wildlands Conservancy, in Barstow and we set out for what he hopes will become the Mojave Trails National Monument.

You may never have heard of Myers, but the ardent conservationist has emerged as renewable energy power broker thanks to his connections to Feinstein and David Gelbaum, a press-shy Southern California financer turned philanthropist who bankrolls the Wildlands Conservancy. (So secretive is Gelbaum that a confidentiality agreement bars Myers from acknowledging his existence as a donor. Federal records show, though, that Gelbaum sits on Wildlands’ board.)

‘You couldn’t put a project in a worse area from a landscape connectivity point of view.’

A decade ago, Gelbaum — who has given $100 million to the Sierra Club, according to a 2004 Los Angeles Times story — contributed tens of millions of dollars for the Wildlands Conservancy’s acquisition of a half-million acres of former railroad holdings owned by the Catellus Development Corp. The Catellus lands form a checkerboard of 640-acre parcels across the Mojave. Feinstein, who sponsored the 1994 legislation that created Death Valley and Joshua Tree national parks and the Mojave National Preserve, pushed for federal matching funds to complete the purchase of the land, which was then donated to the government for preservation.

But after President George W. Bush opened up the desert Southwest to renewable energy development in 2005, a solar land rush ensued, as developers proposed building some two dozen solar power plants and wind farms on federal lands that include the donated Catellus property. Myers then contacted Feinstein about preserving the lands by putting them into a vast new national monument.

“Al Gore called these lands out here some of the most pristine and scenic desert lands in the world,” says Myers as we cruise down Route 66 in his Subaru. He pulls over and we walk across the road to take in the sweep of the Sleeping Beauty mountain range that rises from a broad valley where BrightSource Energy and other solar developments had proposed building massive solar power plants.

“You have this incredible landscape of these bighorn sheep corridors back and forth across the valley,” says Myers. “You couldn’t put a project in a worse area from a landscape connectivity point of view… It’s a philosophic non-sequitur that you can destroy hundreds of thousands of acres to save the Earth from global warming.”

The vistas and wildlife in this stretch of the Mojave are indeed spectacular, if not totally pristine — power lines march across the desert floor and some ranges are scarred by mining operations. 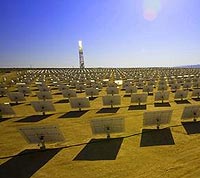 BrightSource
BrightSource Energy, which built this demonstration solar complex in Israel, has filed an application to build a 400-megawatt solar power plant in Southern California.

Establishment environmentalists tend to dismiss Myers as a “purist” who is unwilling to consider solar development in the desert.

“I don’t think many in the environmental community share the extreme views of people like David Myers — I think he’s an outlier,” says John White, executive director of the Center for Energy Efficiency and Renewable Technologies in Sacramento, which is involved in a state-federal effort to identify desert areas suitable for solar development.

The soft-spoken Myers is no Earth Firster. He says he supports solar development in other parts of the Mojave but prefers power plants be built on degraded farmland, or better yet, through a massive expansion of rooftop solar arrays. The Feinstein legislation includes provisions designed to speed up the licensing of renewable energy projects on federal land elsewhere in the desert and provides incentives to developers who build on former farmland.

“We don’t have to choose between having renewable energy development or complying with the Endangered Species Act,” says Johanna Wald, a senior attorney with the Natural Resources Defense Council in San Francisco who is also participating in the solar planning process. “We can have them both, and certainly the California experience is that we have the resources to do both.”

Still, Myers has thrown a monkey wrench in plans to tap about 10,000 megawatts of electricity in this area before its environmental value could be formally evaluated, as is being done elsewhere in the Southwest. While the monument legislation’s success is by no means assured, most of the solar developers — including BrightSource Energy, Goldman Sachs, and Tessera Solar—had abandoned their projects before the bill was formally introduced in late December. No one, it seemed, wanted to take on Feinstein, who first raised concerns about the projects last spring.

“Senator Feinstein’s proposal created a fair amount of uncertainty and we wanted to collaborate with the senator and make sure we were investing our time and effort in the area with potential to go forward,” Sean Gallagher, Tessera’s vice president for regulatory affairs, told me in December after the company canceled its plans for a massive 12,000-acre solar farm, whose peak output would have equaled that of a nuclear power plant.

PG&E, FPL, and Iberdrola Renewables, the Spanish renewable energy giant, say they are either cautiously proceeding or re-evaluating their Mojave projects in light of the legislation. Most developers have staked multiple land claims elsewhere in the Southwest. (That, of course, doesn’t mean they’re happy about the situation. “Iberdrola Renewables believes the environmental community is taking away one of the few places in the U.S. suitable for utility-scale solar development,” Jan Johnson, a company spokeswoman, wrote in an e-mail.)

So we return to the governator’s question: Where can you put a solar power plant?

That question was being debated last month in Sacramento at California Energy Commission hearings on the state’s first new solar power plant to undergo licensing in two decades.

In August 2007, BrightSource Energy, an Oakland, Calif.-based startup, filed an application to build a 400-megawatt solar power plant in the Ivanpah Valley — an area outside the Feinstein monument area — just over the Nevada border in Southern California.

For one project, the state ruled desert tortoises must be removed and new habitat purchased.

BrightSource — which is backed by Google, Morgan Stanley, and a clutch of oil companies — has signed contracts to deliver 2,600 megawatts of electricity to California utilities, which is needed to secure 24,000 megawatts of renewable energy by 2020 to meet state mandates. John Woolard, BrightSource Energy’s chief executive, alluded to the difficulty in finding suitable desert land for solar power plants. “Frankly, it says a lot that Ivanpah’s the only site that we think we’re able to build on right now inside of California,” he said.

The surrounding desert landscape would not inspire Edward Abbey. Interstate 15, which connects Los Angeles to Las Vegas, slices through the area. A few miles from the BrightSource site, Buffalo Bill’s and Whiskey Pete’s — two hulking casinos connected by a monorail — rise from the desert like an apparition from a Mad Max movie. Adjacent to the solar site sits a 22-acre golf course that consumes a half-billion gallons of water a year. To the west are two mines and a pipeline that carries mining waste to an evaporation pond.

After an extensive two-and-a-half-year environmental review, the energy commission concluded in late 2009 that the BrightSource project “would have major impacts to the biological resources of the Ivanpah Valley, substantially affecting many sensitive plant and wildlife species and eliminating a broad expanse of relatively undisturbed Mojave Desert habitat.”

The project would sit on 4,000 acres of habitat, home to 25 desert tortoises, as well as rare plants like the Mojave milkweed. The tortoises must be removed and suitable replacement habitat purchased for them, the energy commission said.

While the Sierra Club’s national organization has supported desert solar power plants, a local chapter has challenged the Ivanpah project, joining Defenders of Wildlife and other environmental groups in urging that the project be reconfigured and moved closer to the highway to lessen the impact on the tortoise.

Even if Ivanpah were never built, the industrialization of the desert will proceed apace. According to the California Energy Commission, some of the projects on the drawing board for the surrounding area include a 500-megawatt natural gas power plant and an airport on the Nevada side of the border, as well as seven other massive solar power plants to be built within miles of the BrightSource site.

The party line among greens of all hues is that we can have it all — renewable energy production and protection of wildlands. That may well be true, but there will have to be some hard choices made about just what kind — and how much — development we want in the desert.