“They’re Angolan refugees returning home,” biologist Mike Chase tells reporters. He’s not talking about people. He’s talking about elephants, moving out of his native Botswana, step by ponderous step. On their backs are riding the hopes of one of the most ambitious ecological experiments on the planet, the Kavango Zambezi Transfrontier Conservation Area, or KAZA.

The largest such project in the world, at more than 170,000 square miles, KAZA is the size of Sweden and involves five countries — Angola, Botswana, Namibia, Zambia, and Zimbabwe — boasting the biggest population of elephants on earth, a quarter of a million.

During Angola’s prolonged civil war, an estimated 100,000 elephants were slaughtered, their ivory sold to buy arms. In 2001, a year before the war ended, fewer than 40 were left in the country’s Luiana reserve. Six years

KAZA may help lift people out of poverty and protect one of the last, large-scale ecosystems on the continent.

later, after Namibia and Botswana agreed to open a strategic 22-mile gap in a maze of border and veterinary fencing (keeping wild buffalo or infected cattle from contaminating Botswana’s herds), Chase counted 8,000. Bull elephants had scouted Angola’s thinly-populated southern reserves, found conditions to their liking, and returned to northern Botswana to lead herds home to Angola. Once there, they skirted landmines, having perhaps learned through bitter experience how to sniff them out. Their message was clear: Give us a way back, and we will come.

Launched in March after a treaty signing last August, with $26 million pledged by Germany’s development bank, KAZA requires five sovereign nations to tiptoe through similarly explosive territory, setting aside old grievances and compelling national interests. If they succeed, KAZA may help lift people out of poverty and protect one of the last functional large-scale ecosystems left on the continent: the Okavango Delta, a massive wetland that waxes and wanes annually as rivers pour off the Angolan highlands, fanning out into the baking Kalahari and drawing some of the region’s most threatened wildlife — black rhino, African wild dog, and hundreds of species of birds.

In just one of KAZA’s parks, Zambia’s Kafue, tourism could grow from less than $5 million annually to almost $50 million in little more than a decade, according to a consultant’s report. That could be multiplied across the conservation area, which contains more than 40 protected areas: national parks, forest and game reserves, and community conservancies. 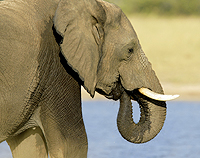 EcoPrint
An elephant drinks at a water hole in Zimbabwe’s Hwange National Park.
But the project faces daunting obstacles: insufficient funding, conflict between people and wildlife, fear of disease outbreaks among cattle, and a recently reported steep decline in wildlife numbers. Critics are also concerned that the project may end up enriching foreign tourism companies rather than local communities.

Westerners think of parks as pristine, but as one expert puts it, “Wilderness areas with no human impacts do not exist in Africa.” Only well-established national parks, such as Bostwana’s Chobe, have no human inhabitants; fewer still thrive on the traditional model of armed guards and fences. KAZA — not a park but a “transfrontier conservation area”— has a human population perhaps as high as 2.5 million. Over half its land is communally managed, used for subsistence farming or grazing. While the idea of linking parks across borders has been around since 1932, recent developments in southern Africa have created urgency around transfrontier plans, particularly bottlenecks wrought by fencing (required by the EU’s subsidized beef export market), which effectively trapped tens of thousands of elephants in northern Botswana.

“An Africa without fences” is the vision of the Peace Parks Foundation. Founded in 1997, it has enrolled every country in southern Africa in the effort, raising millions from donor countries, encouraging private investment,

Such peace parks are dismissed by one academic as another ‘grandiose scheme foisted upon Africa.’

and supporting colleges to train wildlife rangers and tourism staff. Progress has not been without pitfalls: The group was vilified for its high-handed, top-down approach as it expanded South Africa’s Kruger National Park into Mozambique. While peace parks are dismissed by one Cape Town academic as another “grandiose scheme… foisted upon Africa,” there are now 10 in the region, with four more in the planning stage, ranging north to Tanzania.

An idea kicking around international circles since the early 1990s, KAZA was self-consciously designed to be a grassroots affair. Early supporters — including Conservation International, the WWF, and the Wildlife Conservation Society — looked to Namibia’s home-grown and highly successful conservancy movement, which had presided over a resurgence in the country’s wildlife, decimated during the long struggle against occupation. At independence, in 1990, Namibians wrote conservation into their constitution, and the fledgling republic soon backed community-based conservation groups — called conservancies — to create jobs.

At the news that a single elephant hunt might be worth $10,000, “word went through communities almost overnight,” says Chris Weaver, director of WWF in Namibia. “Poaching stopped very, very quickly.” Communities eagerly registered to guard, monitor, and manage their wildlife and have reaped benefits from ecotourism, controlled hunting, and sustainable harvesting of wild plants. Popular and effective, 71 conservancies have been registered so far, creating 1,700 full time and 8,000 seasonal jobs and earning roughly $6 million in 2010, with communities investing the money in health clinics and schools. As conservancies build corridors across the country, Namibia has protected almost 40 percent of its land and earned a reputation as a spectacular place to see rhino, cheetah, desert lions, and other wildlife. 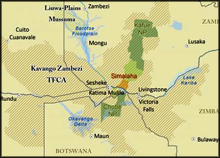 KAZA-TFCA
The Kavango Zambezi Transfrontier Conservation Area
KAZA hopes to capitalize on that model, using conservancies to reestablish wildlife corridors between existing parks and reserves. Of the five KAZA partners, only Angola, one of the poorest countries in the world, has no community-based program. Zimbabwe, grandfather of such management schemes in the 1980s, is also lagging in the final years of Robert Mugabe’s rule, blocked from receiving foreign funding. Botswana presents a mixed picture. Known for high-end ecotourism in the Okavango, it launched a network of trusts in 1993, eventually involving some 10 percent of the population, but its heavily-bureaucratized system has been less successful than Namibia’s.

More densely populated Zambia (with 14 million people, compared to Botswana and Namibia, with two million each) last year launched its first community conservancy, Simalaha, on its southern border with Namibia, right in the heart of KAZA. Funded by $2.8 million from the Swedish Postcode Lottery, Simalaha is designed to link Botswana’s Chobe and Zambia’s Kafue across a critical floodplain, providing safe passage for elephants between the two parks. Namibia and Zambia are already running joint anti-poaching patrols in the area.

Announcing plans to initiate a temporary sanctuary for wildlife, senior chief Inyambo Yeta, a traditional leader who sits on the board of the Peace Parks Foundation, spoke wistfully of the lost richness of local forests. “We want Simalaha to teem with wildlife once again,” he said.

KAZA program manager Victor Siamudaala has praised the “overwhelming” support from communities and governments. But, as Weaver emphasized, future success may be KAZA’s worst enemy, judging by the experiences of the conservancies. Escalating human-elephant conflict has become so prevalent

Recent surveys show a 90-percent decline in wildebeest and other wildlife in northern Botswana.

it has acquired its own acronym: “HEC.” In 2010, wild elephants rampaged through a southern Angolan settlement, trampling houses and farms and sending some 4,000 people over the border into Namibia, which had 11 people killed by elephants that same year. Throughout KAZA, farmers are learning to exploit every imaginable elephant deterrent, from vuvuzelas (plastic horns) to chile bombs, a mixture of dried elephant dung and peppers that is burned to create a stinging, smoke haze. Namibia has initiated payments for crop damage and funeral costs, while emphasizing that conflict cannot always be avoided.

Serious questions about KAZA’s viability remain. Mike Chase, an elephant ecologist who founded Elephants Without Borders in 2004, has documented the species’ return to Angola and radio-collared a number of pachyderms, mapping elephant corridors throughout the region, as well as barriers — fences, roads, crops, settlements — that block them. His recent aerial survey showing that elephants have stabilized at around 128,000 in northern Botswana is considered the most accurate to date.

Chase was recently employed by the Botswana government to fly additional surveys over the country’s vast northern stretches, once a wildlife stronghold, to census other large mammals. “We were completely blown out of the water,” he says of tallying steep declines in wildlife outside of Chobe National Park. Results showed a 90-percent reduction in wildebeest — from more than 23,000 in 1999 to fewer than 2,000 in 2010 — and similar declines in warthog, zebra, kudu, lechwe, tsessebe, sable, and roan. Chase attributes the losses not only to a 20-year drought but also to increased human use, fencing, and grazing of cattle, used in Botswana to calculate “lobola,” or bride price. In Chobe itself, however, many species are increasing.

An African Success: In Namibia,
The People and Wildlife Coexist

Shortly after gaining independence in 1990, Namibia turned ownership of its wildlife back to the people. By using a system of community-based management, Richard Conniff writes, this nation has avoided the fate of most others on the continent and registered a sharp increase in its key wildlife populations.
READ MORE
Chase is still optimistic about KAZA, pointing out that “ten years ago, you couldn’t get the governments to sit around a table together.” David Cumming, a transfrontier expert in Harare, Zimbabwe, is less sure. His 2011 review of “constraints” faced by peace parks is sobering, noting that KAZA’s planning documents focus heavily on development and fail to set clear objectives regarding conservation. Financing is inadequate, with even established national parks “grossly underfunded.”