When Rocky Mountain explorer Walter Wilcox hiked up to Bow Summit in Canada’s Banff National Park in 1896, he took a photo of a turquoise lake that later caught the eye of a National Geographic magazine editor. In the photo, which was eventually published, the glacier feeding the lake was just a mile upstream.

Since then, the snout of Peyto Glacier has receded more than three miles from the broad valley it carved out thousands of years ago. Remnants of ancient tree trunks the glacier bulldozed during those colder times are now being spit out in the wake of its recent retreat.

Scientists say that each year, the Peyto is losing as much as 3.5 million cubic meters of water — roughly the amount the city of Calgary, population 1.2 million, consumes in a day. About 70 percent of the Peyto’s ice mass is already gone, a retreat that will soon have a profound impact on the Mistaya and North Saskatchewan rivers, which the glacier helps nourish. 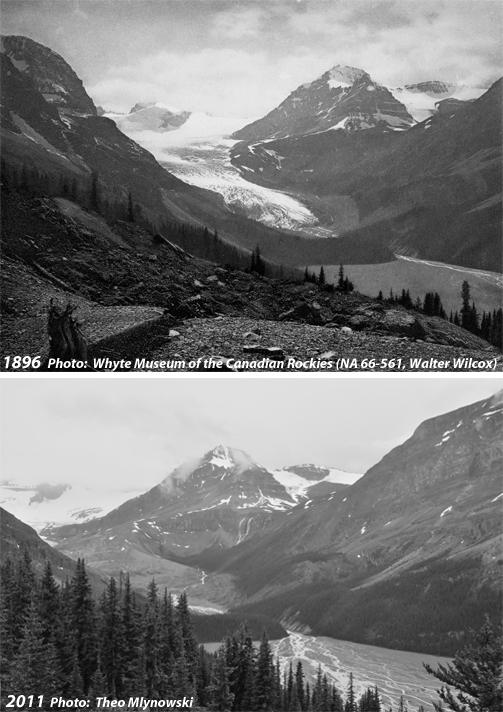 The Peyto is a small example of much bigger things happening to glaciers and snowpack in the Rocky Mountains, which supply most of the stream flow west of the Mississippi River in the United States, as well as much of the water used in the Canadian provinces of Alberta, Saskatchewan, and Manitoba. Steadily rising temperatures are not only rapidly melting glaciers, but also have caused a 20 percent decline in spring snow cover throughout the Rockies since 1980, according to a study last year by the U.S. Geological Survey (USGS).

That study said that equally as important as the decline of April snowpack is the timing of when that accumulated snow melts. As the Rocky Mountains warm, reduced winter snows are melting earlier in spring and summer, which can lead to a reduction in water supplies for drinking, irrigation, and hydropower production in key power-producing areas like the Columbia River basin in the Pacific Northwest. Runoff from snowpack alone provides 60 to 80 percent of the annual water supply for 70 million people in the American West, the USGS said.

The agency also said that diminishing snowpack and reduced runoff threaten the health of Western watersheds and increase the risk of forest fires. Warmer temperatures have been the main cause for reduced snowpack in the Rockies since the 1980s, “regardless of winter precipitation,” the USGS concluded.

“Warming is a massive threat to Rockies’ water because it reduces the ability of snowpack and glaciers to store precipitation until the summer, when ecosystems and humans want to use it,” says John Pomeroy, director of the Center for Hydrology at the University of Saskatchewan.

Pomeroy said that the melting of glaciers like the Peyto is leading temporarily to increased stream flows in the Rockies — a phenomenon that will come to an end when the glaciers lose most of their ice mass. “The rapid retreat of glaciers is partially masking the effects of a much bigger water problem we’re going to be facing in the future,” says Pomeroy. In the past, prairie users could count on late-summer runoff from glaciers to keep the rivers flowing in dry years after much of the winter and spring snow had melted, but that is unlikely to hold true in the future.

Scientists say that British Columbia’s 17,000 glaciers — both in the Rockies and along the Pacific coast — are losing 22 billion cubic meters of water annually. That’s equivalent to refilling a 60,000-seat football stadium 8,300 times.

I recently hiked with Pomeroy along Marmot Creek in Alberta, in the southwestern corner of the Canadian Rockies. Along the way, he showed me an array of gauges that measure mountain stream flow, precipitation, snowpack, groundwater, vegetation, and temperature. Scientists have been continuously recording temperatures along Marmot Creek since 1962, and since then daily low winter temperatures have increased by 5 degrees C, or 9 degrees F. Pomeroy says those increases have reduced snowpack volumes at low elevations by half and stream flow in Marmot Creek by 25 percent over the past 50 years.

What’s happening in the Rockies is part of a global phenomenon that was recently highlighted in the journal Nature. In that paper, scientists suggest there will be less winter precipitation and earlier snowmelt in a warmer world. Further, a shift in peak runoff from summer/autumn to late winter/early spring will impact downstream agricultural and municipal water use.

Pomeroy and other scientists have documented major changes in ice and snow in the Canadian Rockies. Since 1975, for example, the glacier-covered area in the South and North Saskatchewan River basins in Alberta has declined by about 37 percent and 22 percent respectively. Snowpack is diminishing as well.

“We’re seeing spring snowfall transitioning to rainfall across the Prairie Provinces,” says Pomeroy, which he estimated may reduce the water supply from the mountains by another 12 percent.

Like the Great Plains in the United States, which have been struggling with water shortages for more than a half-century, the Prairie Provinces of Canada are just beginning to suffer from the impacts of reduced snowpack. For this reason, the Alberta government was forced to close the South Saskatchewan, Oldman, and Bow River basins to further water allocations in 2006 because issuing more water licenses would have imperiled its legal obligations to provide a certain percentage of river water from the Rockies flowing to Saskatchewan and Montana.

Experts are concerned about climate change intersecting with the periodic droughts that have long plagued the Great Plains.

Groundwater is unlikely to make up for the shortfall in most places. According to a Geological Survey of Canada study, the Milk River aquifer, which supplies water for many users in Alberta and Montana, is 30 meters lower or more in some sub-basins than it was in 1937, largely because of overuse that occurred between the 1930s and the mid-1990s.

Even users in the seemingly water-rich Columbia River Basin on the west side of the Rockies are getting worried. The U.S is attempting to renegotiate the 50-year-old Columbia River Basin Treaty that was initially designed to deal with flood control, hydroelectric development, and irrigation along the 1,200-mile waterway that flows from the Canadian Rockies through Washington and Oregon.

The treaty was signed at a time when the volume of meltwater on the Canadian side of the Rockies appeared to be inexhaustible. So much water was flowing downstream from melting glaciers and dense snowpack that periodic flooding from melting glaciers and snowpack was killing people and destroying property. Recent declines in snowpack and glaciers mean that climate change will likely be a factor in negotiating a new treaty.

“There’s no question that global warming will substantially alter Columbia River hydrology,” says Rachael Paschal Osborn, staff attorney for the Center for Environmental Law and Policy in Washington State. She said that in renegotiating the treaty, Canada and the U.S. should seize the opportunity to plan for changes in water flows in the Columbia River basin and work to restore flood plains, salmon habitat, and ecosystems.

The Bonneville Power Administration, which markets electricity from 31 hydroelectric power projects in the Columbia basin; the U.S. Army Corps of Engineers; and the U.S. Bureau of Reclamation recently commissioned scientists from the University of Washington and Oregon State University to better determine what stream flows from the Rockies into the Columbia River will look like in the future. The team will examine the impact of retreating glaciers on the river system, the range of possible stream-flow changes, and the amount of water that is expected to flow in the river at hundreds of locations in future years.

‘We’re pushing the system right to the edge, and the next big drought will get us.’

“The future will not be kind to glaciers and mountain snow cover in western Canada,” says Brian Menounos, a glaciologist at the University of Northern British Columbia. “The Canadian Rockies are not going to turn into the dry mountains of Nevada anytime soon. But thinner, quicker-melting snowpacks, coupled with the loss of glaciers, will fundamentally alter these sensitive mountain ecosystems… We really need to start planning now for the future.”

Scientists and agricultural experts are particularly concerned about climate change intersecting with the periodic droughts that have long plagued the U.S. Great Plains and Canada’s Prairie Provinces. Without the moderating influence of ample late-summer and autumn snowmelt, droughts are expected to exact a heavier toll, experts say.

They point to the drought that left most of the Great Plains of North America bone dry from 1999 to 2003. At the drought’s peak, dozens of massive dust storms swept across the West. Half of Montana, all of Wyoming, nearly two-thirds of Colorado, half of Kansas, a third of Texas, and most of New Mexico suffered severe to extreme drought conditions. Thousands of prairie ponds on both sides of the border dried up, leaving waterfowl unable to find suitable wetlands in which they could nest. For the first time in a quarter century, farmers across Canada reported negative or zero net-farm incomes The Canadian GDP took a $5.8 billion hit. And all this occurred at a time when there were still sufficient amounts of meltwater coming from the Rockies.

Growing water demand in the Great Plains from agriculture, municipal use, and — increasingly — the oil and gas industry threaten to exacerbate the situation as the impacts of climate change intensify.

“Management is a bigger issue than nature,” says Pomeroy. “We’re pushing the system right to the edge, and the next big drought will get us.”

Drought, however is not going to be the only problem. Scientists say that extremes in precipitation and early snowmelt will almost certainly result in more of the catastrophic flooding that caused so much damage along the Rockies in Alberta and Colorado last year.

“In the last twelve years, the Prairie Provinces have seen the worst drought and the worst flooding since the settlement of western Canada,” says Pomeroy. “This is taxing our water management systems and skills that were developed in a more benign climate. We should expect greater extremes in the future.”