I was standing on the summit of an extinct volcano in the center of one of the most remote islands on the planet: Ascension Island in the tropical South Atlantic. Midway between Brazil and Africa, Ascension is a thousand miles from the nearest speck of land. Below me was a harsh treeless moonscape of volcanic clinker, baking in the sun. But in the cool mountain air, 800 meters up, I was surrounded by lush greenery and a light mist from a cloud settled over the mountaintop.

They call it Green Mountain. But the greenery is new. My guide, the island’s conservation development officer, Stedson Stroud, peered around us and smiled. “Nothing you see here is native,” he said. “Except for a few ferns, everything has been introduced in the past 200 years.”

On our way up the mountain, we had walked through New Zealand flax, Bermuda cedar, Chinese ginger, South African yews, guava from Brazil, European blackberries, and screw pines that grow higher here than they do at home on the islands of the Pacific. The summit, improbably covered in a dense stand of Asian bamboo, rattled like a huge wind chime in the brisk trade winds. All this had been introduced by the British Navy during the early- and mid-19th century, along with rabbits, cats, donkeys, hedgehogs, mynah birds, bees, and much else.

The success of the forest on Green Mountain is creating controversy among ecologists.

The forest that covers Green Mountain is said to be the only tropical forest in the world — apart from monoculture plantations — that is entirely man-made. It is an ecosystem, but like no other. Stroud admitted that, as a conservationist and member of the International Union for Conservation of Nature’s Species Survival Commission group for the South Atlantic, he should perhaps be rooting out all those alien species. But if he did, there would be almost nothing left. And in any case, he mused, he is presiding over something profoundly interesting — a functioning ecosystem in which a ragbag of species shipped in from all over the world thrive as if they had been together for millennia.

Though badly under-researched because of the island’s remoteness, Green Mountain is being hailed as the icon for a fundamental reassessment of many nostrums of both environmentalist and ecological science. It is also creating controversy among ecologists. What are we to make of this confected cloud forest? Is it nature or a garden? Is it a beacon for re-greening the planet or a biological abomination?

Ascension Island, which is just under twice the size of Manhattan, erupted from the Atlantic floor a million years ago. The last new lava flows were 700 years ago. The island has been in British hands for almost 200 years, as a base for controlling the Atlantic. These days, the island is peppered with aerials that track orbiting spacecraft, communicate with nuclear submarines, and listen in secretly on satellite-relayed communications. The electronic spies of Britain’s GCHQ, and possibly also the NSA, are here.

It also has one of the longest airstrips in the world. Built by the U.S. Army during World War II on land leased from Britain, it provides a secure stopping point for U.S. military flights into Africa. When I arrived on a British flight in early July, no fewer that nine large U.S. military aircraft were sitting on the tarmac, all busy protecting President Obama during his visit to Africa.

Inevitably, such human traffic brings alien species. Some lava flows and cinder cones are now covered in fast-spreading tobacco plants and Mexican thorns, whose seeds are eaten and distributed by feral donkeys and sheep. They are accidental introductions. But what sits on Green Mountain is largely deliberate. 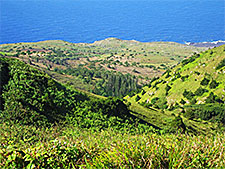 A view from Green Mountain, located in the South Atlantic 1,000 miles from Africa. ASCENSION-ISLAND.GOV

When Charles Darwin visited Ascension Island aboard the Beagle in 1836, he complained about Ascension’s “naked hideousness.” But the Royal Navy garrison, established in 1815, set about changing that. First, it put together a farm on the few patches of natural soil on the mountain.

Then British colonial botanist Sir Joseph Hooker — a future head of the famous botanical gardens at Kew in London who visited the island in 1843 — came up with the idea of growing trees to green the arid island and increase its rainfall. The idea was that the new vegetation on the mountaintop would scavenge moisture from the passing clouds. Further down the slopes, planting would encourage soil growth. Hooker’s ambition was nothing less than “terra-forming” the volcanic island, says Stroud in a recent paper with David Catling of the University of Washington, Seattle.

Today, the island has about 300 introduced species of plants to add to its 25 native species, says David Wilkinson of Liverpool John Moores University in the UK. Many are spreading. Above about 660 meters, Green Mountain is completely vegetated, with coffee bushes, vines, monkey puzzle trees, jacaranda, juniper, bananas, buddleia, Japanese cherry trees, palm trees, clerodendrum, green aloe and the pretty pink flowers of the Madagascan periwinkles. And Stroud says the vegetation captures more cloud moisture, just as Hooker had hoped, even though rainfall has declined in the lowlands around.

The invasion has been double-edged. The invaders have damaged some of the handful of endemic species that had found a foothold on the island during its million-year. Three of the endemic ferns are believed now extinct. But as we stood on the mountain, gazing south over an abandoned NASA tracking station, Stroud pointed out below us the spot where, in 2009, he rediscovered on a cliff face a single specimen of a species believed lost, Anogramma ascensionis. Now it is being propagated in the UK ready for a reintroduction.

Plants gathered from across the world “self-organized by the mechanism of ecological fitting,” says a scientist.

In fact, many of the endemics seem to get on remarkably well with the motley collection of invaders, says Stroud. The ferns that once clung to the bare mountainside now prosper on the branches of introduced trees like bamboo. Stroud showed me ferns that he believes now thrive only on the mosses that grow on such branches.

Likewise, the profusion of Ascension land crabs — the island’s largest native land animals — that now feast on the fruits of alien trees like the guava. The only researcher to have studied the land crabs in recent times, Richard Hartnoll of the University of Liverpool, says that the invasive vegetation “increases the area of shade and shelter for crabs, and also provides a large resource of food” — perhaps replacing their former scavenging on seabird colonies.

You might think that this snugness would be of huge ecological interest? Yet, until now, visiting scientists have ignored it, says Stroud. Most researchers who make the long journey — the only practical way in is aboard a British military flight — have concentrated on the island’s charismatic populations of seabirds, green turtles, and the handful of endangered ferns. 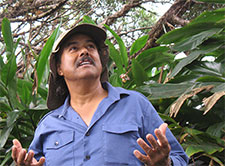 Conservation officer Stedson Stroud says that nearly all plants on Green Mountain are not native to the island. FRED PEARCE

This blindness in research extends to conservation, says Wilkinson. The British government’s environmental policy for the island is the “control and eradication of invasive species” in order to “ensure the protection and restoration of key habitats.” (A major exercise to eradicate feral cats has been implemented under this policy.) But the policy has nothing to say about the protection of — or even ecological research into — the extraordinary novel ecosystem in their midst on which the indigenous species often depend.

That is a shame. For, according to an increasing number of ecologists, the unique ecosystem on Green Mountain may hold important lessons about how ecosystems around the world function. In the growing scientific literature over the past decade about “novel” ecosystems, in which human agency or interference is a central factor in their makeup, Green Mountain is one of the most cited examples. More than that, the mountain’s ecosystem calls into question a series of widely held assumptions about how complex, biodiverse ecosystems evolve — or indeed whether they evolve at all.

According to mainstream ecological theory, this cloud forest really should not exist. Certainly it should not thrive. Complex forests ecosystems are believed to take millions of years to develop, as each species evolves to fill its own niche in the system, creating a perfected “climax” ecosystem. But Green Mountain doesn’t fit that paradigm. It just seemed to happen according to the chance introductions of British sailors.

As Stroud and Catling wrote, species on Green Mountain “have bucked the standard theory that complexity emerges only through co-evolution.” On Ascension, plants gathered from across the world “self-organized by the mechanism of ecological fitting,” says Thomas Jones of the U.S. Department of Agriculture in Logan, Utah.

This forest suggests that even highly biodiverse ecosystems may be accidental, temporary, and versatile.

The implications are important. Wilkinson is among the scientists who have proposed that the Green Mountain forest is good evidence for an alternative ecological theory — ecological fitting. A term coined by University of Pennsylvania ecologist Daniel Janzen, it holds that ecosystems are typically much more random. Stuff happens.

Not everyone agrees. Alan Gray, an ecologist at the University of Edinburgh in Scotland, suggests that some species that washed up on Ascension may have known each other before. “There would appear to be a high likelihood of importing already established coevolutionary relationships,” such as moths and other invertebrates arriving with the trees in which they have evolved to lay their eggs, he says. According to Stroud, there has been no systematic study of invertebrates to unravel this conundrum.

Nonetheless, Wilkinson argues that the accidental cloud forest suggests strongly that even highly biodiverse ecosystems may often be accidental, temporary, and versatile.

Whatever the truth, the stakes are high for ecologists. But while the ideas about ecological fitting go against the grain of mainstream thinking among environmentalists, they are not out of line with the teachings of Charles Darwin. Some see co-evolution and the creation of perfected ecosystems of native species as the ecological flowering of Darwin’s thinking on evolution. But the evolutionary biologist Stephen Jay Gould has been among those who disagree strongly.

In an essay published in 1998, he attacked the “romanticism” of ecologists who sought to protect native plants against invasive species. He said their idea that Darwinian evolution created collections of species that were perfectly evolved to work together, like cogs in a machine, was false. “The Darwinian mechanism includes no concept of general progress or of optimization,” Gould wrote. In fact, Darwin never said it did. Most of the time, species simply fitted in as best they could. “Survival of the fittest” was just that.

Whatever the theoretical implications of the forest on Green Mountain, there are practical implications for conservationists, too. Harvard University ecologist E. O. Wilson has said that the 21st century will be the century of ecological restoration. And Green Mountain suggests that restoration could be much easier than many believe. Ecologists may not have to painstakingly reassemble the complex ecosystems that have been lost. They often may be able to let nature take its course.

As Wilkinson put it: “Is it possible… to suggest, for example, that large deforested areas of Amazonia could be returned to functioning forest on a 100-year time-scale?” And maybe not just former rainforests. If a forest can form so quickly and successfully on a volcano in the middle of the Atlantic, they why not in other unlikely places?

As Catling and Stroud note, “Green Mountain might help inform strategies to green some deserts or other barren locations in the world.”