The Caribbean’s largest uninhabited island is under siege. For most of the past century, sea turtles, birds and other wildlife have been the only occupants of East Caicos island, part of a tiny British-run tax haven known as the Turks and Caicos Islands (TCI). But if the politicians of the Turks and Caicos get their way, a U.S.-inspired development boom that critics say would overrun the island and decimate its natural heritage will soon be underway.

The premier of the TCI, Rufus Ewing, is seeking support from U.S. cruise ship companies and Chinese cargo firms for a giant port complex amid the wetlands and coral reefs on the east of the island. Meanwhile, a Philadelphia-based real estate company is offering for sale a large plot of land that includes more than two miles of one of the Caribbean’s longest and least disturbed turtle beaches. 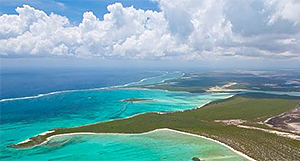 Environmentalists say the proposed port project would trigger a rush of speculative tourism development and an influx of people looking for work. The result, they contend, would be devastating to the island’s ecosystems.

“East Caicos is a jewel,” says Kathleen Wood, a former director of the territory’s environment ministry. “It has been protected until now by its isolation. But once a port is built, there will be a rush of speculators across the island and illegal development. Everybody will want a piece of the pie. Everything would be wiped out.”

“East Caicos is the most unspoilt wetland complex in the region, but it seems to be completely undervalued,” says Mike Pienkowski, director of the UK Overseas Territories Conservation Forum, an NGO that campaigns for environmental protection in this and other surviving specks of the British empire around the world.

The British government, which would have the ultimate sign-off on the port project, is refusing to get involved. It was responsible for signing up the TCI to a number of conservation treaties relevant to East Caicos, including the Ramsar Convention, an international agreement that protects wetlands. And British government scientists have recommended that an existing Ramsar site covering parts of the Caicos Islands should be extended to provide protection for the whole of East Caicos, including the proposed port site. But officials in London say conservation and planning are matters for the local elected government.

The island’s wetlands, woodlands, and savannahs are home to several rare birds.

The Turks and Caicos Islands lie southeast of the Bahamas and north of Haiti. They consist of parts of two giant sand banks that break the ocean’s surface. The Caicos bank alone covers more than 1,900 square miles. East Caicos, a one-hour boat ride from Middle Caicos through treacherous channels around coral reefs, covers 35 square miles at high tide, but twice that at low tide. 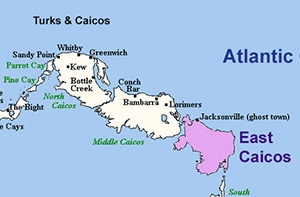 The Turks and Caicos Islands are located in the Caribbean Sea southeast of the Bahamas. WIKIMEDIA COMMONS/YALE E360

The island is not virgin wilderness. It was probably permanently occupied by the Lucayan, a branch of the Caribbean Tainos people, before the arrival of Europeans decimated local populations. But subsequently it was largely empty of people until the late 19th century, when an Irish entrepreneur, John Ney Reynolds, settled on the island and established a sisal plantation that supplied rope and twine to New York, dug phosphate-rich bat guano from limestone caves for sale to sugar plantations in Jamaica, and operated a cattle farm.

Reynolds’ endeavours died with him at the turn of the century. But their legacy lingers. While abandoned cattle were finally exterminated by American hunting parties in the 1940s, the descendents of the donkeys that once dragged the guano along a railway track to the coast still graze the island’s salty and pond-dotted savannah interior. And there are a few remains of a former settlement, Jacksonville, on the northwest shore.

The island has become a valuable refuge for the wildlife of the Caribbean. Its mangroves, wetlands, woodlands, and savannahs are home to several rare native birds, including an endemic subspecies of the Greater Antillean Bullfinch, the vulnerable West Indian whistling duck, and important populations of the Bahama mockingbird and the thick-billed vireo, as well as plenty of flamingos and brown pelicans. The island is also home to the dwarf boa constrictor, a snake found only on East Caicos and neighboring Caicos islands.

Until now, tourism development has not reached East Caicos. But Premier Ewing is intent on changing that.

The northern shore — where many would like to see resorts built — is fringed by more than 15 miles of white, sandy beaches, where green and hawksbill turtles nest. And the caves that were once mined for guano remain largely unexplored. They contain their own natural wonders, including rare crustaceans that are probably endemic but have not yet been identified or named, according to Wood. They also contain carvings and paintings made 1,400 years or so ago by the Lucayan and documented a century ago by American anthropologist Theodoor de Booy.

Much of the island remains undocumented by researchers, says Wood, an American and a long-time resident of the TCI. She resigned her post as environment director last year after a barrage of verbal attacks and criticism from supporters of the port project. Currently, Wood is trying to update the old ecological research by conducting snap surveys of the island for the Royal Society for the Protection of Birds, a British NGO. But she fears she faces a race against time before colonists take over. 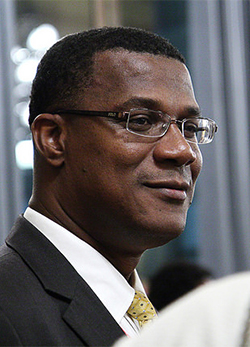 Periodic efforts to recolonize the island in the 20th century all failed. A group of Americans, recruited by an executive of Standard Oil, set up camp in 1940. But having eaten out the feral cattle, they were reduced to feeding on donkey meat before giving up. A buccaneering English journalist, John Houseman, and his wife stuck it out for a few months in 1968. Two years later, a group of Bermudans acquired 1,300 acres at Breezy Point along the northern beach, the former base of Reynolds. But they never moved in.

Tourist developments spread across other islands in the TCI in the 20th century. But until now they have not reached East Caicos. Premier Ewing and his government are intent on changing that.

Two years ago, he launched the idea of a major port on the east of the island. At a conference in Miami, he said that U.S. cruise lines, including Carnival — which has an existing port on neighboring Grand Turk island — had expressed interest in the project. Carnival told Yale Environment 360 that it had no immediate plans to add to its existing port at Grand Turk.

Last fall, TCI ministers reiterated their enthusiasm and declared that a 19 million euro grant for transport infrastructure from the European Development Fund would be spent on kick-starting the project. Finance minister Washington Misick said the government would use it “specifically for the development of a deepwater port.”

But so far Ewing’s government has not been willing to discuss how the project design would meet fundamental environmental concerns, including those raised by Wood. “The whole of TCI is low-lying land in shallow waters, with banks and coral reefs,” she says. “The port construction would need to plow through acres of vital coral reefs, dig out wetlands, and create a basin that would destroy an aquifer that birds rely on. An environmentally sensitive port development is simply not possible at this location.”

“An environmentally sensitive port development is simply not possible at this location,” one critic says.

Yale Environment 360 attempted to contact the TCI government’s permanent secretary, Wesley Clerveaux, and its former director of investment, Rebecca Astwood, who still works in the premier’s office. Astwood referred our questions to the government press officer, who did not respond. Clerveaux did not reply to emails or phone calls.

Wood believes that any kind of big government-sponsored development would turn the island into a honeypot for developers. Even before a port deal is done, efforts to leverage the plan into profitable real-estate sales are underway.

Sotheby’s recently put up for sale a 1,407-acre plot on the north shore of East Caicos, with more than two miles of “pristine beachfront” adjacent to the port development. The price tag is $42 million. It describes the plot as “the only privately owned beachfront parcel on the magnificent and uninhabited island” and “perhaps the finest freehold opportunity in the Caribbean.” It claims the port plan, which would include a deepwater yacht marina, is attracting investors from China and Russia.

The seller of the plot is the Arden Group, a real-estate company in Philadelphia that describes its investment strategy as “to identify and acquire top-tier properties in major markets and resort destinations that have demonstrated demand, but are undervalued.” Sotheby’s confirmed that the plot is the former Reynolds estate near Breezy Point acquired by unknown Bermudans for development in 1970, with some added oceanfront.

Even without blue-chip real-estate investors, the lure of jobs and the development of infrastructure for the port would likely see much of the island overrun by land speculators and the TCI’s landless — including some of the thousands of illegal migrants from Haiti who have settled on other TCI islands.

Most of East Caicos has long been part of the U.K. government’s Crown Estate. But that may be no barrier to uncontrolled development. Land and tourist developments are a contentious topic on the tax-haven island. The British government took direct control of affairs in TCI between 2009 and 2012 after a commission of inquiry found extensive corruption among the small ruling elite centred around former premier Michael Misick, particularly through the sale of Crown land for private profit.

Ninety percent of the biodiversity under the control of the British government lies in its dependent territories.

The British government’s Foreign and Commonwealth Office referred all questions about the port plan to Ewing’s government, which was elected after home rule was restored in 2012. This hands-off approach, which it commonly adopts for its dependent territories, frustrates conservationists. The Royal Society for the Protection of Birds estimates that 90 percent of the biodiversity under the control of the British government now lies in its dependent territories, former fragments of empire scattered from the Pacific Ocean to the South Atlantic and Caribbean.

British Prime Minister David Cameron told leaders of the territories, at a meeting in London at the end of 2012, that their biodiversity represented “an important opportunity to set world standards in our stewardship of the extraordinary natural environments we have inherited.” But there is a big gap between rhetoric and reality. In many of these territories, including the TCI, there is little or no legal protection for wildlife, in part because the British government does not want to interfere in local affairs, but also because it is unwilling to spend money on conservation.

British government representatives in the former colonies often recognize the unique natural heritage over which they preside. Earlier this month, Wood took the British governor of TCI, Peter Beckingham, on a visit to East Caicos. He was evidently impressed. Afterward, he declared in a blog: “I suspect few visitors to TCI, and possibly even some of our local residents, can have any idea what a jewel sits on the edge of the islands.

“We should all be grateful,” Beckingham continued,” for [those people] keeping and preserving East Caicos as the region’s last remaining, biggest, uninhabited paradise.” Sadly, his own government is not currently among them.