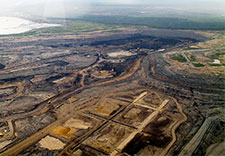 When Alberta’s oil sands industry marked its 40th anniversary in 2007, one statistic stood out among the many that measure economic success and environmental impact: Not a single acre of mined land had been certified as being “reclaimed” to government standards.

Since then, major bitumen-mining companies such as Suncor and Syncrude have spent an enormous amount of time, money, and public relations effort to convince the public that they have returned disturbed lands to a state that is “equal or better than pre-disturbance conditions.”

The companies have filled in giant mine pits, replanted trees, engineered marshes, and brought in bison to graze on boreal shrublands that have been manufactured from excavated earth and wetland vegetation. Today, however, less than one square mile of the 296 square miles of land that has been disturbed by tar sands development has been certified as being reclaimed by the province of Alberta. Standing in the way of certification are poorly defined government guidelines on wetland reclamation and the absence of clear company plans showing how reclamation can be achieved and evaluated.

Less than one square mile of land disturbed by tar sands mining has been certified as reclaimed.

The challenges of restoring a landscape uprooted by the destructive practice of oil sands mining — which involves strip mining the earth to depths of up to 250 feet — are enormous. Oil sands mining occurs primarily in complex wetland ecosystems of boreal swamps, bogs, and peatland fens that were formed over thousands of years and harbor a significant amount of biodiversity. Many experts doubt whether it’s technically or even economically possible to recreate on a large scale anything resembling the sensitive environments that existed there in the past. Even if were possible, others wonder whether climate change and rapidly expanding tar sands development in Canada — the volume of tar sands mining is expected to nearly double by 2021 — will sabotage efforts to accomplish this on a broad scale in the future.

“I call these reclamation claims by both government and industry a form of greenwashing,” says Suzanne Bayley, a wetlands ecologist at the University of Alberta who recently co-wrote a paper on massive peatland losses in the tar sands region. “What land the industry has reclaimed so far may look good in newspaper, magazine, and television ads, but it is not the wetland-rich landscape that was once dominated by forested and shrubby fens.”

Lee Foote, a University of Alberta wetlands ecologist who has worked with the tar sands industry and advised the Alberta government on wetland reclamation policies, agrees that reclamation has so far been done more for public show than to create viable ecosystems.

“The mindset is to throw big dollars at engineering designer wetlands that are green but not nearly as functional as what was there in the past,” says Foote. “The main aim is to get the social license that is needed for these companies to continue operating.”

While Suncor officials say it is too soon to determine whether their land reclamation efforts will be successful, they are optimistic that peatland fens can be engineered. Initial pilot projects look promising, the company says.

“It’s easy to label something impossible that’s never been done before, and constructing a fen falls into that category,” says Suncor spokesperson Kelli Stevens. “But we’re trying because we thought it was important to do so. We’ll see through the course of the monitoring phase how successful we are. But so far, early monitoring tells us that we are on the right track.” Typical fen plants — including sedges, moss, grasses, and shrubs — have successfully established, she notes. If the fen continues to support wetland plants and sufficient water, and eventually accumulates peat, she says, “This pilot fen will be deemed a success.”

The phrasing of restoration legislation is so vague it fails to hold industry accountable.

The issue of reclamation in the tar sands region has been a source of debate since the 1970s, when the Alberta government invested $100 million in creating the now defunct Alberta Oil Sands Technology and Research Authority to kickstart more commercial tar sands developments.

Even then, scientists involved in the research warned that the “future oil sands will probably be built without adequate knowledge about the possible effects on the air, water, and soil of the surrounding countryside, or the impact on various methods of land reclamation.”

What followed were mounting environmental liabilities such as giant effluent ponds, denuded landscapes, and diminishing plant and wildlife populations. The Canadian and Alberta governments ignored these until indigenous people living downstream of the tar sands began exerting treaty rights and launching court challenges. Faced with growing legal exposure, as well as public pressures, the government of Alberta set out wetland compensation guidelines in 2007 directing companies to re-establish “a naturally occurring wetland with a functioning natural ecosystem whose characteristics are as close as possible to conditions prior to drainage or other alteration.”

While it sounded promising at the time, the phrasing of the guidelines have proved to be so vague that almost everyone agrees they lack a legal definition and therefore fail to hold industry accountable. Instead of recreating peatland fens, industry has in most cases engineered swamps that are not nearly as biologically complex.

Before tar sands companies arrived on the scene, peatland fens comprised at least fifty percent, and possibly as much two-thirds, of the region’s boreal landscape. These fens supported a wide range of plants, including many of western Canada’s wild and rarest orchids; hundreds of species of birds; untold number of insect species; as well as a range of large mammals, including woodland caribou, moose, wolves, and grizzly bears. No one knows how biologically diverse these ecosystems were because inventories and assessments were never conducted.

Restored swamps lack the biodiversity of a peatland ecosystem and do not sequester carbon nearly as effectively.

Until a few years ago, recreating peatland fens — which also play a vital ecological role by filtering water and sequestering enormous amounts of carbon — was thought to be impossible. Peatland fen restoration would require water and soil chemistries that develop only when groundwater flows through nutrient-rich layers of sphagnum and other mosses that have decomposed over millennia.

Rather than try to recreate what was there in the past, industry hired reclamation experts to replace them with upland forests and shrubland marshes capable of tolerating the salts, metals, and acids that are generated by oil sands mining and are present in the disturbed soils and in the groundwater flowing through them.

These swamps may look good in pictures, and they are capable of supporting some ducks and other nesting waterfowl. But they lack the biodiversity of a peatland ecosystem and do not sequester carbon nearly as effectively, wetland ecologists say. This is especially important because landscape changes caused by currently approved tar sands mining operations will release 11.4 million to 47.3 million metric tons of carbon, according to a study by the University of Alberta’s Bayley and her colleagues. These changes will also reduce the former wetlands’ ability to sequester carbon by as much as 7.2 million metric tons annually.

“These losses have not been previously quantified,” says Bayley. “They should be included with the already high estimates of carbon emissions that the oil sands industry is responsible for.”

Faced with growing concerns and protests over tar sands development, the Alberta government is demanding that industry reclaim more peatland fens. But given that his has not been done before, the government must be content for now to see what can be accomplished on a pilot scale. Costs for wetland reclamation, says Foote, are high, with estimates ranging from $4 to $13 billion, or about 6 percent of the net profits generated from mining those sites.

‘You cannot recreate what took thousands of years to form,’ says one scientist.

“When you have $300 billion of infrastructure and a huge pipeline of income coming out of that area, the social benefits derived from a relatively small area of wetland are dwarfed,” says Foote. “That’s why wetlands will continue to be pushed to the side and put on the backburner. Industry will spend a lot of money trying to engineer something similar to what was there in the past, but it will fail because you can not recreate what takes thousands of years to form.”

University of Waterloo hydrologist Jonathan Price is one of a group of scientists from across Canada who recently received $6.7 million in government and industry funding to restore tar sands lands on Suncor property. The blueprint for reclamation includes trucking in stored peat, building an aquifer, diverting water, and physically separating oil tailings dumps from the fens so that the contaminants — more than 840 billion liters of toxic fluid byproducts are currently being held in open reservoirs — don’t leach into the groundwater.

Price acknowledges that it will take at least a decade or more to see concrete results and a lifetime before anyone can declare success. He also doubts that it will be economically feasible to do this on a large scale. But doing nothing, he cautions, is not the way to move forward.

“Engineering a landscape such as this requires a huge range of intellectual and academic disciplines,” says Price. “Attempting to do it makes you appreciate just how complicated and precious this environment is and how difficult it is to recreate. But the fact is resource extraction is inevitable. We’re trying to make the best out of a difficult situation.”

Ecologist Brett Purdy worked on oil sands reclamation for the Alberta government before he moved to Alberta Innovates — Energy and Environment Solutions, a research organzation funded by the provincial government. He suggests that it may be unrealistic to expect that plant and animal communities similar to those found on previously undisturbed landscapes can be established on all reclaimed landscapes.

Purdy’s view of the future is not unlike that espoused by the character played by Kevin Costner in the movie Field of Dreams: If you build it, says Purdy, they — plants, insects, and animals — will come, provided there is enough resiliency in the natural systems. It won’t be the same as it was before, he acknowledges, but it will be a viable boreal ecosystem.

Bayley maintains that the Environmental Protection Security Fund — established several years ago to ensure that resource companies reclaim oil sands land — is insufficient to deal with liabilities should a tar sands company fail to meet its obligations. Currently, the fund contains $875 million for more than 70,000 hectares of disturbed land. According to the Pembina Institute, an environmental watchdog and industry consulting service, it would cost more than $15 billion to reclaim these lands.

“Like it or not, the reclamation debt is growing and it will continue to grow as oil sands companies move to double production,” says Bayley. “If this continues without a clear wetlands reclamation policy, we will have more than 65 percent less peatland and very little of the plant and animal life that existed there in the past.”