Until just a couple weeks ago, the great global food challenge was how to feed 9 billion people in 2050. But no longer — the number of mid-century mouths just jumped. Now it’s projected to be 9.6 billion, closing in on double-digit billions. And forget about expectations that world population will stabilize this century: By 2100, according to the latest projections, the number of people on the planet will hit 10.9 billion — and will still be growing by 10 million a year.

These hundreds of millions of unanticipated future humans come from the “medium-fertility,” or best-guess, calculations of United Nations demographers, who this month released their biannual projections of future world population. And what a surprise their calculations are, dashing the hopes of optimists who had been assuming that human fertility is falling everywhere and that population growth would end “on its own” within a few decades.

What’s interesting about the new projections, however, isn’t what they say about future populations. Not even demographers, after all, know how many people will be living 50 years from now. What’s interesting is what the numbers say about today’s 7.2 billion humans. Because what the new projections say especially loudly, based in large part on the 2010 round of country censuses, is that women in many of the world’s poorest and most conflict-prone countries are having significantly more children than previously thought, largely because many governments are no longer making family planning a high priority.

Only 10 years ago, based on then-current childbearing trends, the UN Population Division was projecting that there would be no more than 8.9 billion people alive in 2050. That number just jumped by 700 million people — an increase nearly as large as the population of Europe.

Afghanistan’s current fertility rate — the average number of children each woman has over her lifetime — is now estimated at 6.3, compared to 5.1 previously. Women in South Sudan average 5.4 children, up from the earlier estimate of 3.8. For Timor-Leste (East Timor) it’s 6.5, up from 5.7. For Somalia, 7.1 compared to 6.7. For Ethiopia, 5.3 compared to 4.8. And the list of boosted fertility estimates — some reflecting real fertility increases, some just improvements on past estimates — goes on. The UN Population Division raised by a full 5 percent its assessments of fertility in 15 sub-Saharan countries in which most women give birth many times.

In a world of changing climate, shrinking farm plots, dwindling fresh water supplies and growing social stress, these larger assessments of family size in fast-growing, low-income countries can hardly be good news. What the new fertility estimates reflect is not just counting errors but a collective failure to provide women around the world with something they need that men don’t have to ask for: safe and effective ways to avoid pregnancies they don’t intend or want, along with the education and autonomy to put their childbearing decisions into effect.

About two out of five pregnancies worldwide are unintended, according to the Guttmacher Institute, a respected reproductive-health think tank. Intriguingly, the proportion is as high on average in the high-consuming developed world, despite our sophisticated health systems, as in the developing one. An estimated 222 million women in developing countries are sexually active and do not want to become pregnant, yet are not using effective contraception, health surveys show. It would take a mere $8.1 billion — a rounding error in today’s $80-trillion global economy—to supply the family planning services that could shrink this number close to zero, the Guttmacher Institute estimates. But the world spends less than half that.

Pinched funding for family planning and reproductive health reflects larger obstacles to a sustainable world population. In no country have women achieved real equality with men, and in some they are still seen essentially as male property. And in few societies is there full acceptance that sexuality is not only essential to reproduction but meaningful and valuable even when reproduction is not a personal intention. Sex education is non-existent in many countries and scarcely adequate in any. Contraception gets confused with abortion and even in the United States is associated with promiscuity — witness the controversies surrounding the contraceptive insurance mandate in Obamacare and the availability of emergency contraception to sexually active girls.

World leaders have come to see family planning as an issue that is too sensitive to bring up.

On the other side of the planet, the Catholic Church for years has blocked the government of the Philippines (fertility rate: 3.3 children per woman, second highest in eastern Asia) from providing free family planning services to all who seek them. Although President Benigno Aquino recently signed a bill to do just that, the Church has taken the matter to the country’s Supreme Court. The court put a hold on the law’s implementation prior to its review, and most of the justices are reported to be sympathetic to the bishops’ opposition to modern contraception.

More secular and affluent subsets of the global population can hardly be smug about these matters. The truth is that few of us are comfortable addressing either the need to improve family planning services and sexuality education or the growth of world population itself. Population, in particular has been off the table of public and governmental discourse for two decades. By unspoken agreement, world leaders have come to see the issue as too sensitive to bring up. The worry appears to be that it offends the anti-contraception Catholic Church, as well as some women’s rights advocates and leaders of high-fertility countries, who argue that the consumption of the wealthy is a far greater threat to humanity than continued population growth.

The new UN population projections are a blunt reminder of the consequences of our silence. No end to global population growth is in sight. Nor will one be until we resolve to act on women’s autonomy, the dignity of sex without reproduction, and the importance of a non-growing population to environmental sustainability. 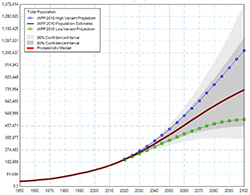 Nigeria’s population is projected to quintuple from 184 million today to 914 million in 2100. UNITED NATIONS POPULATION DIVISION

Advocates of pro-active population policies — based on human rights and individual intention rather than on coercive population control — have been making a key point for decades: Without an eventual end to population growth, our physical world of finite natural resources inevitably will witness increases in death rates from disease, starvation, or violent conflict. The demographers of the United Nations seem not to be on speaking terms with their scientific colleagues who study climate change and the planet’s ecosystems and natural resources. At the least, the former are not grasping what the latter are projecting for humanity based on their own expertise.

To be fair, the demographers themselves acknowledge that projections are really at best educated guesses based on past and present human data. John Wilmoth, the UN Population Division’s director, told the Associated Press that “there is a great deal of uncertainty about population trends.” The impact of potentially devastating epidemics — already the world sees more than five new infectious diseases each year, according to a study by parasitologist Peter Daszak and colleagues — is just one such unknown. Nonetheless, pundits, press, and public assume that demographic experts are confidently and competently predicting the future of human population. And this future presupposes that no level of human presence on the planet will ever undermine its capacity to support human life.

So the projections present us with the optimistic presumption that in 2100 human life expectancy worldwide will average 82 years, up from 70 today — despite growing resource scarcity and temperature increases likely to have blasted through the 2-degrees-Celsius ceiling that climate scientists and governments have agreed is dangerous to exceed. Nigeria’s population is projected to quintuple from 184 million today to 914 million in 2100. The country’s development is already hobbled by violent conflict, government corruption, untreated waste, and rampant oil spills — not to mention an inequitable economic reliance on oil that is unlikely to keep gushing at current rates for 87 more years. It’s difficult to imagine Nigeria heading toward 1 billion human beings as the country’s less-than-abundant natural assets of renewable fresh water and arable land shrink by roughly 80 percent on a per-capita basis.

What If Experts Are Wrong On World Population Growth?

A central tenet of demography is that global population will peak at 9 to 10 billion this century and then gradually decline as poorer countries develop. But, as Carl Haub wrote in 2011, that assumption may be overly optimistic — and if it is, population will continue to rise, placing enormous strains on the environment.READ MORE

Egypt and Ethiopia are rattling sabers even today over their common dependence on the waters of the Nile as Ethiopia harnesses its flow for hydropower. The countries will see their combined population more than double, from 176 million to 379 million. Jordan is already challenged to share its scarce water supply with an influx of Syrian refugees who have boosted its population of 7.3 million by 500,000. The native Jordanian population alone is projected to grow by that amount in just three years — and by 78 percent by 2100.

People in all these countries are innovative and resourceful. No doubt technological advances we can’t possibly imagine today will contribute to health and long life. Maybe we’ll soon make real progress in addressing climate change and water scarcity. But all those who believe that such large populations are likely to be living in these countries — with 82-year life expectancies no less — at the end of this environmentally challenged century, please raise your hands. The rest of us need to start taking the rights and potential of women, the importance of sex for its own sake, and the impact of human numbers on the environment a lot more seriously than we do today.