It’s one of the biggest, fastest, and most beautiful fish in the sea. It has captured the imaginations of people from Homer to Salvador Dali. But end-times loom for the giant bluefin tuna, whose chances of survival were greatly diminished in late November by the international commission charged with its care.

Once again, that body — the International Commission for the Conservation of Atlantic Tunas — refused to take strong action to prevent the runaway overfishing of the giant bluefin tuna in its sole remaining, yet rapidly disappearing, stronghold: the Mediterranean.

One of the sea’s few elite warm-blooded fish, bluefin tuna can reach three-quarters of a ton, swim at highway speeds, migrate across oceans, and visit coasts of distant continents. They’re also the world’s most valued fish (once they’re dead), and therein they hang by the tail.

Too valuable everywhere to be allowed to live anywhere, the giant bluefin tuna may be worth more money to a person who kills one than any other animal on the planet, elephants and rhinos included. A few years ago, a single 444-pound bluefin tuna sold wholesale in Japan for $173,600. One fish.

A 43-nation commission has public-trust management authority and a mandate to conserve. But the International Commission for the Conservation of Atlantic Tunas has for its 40-year history merely acted as the fishing industry’s official, tax-funded conglomerate.

Bluefin tuna can grow to more than 1,000 pounds and migrate the full length of the Atlantic. GREENPEACE

Think of it as the International Conspiracy to Catch All the Tuna, and its record starts making sense. The commission’s resume on bluefin tuna graphs as plunging populations, down more than half in the Mediterranean and now free-falling, and down more than 90 percent in the west Atlantic.

The increasing rarity of bluefin—and escalating worldwide sushi madness—has only intensified fishing efforts. And as the fish diminish, demand further drives up the price of bluefin meat. As extinction nears, the fishing keeps escalating.

Fishing has already demolished bluefin populations. The last few decades have seen gold-rush bluefin fisheries disappear off Brazil, in the North Sea, and the southwest Pacific. Wherever they still swim, they are aggressively hunted.

Atlantic bluefin breed in only two places: the Mediterranean and Gulf of Mexico. From these two spawning areas they migrate throughout the whole North Atlantic, mingling in many fishing areas. But fish from these two populations do not interbreed; they are separate breeding stocks that, when not breeding, mix in many areas where they’re fished.

Either population could thrive or go extinct. Right now, both are in trouble. European and Mediterranean fishing is out of control. But the fish native to the North American side of the ocean are actually faring far worse. Catches reflect these different trajectories. While Europeans are killing almost twice their legal limit, U.S. fishermen are finding only a fraction of the fish they caught just ten years ago. So few fish remain in the west Atlantic’s bluefin population that in the last few years U.S. commercial bluefin fishers have been able to catch less than 15 percent of what they were allowed. In a word: collapse.

So, what did fishery managers just do? As they have for 20 years, they ignored their own scientists. For the east Atlantic and Mediterranean, the scientists had recommended drastic and immediate catch reduction from nearly 30,000 tons annually to 15,000 tons. Yet despite official warnings and calls for a catch ban, the sleepwalking ICCAT commissioners on Nov. 25 set the catch limit nearly half again as high: 22,000 tons. Having by incompetence, greed, and reckless industry interference caused the depletion of this magnificent and commercially important fish, the commissioners agreed to ensure further decline.

Excessive catch limits will ultimately prove self-defeating, yet short-term thinking prevails. For the Mediterranean and eastern Atlantic, ICCAT’s managers have allowed fishermen to catch half again what their own scientists recommended. And fishermen have ended up taking double what they’re allowed (the actual catch in 2008 was 61,000 metric tons), making every second bite at the sushi bar illegal.

What else is going on here? “The EU has bankrolled the decimation of bluefin stocks by subsidizing the new large fishing vessels that are responsible for overfishing, to the detriment of certain traditional fishing fleets,” said European Parliament member Raül Romeva, who attended the tuna commission meeting. “When the stocks are gone, the same ship owners who lobbied to overexploit bluefin tuna will come cap in hand for more EU money.”

The U.S. has justifiable indignation over catches on the other side of the ocean. Bluefin tuna originating in the Mediterranean migrate to American fishing grounds, and rampant overfishing on that side of the Atlantic hurts fishing in U.S. waters. So the U.S. has an immediate interest in trying to inject some sanity to the fishing there.

But the U.S. should also have an interest in fixing its own problems at home, too. And it doesn’t. The west Atlantic is fished by the U.S., Canada, Mexico, 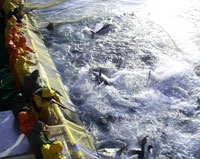 As commercial fishing continues, bluefin populations continue to plummet on both sides of the Atlantic.

and Japan. These countries agreed last month to cut the catch limit for the western Atlantic from the current 2,100 metric tons to 1,800 metric tons by the year 2010. Noble, right? No, not at all. Here’s the catch, literally: 1,600 tons. That’s the amount caught by the countries fishing the west Atlantic in 2007, a number that is actually less than what the “limit” will be reduced to two years from now. In other words, the limit is higher than the catch, so it’s not a limit at all. Effectively, it’s catch-as-catch-can.

And yet in the U.S. National Oceanic and Atmospheric Administration’s press release on the tuna commission meeting’s outcome, America praised itself while expressing “extreme disappointment” at Europe. Finger-pointing by the U.S. obscures the fact that its own Gulf-spawning bluefin tuna population is in worse shape than the one spawned in the Mediterranean.

Gulf-spawned fish migrate up the east coast and into Canadian waters, spend about 12 years growing up, and then — if they’re still alive — return to the Gulf as giants to spawn. The NOAA press release highlights Europe’s failings (the dodge-tactic pioneered by U.S. fishermen), and most environmental groups join the chorus. But the fact is: While our last few native giants trickle in to the Gulf of Mexico to breed, our own fisheries agency allows U.S. boats to catch spawning fish. They’re allowed to keep one bluefin per trip while ostensibly fishing for other kinds of fish. But high prices mean the big tuna get targeted. And because they fish with hundreds of hooks and can keep only one bluefin, they kill — and dump — numerous spawners. If one were designing an extermination campaign, it would work just like this.

The World Conservation Union lists west Atlantic bluefin tuna as “critically endangered.” More dithering could doom the population—and for what? This kind of negligent management drives U.S. boats out of business anyway because ultimately the fish population is lost, and everyone loses. The United States could immediately fix this problem. It has full control of the west Atlantic population’s Gulf of Mexico spawning ground. Yet the killing continues, while U.S. fishery managers stonewall all criticism on the matter.

The United States can — and must now — suspend tuna fishing on the bluefin tuna’s U.S. spawning grounds during breeding season. Then we need an Atlantic-wide bluefin tuna fishing moratorium. After years of inaction and continuous decline, letting them spawn free of constant harassment and giving the populations a five-year cease-fire seems the only hope for saving the giant fish.

Conservationists must work to get the west Atlantic bluefin population listed under the Endangered Species Act. Meanwhile, the U.S. should seek legal action against European fishing countries under the Pelly Amendment for undermining the efficacy of officially agreed-to fishing limits. And management of international trade in bluefin tuna should be turned over to the Convention on International Trade in Endangered Species, which enacted the ban on ivory that saved Africa’s elephants. After all, it’s the export to Japan that drives this whole bloody mess.