The San Francisco Bay was once one of the richest estuaries in North America. Almost completely enclosed and protected from the open ocean, and with more than 200 freshwater creeks feeding into it, it was a fertile refuge for young salmon, halibut, sturgeon, anchovy, and smelt. It was lined with some 200,000 acres of tidal marsh, and the connected Sacramento Delta doubled that, creating a region so rich and productive it was known as the Everglades of the West. 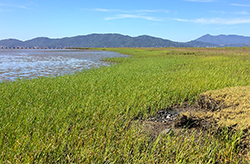 This tidal marsh in San Francisco Bay is one of the key areas on which local environmentalists are focusing. SAN FRANCISCO ESTUARY INSTITUTE

By the middle of the 20th century, infill for development and diking had shrunk the bay’s tidal marshes to just 40,000 acres. In 1999, the San Francisco Estuary Institute set a goal of bringing the acreage of tidal lands in the bay back to 100,000. Several thousand acres have been rebuilt since then, and the replacement of nearly 30,000 more is in the planning stage.

Then came the specter of climate change.

Environmentalists realized that hard won gains could be undone as the sea level rises and claims the marshes — new and old — which are home to the clapper rail, a shorebird, and the salt marsh harvest mouse, endangered species both. “So the question isn’t just how do you restore tidal marshes,” says Robin Grossinger, senior scientist with the San Francisco Estuary Institute. “But how do you increase resilience as you restore them at the same time?”

Conservation is a moving target and growing more that way, in ways both predictable and not.

Resilience calculations are going on all over the conservation landscape these days. Around the globe, species are on the move, rising up in elevation at a rate of 11 meters and poleward at 17 kilometers per decade — about 36 feet and 10 miles respectively — to escape the heat and stay within their niches. That’s more than two or three times as fast as previous accounts. Conservation, then, is a moving target and growing more that way, in ways both predictable and not.

Resilience, in a nutshell, means preserving options — no one can predict the climate future with any certainty and how the biodiversity deck will be reshuffled. So that means protecting landscapes that maintain as wide a variety of characteristics to preserve as many species as possible, in order to maintain both ecological function as the world changes and the ability to recover from disturbance.

The initiative in the San Francisco estuary is one of the leading efforts to protect and restore a natural shoreline in a largely urban area. A lot is riding on the efforts there, including the fate the clapper rail, renamed Ridgway’s rail last year. Some 1,100 of these chicken-sized wading birds — one of the largest populations left — scour the tidal marshes and mud flats for snails and worms near the tall grass that they use for camouflage and nesting. 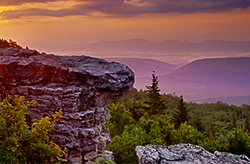 The estuary institute’s strategy is to capitalize on the natural resilience of the marshes by allowing them to move inland as the ocean rises, as the marshes have always done, into gently sloped areas, which the institute is protecting through land purchases. But there are a number of places where highways and other things have been built right up to the edge of the marsh.

To solve that problem, researchers are looking at ways to fortify the tidelands by nourishing them with sediment that has built up behind dams in local watersheds, and allow the ecosystem to reclaim itself. “These systems are extremely brittle, inflexible, and vulnerable,” says Grossinger. “But we have the ability to increase their resilience and give them the ability to adapt.”

In 2010 Mark Anderson and Charles E. Ferree of The Nature Conservancy published a paper called “Conserving the Stage: Climate Change and the Geophysical Underpinnings of Species Diversity” that looked at the northeast United States and ways to predict where the greatest biodiversity occurs. At the time, forecasting of species migration looked primarily at what climatic conditions a species lives in now and where those same climatic conditions might exist in the future, which is presumably where those plants and animals would move to.

But biological models are frustratingly untrustworthy because there are so many variables. So Anderson, using earlier research, compared the impact of climate on plants and animals with abiotic, or non-living factors, such things as geology, elevation, and landforms — and got a surprise. “Abiotic variables were fantastic predictors of how much diversity was in a state,” said Anderson. “And climate variables were not good predictors.” (Coincidentally another biologist, Paul Beier, published a very similar paper called “Conserving the Arena” at the same time.) One of the best predictors for richness of biodiversity, for example, is limestone because many species thrive in its low acid, calcium- rich soil. A good deal of biodiversity, in fact, occurs only in limestone regions.

This new approach has proven to be a powerful tool for forecasting where biodiversity might end up.

The idea of “conserving the stage” has become a big part of conservation thinking since 2010. “It’s a key aspect,” said Grossinger. “The physical drivers, such as the sediment, are what shapes habitat and gives it the dynamic ability to adapt over time. And those are often really what’s missing. You can focus all you want on the clapper rail, and the ecology. But if you don’t have the sediment, the resilience is not going to be there.”

The abiotic approach has proven to be a powerful new addition to the toolbox for forecasting where biodiversity might end up. For a long time, efforts to protect biodiversity have focused on predictions of where species might move as temperatures warm. As huckleberries migrate north or upslope to stay in their climate comfort zone, for example, the berry-eating grizzly bear will follow. Problem is no one knows what the future will bring for the berries. How warm will it get? What else will change? More rain? Less? Disease? How will natural communities reorganize? Which new species will move in and which will move out?

The grizzly bears, huckleberries, and other members of the ecological community are the actors on the stage, while the soils, micro-climates and topography where the berries will grow well are the stage on which the drama is set. Rather than focusing on these actors and where they might move, many land conservation organizations are scouring the continent for the best, most diverse stages to give the drama of life its best chance. Anderson’s research over the last decade has greatly changed how many scientists and organizations look at conservation and has led to an overhaul in the way climate change mitigation is forecast.

A team of 60 scientists working for The Nature Conservancy just finished an eight-year assessment of the East Coast using abiotic criteria and identified 61 different representative “stages,” or settings, where a broad range of biodiversity has its best chance to survive. Those areas with the highest scores are “resilient,” while those with the lowest scores — generally flat and one-dimensional landscapes — are considered vulnerable. The Nature Conservancy is seeking to buy and protect the most resilient places, and the program received a boost from the Doris Duke Charitable Trust, which contributed $37 million to land purchase efforts. They’ve made the scores of these landscapes available to other groups as well.

‘It’s a reworking of Noah’s Ark. Instead of two of every animal, we take one of each different setting.’

“It’s a reworking of Noah’s Ark,” said Peter Howell, executive vice president of the Open Space Institute. “Instead of two of every animal, we take one of each different setting. When everything goes down, these are the places that will go last. They’ll save life the longest and in the most thorough way.”

Looking through the abiotic prism, for example, The Nature Conservancy protected a 1,126-acre ranch in the Smoke Hole Canyon, a remote 20-mile long valley along the Potomac River in West Virginia. The resilient features are numerous: It’s an anomalous microclimate for the East Coast, as it sits in a rain shadow and gets just 30 or so inches of rain a year and so is a dry prairie. It has a diversity of land forms, ridges, steep slopes, micro-climates, and cliffs. And while much of the limestone soil in West Virginia was cleared by farmers to plant crops, the Smoke Hole remained wooded and is still blanketed with limestone and the plants that thrive in the nutrient-rich soil. That’s why there are 120 rare plants, animals, and ecological communities.

But the Smoke Hole is not immune to climate change. A devastating outbreak of woolly adelgids, which was driven by warmer temperatures and killed hemlocks, found its way to the forest there.

The mercurial nature of how life will adapt to climate change is always going to be part crapshoot.

The Nature Conservancy also rated its existing refuges for resiliency and found that nearly all of them scored well or average. “Only four percent scored terrible,” said Anderson.

While it’s been widely adopted, some say the “conserving the stage” approach takes the focus off of species that need help now. And it’s a coarse filter that needs to be ground-truthed — land that should be resilient because of its geology, for example, said the Open Space Institute’s Howell, may not be because of invasive species.

That’s why the abiotic filter isn’t the only tool. The Nature Conservancy is still doing work the old-fashioned biotic way. Brad McRae, a landscape ecologist for the conservancy in Fort Collins, Colorado has created a software called Circuitscape that predicts, especially in highly fragmented places, where corridors for climate change refugees will be needed and where they can be found so species can migrate to more habitable ground. The software looks at vegetation, climate gradient, how much development there is, and topographic factors such as ridgelines and valley; it even factors in which are the lowest-cost corridors. “We need a well-connected portfolio to help these species find a new home,” McRae said. “Many species won’t be able to disperse fast enough, so we’ll have to physically move them.”

ALSO FROM YALE e360
Rebuilding the Natural World:
A Shift in Ecological Restoration

From forests in Queens to wetlands in China, planners and scientists are promoting a new approach that incorporates experiments into restoration projects to determine what works to the long-term benefit of nature and what does not.
READ MORE

The U.S. Fish and Wildlife Service, in charge of the 1,400 or so endangered species, primarily manages the biotic way, though it has moved toward a big-picture look at landscapes. In 2012, U.S. Interior Secretary Ken Salazar created Landscape Conservation Cooperatives. There are 22 of these self-directed co-ops now around the U.S., and they are charged with coordinating agencies, tribal governments, and private landowners in creating a landscape-level look at wildlife, invasive species, and wildfire issues beyond their own jurisdictions to plan for a changing climate.

No matter how good the forecasting, though, the mercurial nature of how life will adapt to climate change is always going to be part crapshoot. “It doesn’t solve the problem of predictability,” says Anderson, co-author of the “Conserving the Stage” paper. “It identifies places on the ground that should continue to support diversity and function. But it doesn’t tell you exactly what the diversity and function will look like.”