Brazil is justly proud of how much it has reduced deforestation in the Amazon, with rates of forest loss down 70 percent since 2004. Indeed, delegates to last year’s world biodiversity conference in Nagoya, Japan, and climate conference in Cancun, Mexico, could hardly miss the Brazilian government’s boasting about its conservation achievements.

But how has this been accomplished? The answer, at least in part, is by invading a new ecological frontier of equal importance — but with much less public visibility. Today, Brazil’s bush clearers from agribusiness are moving across the cerrado, the most biologically rich savanna in the world, which occupies a huge expanse of the high plains of central Brazil on the Atlantic side of the Amazon basin. 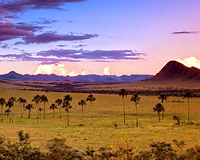 Photo by Marcio Cabral
Brazil’s cerrado is the world’s most biologically rich savanna.

In recent years, the rate of ecological destruction in the cerrado has been twice that in the Amazon. And while the majority of the Amazon rainforest survives, more than 60 percent of the cerrado’s former 200 million hectares has disappeared under the plow, mostly within the last two decades.

The cerrado has its own rich array of unusual mammals, including armadillos, anteaters, tapirs, and maned wolves, as well as thousands of endemic vascular plants adapted to drought and fire. But while the cerrado shares a place with the Amazon on Conservation International’s list of the world’s top 25 biodiversity hotspots, so far the outrage over its devastation has remained minimal.

This month the Brazilian environment ministry claimed that the rate of ecological loss in the cerrado declined between 2008 and 2009. But when I visited the region last month, nobody agreed with that assessment, and even local environment regulators saw no end to the land-clearing in sight.

The soils of the cerrado — a complex mosaic of grass and woodland — were once regarded as too acidic to grow crops. But since Brazil’s agronomists began applying industrial quantities of lime in the 1980s, these soils have been transformed. The cerrado now produces 70 percent of Brazil’s farm output.

As more roads and railways penetrate the once empty interior north of the country’s shiny modernist 1960s capital, Brasilia, the land rush is intensifying and land prices are soaring. While most of the corn grown in the cerrado is consumed in Brazil, and much of the sugar cane goes to fill the tanks of the country’s ethanol-fueled vehicles, the soya, cotton, coffee, and other crops largely go for export.

The world’s largest soya grower, Blairo Maggi, was also until recently the governor of the cerrado state of Mato Grosso. Thanks to industrial-scale farmers like him, Brazil is today the world’s largest exporter of soya, beef, chicken, sugar, ethanol, tobacco, and orange juice. The success has been so complete that the World Bank and others now see the industrializing of the cerrado as a model for transforming Africa’s savanna grasslands.

In recent months, the Brazilian parliament has debated whether to drop the forest code altogether.

I spent several days visiting giant industrial farms, many funded by U.S. and UK capital, in the frontline of western Bahia in northeast Brazil. Some 40 kilometers down a track off the main road to Brasilia, I found Agrifirma, the 42,000-hectare agricultural empire of Jacob (Lord) Rothschild, scion of one of Europe’s richest families, which grows seemingly endless fields of corn, soya, cotton, and coffee.

At lunch I met a dapper British financier and his wife, who had flown in to the Agrifirma airstrip that morning to survey their investment, and a European lottery entrepreneur spending his winnings from other peoples’ bets on another farm down the road. Close by was George Soros’s Adecoagro enterprise.

All this, says local biology professor Fernando Lutz, is a tragedy. The world has shown its enthusiasm for saving the Amazon, he says, but it has ignored the fate of the cerrado for too long. The cerrado has more than 4,000 endemic species of plants. It contains a third of all Brazilian biodiversity — more, for some groups of species, than the Amazon.

We were sitting in a bare lecture room in the newly established campus of the University of Bahia in Barreiras, the epicenter of the carnage. A couple of miles away, trucks from all over the region were lining up down the road outside Cargill’s soya-collecting silos.
Lutz told me he was planning an expedition to explore the biodiversity of the nearby district of Formosa do Rio Preto. But he may not find much left. When I later met Flavio Marques, environmental advisor to the Bahia state prosecutor in Barreiras, he told me that the fastest loss of cerrado today is in Formosa do Rio Preto. It lost more than 2,000 square kilometers to agriculture between 2002 and 2008.

The cerrado has been a black hole for conservation, said Marques. Only 2 percent of the ecosystem is protected. Brazilian agriculturalists and ministers still talk as if it had no conservation value at all. The leading global financial analyst Nomura Asset Management was recently touting the investment potential of the cerrado, reporting that it still contains “an estimated 90 million hectares of land capable of being cultivated — all without any environmental consequences.”

While Brazil’s national forest code requires developers in the Amazon to leave 80 percent of the forest intact as “legal reserves,” the requirement in the cerrado is a mere 20 percent. 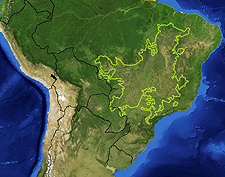 NASA/World Wide Fund for Nature
More than 60 percent of the cerrado’s former 200 million hectares has been cleared for agriculture.

And even that is largely ignored. “The private landowners have traditionally done whatever they want here,” said Marques. Three years ago, in an effort to enforce the code, he sent out a letter asking holders of more than 5,000 hectares to document their legal reserves. So far, he told me, only 10 percent have even replied.

Many are holding out because, in recent months, the Brazilian parliament has been debating whether to drop the forest code altogether. “If that happens,” says Lutz, “the consequences for the cerrado will be very bad.”

Two hours down the road from Barreiras is Luis Eduardo Magalhaes, an agricultural boomtown built around Brazil’s largest soya processing plant, which is owned by commodities giant Bunge. The town has grown from nothing to a population of 60,000 in a decade. Its recently appointed environment secretary, lawyer Fernanda Aguiar, told me: “When this place got started, they just wanted people to come, and get rich quick. Things were done without any respect for the law. People have no idea here about taking care of the cerrado.”

Respect for the law is slowly improving. Marques and Aguiar are testimony to that. The buccaneering land-grabbers of the 1970s, some of whom confiscated land and commandeered local Indians on work camps in near-slave conditions, are now mostly selling out to corporate agribusiness.

Brazil’s largest agricultural enterprise, SLC Agricola, has 11 farms in the cerrado covering 230,000 hectares, each built according to a standard design, with the same cotton-soya-corn crop rotation, the same health and safety signs, and the same floodlit football fields.

Laws remain weak, and commercial pressures to clear the cerrado continue to grow.

And the surviving farmers from the early days have gone large-scale and cleaned up their acts. As a red crop-spraying plane buzzed around his Sao Sebastio Farm, Anildo Kurek, a Brazilian of Dutch extraction, told me how he began here 20 years ago with a thousand hectares, bought with bags of soya from the first harvest. He now runs 23,000 hectares.

But the laws remain weak, and the commercial pressures to clear the cerrado continue to grow. Poor roads are the main impediment to further expansion of the region’s already prodigious agricultural output. But soon a new 1,500-kilometer railroad to the coast will be built, reaching Barreiras by the end of next year.

Can anything hold back the tide and protect what remains of the cerrado? I traveled through western Bahia with the Brazil staff of Conservation International (CI). They have a strategy for engaging with the farmers, creating a coalition of those willing to comply with existing conservation laws and to establish conservation corridors across the cerrado. CI’s corporate partner and initial link to the farmers is one of the biggest beneficiaries of the agribusiness bonanza, Monsanto.

Is the strategy working? I certainly met farmers who now talk the talk — but only, they made clear, if conservation and profit can go together. And some of the effects of Conservation International’s interventions have been perverse.

When I asked Kurek how his the newfound respect for environmental the law was going, he told me an unexpected story. CI’s help with the minutiae of conservation bureaucracy meant he now had an environment licence that allowed him to clear another 4,000 hectares of bush on his land. “We were waiting for the environmental licence before going ahead with the clearance, and CI helped us get it,” he said.

However, Kurek was keen to underline how wildlife could thrive on his farm. “We see maned wolves here sometimes,” he told me as we drove around his domain. “And rhea.” Right on cue, one of the large flightless birds shot out of a soya field and ran down the track ahead of our SUV. We chased it for a mile before the exhausted bird found an exit back into the field. Nature is surviving here, but only just.

And for how much longer? At Barreiras airport, as I checked in for the flight home, a delegation of more than 20 Chinese were arriving in a private plane. Local journalists besieged them as they explained that they were from the Chongqing Grain Group and had $2.4 billion to spend setting up a plant in the city to process 1.5 billion tons of soya beans a year. The plant will displace Bunge’s LEM operation as Brazil’s largest soya processing plant, and could handle half the state’s current soy harvest. Most of the output is destined to feed cattle to meet China’s soaring demand for meat.

The Portuguese word cerrado literally translates as “closed” or “inaccessible.” But now that the cerrado is open and accessible, it may be doomed.