As a child, Matt Aman grew up in the lush tropical lowland rain forest of Sumatra. Tigers padded through the underbrush, rarely seen and silent as shadows. “It made my skin prickle,” the indigenous leader recalled recently as he sat on the floor of a stick hut surrounded by fellow villagers.

“When I was young, it was easy to find the mouse deer, monitor lizard, and wild pigs,” Aman said.

The birds were majestic, too, he said, as he nodded and lit a cigarette. They filled the forest with a chorus of coos and trills that woke the Kubu village every morning. “We never hear those birds anymore,” Aman said. 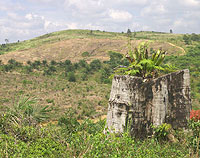 A lone stump is all that remains of this area of rain forest in Sumatra that was cleared and planted for palm oil. TOM KNUDSON

It is easy to see why. The storybook forest of his youth, the great green riot of reeds and vines, the cathedral-like thickets of fruit and hardwood trees — all of it is gone. In its place, for mile after monotonous mile, is a rolling carpet of palm trees, not the kind that sway in the wind at Waikiki, but a shorter, pudgier variety — the oil palm — that like corn and soybeans is rapidly becoming one of the world’s major sources of biofuel.

Not long ago, biofuels were billed as a green dream come true, a way to burn less fossil fuel and shrink our carbon footprint. But today, mounting evidence indicates that producing biofuels — particularly those derived from food crops such as corn and oil palm — may be doing considerably more harm to the planet than good, actually increasing greenhouse gas emissions and driving up food prices worldwide.

Some of the most devastating costs of the biofuel revolution are on display in Indonesia, where massive clearing of tropical forests for oil palm plantations has caused staggering environmental damage and tremendous loss of biodiversity. Only the Amazon and Africa’s Congo basin harbor more tropical forests than Indonesia, but the reality today is that all three regions are seeing their rain forests disappear at an alarming rate. And in the Amazon and Indonesia, growing world demand for food and biofuel is now driving much of the damage.

A flurry of scientific field work and environmental reports have linked the spread of oil palm plantations in Indonesia to the decimation of rain forests, increased conflict between logging and oil palm interests and rural and indigenous people, and massive CO2 emissions through logging, burning, and the draining of carbon-rich peat lands. And most of the trouble, as I learned on a recent visit, is playing out in the Indonesian lowland rain forests on Sumatra and Borneo, an ecosystem long regarded as a global hotspot for rare and endemic species — but perhaps not for much longer.

Over the past three years, researchers with the Zoological Society of London have searched exhaustively for tigers, clouded leopards, and other rare mammals on oil palm plantations in Sumatra. They have turned up next to nothing. “Most endangered species were never detected,” they wrote in a report last year. Initially, they found hope along the edges of plantations where, against all odds, some tigers — which have roamed the rain forest for millennia — managed to survive. But even as their studies were underway, much of that land was also cleared, often illegally by settlers.

“The tiger is going to go extinct if we don’t do something,” a wildlife biologist on Sumatra said.

“If developed responsibly, oil palm should be able to provide economic growth and development without turning some of the earth’s most important tropical ecosystems into ecological deserts,” the researchers noted in the report. But they added: “This is a big `if.’ Achieving responsible development is a major challenge.”

Roughly the size of California, Sumatra is the sixth largest island in the world. But it is home to fewer than 400 Sumatran tigers, down from around 1,000 in the 1980s. Historical population figures are sketchy. But the big cat is believed to have lost 80 percent of its natural habitat over the past century, reducing the tigers to scattered groups in increasingly beleaguered forest oases.

“The tiger is going to go extinct if we don’t do something,” a wildlife biologist named Sunarto told me in Pekanbaru, the steamy capital of Sumatra’s Riau province, a center of oil palm planting.

For his part, Sunarto is working to persuade oil palm managers to leave strategic corridors of forest around plantations untouched so the endangered big cats do not become genetically isolated. But it’s a struggle.

Not long ago, he journeyed to a research site only to find the area cleared and burned to make way for an oil palm plantation. “The trees are gone,” said Sunarto, who is working on a Ph.D. through Virginia Polytechnic Institute. “The animals are gone. There are many places like that.”

According to Indonesia’s own figures, 9.4 million acres of forest have been planted with oil palm since 1996, an area larger than New Hampshire and Connecticut combined. That works out to 2,000 acres a day, or about one football field a minute. Indonesia is the Kuwait of palm oil. Only Malaysia, which has less at stake biologically, produces more.

“This isn’t mowing your lawn or putting up a factory on the outskirts of town,” said Stephen Brend, a zoologist and field conservationist with the London-based Orangutan Foundation. “It’s changing everything as far as the eye can see.”

Like tigers, orangutans — which are found only in Sumatra and Borneo — are also being nudged into increasingly isolated population units by rain forest destruction. Their numbers are dropping, too. But because there are more of them — between 45,000 and 69,000 in Borneo and 7,300 in Sumatra — extinction is not an imminent threat.

“They are still going to be in the wild, but in fragmented populations that can never meet,” Brend told me one evening. “And if it’s reduced to that, we’ve just lost everything. It’s not only the orangutans. It’s what you lose alongside them — the birds, insects, pollinators, all the environmental services that forests give, as well as a thing of beauty.”

Indonesia has long been known for its heavy-handed logging and plantation clearing. Rain forests fall faster in Indonesia, in fact, than almost anywhere else on earth. But Riaz Saehu, a spokesman for the Indonesia Embassy in Washington, D.C., told me that under the country’s new president, Susilo Bambang Yudhoyono, who took power in October 2004, the era of widespread clearing for oil palm may be coming to a close.

“There is an effort to reduce plantation expansion,” Saehu said. “What we do now is basically to promote sustainability.”

Many scientists are skeptical. “After 23 years there, I must say they can talk the talk but never walk the walk,” Lisa Curran, director of Yale University’s Tropical Resources Institute, told me in an e-mail. “The richest folks in Indonesia are owners of these oil palm plantations, so the corruption and patronage are linked to the very top of the food chain and power structures.”

In 2006, Curran was awarded a so-called MacArthur genius award for her work on deforestation in Indonesia. “Oil palm is a disaster all the way around for biodiversity if converted from logged forest or peat swamp,” she said. “Oil palm is fine if they actually put it on totally degraded lands — but they don’t.”

Even if new planting were stopped tomorrow, it would be too late for the Kubu people I met in Sumatra, whose once-rich rain forest pantry has been stripped bare by an oil palm plantation. “I have lost my garden,” a Kubu woman named Anna told me. “I cannot grow the rubber, bananas, chilies, and other things I need to feed my family.”

All forests release CO2 when logged. But Indonesia’s jungles and carbon-rich, peaty soils hemorrhage the stuff.

“We tried to stop them,” she said. “We started crying. But the man said, ‘Keep quiet or I’ll take you to the police.’”

In Jakarta, I told Art Klassen, regional director of the Tropical Forest Foundation — a science-based U.S. non-profit — about what I heard from the Kubu villagers. He did not seem surprised.

Indigenous land claims “are not enshrined in any legal framework,” he said. Oil palm, he continued, “occupies the land totally and squeezes out local populations. They become marginalized. They become slave workers for the oil palm industry basically. There is no other economic opportunity for them. That’s it. End of story.”

But it’s not just tribal people and wildlife that are displaced by oil palm. So, too, is the very atmospheric gas now at the center of the global warming debate: carbon dioxide.

All forests release CO2 when logged. But Indonesia’s jungles and carbon-rich, peaty soils hemorrhage the stuff. Last year, a World Bank report put the loss from deforestation at 2.6 billion tons a year, making the impoverished southeast Asian island nation the third largest source of CO2 on Earth, behind China and the United States.

The week I visited Sumatra, Greenpeace activists aboard the Rainbow Warrior were blockading a shipment of palm oil off its coast. A banner tied to the ship’s mast read: “Palm Oil Kills Forests and Climate.”

Perhaps the right kind of biofuels can help slow carbon emissions. But scientists say that by rushing into biofuel production in recent years, we failed to look ahead. What would make the best biofuel? Switchgrass? Soybeans? Sunflower seeds? Algae? That’s open to debate, but one thing is certain: Raw materials for biofuels should not be grown on plantations hacked out of tropical forests that are home to the richest concentrations of plant, insect, bird, and animal species on the planet.