As some U.S. states move to legalize marijuana, one issue has been largely ignored in the policy debates: the serious environmental effects of the marijuana industry. A new paper in the journal Bioscience, co-authored by ecologist Mary Power, details many of those impacts by focusing on marijuana cultivation in California, where most of the marijuana consumed in the U.S. is grown. Much of that cultivation is done in sensitive watersheds where the effects, says Power, can be devastating.

A biologist at the University of California, Berkeley, Power has studied the situation firsthand in the Eel River watershed in Mendocino County, which had recently started to recover after being damaged by decades of logging operations. In an interview with Yale Environment 360, Power describes how marijuana growers in that region now siphon off scarce water resources, poison wildlife, erode fragile soils, and overload waters with nutrients. What’s needed, she contends, is the legalization of marijuana at the federal level, which would likely drive down marijuana prices nationally.

“As long as there is a market that will pay enough to compensate for the brutally hard work they do to grow this stuff in forested mountains,” she says, “then it will keep growing.”

‘The eight to ten gallons [of water] a day that marijuana needs per plant is not going to be available to … the fish or this river.’

Mary Power: You probably know how intertwined those are. We are starting to use the term “gray market” because the laws are inconsistent between county, state, and federal jurisdictions. So what’s legal under some lenses is illegal under others, and that’s made enforcement very difficult. That, plus the economic woes of northern counties in California, means that there aren’t very many enforcement officers and their mandate isn’t crystal clear.

e360: Describe the typical location of a marijuana cultivation site in Northern California.

Power: You have one of the world’s most fragile, erosive landscapes, a landscape that is very easy to damage further. The guerilla growers are building poorly engineered, illegal roads, scraping off the forest, and then sometimes putting up hastily dug trenches that are just lined with plastic, high in the landscape so they can gravity-feed the water to their marijuana plants. And those can fail, taking hillsides down into the rivers.

What is very frustrating is that the Eel River was really starting to heal. It’s been about 50 years since the most devastating logging was done there. So the river was really deepening, the mature riparian vegetation was starting to reform complex channel habitats. The river was going from being just packed with fine sediments and too wide and too shallow to stay cool enough to support salmon, or sometimes even to allow their passage as they migrate between the river and sea. That was all starting to go in the right direction.. The Eel [River] is on this very pointed knife edge of recovering because of better land management. But that’s now being derailed and reversed because of the rapacious damage that the marijuana growers are doing all over the watershed.

e360: I was surprised to learn that marijuana is twice as thirsty as wine grapes. Where do growers typically get the water to irrigate this crop?

Power: They suck directly from the river. They also are dewatering the tributaries that start as springs in this landscape, which then don’t supply their cold groundwater to the river, so the river dries up and warms up. And the marijuana growers, like the regular populations, are tapping springs. In this geology and landscape, the water sources are usually seeping out of the hillside in places where fractures have allowed the water to surface. 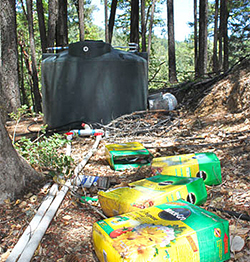 e360: And, of course, in a time of extreme drought, siphoning off this water is not helpful.

Power: No. Certainly this year and next, probably any water that is diverted into the eight to ten gallons a day that marijuana needs per plant is not going to be available to the watershed or the fish or this river.

e360: There’s a long list of pesticides, rodent poisons, and fertilizers that are used on these growing sites. I’ve seen a pretty ironic photo of leftover Miracle Grow containers on the forest floor. What’s the effect of this chemical mixture on the wildlife and on the ecosystem in general?

Power: They are killing all of the carnivores — hawks, martens, bears, mountain lions, bobcats —- that prey on the herbivores that eat the marijuana and the omnivores, like rats. The rodenticide is largely warfarin. It prevents blood from coagulating and, as some articles say, causes the victim to liquefy from the inside.

e360: Taken in totality, it seems like an environmental nightmare.

Power:It is. Here’s the other thing: When you’re adding fertilizer to the stream, you’re adding another ingredient to the witch’s brew that during drought is going to convert this cool, flowing system that could support salmon into a warm, disconnected, stagnant series of pools. If you have cool, flowing conditions, algae are good. They’re edible things, like diatoms. They actually are the source of the polyunsaturated fatty acids that make fish so healthy. So those are the good guys, but they require cool, flowing water. Many of the problematic species start to thrive when the water is stagnant or very low-flowing, and also when it gets warmer.

‘There are good growers who don’t want to damage the environment, and who want to make a living and not a killing.’

Picture a few specks of deep blue-green cyanobacteria. If you add nutrients — which could leak in if the growers are excessive [with fertilizer] — and it’s warm anyway, they’ll grow. The blue-greens will spread and become a little blanket that smothers the good algae. That can happen, though, even without extra nutrients, if there’s not enough water, or if it’s hot. Then the good algae die and release their nutrients, and that fuels the cyanobacteria that carpet them. So this little speck turns into a blanket, and can make a blue-green drape over the entire good algal assemblage. And a lot of those blue-green algae are neurotoxic in the Eel.

Power: That was the unintended consequence that happened. I like [American novelist] Wallace Stegner’s contrast between people who come to the West to make a living, and others who come to make a killing. So these folks came in to make the killing. And then there are cartels, too, that are starting to organize and make things even worse.

e360: When these sites are discovered, when they’re busted, how often do they get cleaned up, and to what extent can they be cleaned up?

Power:That’s very difficult. It always lifts your heart to see a very bad grower in your area have his crop carried out. But often, these guys have about three or four grows that are widely dispersed. So losing one, they can still make quite a profit that summer. And the agents, the wardens, are so understaffed that they don’t have the person-power to clean up the infrastructure or even remove it. So all the piping and tanks and things remain in place in the headwaters of our [UC Berkeley’s] reserve [in Mendocino County]. Fortunately for us, it was on the part that’s owned by BLM [the U.S. Bureau of Land Management], so the federal agencies paid to have about 70,000 plants helicoptered out. But they left all the black pipe and some bags of fertilizers. So volunteers, who are doing a lot of the cleanup, have to slowly backpack this stuff out, or else the bags will split open and the chemicals will get into the streams.

‘If it were legal in every single … place where there’s a market, then it probably could be grown in the sunshine.’

Power: I think it just makes it hard. There are good growers who don’t want to damage the environment, and who want to make a living and not a killing. So they get all of their plants registered, and they pay $500 every time the sheriff visits to make sure that the environment’s okay. So that’s going on, and then there’s been some rumors that the feds use the sheriffs’ lists of good, law-abiding — at least at the county-level or the state-level — growers. There’s been some concern that feds might use those lists to make easy arrests of people that are not going to shoot them. … Remember, the federal law doesn’t permit any growing. Obama clearly stated that he was not going to prioritize enforcement of the federal law, but federal law is still zero plant tolerance.

e360: Would full legalization, legalization at the federal level, make things better from an environmental standpoint?

Power: We think so. There are lots of uncertainties, but if it were legal in every single state, and every single place where there’s a market, then it probably could be grown in the sunshine.

e360: You mean that literally, right?

Power:And figuratively, too. The enforcement would be transparent, and the plants would be out in the open. They’d be doing better, because they need sun. They’re really an agricultural crop that would do well on agricultural land. And if the price dropped to the point where there was no incentive to do this harmful growing, then obviously the industry would collapse quickly. But if it’s just legalized state-by-state-by-state, I’ve heard the cartels are organized enough to keep pushing the crop east, where there still is a market and it’s still illegal. So as long as there is a market that will pay enough to compensate for the brutally hard work they do to grow this stuff in forested mountains, then it will keep growing.

e360: I think there might be some marijuana users who would be appalled to learn that they are supporting an industry with such serious environmental effects.

Power: Everybody thinks that it’s kind of a counter-culture, alternative, cool, green thing. And 70 percent is coming from California. It’s almost inevitable that they’re using weed that has really damaged a drought-stricken river system.

e360: You and your co-authors propose some interesting solutions to the environmental problems caused by legal cultivation, like eco-labeling. Talk a bit about that.

Power: The timber companies some years ago were talking about having a website stamped on the end of every two-by-four in a lumberyard. You could look at that website and get a video sweep through the watershed from which that timber was extracted. So there’s no reason we couldn’t have a zebra stripe on bags of marijuana that would let you use your iPhone to then look at a video of the conditions under which it’s being grown. The technology would make that relatively simple, unless people falsified it.

e360: What do you and your co-authors hope to accomplish by publishing this paper?

Power: It’s just heartbreaking to see the environmental damage that’s going on. And there’s not much support in the [California] legislature for environmental monitoring or cleanup or enforcement. All of those things are expensive and incredibly important, and yet all of the attention on the legalization issue has been diverted toward the really important medical questions, like what’s it going to do if young kids use it too much. Those kinds of issues have been front and center, and the environment has been pretty much overlooked.