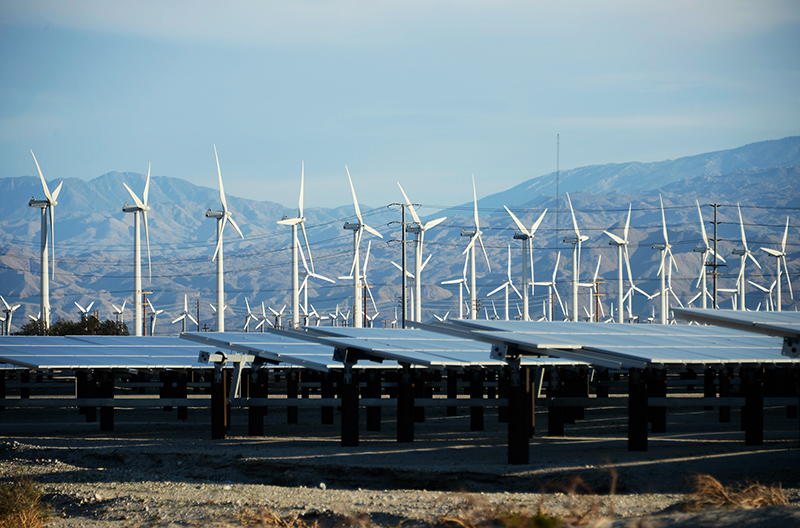 The tens of thousands of tons of natural gas that surged into the Southern California sky late last year were supposed to have fueled the region’s power plants and heated its homes. Instead, the massive leak at the Aliso Canyon storage site left California electricity providers racing to replace the lost supplies to avoid blackouts and recurring outages in the coming months.

But Los Angeles area utilities aren’t solely seeking more fossil fuels to fill the gap in natural gas. They are also turning to “virtual power plants”: sprawling networks of independent batteries, solar panels, and energy-efficient buildings that are tied together and remotely controlled by software and data systems. The goal of these virtual power plants is to collectively reduce customers’ energy demand at peak hours and provide renewable energy supplies in targeted areas. This would allow utilities to offset some of the needs for power from conventional sources and avoid disruption on the grid.

Energy experts say that the ongoing response to California’s natural gas shortfall may serve as a high-profile test case for virtual power plants, an emerging field of clean energy that is projected to more than quintuple in size in the United States within a decade, rising from about 4,800 megawatts in capacity in 2014 to nearly 28,000 megawatts by 2023, according to Navigant Research, a consulting and market research firm. Power providers in the U.S. and Europe are increasingly experimenting with these systems to help manage and harness the value of thousands of distributed energy systems — the various energy storage, efficiency, and renewable energy installations scattered across the grid.

“There’s been a significant uptick in interest from utilities and other power-sector shareholders to deploy these solutions for their different needs,” Omar Saadeh, a senior analyst at GTM Research, said by phone from San Francisco.

Propelling this demand overall is the nation’s ongoing shift away from a centralized electricity market — where hulking, fossil fuel-fired power plants send electrons across state borders via transmission lines — toward a network of localized and lower-carbon supplies, Saadeh said. “The whole notion that utilities are transitioning into a decentralized system is where this interest in virtual power plants and other technologies has really emerged,” he added.

In California, a natural gas shortfall from a major leak is speeding the adoption of these technologies.

GTM Research projects that just the software component of virtual power plants — known as “distributed energy resource management systems” — will soon double in market value, from roughly $50 million in 2014 to $110 million in 2018. Add in the renewable energy technology, batteries, and other components, and the virtual power plant market could grow from $1.5 billion in annual revenue in 2016 to a $5.3 billion market by 2023, with the U.S. taking $3.7 billion of that year’s total and Europe snagging $1.3 billion, Navigant projected in 2014. Peter Asmus, principal research analyst for Navigant in San Francisco, said the market may actually be worth much more, given the recent growth in residential and commercial battery systems from companies such as LG Chem and Panasonic.

In California, the gas shortfall resulting from the Aliso Canyon leak is speeding the adoption of these emerging energy technologies. The California Public Utilities Commission in late May ordered Southern California Edison (SCE), the region’s main power provider, to “expedite its purchase of energy storage” this summer to help “alleviate the electric reliability risks to the Los Angeles Basin,” a process that’s still ongoing. Utility commissioners also asked SCE to hasten the rate at which privately owned batteries, solar, and other distributed systems are connected to the grid.

SCE obtains most of its natural gas supplies from Southern California Gas Company, which owns the underground Aliso Canyon facility that leaked more than 97,000 metric tons of methane from late October 2015 through mid-February this year. Only about 15 billion cubic feet, or less than one-fifth of the facility’s capacity, remains available for electricity and heating service in the region, California regulators estimated.

Stem Inc., an energy storage provider, says it expects to accelerate some of its existing virtual power plant projects in the Los Angeles area as a result of California’s response efforts.

The startup uses batteries and software to help major retail and hospitality companies, such as Whole Foods and Marriott, reduce their electricity bills. In the last seven years, Stem has installed battery systems (occasionally paired with rooftop solar) in hundreds of large buildings across California. Batteries are charged when electricity rates are low. Stem’s software systems then analyze a building’s energy use along with information on utility rates. When power prices are most expensive, the system automatically reduces the use of utility-provided electricity and instead draws from the battery.

In this way, the owners of individual buildings can lower the “peak demand” fees that utilities charge them each month. But collectively, the benefits are even greater, John Carrington, Stem’s chief executive officer, said in a phone interview. Through its software, Stem can coordinate the systems in its customers’ buildings to reduce area-wide energy demand when power is suddenly needed. Stem received a contract in 2014 to provide SCE with 85 megawatts of virtual power in densely populated areas where existing supplies are constrained.

Carrington said Stem is now working with “all the Los Angeles-area utilities on very fast-responding and quick installations of our product.” For virtual power, he added, the response to Aliso Canyon “could really serve as an inflection point for the industry.” 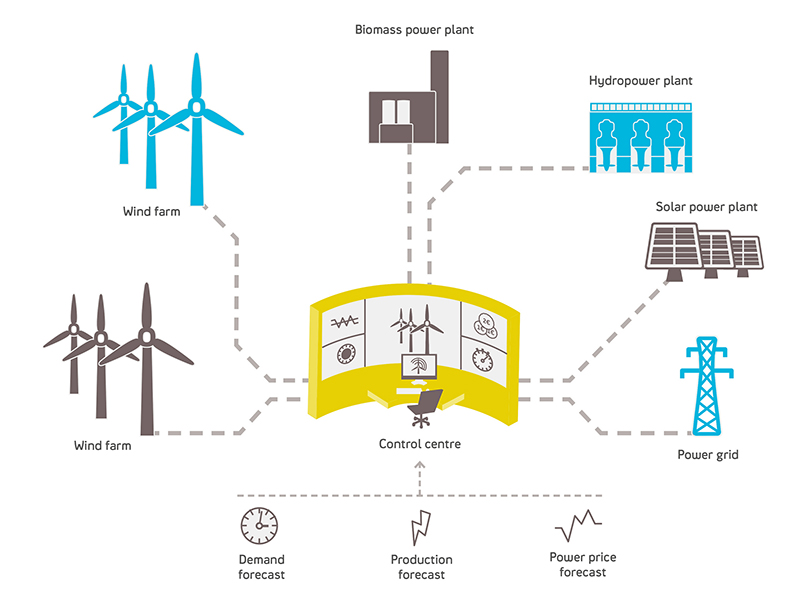 An illustration of a virtual power plant. STATKRAFT

Not all virtual power plants work exactly like Stem’s aggregated network of buildings, which use batteries and energy management systems. In fact, the definition of a “virtual power plant” is still a bit vague and subjective, especially since many of these technologies remain in the pilot and development stages. Generally, however, the systems follow one of three models.

The first is a supply-side system, which is more prevalent in European nations like Germany and Denmark, where small-scale renewable energy projects already abound. In this model, local governments and grid operators can coordinate the output of independent solar arrays and wind farms — which operate intermittently and at different hours — with hydropower, biogas, and other low-carbon resources, thus simulating the output of a 24-hour power plant. In November, German technology giant Siemens Corp. and the utility giant RWE said they would jointly build the IT backbone of a mass-market virtual power plant that will coordinate hundreds of megawatts’ worth of distributed energy projects such as wind and solar farms.

The second model focuses primarily on “demand response” — cutting consumption, through energy efficiency systems and software, during hours when electricity demand is highest. This reduces the need for utilities to fire up costly fossil-fuel “peaker” plants to provide limited spikes of supplies.

The basic premise of demand response — utilities charge large energy users a lower rate year-round in exchange for powering down during peak hours — has existed for decades. But modern software and data systems take what used to be a building-by-building approach and spread it across thousands of sites into a reliable, scalable virtual power plant, according to Sarah McAuley, senior director of marketing for EnerNOC, an energy software and services firm in Boston.

EnerNOC dominates this field in the U.S. The company pays the owners of commercial and industrial buildings to let it periodically reduce their power consumption when the grid is overburdened, or to avoid high electricity prices. EnerNOC’s software platform can notify manufacturers when they should switch into maintenance mode for a few hours, or advise office managers to scale back air conditioning use. A small device tied to the electricity meter then sends data to EnerNOC, which measures and tracks energy reductions at each individual site.

The company can offer those “negawatts” of reduced energy use to grid operators, which in turn pay EnerNOC for the service. EnerNOC’s largest market is the PJM Interconnection, which coordinates the movement of wholesale electricity among 13 Eastern and Midwestern states.

“Instead of meeting consumer demand for electricity by adding more electricity to the system, we pay people to reduce their usage,” McAuley explained in an email. “The effect is that there’s enough power to go around.”

The third model of virtual power plants is, like Stem’s approach, a mixed bag of assets such as battery storage, solar power, and energy efficiency systems that both reduce consumption and supply clean power in targeted ways. Navigant’s Asmus said this sector could see the most growth in the United States, particularly as the cost of battery systems continues to plummet and solar panels proliferate across U.S. rooftops.

Much of U.S. growth, however, will initially be concentrated in only a handful of states — primarily California and Hawaii, but increasingly New York and the mid-Atlantic states, as well. Some state legislatures and utility regulators have adopted rules, or are developing policies, that make it easier to integrate small-scale renewables systems into the broader grid. But in other areas, including the Rocky Mountain states, regulations haven’t caught up with the emergence of new electricity models.

“These are very nascent technologies,” said GTM analyst Saadeh, “and it’s a very nascent market, in terms of understanding from a utility and regulatory perspective.”

Virtual power plants make more economic sense in areas with high concentrations of wind and solar power, according to Saadeh. On their own, managing thousands of independent, intermittent renewable energy systems can create logistical challenges for utilities, which have to ensure that too much solar power doesn’t flood the grid at once or that customers can turn their lights on when the wind isn’t blowing. Power companies thus have greater incentive to tap technologies that best coordinate the benefits of those disparate systems, especially in areas with higher concentrations of renewables.

“A distributed grid with a high penetration of renewable energy needs some sort of flexibility,” Saadeh points out. “Virtual power plants offer that.”

Technology firms, utilities and regulators are also still in the early stages of figuring out the right market value for virtual power plants and how they should compete in the electricity market. The startup Olivine has several pilot projects in California that aim to answer those kinds of questions.

Until recently, little was known about the extent of methane leaking from urban gas distribution pipes and its impact on global warming. But recent advances in detecting this potent greenhouse gas are pushing U.S. states to begin addressing this long-neglected problem. READ MORE

“A lot of technologies are being developed, but there’s a big gap between that and actually getting to money and providing services to the grid,” said Beth Reid, Olivine’s chief executive officer.

In one pilot project with the utility PG&E Corp., an array of various, aggregated assets — including battery storage, electric vehicles, and more — are participating in the wholesale electricity market, just like a conventional power plant. The idea is to show that virtual power plants can provide flexible, fast-responding power services to the grid to help plug the intermittent supply gaps from wind and solar power, akin to a gas-fired peaker plant. Participants receive monthly payments for providing their power supply capacities to the pilot market.

Reid said she expected virtual power plants will ramp up dramatically as pilot projects help to sort out the different technologies and systems, and states continue removing regulatory hurdles.

“There’s still a lot of experimentation about who actually owns the resources of a virtual power plant and different mechanisms in different states,” she said. “But I think it’s going to significantly scale [up] — not even in the next decade, but the next three to five years.”