The work began at low tide on the Mispillion marsh on Delaware Bay. A field team hauled coconut fiber logs the size and heft of rolled carpets out beyond the tall cordgrass to the gray mud flat that extended from the marsh edge. Ten or so yards out, where the mudflat met the open water, an array of gray stacked blocks made of marine limestone and oyster shell was already set out. Looking like the battlements of a buried castle, this permeable reef was designed to deflect and dissipate the energy of the bay’s water as it flows toward the marsh.

If it works, this project will forestall further erosion of the existing marsh, whose banks are being undercut and washed away. And it will allow new sediment to build up behind the coco-fiber “biologs” that were staked into place to form the new marsh edge, a “living shoreline” that is the latest effort to protect and restore Delaware Bay’s tidal wetlands. 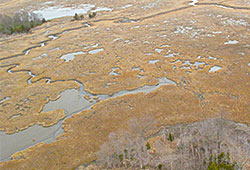 Like coastal wetlands around the world, they are in urgent need. Once considered wastelands, wetlands were diked to create grazing and farm lands — in Europe for the last 2,000 years, in North America for the last 400. More recently they were dredged for shipping channels, sprayed and ditched for mosquito control, and exposed to nutrient and pollution runoff from upland agriculture and to sediment from upstream development. Finally recognized for their biodiversity, for providing productive nursery habitat for fish and shellfish and feeding grounds for migrating birds, wetlands gained a worldwide recognition with the 1971 international Convention on Wetlands in Ramsar, Iran. The next year the U.S. enacted the Clean Water Act, which gave wetlands such as those along the Delaware the protection of law.

Yet despite government, NGO, and regulatory efforts, wetland losses continue unabated. In the U.S., for instance, even with a “no net loss” policy in place, between 1998 and 2009 coastal wetland losses increased from 60,000 to 80,000 acres per year. In the Delaware Bay, where Danielle Kreeger, science director of the Partnership for the Delaware Estuary, was overseeing the construction of this “living shoreline,” tidal wetlands are being lost at the rate of an acre a day, this in the East Coast’s second-largest estuary, where 126,000 of its 400,000 acres of wetlands are considered by the Ramsar Convention to be of international importance.

Rising global sea levels and temperatures will only increase these losses. “As sea level rise [now 4 millimeters (mm) per year in Delaware Bay] reaches 10 mm per year, things could begin to become bleak,” says Kreeger. “By 2100 the Delaware could lose 91 percent of its wetlands. So the question is, how much do you need to have in the bank to keep it all from going under?”

In Delaware Bay, as in estuaries around the world, the search is on for any kind of hedge against future losses of coastal wetlands. This sense of urgency also comes from a new understanding of the value of wetlands: Coastal communities, faced with increasing storm activity and flooding, have realized that wetlands may provide the only real protection from floodwaters and ever higher tidal surges that can overwhelm once-protective embankments, bulkheads, and sea walls.

Scientists have discovered over the last few years that sea grass beds, salt marshes, and mangroves sequester and store far more carbon than equal areas of tropical forest. And because most of this “blue carbon” is stored in submerged soil, it is released far more slowly than carbon stored in forest vegetation. 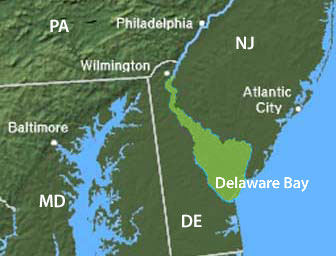 Delaware Bay is the second largest estuary on the U.S. East Coast. DELAWARE.GOV

If all goes well with the Mispillion living shoreline installation at Milford, Delaware, sea grasses will take root in the new sediment, and masses of ribbed mussels will cling to the roots and filter the water as they feed. Where abundant enough, ribbed mussels can filter all the water that comes through a marsh on any single tide. Kreeger considers these “super-bivalves” key to effective marsh restoration in the Delaware estuary — key, in fact, to the estuary’s water quality and ecology.

In the channels of the new marsh, young fish and shellfish will find shelter and food. On the limestone and oyster shell reef, a new oyster bed will form and spread. The elevation of the restored marsh will increase, enough to keep pace with the rate of sea level rise. And the wetland’s store of sequestered carbon will be secured for thousands of years to come.

Hopes are high for such living shorelines, not only in the Delaware estuary. In Alabama, “100-1000” is a partnership of NGOs, government agencies, and private businesses formed to attempt to restore the oyster reefs, seagrass beds, and coastal marshes of Mobile Bay. For every mile of “living shoreline,” they expect to protect some 10 acres of intertidal habitat: 100 miles of living shoreline will restore 1,000 acres of marsh and seagrass.

On the Delaware, a history of dikes, ditches, and channels left a legacy of degraded wetlands.

Judy Haner, marine program director for The Nature Conservancy in Mobile, who is one of four 100-1000 administrators, says she hopes the project will encourage private landowners, who own 80 percent of the Mobile Bay coastline, to quit building sea walls and bulkheads and build living shorelines instead. To make the transition easier, the Mobile District of the U.S. Army Corps of Engineers has developed a living shoreline permit.

In Maryland, the law now requires that before anyone can build a bulkhead or sea wall they have to demonstrate that a living shoreline wouldn’t be a viable alternative.

There are problems, however, that a living shoreline won’t solve. Along many Delaware estuary wetlands, a 300-year history of dikes, ditches, and channels left a legacy of degraded wetlands, suffering dysfunctional hydrologies, and invaded by phragmites, a poor substitute for the native cattails and grasses. Restoring the natural water flows will be key to efforts on such marshes.

This is the major issue in Europe where coastal wetlands have been diked for at least 2,500 years. In the Netherlands, for instance, along the Wadden Sea, farmers have for centuries grazed cattle on land created by raised embankments that blocked the sea. In fact, there’s not a salt marsh along the Wadden Sea’s 300-mile coastline that’s older than a hundred years. Restoration efforts, therefore, have begun with either the natural collapse of the embankments or with their removal; success will depend on how the land is reshaped when once more exposed to the tidal flow. Work by Jan P. Bakker of the University of Groningen suggests that one of the larger problems may be re-establishing the biodiversity of salt marshes so long gone.

Restoring the hydrology to long-diked marsh was the issue when, as part of its Salem, New Jersey, generating station’s federal Clean Water Act permit, Public Service Gas & Electric was required to protect fish nursery habitat among thousands of acres of Delaware Bay tidal wetlands. The utility company took a historical approach to restore or preserve some 20,000 acres of salt marsh on both the New Jersey and Delaware shores of the estuary.

One of the keys to maintaining restored tidal wetlands is allowing them room to migrate inland and upland.

“We looked at still natural — or at least less manipulated — marshes, looked at the vegetation mix, the hydrology, and attempted to bring that back,” says Brenda Evans, the company’s senior environmental specialist, who has worked on the project since its inception in 1994.

Phragmites, she says, were a huge challenge and only herbicides finally reduced the dense stands. But getting the hydrology right was key to the restoration efforts. On the 3,000-acre marsh project in the Alloways Creek watershed in Salem County, N.J., it was the hydrology that controlled the sedimentation, the salinity, and the return of native vegetation.

After nearly 20 years the marsh appears very like the reference marshes after which it was modeled. It also appears secure. “After Hurricane Sandy, as far as the restored marshes were concerned, you couldn’t even tell a storm had been through,” she says.

But Evans has seen the effects of sea level rise on the marsh. “You can see the migration of seawater upland. Increased flow is increasing sedimentation, the marsh elevation is rising, and we’re seeing transitional vegetation at the marshes’ upland edges.”

This last is not a bad thing. One of the keys to maintaining restored tidal wetlands is allowing them the room to migrate inland and upland. Living shorelines only address the water side of the marsh equation.

One of the estuary’s largest marsh complexes, the Milford Neck Conservation Area, has a dynamic, extensive, and somewhat distressed hydrology. Owned by the state of Delaware, Delaware Wild Lands, and The Nature Conservancy, these 10,000 acres of beaches and salt marshes are vital to the Delaware Bay’s migratory bird population as well as the ancient horseshoe crabs that arrive in the bay to mate en masse each spring.

“By restoration we don’t mean returning to some pre-colonial state,” says Brian Boutin, The Nature Conservancy’s program director in Delaware. “What we’re looking for is a healthy marsh, resilient to conditions today and in the future.”

The process begins with a study of the hydrodynamic and salinity regimes. “Once we figure out how the marsh is functioning, we’ll come up with restoration alternatives to reestablish the tidal flows and restore habitat for striped bass, white perch, weakfish — the charismatic [Delaware] Bay species.”

What’s needed, too, is open upland into which the marsh can migrate. “Otherwise, with sea level rise, we’ll get choked out,” says Boutin.

Even the small 1,250-acre Hamilton-Trenton-Bordentown marsh in New Jersey, the Delaware’s northernmost tidal freshwater wetland, has the added buffer of 1,700 publicly-owned upland acres. The marsh is hemmed in by towns and suburbs and crossed by highways and rail lines, but preservation efforts by Friends of the Marsh and the Delaware and Raritan Greenway Land Trust have managed to maintain a vital biodiversity in rare freshwater tidal habitats that include stands of wild rice, tree-lined swamps, and upland thickets of mountain laurel and rhododendron.

Everyone working on tidal wetlands restoration agrees that each project requires long-term monitoring. Sometimes there are pleasant surprises. “Near Tinicum [on the Delaware in Pennsyvlania],” says Kreeger, “phragmites had pushed all the cattails and wild rice out of the freshwater tidal marsh. They were gone. And then Hurricane Floyd hit in 1999. It somehow knocked back the phrag, and the wild rice returned. Somehow it was there in the seed bank all along. And it’s still doing nicely.”