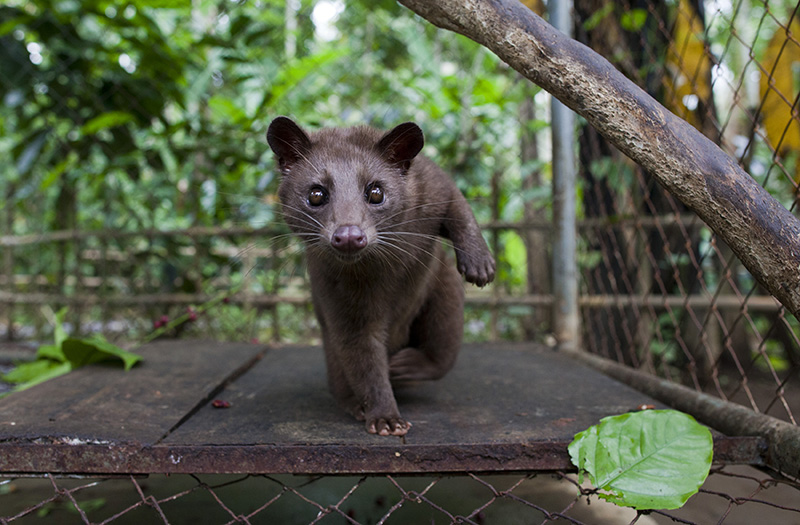 An Asian palm civet at a wildlife farm in Bali, Indonesia. PAULA BRONSTEIN/GETTY

More than a decade ago, looking to slow the decimation of wildlife populations for the bushmeat trade, researchers in West Africa sought to establish an alternative protein supply. Brush-tailed porcupine was one of the most popular and high-priced meats, in rural and urban areas alike. Why not farm it? It turned out that the porcupines are generally solitary, and when put together, they tended to fight and didn’t have sex. In any case, moms produce only one offspring per birth, hardly a recipe for commercial success.

Wildlife farming is like that — a tantalizing idea that is always fraught with challenges and often seriously flawed. And yet it is also growing both as a marketplace reality and in its appeal to a broad array of legitimate stakeholders as a potentially sustainable alternative to the helter-skelter exploitation of wild resources everywhere.

Food security consultants are promoting wildlife farming as a way to boost rural incomes and supply protein to a hungry world. So are public health experts who view properly managed captive breeding as a way to prevent emerging diseases in wildlife from spilling over into the human population. Even Sea World has gotten into the act, promoting captive breeding through its Rising Tide nonprofit as a way to reduce the devastating harvest of fish from coral reefs for the aquarium hobbyist trade.

Conservationists have increasingly joined the debate over wildlife farming, with a view to keeping the trade in bushmeat and exotic pets from emptying forests and other habitats. Writing in the journal Conservation Letters, wildlife trade researchers Dan Challender and Douglas C. MacMillan argue that regulations and enforcement alone cannot end the current poaching crisis. “In the medium term, we should drive prices down,” they write, with “sustainable off-take mechanisms” such as regulated trade, ranching, and wildlife farming. They say it has worked before. Successful introduction of carefully regulated crocodile ranching during a mid-twentieth century poaching crisis across Africa “led to reduced poaching pressure on wild populations, even in countries with weak governance,” they note.

But another article, published in April in the journal Global Ecology and Conservation asks the question, “Under what circumstances can wildlife farming benefit species conservation?” Author Laura Tensen, a conservation geneticist at the University of Johannesburg, provides a broad review of wildlife farming projects worldwide and answers, in effect, “not often.”

Swaziland has proposed legalizing the rhino horn trade, in a bid to make rhino ranching a commercial enterprise.

And one of the few success stories she cites might not appeal to some conservationists: The shift in the 1930s from wild-caught to farmed animals was a key to the recovery of many North American mammal species in the luxury fur trade.

The debate over the conservation potential of wildlife farming is likely to attract widespread attention next month, when the 182 member nations of the Convention on International Trade in Endangered Species (CITES) meet in Johannesburg. Neighboring Swaziland has proposed legalizing the rhino horn trade, in a bid to make rhino ranching a commercial enterprise. That effort is almost certain to fail. But given the reality that “trade restrictions agreed through CITES are failing in many instances,” as Challender and MacMillan put it, farming of other wildlife species is likely to play an increasing role in the anti-poaching debate.

Wildlife farming is of course not new. Aquaculture dates back at least 8,000 years, to small eel ponds kept by aborigines in southeastern Australia. Farmed carp, salmon, trout, and other fish species, as well as mollusks and crustaceans, now supply more than half of all seafood produced for human consumption. With sales set to reach $203 billion a year by 2020, aquaculture is by far the biggest sector of the wildlife-farming marketplace.

Nor is the idea of wildlife farming as a conservation tool particularly new. Ranchers in parts of southern Africa that are too dry for domestic livestock began raising wildlife more than a century ago, for trophy hunting, the meat trade, and tourism. Those ranches played a critical role in the recovery of a mountain zebra subspecies, black wildebeests, white rhinos, and bontebok and sable antelopes, among others, according to Andrew Taylor, co-author of a recent report on wildlife ranching for South Africa’s Endangered Wildlife Trust.

What’s different now is the urgency of the commercial push for wildlife farming everywhere, and the extraordinary range of species being farmed. A pilot study in Vietnam last year identified 185 farmed species in that country alone, including porcupines, flying foxes, crab-eating macaque monkeys, Asian palm civets, wildcats, and multiple rodents and reptiles. The survey, organized by the UN’s Food and Agriculture Agency (FAO), urged the creation of a national wildlife farm registry, training of Vietnamese farmers in food safety and disease prevention, and development of a system of regular veterinary care. 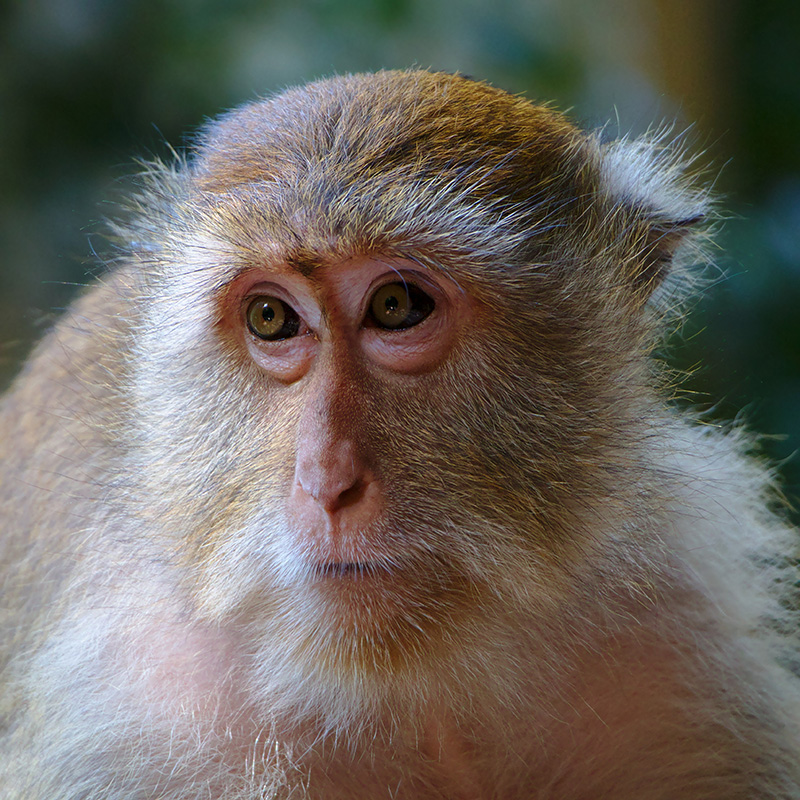 One problem with captive breeding, Tensen points out in her review, is that it’s inevitably more expensive to house, feed, and otherwise care for animals in captivity than to collect them from the wild. In parts of Asia where eating wildlife is a status symbol, people may be willing to pay that added price. But that does not appear to be the case in much of Africa, where hunters seek bushmeat for basic nutrition. Even relatively wealthy and educated consumers in the developed world are often reluctant to pay for sustainability.

For instance, people who keep saltwater aquariums prize brightly colored mandarinfish. According to a website for hobbyists, fishermen in the Philippines catch them “with a mini-spear gun,” which fires “long, double pronged sewing needles into the side of the fish.” Many fish die, and targeting large, showy males also skews the reproductive behavior of the survivors in the wild. Hence mandarins are already commercially extinct in many areas.

But captive breeding of mandarins failed in the marketplace, according to Scott Fellman, a supplier to the trade, because “the mass market didn’t want to pay $40 for a captive-bred fish they could get for $12 from wild-caught sources.” Fellman called it “extreme hypocrisy.” But the mandarin story was hardly unusual. Researchers have managed to breed about 15 percent of marine aquarium species in captivity. But only about six percent are available at the retail level.

Because wild species can be so difficult to breed in captivity, farmers of terrestrial species also routinely re-stock from the wild. Studies have shown that 90 percent of cane rat farms in Ghana, half of porcupine farms in Vietnam, and up to three-quarters of green python farms in Indonesia still take animals from the wild. At one point, even the FAO appeared to be arguing that farming of musk deer in Asia could be good for conservation — while it simultaneously provided instructions for capturing musk deer from the wild. Instead of preventing poaching, this continued reliance on wild stock serves, according to Tensen, simply to launder illegal bushmeat.

If you ban wildlife farming, people are just going to go around it,’ says Peter Daszak, of EcoHealth Alliance.

“There’s been a lot of money squandered on trying to raise wildlife as a way of reducing the unsustainable harvest for food,” said David Wilkie, director of conservation measures and communities for the Wildlife Conservation Society (WCS). Among other problems, the feed conversion ratio — how many pounds of feed an animal consumes to yield a pound of meat — “is terrible, especially versus things like pigs and chickens that we have raised for 10,000 years. We know how to raise chicken really well,” he said, and poultry is thus more practical than wildlife farming as a protein source for weaning communities away from bushmeat. Newcastle virus, the most common killer of chickens, used to be an impediment to rearing poultry in remote areas, he said, because the only vaccine required refrigeration. But a WCS study in Zambia recently demonstrated that a new thermostable version of the vaccine can help boost poultry production at the village level by four- to seven-fold.

Juan Lubroth, chief veterinarian for the FAO, echoed this call for “sustainable intensification” of livestock farming. “We have come a long way from what we were promoting ten or 20 years ago,” he said, in understanding the dynamics — and the difficulties — of wildlife farming.

After reading Tensen’s paper, Peter Daszak, president of EcoHealth Alliance, gave the equivalent of a long, slow whistle of dismay at the work ahead. Through its EcoHealthy Pets site, his organization advocates captive-reared animals for the pet trade, as both a conservation and public health measure. “Anyone working in this field knows there are arguments for and against whether you should encourage wildlife farming,” he said in an interview with Yale Environment 360. “What Tensen has done, to my mind for the first time, is try to objectively assess the reality of wildlife farming, and it really does reveal some interesting stuff. I agree with her — in the majority of cases, it’s not good conservation. It’s unfortunate, but true.

In an interview with Yale Environment 360, wildlife activist Judith Mills describes how the legal farming of tigers in China is fostering a trade in tiger bone wine and skins that is imperiling the world’s beleaguered population of wild tigers. READ MORE

I’m going to look at our work with wildlife farming in China and see does it fit these criteria, and already I can see there is weak control.

“The bigger problem,” Daszak continued, “is what is the alternative? If you ban wildlife farming, people are just going to go around it.” The answer, he suggested, for both the pet and food trades is to focus on “a limited range” of farmed species that meet the criteria for sustainability, as EcoHealthy Pets now does.

The challenge is to persuade people accustomed to exploiting an entire planet’s species to get by with perhaps a few hundred. But the danger otherwise is that we will end up on a planet with no wildlife at all.