As President Barack Obama interprets what the election told him about his priorities for a second term, how much weight will he give to global climate change? On his very crowded list of pressing issues, where will climate action rank?

It should be near the top of his agenda. In the wake of Hurricane Sandy, with the U.S. public increasingly accepting the stark reality of climate change, he has an unprecedented opportunity to take bold action. Although polls have placed global warming far down the list of national priorities this year, they’ve also shown that a growing bipartisan majority of Americans wants the president and Congress to confront this issue. It is an unorganized and mostly silent majority so far, but it exists, and the president has the skills to mobilize it.

President Obama sent an encouraging signal in his victory speech in Chicago when he said, “We want our children to live in an America that isn’t burdened by debt… that isn’t threatened by the destructive power of a warming planet.” After a campaign in which he had largely ignored the issue, Obama’s mention of climate change at such a key moment was striking. One of the benefits of political campaigns is that our leaders learn things outside the Beltway.

If he follows through on his soaring election-night rhetoric, the president will find public support for action. A series of public opinion polls conducted during the campaign by the Yale Project on Climate Change Communications found that 70 percent of Americans now accept that climate change is real; 54 percent acknowledge it is caused mostly by human activities; 74 percent believe it is influencing our weather; 57 percent say it is a growing threat to people in the United States; and 58 percent say they’re worried about it. The Yale polls were confirmed by similar results in October from the Pew Research Center, among others. And these polls were conducted before Hurricane Sandy, which almost certainly would have increased all of these numbers.

Obama should call on the public to create a hailstorm of calls to Congress, demanding it support a new climate bill.

So, what can President Obama do to cultivate, mobilize and build upon this thus-far largely silent majority that supports action on climate change? Here are five opening suggestions:

First, soon after his inauguration, the president should address the American people in a televised speech dedicated to the imperative that we must confront climate change and make the transition to a clean energy economy. He should not let the memory of Sandy fade. He should call on the public to create a hailstorm of calls to Congress, demanding that it support a new climate bill and the president’s climate-action agenda.

Second, the president should demonstrate that climate change is not a partisan issue. He should convene committed leaders from both parties and seek their advice on building a trans-partisan coalition to address climate and energy security aggressively over the next four years. 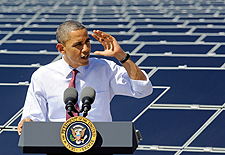 These need not be the usual suspects from Congress. Instead, they might include Democrats such as former U.S. energy secretary and New Mexico Gov. Bill Richardson and former Gov. Bill Ritter, whose policies created thousands of clean energy jobs during his tenure in Colorado. They should also include members of the rational wing of the Republican Party. Among them are current and former Republican officer holders who “get” climate change, some whom lost reelection because they took a stand on the issue. These include former Gov. Charlie Crist of Florida; former U.S. Rep. Bob Inglis of South Carolina; Utah’s former Gov. Jon Huntsman; California’s former Gov. Arnold Schwarzenegger; and Sen. Susan Collins and outgoing Sen. Olympia Snow, both of Maine. Then there’s New York’s Mayor Michael Bloomberg, an independent who endorsed Obama as the candidate most likely to deal with climate change, and New Jersey Gov. Chris Christie, who braved condemnation by his party and created the most reassuring moment of the campaign when he showed Republicans and Democrats can work together, putting people above politics.

Third, the Administration should lead the long-overdue development of a national roadmap to a clean energy economy. Each president is required by law to send Congress a national energy policy plan every two years, detailing how the nation will address energy supply and energy conservation to create jobs, enhance national security, and protect the environment. The Obama Administration has yet to comply. Obama acknowledged earlier this year that the current national energy policy was a “hodgepodge” of goals and programs scattered across various agencies. He could appoint a presidential commission that includes economists, energy experts, mayors, and governors to develop the key elements of a roadmap.

In the meantime, Obama should direct the Department of Energy to develop a methodology to calculate the full life-cycle benefits and costs of America’s energy options, including social, environmental, security and ecosystem service impacts. Such a tool would turn the president’s indiscriminate “all of the above” energy policy into a “best of the above” energy plan.

There is overwhelming public support for renewable energy, which along with efficiency, is the most sustainable way to achieve greater energy independence and reduce the emissions that contribute to global warming. On the eve of the first presidential debate, an independent poll by Hart Research Associates found that 92 percent of registered voters, including 84 percent of Republicans, considered it important for the nation to develop solar power.

Fourth, Obama should champion the de-carbonization of federal fiscal policy — all the ways an Administration and Congress influence the economy with revenues and disbursements. Bipartisan interest in tax reform is a good place to start. The groundwork is already being done by the National Academy of Sciences, which is putting finishing touches on a carbon audit of the tax code at the direction of Congress. Obama could reconstitute the bipartisan National Commission on Fiscal Responsibility and Reform to identify other fiscal policies that could be “de-carbonized” without harming national security or the economy, including the government’s massive farm and transportation bills.

The president should set a goal of making the U.S. the world’s most energy efficient industrial economy.

Fifth, President Obama should use his bully pulpit and organize the government’s various energy efficiency programs to launch a national campaign on energy productivity. He should establish the goal of making the U.S. the most energy efficient industrial economy in the world. Today, our economy wastes 86 percent of the energy it consumes — an unsustainable squandering of resources that takes money away from businesses, communities and households; increases pollution; contributes to climate change; and makes it less likely the U.S. economy will be robust and competitive. A high-profile campaign on energy productivity could be a critical step in cutting this enormous waste.

If this is, indeed, an actionable moment on issues related to climate change, it would be poetic justice. For it would come right after the media leaders in New York who have ignored this issue, and the policymakers in Washington who have been too timid to address it, experienced up close what happens when climate change injects its steroids into extreme weather events.

In a dream scenario, the monster storm and its terrible destruction along the East Coast would end the influence of climate deniers in Washington. Congress would wrestle free from the grip of the carbon lobby to pass an equitable, transparent, and effective market-mechanism that rapidly reduces U.S. greenhouse gas emissions. Citizens would demand it, and President Obama would use his oratorical gifts and executive powers to lead the nation to a low-carbon economy.

When Barack Obama won the presidency in 2008, environmental-ists were optimistic that their issues would finally become a priority at the White House. So how is Obama doing? Last year, Yale Environment 360 asked a group of environmentalists and energy experts for their verdicts on the president’s performance. READ MORE

It’s likely most Americans would support this scenario — by bigger majorities, in fact, than Obama won in the election. Another poll by the Yale Project on Climate Change Communications last March found that 58 percent of Americans think Congress should be doing more to address global warming; 54 percent think President Obama should do more; 61 percent think the fossil energy industries should be held responsible for the hidden costs of their fuels; 65 percent support an international climate treaty; and 63 percent think the U.S. should act on its own, no matter what other nations do.

So now that he has won his last election campaign, will Barack Obama confront what is arguably the mother of all threats to our future? Among all the big and contentious issues he must deal with in his second term, there is no bigger legacy he can leave the nation, no greater opportunity to make the United States the moral leader of the world again, and no bigger standard by which history will judge him.