In recent decades, European fisheries policy has been a slowly unfolding environmental disaster. Pumped up by tens of billions of euros in European Union subsidies, fishing fleets ballooned to 100,000 vessels, including many industrial-scale ships that severely depleted waters in Europe and beyond.

The goal was to prop up a politically powerful fishing industry — regardless of scientific warnings that fish stocks were in peril — and the results have been predictable. Numerous studies have shown that roughly 80 to 90 percent of many European fish stocks are being fished unsustainably. In the Mediterranean Sea, for example, scientists reported last year that 52 of 65 fish stocks are in critical decline. The situation has deteriorated so severely that from 1995 to 2010, fish landings in the EU fell from 8 million to 5 million metric tons.

Now, however, serious reforms are being launched, thanks to Maria Damanaki — a crusading EU Commissioner for Maritime Affairs and Fisheries — and alarm and outrage in the European Parliament. The parliament voted earlier this month to back Damanaki’s key reforms, including reducing catch quotas to sustainable levels; cutting subsidies and targeting them at fisheries that stay within the so-called “maximum sustainable yield”; ending the practice of fishing boats discarding a quarter of their catch, as they toss back less desirable species for more profitable ones; and tightening up woefully lax or non-existent enforcement of fisheries regulations. Earlier this week, fisheries ministers from member states met in Brussels and accepted some of Damanaki’s proposed changes. 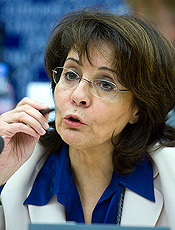 “We need to change our policy if we want to continue to eat fish,” said Maria Damanaki, EU Commissioner for Maritime Affairs and Fisheries. EUROPEAN PARLIAMENT/PIETRO NAJ-OLEARI

“What we had in the past was an aggressive policy against fish stocks, the oceans, and the environment,” Damanaki said in an interview with Yale Environment 360. “We need to change our policy if we want to continue to eat fish.”

Joining Damanaki in the push for a radical overhaul of EU fisheries policies have been two powerful women in the European Parliament — Ulrike Rodust, a Social Democrat from Germany, and Isabella Lövin, a Green Party member from Sweden. “Damanaki, Rodust, and Lövin are the three strong women behind fisheries reform,” says Rainer Froese, a prominent marine biologist with the Geomar-Helmholtz-Center for Ocean Research in Germany. “Without them, the reform would not have happened. The old boys networks [of fishery interests] would have prevailed. The proposal by the EU parliament marks a historic watershed of fisheries management. Finally, Europe is on its way to implementing sustainable, healthy, and profitable fisheries.”

Though momentum is clearly on the side of Damanaki and the reformers, the battle is far from over. In the coming weeks, the parliament; the Council of Europe, composed of the EU’s 27 member states; and the EU Commission will attempt to forge a joint strategy. The parliament wants to introduce a ban of discards starting in 2014. It sets 2015 as a deadline for managing fish stocks within the bounds of “maximum sustainable yield,” with the aim of beginning to regenerate fish stocks by 2020.

“I’m very confident that we can agree on a text in the first half of 2013,” says Damanaki.

But the thicket of European bureaucracy, coupled with powerful push-back from fishing interests in European countries already experiencing widespread unemployment, guarantees a battle to weaken Damanaki’s and the Parliament’s proposed reforms.

There’s “a great risk that the ambitious decisions by the European Parliament are being watered down by the friends of overfishing in the council of member states, for example Spain and France,” says Thilo Maack, oceans and biodiversity campaigner at Greenpeace Germany.

“The Council has been much more reluctant to embrace change, so we look towards the Parliament to hold the line and fight hard in the negotiations,” says Uta Bellion, director of the European Marine Program of the Pew Charitable Trust. She notes that reforms will be considered by the very same ministers who “are greatly to blame for the current state of EU fisheries.” But she is confident that Damanaki will be able to push through major changes. “Her tireless engagement for ambitious reform has been a door-opener for change,” says Bellion.

Pushback from fishing interests guarantees efforts will be made to water down reforms.

Since taking office in 2010, Damanaki — a former left-wing politician in Greece who was arrested and tortured while helping lead an uprising against Greece’s military junta in 1973 — has built on rising public demand for a departure from past fisheries policies. Virtually all major environmental groups active in the EU — including Greenpeace, the Pew Environment Group, and WWF — have battled for reforms, joined by prominent chefs like the UK’s Hugh Fearnley-Whittingstall and Germany’s Tim Mälzer.

“If you look at the common [EU] fisheries policy, it is a colossal failure,” Ólafur Ragnar Grímsson, president of Iceland, which has yet to join the EU, said last month at the World Economic Forum in Davos, Switzerland. “It is paradoxical that we [Europeans] present ourselves as the most enlightened policy leaders while in our backyard in the last 40 years there has been a colossal destruction of fish stocks.”

As the EU shoveled billions of Euros of subsidies to the continent’s fishing fleets to build new boats, regulators also set quotas for allowable catches at a level 40 percent higher than scientists had recommended, according to Ulrike Rodust, the chief negotiator for fisheries for the European Parliament. Stocks of famed species such as giant bluefin tuna plummeted, as did swordfish, mackerel, cod, hake, and dozens of other species from the North Sea to the Mediterranean. A 2012 EU report estimated that 78 percent of the continent’s fish stocks were overfished.

One of Damanaki’s first observations upon taking office was that European governing institutions were not responding to the public outcry about over-fishing but were largely concerned with making the owners of large, industrial fishing vessels happy. “When I took office, only the owners of big vessels were represented in Brussels,” she recalled. “It was one of the first fights to bring representatives from small vessels, which operate more sustainably, into our advisory councils.”

Damanaki wants to ban the widespread practice of throwing unwanted fish back into the sea.

Current subsidies to the fishing industry in the EU are 1.9 billion Euros ($2.48 billion) annually, complemented by 1.4 ($1.83) billion Euros in exemptions from fuel taxes. These are considerably smaller than in the past, as fishing fleets have been wildly overbuilt and are chasing far fewer fish. Today, the EU has 83,000 vessels, far more than can fish Europe’s waters sustainably.

Damanaki wants to enact laws and regulations requiring fisheries managers to rigorously follow the advice from scientists such as those from the International Consortium for the Exploration of the Seas (ICES), a multilateral scientific body that carries out stock assessments. She is seeking a ban on the widespread practice of throwing unwanted fish back into the sea dead. This practice, called discarding, has led to the waste of 1.7 million tons per year, almost a quarter of the total catch, according to EU estimates. Damanaki also has pushed for reducing the large subsidies and has asked that future payments be tied to even stricter sustainable practices.

At first, the fishing industry staunchly opposed Damanaki’s reforms. Now, however, fishing interests, which are facing determined political opposition, are taking a more constructive approach. The industry “shares the Commission’s concern that sustainability be at the heart of the future Common Fisheries Policy,” Javier Garat, president of the trade group Europeche, wrote to the president of the EU Parliament in early February. But he said the industry opposes “the radical aim to ban the practice of fish discards and the obligation to register and to land all caught species” starting from 2014, because it foresees massive storage problems when fishermen bring back all the fish caught and not just the species they were seeking. The objective of achieving maximum sustainable yield levels by 2015, is “too rigid and unrealistic,” according to Garat.

A 2012 EU report estimated that 78 percent of the continent’s fish stocks were overfished.

Damanaki says she wants to be seen as somebody who cares about fishermen and the fishing industry, too. “If we have their cooperation then implementing the reform will be much easier,” she said, noting that the industry understands that it has little future if overfishing continues.

“In my country, there was a lot of irresponsible spending,” said Damanaki, referring to her native Greece, “and what we do with the oceans is similar — the fish is our capital and we are spending it too fast. I want to make sure we have money in the bank in the future.”

A key point of contention is discards. If fishermen are no longer allowed to throw unwanted fish back into the ocean, this affects the whole production chain. The industry wants to postpone the ban, due to go into effect in 2014. The commissioner says that she is open to phase the ban in incrementally, but not to postpone it. “I am sure that we will see a lot of smart solutions once the ban is in effect,” she said. “There will be larger storage facilities for fish that are landed and new ways to commercialize formerly unwanted fish.” Less valued species could be used for food for aquaculture, she said, or sold to countries like China, where fish unwanted by Europeans are often seen as a delicacy.

Battles over reductions in subsidies also are inevitable. “We can’t spend money any more just to build bigger vessels, send them in the oceans and they have nothing to fish there,” Damanaki says. She wants EU money given specifically to smaller, locally owned vessels and used to buy more selective fishing gear that avoids catching unwanted species.

The Unfulfilled Promise of the World’s Marine Protected Areas

Biologists and conservationists maintain that establishing marine reserves offers the best hope for recovery for our overstressed oceans, Bruce Barcott writes. So why is such a small area of the world’s oceans protected?READ MORE

Another challenge is to coordinate enforcement of the new fisheries laws, which is largely carried out by member states. “If the decisions are not followed up on a member-state level, all the ambitious targets were in vain,” says Greenpeace campaigner Thilo Maack. He wants countries that don’t follow the new rules to be harshly punished and excluded from the European Maritime and Fisheries Fund, which doles out subsidies. Experts say that a sizeable number of vessels will need to be scrapped.

Finally, Damanaki and the EU Parliament want to make sure that tougher laws in the EU don’t exacerbate an already destructive trend — European vessels grossly overfishing waters in the developing world, as has been happening off of Africa.

Conservationists are generally optimistic that Damanaki and her allies can, at last, fix Europe’s badly broken fisheries system. Biologist Rainer Froese said numerous fights lie ahead, but that “it will not be an uphill battle anymore, as it was in the past.”