In Puget Sound, one of America’s great estuaries, killer whales, seals, and schools of salmon swim not far from more than 3 million people who live in the Seattle region. The presence of such impressive marine life, however, belies the fact that the sound is seriously polluted.

When it rains, storm water washes into the same system of underground pipes that carries the region’s sewage, and 1 billion gallons a year overflow into the sound when area sewer systems contain more water than can be treated. In addition, motor oil, lawn chemicals, PCBs, heavy metals, pet waste, and many other substances run unabated into the sound, both through the storm water pipes and from roads and other shoreline structures. “The biggest threat to Puget Sound is non-point sources [of pollution],” says Nancy Ahern, Seattle Public Utilities deputy director.

Blowhole samples taken from killer whales have revealed fungi, viruses and bacteria living in their respiratory tracts, some of them antibiotic-resistant and once found only on land. Health officials often have to shut down oyster beds because of fecal contamination. Salmon in streams are killed by

Green infrastructure harnesses natural processes to carry out the functions of built systems.

To lessen this deluge of diffuse pollution — a problem faced by many regions worldwide — Seattle is looking not at new and expensive sewage treatment infrastructure. Instead it is embracing an innovative solution to storm water runoff called green infrastructure, which experts increasingly say is not only the most cost-effective way to deal with such a large-scale problem, but also offers a range of other benefits. A growing number of places, from New York City to Sweden, are investing in everything from rooftop gardens to pollution-filtering assemblages of trees to reduce tainted runoff.

Gray infrastructure is the system of pipes and ditches that channel storm water. Green infrastructure is the harnessing of the natural processes of trees and other vegetation — so-called ecosystem services — to carry out the functions of the built systems. Green infrastructure often intercepts the water before it can run into streets and become polluted and stores the water for gradual release through percolation or evapotranspiration. Trees also clean dirty water through natural filtering functions.

Advocates say green infrastructure isn’t just about being green — it makes financial sense, as well. Its cost-effectiveness depends on how benefits are assigned and valued, and over how long a time scale, but green has been shown to be cheaper than gray. 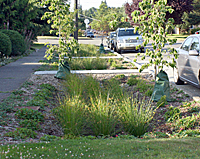 Seattle Public Utilities
The Ballard Roadside Rain Gardens are one of many projects in the Seattle area designed to reduce runoff.
A 2012 study by American Rivers, ECONorthwest, and other groups examined 479 projects around the country. About a quarter of the projects were more expensive, they concluded, and 31 percent cost the same; more than 44 percent brought the costs down, in some cases substantially. New York City, for example, expects to save $1.5 billion over the next 20 years by using green infrastructure.

The concept of green infrastructure is hardly new. New York City has long preserved watersheds in the Catskills Mountains and Hudson Valley for the city’s drinking water supplies. Since the 1990s, in order to comply with federal regulations, New York City has committed $1.5 billion dollars for protection of the forests that blanket much of the Catskills rather than build and operate a water filtration and purification plant costing $10 billion.

“We’re at a tipping point,” says Katherine Baer of American Rivers, which is working with communities to implement green infrastructure. “We’re going to see a lot more of these practices that protect, restore or replicate natural functions, as cities grapple not only with water quality, but with livability and climate adaptation.”

Seattle is one of the early adopters of this new approach, which can begin with preserving existing wetlands critical to cleaning water and storing runoff. Seattle also asks residents, for example, to install “rain gardens” —

‘We’re going to see a lot more of these practices as cities grapple with water quality and livability.’

native plants in special soil mixes designed to hold water and allow it to percolate into the ground. “They are a lot like sponges to keep water from flowing onto streets and sidewalks” with silt and pollutants, says Baer. Seattle homeowners are eligible for reimbursement for their rain garden costs, which average $3,000 to $4,000. Seattleites also are being urged to disconnect their downspouts from storm drains and to re-direct the water from their roofs for gardens or lawns, or to store it in cisterns or rain barrels.

The Puget Sound city of Coupeville, Washington is experimenting with the use of trees and other plants to clean water — known as phyto-remediation — to scrub runoff from a large parking lot and housing development. The water flows first through a bio-swale, which is essentially a drainage ditch with gently sloping sides and rip rap and vegetation that catches silt and sediment. The water flows to a depression, 250 feet by 35 feet, planted densely with poplar and willow trees designed to capture and hold thousands of gallons of runoff a day.

“Every drop of water passes within an inch of the roots and the root zone reactor cleans it,” said Lou Licht, president of Ecolotree, the company that installed the system. Thanks to a dense community of microbes that live around their roots — the so-called root zone reactor — trees neutralize the nastiest waste coming off streets, including ammonia, nitrates, and the copper from brake linings. Once the roots work their magic, the water is released for irrigation.

Copper, it turns out, is a big problem in the Puget Sound region. As people brake their cars, fine copper dust is emitted and washes into streams. In some streams, 90 percent of coho salmon returning to spawn have been wiped out, in part because of high copper levels from brakes and other sources; the copper can harm a salmon’s sense of smell, interfering with its ability to navigate back to natal streams or detect predators. But, says Licht, copper is an essential nutrient for trees, whose roots and hummus can absorb large quantities of the element. 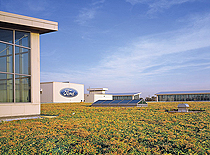 Green Roofs for Healthy Cities
At 10.4-acres, the roof atop the Ford Dearborn Truck Assembly Plant in Michigan is the world’s largest green roof.
Green roofs, long used in Europe, are another tool being rapidly adopted in North America. Toronto is the first city in North America to require green roofs on new commercial construction. The largest green roof in the world is the 10.4-acre Ford Dearborn Truck Assembly Plant in Michigan, a living rooftop prairie with seven species of grass and flowers that attract butterflies and hummingbirds. Ford officials say the roof, part of a 600-acre green storm water treatment system at the facility, cost $15 million and eliminated the need for a $50 million water treatment facility. The roof also reduces heat and cooling needs by 5 percent.

Another green infrastructure tool is permeable pavement, which is made of materials that allow water to soak through into the ground instead of running off. In Chicago the city is modifying its urban alleys with permeable pavement and with “cool” pavement that reduces temperatures. One limitation is that permeable pavement can’t be used for regular streets because plowing and sanding damage it.

While green infrastructure is most often thought of as a way to deal with storm water runoff, many urban managers and environmentalists take a more expansive view. “People are recognizing the multiple benefits,” says Baer. “Trees and forests and greening reduce the temperatures in the urban heat island. The other is an improvement in air quality — greenery absorbs pollutants.”

Edmonston, Maryland is a good example of the multiple benefits of green infrastructure. The city uses rain gardens along Decatur Street, its main thoroughfare, to keep 62 percent of the runoff from the Anacostia River and permeable pavement to divert another 28 percent — an example of what is known as “living streets.” “We also wanted to improve the

A rooftop garden holds as much as 70 percent of a one-inch rainstorm and slowly releases it via evaporation.

Stuttgart, Germany, realizing that the city’s heat island effect was contributing to badly polluted air in summer, analyzed weather patterns and enacted a plan to restore “wind paths” to encourage breezes from the surrounding hills to naturally clean and air condition the city. That means prohibiting new buildings that block these streams of fresh air, protecting existing green space, and creating open areas.

In New York City, Tyler Caruso and Eric Facteau head up a project called Seeing Green, which studies the impacts that the rapidly growing phenomenon of urban farming can have beyond producing food, especially its water management role. Instead of washing off rooftops, water is used to grow crops. A rooftop farm holds as much as 70 percent of a one-inch rain storm, said Caruso, and slowly releases it through evapo-transpiration, which compares favorably to traditional green roofs.

The natural filtering ability of trees and plants has led to some innovative uses. In the prosperous farming town of Enkoping in central Sweden, sewage sludge used to flow through a sewage treatment plant. But in recent years the city has turned to phyto-remediation. Sewage containing high levels of nitrogen is pumped onto about 190 acres of coppiced willows, which filter out pollutants. Then the willows are harvested, chipped into small pieces, and used as a biofuel to generate electricity.

While large cities such as Seattle, Milwaukee and Philadelphia have adopted rain gardens, green roofs, and other aspects of green infrastructure, it’s still a young field and much about the approach is untested and evolving. “This is really technology on the move,” says Weinstein. “Five years ago there weren’t any green roofs. Now they are all over the place.”

Green Roofs are Starting To Sprout in American Cities

Long a proven technology in Europe, green roofs are becoming increasingly common in U.S. cities, with major initiatives in Chicago, Portland, and Washington, D.C. While initially more expensive than standard coverings, green roofs offer some major environmental — and economic — benefits.READ MORE
That means that, in some cases it’s not known how well these technologies will work over time. And one of the biggest hurdles to more widespread implementation is from regulatory agencies, which have a hard time reconciling the new approach with existing regulations. “It takes years to change codes and allow new technologies,” Weinstein said.

In spite of the hurdles, experts say, green infrastructure is likely to take off, not only in the U.S. but across the world. “It pretty much has to,” Weinstein says. In the U.S., “more than a thousand communities have [sewage overflow] problems. We have tons of urban areas and the infrastructure is at the end of its lifecycle.” And because of the cost, he said, “You can’t do it conventionally. We need new tools.”