In 2011, Enviva — the United States’ largest exporter of wood pellets — opened its flagship pellet-manufacturing mill in Ahoskie, North Carolina. The plant annually converts 850,000 tons of trees and waste wood into tiny pellets that are shipped to Europe and burned in power plants for what is being touted as a renewable form of electricity. 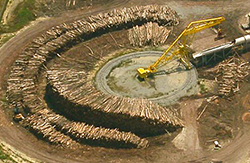 Two years later, Enviva opened another mill 50 miles away in Northampton County, North Carolina, and by 2016 the company is expected to operate eight wood pellet mills from Virginia to Mississippi. Elsewhere in the southeastern United States, other companies are planning or rapidly building facilities to produce wood pellets. A mill planned by Biomass Power Louisiana in Natchitoches, La., will produce up to 2 million tons of the pellets annually. Drax, a British utility that’s taking steps to transform itself into a predominately biomass energy generator, has said it will open four of its own large mills to produce pellets in Mississippi, South Carolina, and Louisiana.

Demand for this purportedly green form of energy is so robust that wood pellet exports from the United States nearly doubled from 2012 to 2013 and are expected to nearly double again to 5.7 million tons in 2015. This soaring production is driven by growing demand in the U.K. and Europe, which are using wood pellets to replace coal for electricity generation and heating. The European Union’s 2020 climate and energy program classifies wood pellets as a carbon-neutral form of renewable energy, and European companies have invested billions to convert coal plants to plants that can burn wood pellets.

But as wood pellet manufacturing booms in the southeastern U.S., scientists and environmental groups are raising significant questions about just how green burning wood pellets really is. The wood pellet industry says that it overwhelmingly uses tree branches and other waste wood to manufacture pellets, making them a carbon-neutral form of energy. But many environmentalists and scientists believe current industry practices are anything but carbon-neutral and threaten some of the last remaining diverse ecosystems in the southeastern U.S., including the Roanoke River watershed surrounding the Ahoskie, N.C., plant and longleaf pine ecosystems near the large Enviva wood pellet mill in Cottondale, Fla.

Critics contend that Enviva and other pellet manufacturers frequently harvest whole trees — including hardwoods from bottomland areas — that can take a long time to regrow, thus making the burning of wood pellets an overall source of CO2 emissions.

“They are cutting them down and burning them to produce energy in Europe — a practice that both degrades critical forest habitat and increases carbon emissions for many decades to come,” says Debbie Hammel, a senior resource specialist with the Natural Resources Defense Council (NRDC).

Less than a year after Enviva’s Ahoskie plant opened, the NRDC began monitoring how the facility was impacting nearby forests and what kinds of trees were being used to produce pellets. As the demand for wood to manufacture more pellets increased, the NRDC noticed forested wetlands in the Roanoke watershed begin to disappear.

“A significant portion of the wood source Enviva uses comes from natural hardwood forests,” says Hammel, noting that logging in such forested wetlands and bottomlands creates major ecological impacts, including threatening species such as wood storks and the cerulean warbler. In the opinion of Hammel and others, burning wood pellet biomass to produce electricity is far more harmful to the environment and the climate than renewable energy sources such as solar and wind power.

Industry officials say, however, that manufacturing and burning wood pellets is an important part of the mix of renewable energy options. Seth Ginther, executive director of the United States Industrial Pellet Association, says that wood pellets are a “low-cost, low-carbon alternative” to coal. In addition, he says, wood biomass is lower in sulfur, nitrogen, ash, chlorine, and other chemicals than coal and traditional fossil fuels.

Wood pellet producers are using waste wood and low-grade wood fiber in many instances, according to Ginther. This niche market is enabling some landowners to keep growing and planting trees, rather than chopping down woodlands for commercial development or agriculture. “Our industry helps encourage forest owners to reforest and replant so this market helps keep working forests working,” Ginther says.

Burning wood pellets releases as much or even more carbon dioxide per unit than burning coal.

Ginther says that the U.S.’s wood pellet industry can expect even more robust growth if the Asian commercial market or European residential market embraces the combustion of wood biomass. “The U.S. has established itself as a sustainable source of fiber for bioenergy, and we are very proud of the fact that so many European customers are looking to U.S. producers for sourcing needs,” Ginther says.

The wood pellet industry really took off in 2012, after the U.K.’s Department of Energy and Climate Change published guidelines on the direction of British renewable energy policy for the near future. The guidelines encouraged utilities to convert coal-fired generators to generators using wood biomass and gave utility companies the option to burn wood pellets to help them meet European Union air pollution and renewable energy standards. Power companies then began to turn to the southeastern United States, where logging is well-established and much less restricted than in Europe, as the primary supplier of wood pellets.

“It is the EU that has prompted this industry explosion,” Hammel says. 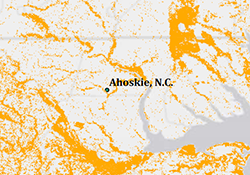 Some scientists say there are still more questions than answers when it comes to commercially burning wood pellets for energy, and it’s largely a matter of carbon cycle calculations. Bob Abt, a professor of natural resource economics and management at North Carolina State University, says a lot depends on the origin and type of trees used to feed the pellet mills.

Burning wood pellets releases as much or even more carbon dioxide per unit of energy as burning coal, so in order for burning pellets to be carbon-neutral the carbon emitted into the atmosphere has to be recaptured in regenerated forests, Abt says. Residual wood, such as tree thinnings and unused tree parts left over at timber mills, is the best material for wood pellets, says Abt. But he and others say that not enough of such waste wood exists to feed the growing demand for wood pellets.

So the industry has turned to whole trees.

Softwood trees such as loblolly pines grown on managed plantations can be planted and regrown relatively quickly after harvesting, and selective removal of some trees may occur in as little as 12 years. When softwood is used, carbon released during the burning of wood pellets for electricity production can then be sequestered and stored in the new trees.

But using hardwood trees from bottomlands results in a different carbon calculation, Abt says. Using these species of trees requires a much longer time to make up for the released carbon, as bottomland hardwoods grow more slowly. Abt also points out that floodplain forests, which are typically owned by smaller, private owners, tend not to be certified to adhere to sustainability standards. Regeneration in bottomlands also tends to be more variable and depends on local hydrological conditions.

When a mill consumes nearly a million tons of wood a year, it’s difficult to track where every single tree comes from, according to Abt and other experts.

But Forisk, a consulting company that tracks forest industry trends, calculates that the majority of the wood used at Enviva’s Ahoskie, N.C., mill comes from hardwood trees — including those typically found in wetland forests.

Generally, wood pellet mills in North Carolina and Virginia are more reliant on these slower-to-regrow hardwoods, while mills in Georgia, for instance, mainly utilize plantation pines, Abt says. These two different classes of trees are “on different ends of the spectrum” when it comes to both forestry management and how much carbon is released and sequestered, he notes.

More than 168,000 acres of forest are at risk of being cut down for producing wood pellets for one facility.

If the timber industry in the southern U.S. gathers up all the branches, roots, and other tree waste and uses that wood to make pellets, William Schlesinger, who is president emeritus of the Cary Institute of Ecosystem Studies and a biogeochemist who studies carbon cycles, wouldn’t have a problem with it.

The problem, he says, is when pellets are made from virgin growth and second-growth hardwoods.

“The best evidence we have is that not all the pellets are coming from wood waste, and that creates a carbon deficit,” says Schlesinger, who was one of the scientists who wrote a letter to the Environmental Protection Agency calling on the agency to create strong pollution standards for biomass energy. Schlesinger points to aerial photos distributed by the Southern Environmental Law Center showing large-diameter oak and hickory trees felled for wood pellet production at Enviva’s Ahoskie mill.

A study of the Ahoskie plant commissioned by the Southern Environmental Law Center and National Wildlife Federation found that more than 50 percent of the likely sourcing area for the Ahoskie facility is forested wetlands. More than 168,000 acres of wetland forest are at high risk of being cut down for manufacturing wood pellets at this single plant, the study said.

Research shows that biochar made from plant fodder and even chicken manure can be used to scrub mercury from power plant emissions and clean up polluted soil. The big question is whether biochar can be produced on a sufficiently large scale to slow or reverse global warming.READ MORE

The NRDC is currently undertaking a study using GPS data to map hotspots where wood pellet facilities throughout the southeastern United States are having the biggest impacts. The group plans to publish the study this spring, highlighting logging around wood pellet manufacturing facilities.

Schlesinger says recent calculations using U.S. Energy Information Administration (EIA) and International Energy Agency (IEA) data show that burning wood pellets results in major impacts on forests for very modest quantities of bioenergy. For instance, the IEA projects that to produce 6.4 percent of global electricity from burning wood biomass in 2035, the global commercial tree harvest — all trees felled except for traditional firewood — would have to increase by 137 percent.

It’s not just European utilities that may end up burning wood pellets on an industrial scale. Hammel, of NRDC, notes the possibility of a significant shift to burning wood commercially here in the United States, depending on how the U.S. Environmental Protection Agency decides to count greenhouse emissions from power plants that burn biomass.

“It would be a mistake for the EPA to give biomass energy producers a free pass on carbon accountability,” Hammel says. “Cutting down and burning trees for energy is a step in the wrong direction for the climate and our forests.”