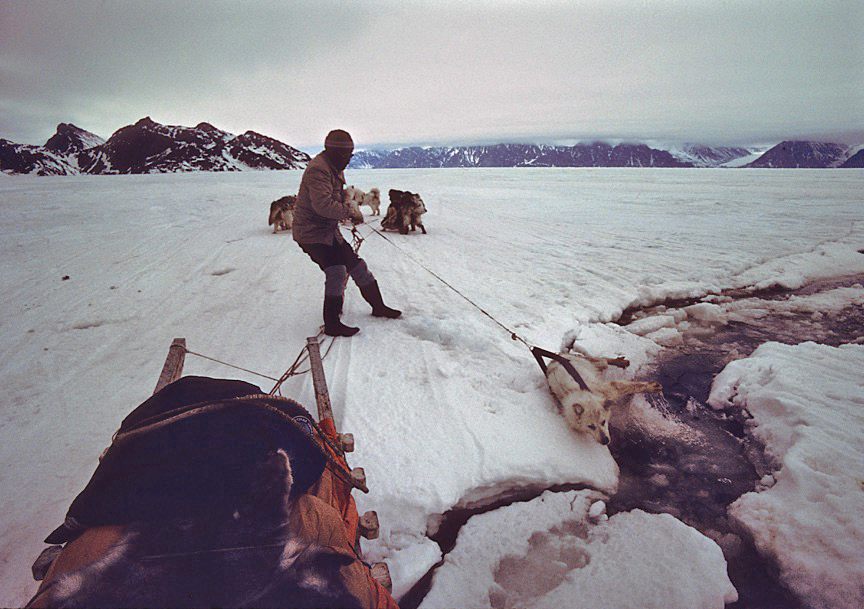 An Inuit hunter pulls one of his dogs from a crack in the ice. ED STRUZIK

The decades-long trend of extreme Arctic warming hit new heights this winter, as a mass of exceptionally warm air invaded the region, raising temperatures by almost 50 degrees Fahrenheit above average in some areas and driving temperatures above the freezing mark at the North Pole in late December. Arctic Ocean ice cover reached a new record winter low last month, putting even more stress on sea-ice-dependent seals and polar bears. Other wildlife populations, including caribou and some seabirds, are declining as species struggle to adapt to a swiftly changing polar ecosystem.

All these changes are also making it more difficult for Arctic people to put food on the table. The big Arctic melt is having a profoundly negative impact on many indigenous hunters, who for millennia have relied on the pursuit of whales, seals, fish, and land mammals such as caribou to feed their families. Even today, in an era of greater government support of far northern Native communities, indigenous people across the Arctic — from the Inuit of Canada and Greenland to the Yupik and Dene of Alaska — still depend heavily on subsistence hunting.

Now, as sea ice becomes an increasingly unreliable hunting platform and soaring temperatures alter the life cycles and abundance of prey species, some indigenous communities are facing worsening food shortages and a lack of proper nutrition. Last year, the U.S. government had to ship in frozen fish to Alaska communities whose walrus hunts had failed.

More than one-third of households in the vast Arctic territory of Nunavut lack access to safe and healthy food.

In northern Greenland, where hunters often use sled dogs, some owners have been forced to kill the animals because it is too costly to continue feeding them given the paucity of prey on their hunts.

According to several recent Canadian studies, one-third to two-thirds of the households in the vast Arctic territory of Nunavut lack access to safe and healthy food. In some places in northern Quebec, soup kitchens are having trouble keeping up with the demand, and food scarcity has been linked to the slow growth of many Inuit children.

Food shortages have always been a challenge for the Inuit and other aboriginal people in the Arctic, as dependence on subsistence hunting and fishing has meant that life is often lived on the edge. Engaging in a rugged life on the land and sea also has been problematic for a new generation of Inuit who tend to identify more with southern cultural values than the ones their parents and grandparents held.

The current food shortages, however, are something quite different, because along with skyrocketing food prices — milk often costs $15 a gallon and steak more than $25 a pound — climate change has made subsistence hunting less reliable and more dangerous. Once-stable sea ice is now breaking apart under the feet of indigenous hunters and their sled dog teams.

“In the 1980s, we could expect three to five feet of ice in early March,” says Inupiaq elder Austin Swan, 68, who lives in the small community of Kivalina on the north slope of Alaska. “Today [in mid-March], we have open water in some places and very thin sea ice elsewhere. Weeks of minus-40 weather seem to never come, as they did in the 1980s.” He says the decline in sea ice makes it difficult to hunt bearded seals and almost impossible to hunt beluga and bowheads. 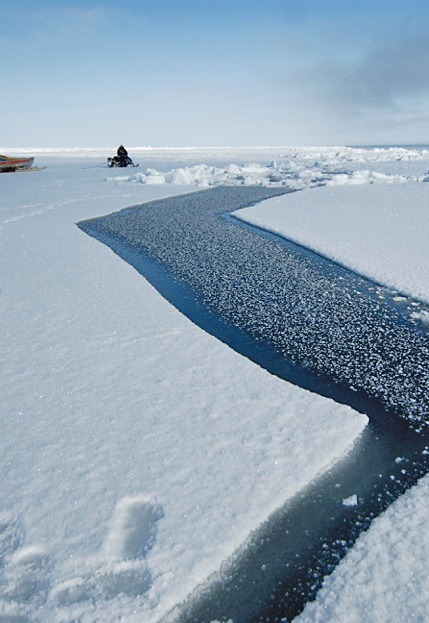 Inuit hunters are traveling longer distances to get around open water. ED STRUZIK

Swan is one of 146 Alaskans representing 81 villages who contributed to a report on food security published by the Alaska Chapter of the Inuit Circumpolar Council (ICC) in December. In addition to citing climate change, rising fuel and food prices, and resource development as causes of the problem, the report calls for a complete reevaluation of how wildlife and resources are managed in the Arctic during a time of rapid change. This reassessment would involve an examination, for example, of how oil, gas, and mineral development might negatively impact caribou herds.

Arctic food security, or “insecurity” as some call it, became a hot-button issue in 2012 when Olivier De Schutter, the United Nations’ Right-to-Food envoy, publicly criticized the Canadian government for failing to address the growing problem of hunger among the Inuit and indigenous people of Canada. At the time, Leona Aglukkaq, the Inuit minister in charge of Canada’s Environment Department for the ruling Conservative Party, dismissed De Schutter’s criticism, insisting that the Inuit were doing well feeding themselves with food they harvested from the land and the sea.

This controversy inspired the Canadian Council of Academies — an independent group that supports scientific research — to study the issue. In 2014, the 15 experts who contributed to the report sided with the UN envoy.

“A significant body of research has confirmed that access to wild foods can help in significant ways to mitigate conditions of indigenous food insecurity,” David Natcher, senior research chair with the Global Institute for Food Security at the University of Saskatchewan and a contributor to the report, said in an email interview. “Climate change is just one of a number of factors that make it difficult for the Inuit and other Northern indigenous people to put food on the table. But it’s a big one that’s going to get a lot worse.

“Changing ice conditions have increased the time and cost of harvesting. Changing environmental conditions have also made it more difficult for Inuit elders to share their predictive knowledge of the weather. This has contributed to growing uncertainty among younger harvesters to access the land, sea, and ice. There was no doubt in our mind that this is having a direct bearing on indigenous food security in northern Canada.”

The implication of all this came into sharp focus in 2013 when then-Alaska Governor Sean Parnell declared two Inuit communities — Gambell and Savoonga — economic disaster areas after changing weather patterns in the Bering Sea forced hunters to abort their annual bowhead whale and walrus hunts. The disaster declaration opened the region to state assistance funds.

The state did not fly in food, but the following year the communities did need emergency food assistance. After a second year of low sea ice led to another failure of the walrus hunt, Vera Metcalf, director of the Eskimo Walrus Commission, asked for help. The U.S. Coast Guard shipped in 10,000 pounds of halibut to the communities of Gambell, Savoonga, Diomede, and Wales. The halibut was supplied by SeaShare, a Washington state-based food bank that specializes in providing seafood to communities in need.

Speaking of his own Alaskan community of Kivalina, Swan said, “Most people here are related, so they share as much as they can, just as they did in the old days. But sooner or later, it’s not going to be enough, if this continues. Welfare checks help, but they are not the answer.”

Carolina Behe, indigenous knowledge and science adviser for ICC-Alaska, says that climate change and food security are more than just a matter of calories and nutrition; they’re also a matter of culture. “People here are identified by their ability to hunt and provide food for those who need it,” she says. “This identity is threatened when it becomes unsafe to go out on the ice to hunt, or too expensive to travel the long distances that are now needed to track down animals on land.”

Many Inuit leaders were heartened by this month’s joint pledge by U.S. President Barack Obama and Canadian Prime Minister Justin Trudeau to protect the Arctic from overfishing, shipping, resource development, and the impacts of climate change.

“People here are identified by their ability to hunt and provide food for those who need it,” says one indigenous leader.

But ICC president Jim Stotts is dismayed that the Inuit were not consulted beforehand about the agreement between the two leaders.

“The attention to the Arctic and issues that matter to Inuit is appreciated,” he says. “But the United States Arctic policy requires consultation with Inuit. Moving forward, we must be meaningfully engaged in decisions that affect us.”

Indigenous leaders in Nunavut were outraged recently when a Canadian regulatory review board gave the green light to two mining companies that want to drill for minerals on the calving grounds of the Bathurst caribou herd, which straddles the border between Nunavut and the Northwest Territories.

Like many of the world’s 24 major migrating caribou herds, the Bathurst herd is not faring well. In 1986, scientists estimated there were as many as 450,000 animals in the herd. Today, there are roughly 20,000.

A growing number of roads, pipelines, and mines threaten to destroy caribou habitat and interfere with migration. But global warming is taking a heavy toll on the animals. More biting flies and parasites, for example, sap the caribou’s energy reserves.

ALSO FROM YALE e360Oil Drilling in Arctic Ocean: A Push into Uncharted Waters 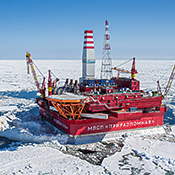 As the U.S. and Russia take the first steps to drill for oil and gas in the Arctic Ocean, experts say the harsh climate, icy seas, and lack of infrastructure means a sizeable oil spill would be very difficult to clean up and could cause extensive environmental damage. READ MORE

More frequent winter rains and sleet freeze snow cover and make it harder for caribou to paw up nutritious lichen below. Earlier spring blooms no longer coincide with the birth of animals on the Arctic coast.

Aboriginal hunters in Nunavut and the Northwest Territories are angry that they have been banned from hunting Bathurst caribou, even as potentially harmful mining activities in the herd’s territory are being approved. Inuit and Dene hunters are struggling with, and in some cases vowing to defy, hunting bans in their territories.

“There is this impression in government and in some circles that jobs, jobs, jobs will fuel the economy,” says Ross Thompson, the executive director of the Beverly Qamanirjuaq Caribou Management Board, which helps manage two caribou herds that migrate across Manitoba, Saskatchewan, the Northwest Territories, and Nunavut. “What they don’t realize is that in many communities the caribou are the economy.”

Some economists agree. One 2008 study, which was updated in 2013, pinned the economic value of the Beverly Qamanirjuaq caribou herds at $20 million annually. To each hunter in Nunavut, one caribou was worth $1,720 in income, the study said. To replace that caribou with high grade beef, the study stated, would cost hunters three to five times more.

Swan is hopeful that governments will finally appreciate what climate change and resource development are doing to fish and wildlife in the Arctic and to villages such as his, which are sliding into the sea due to melting sea ice, rising sea levels, and thawing permafrost.

“We’ve always been able to adapt to natural change in the environment,” he says. “But what’s happening up here now is not natural. It’s making it difficult to put food on the table.”