For a melodrama of persecuted fugitives to rival Les Misérables, look no farther than the Mexican wolf, the subspecies of gray wolf that once populated the U.S. Southwest. Hunted and trapped by ranchers and federal agencies since the late 1800s, now detained by the same agencies in pens called “wolf jail,” few species in North America have come closer to extinction. Fewer still have suffered through attempted recoveries so plagued by reversals and allegations of mismanagement.

Like Jean Valjean (#24601), they are known by their numbers. Extirpated in the U.S. and nearly gone in Mexico by the 1970s, the wolves became the focus of a captive breeding program launched by 1980 with a handful of individuals, some interrelated. In 1998, the U.S. Fish & Wildlife Service — the lead agency responsible for the wolves’ recovery — reintroduced the first of 11 in the wild. That January, alpha female #174 from the Campbell Blue pack was carried into a snowy stretch of the Blue Range mountains of eastern Arizona and her cage door opened by U.S. Interior Secretary Bruce Babbitt. By August, she was dead, shot with a high-powered rifle by an unknown killer. Her companions were slain, disappeared, or removed by wildlife officials for leaving the recovery area, a violation of conditions of their parole. 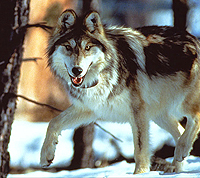 Arizona Game and Fish Department
A female Mexican wolf paces in a pen before her release into the wild.

Since that time, many scientists and conservationists contend, the Mexican wolf recovery in the wild has been a failure. Even the Fish & Wildlife Service deemed the population “at risk of failure” in its 2010 assessment of the program. The recovery has been shadowed by accusations that U.S. officials have shied away from their obligation under the Endangered Species Act to fully protect Mexican wolves because of vehement opposition from western states. A successful breeding program now maintains several hundred in captivity, but only 58 survive in the wild, a marked contrast to the more than 1,700 gray wolves that have repopulated the northern Rocky Mountains after widely publicized reintroduction efforts.

The main reason for the faltering Mexican wolf program is a set of rules — negotiated between the federal government and the states — more restrictive than those governing any other endangered species reintroduction. The Mexican wolves in this “nonessential experimental” population may only be freed inside a small patch of Arizona, although much of the recovery area lies in New Mexico; those preying on cattle can be removed or legally killed; those straying outside must be trapped and brought back, subverting natural behavior and dispersal. In the temperate Southwest, they are surrounded year-round by cattle, an ever-present temptation, unlike gray wolves to the north, where severe winters limit grazing to a few months.

While defending the program as a success, Fish & Wildlife Service officials have recently expressed frustration with those restrictive rules. Tom Buckley, the agency’s spokesman in the southwest, pointed out that “second and third-generation animals [are] living and breathing in the wild” and called the program “pretty successful.” But he notes that the release area is “full of wolves” with established territories, making future releases hazardous for newcomers and halting progress.

Biologists and geneticists are incensed over what they see as political and bureaucratic interference.

So it was all the more surprising earlier this month, many experts say, when the agency opted for the staus quo and denied a request to classify the Mexican wolf, Canis lupus baileyi, as a subspecies of the gray wolf, Canis lupus. The protection already enjoyed by the wolf, the agency claimed, had raised its numbers “from none… to 58.” Sherry Barrett, Mexican wolf recovery coordinator, echoed that assessment, arguing that “It’s a big success when you started from no animals in the wild.” But scientists and environmental groups argue that a subspecies listing is essential for a robust recovery, as it would require a new recovery plan and the identification of “critical habitat,” which might extend into the neighboring states of Colorado and Utah.

Biologists and geneticists summoned by the agency to revise the Mexican wolf’s 30-year-old recovery plan have grown incensed over what they see as political and bureaucratic interference. Their fears — that the Fish & Wildlife Service is allowing states to hijack the scientific process — are the basis of a formal complaint of “Scientific and Scholarly Misconduct” filed in June with the U.S. Interior Department, charging that the federal Mexican wolf recovery program has become “the antithesis of scientific integrity.”

The whistleblower organization behind this J’accuse is Public Employees for Environmental Responsibility (PEER), which has harried the agency over the Endangered Species Act since the Clinton years. In 14 single-spaced pages, PEER’s complaint also assails the agency’s National Wolf Strategy, including the controversial, congressionally mandated decision to remove the gray wolf in the northern Rockies from the endandered species list. PEER claims Fish & Wildlife’s decisions have lacked public transparency and review by independent scientists, violating the Obama administration’s promise to honor the best available science. 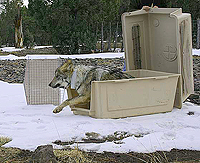 PEER has taken up the cause of scientists who recognize that the lobo is the most genetically distinct of all remaining wolf subspecies, a Pleistocene relict of the first wave of wolves to colonize the continent. The Mexican wolf is an irreplaceable fixture of the modern-day restorationist’s fondest dream — that a Noah’s Ark of wolf, jaguar, and the Bolson tortoise may one day revive ecosystems in the Southwest degraded by centuries of overgrazing and development. Since the 1990s, expert panels of wolf biologists commissioned by the Fish & Wildlife Service have consistently advised the agency to follow the science: Modify restrictive rules that require constant trapping and relocating of the wolves, release them in Arizona and New Mexico, and establish several wild populations so that the existing one cannot be wiped out by disease, fire, or other threats.

The agency has consistently declined to do so, dismissing previous panels tasked with revising the recovery plan. Philip Hedrick, an Arizona State University genetics expert who served on those panels, has grown increasingly alarmed by the agency’s failure to act, saying delays erode dwindling chances for “genetic rescue.” Says Hedrick, “The long-term and even the short-term survival of the wild population is in jeopardy.”

Over the years, pups and entire wolf packs have been lethally “removed” or taken into custody following livestock losses by public lands ranchers, who lease forest allotments for cattle grazing. Among them was Mule Pack alpha female #189, who lost a leg to frostbite while caught in a trap. Re-released, she survived on three legs until she disappeared. Overall, the Fish & Wildlife Service has removed more wolves (153) than it has released (92). Nearly half the 88 reported deaths have been caused by illegal shooting, while rural communities have complained ceaselessly of threats to livestock and pets.

The Mexican wolf reinstroduction program has played out on a remote stage, the rugged, juniper-covered canyons, grassy meadows, and heights studded with ponderosa pines of the “Blue Range Wolf Recovery Area” on the border between Arizona and New Mexico. To reach it from Albuquerque requires hours of driving, crossing the Continental Divide, passing through the desolate Plains of San Agustin and its strange spectacle of the Expanded Very Large Array, enormous dish antennas trained on black holes. Spotting the elusive creature is nearly as difficult. Smaller than the gray wolf, the lobo is cryptically colored in browns and grays, and its numbers have remained tiny and its movements tightly controlled.

It took until 2010 for a Fish & Wildlife Service assessment to acknowledge that Mexican wolves were “not thriving.” At that point Benjamin Tuggle, director of the service’s Southwest region, summoned a new recovery team. Its science panel was charged with updating the recovery plan “consistent with the best available scientific information.” That year, Obama’s Interior Department adopted a policy demanding “clear and unambiguous… use of science in decision making.”

Scientists began preparing a confidential plan, proposing three populations of at least 250 animals connected by corridors, standard practice in recovering endangered species. Among suitable habitats, the plan identified areas encompassing the north rim of the Grand Canyon and border regions of Arizona and Utah, as well as New Mexico and southern Colorado. That draft document was leaked last fall by state game officials, igniting ferocious opposition from hunters’ groups and prompting an angry letter from the Utah governor to Interior Secretary Ken Salazar. In an op-ed, U.S Senator Orrin Hatch stated that Mexican wolves “do not belong in Utah” and decried the “environmental extremists” who would put them there.

The science panel nonetheless carried on, completing a longer draft plan by May. PEER’s June complaint quoted Fish & Wildlife Service emails in its contention that federal officials tried to improperly influence the plan’s proposals for wolf numbers and potential habitat, with Tuggle’s staff requesting a range of numbers instead of the “3 x 250” recommendations: “You should not feel undo [sic] pressure at this point to accommodate, per se, but you should recognize that this is his way of telling you what information he would like to see.”

Furthermore, the complaint argued that the broader National Wolf Strategy paid more attention to state opposition and “political concerns” than to science, proposing recovery efforts only for states without objections, arguably a violation of the law. In June, the American Society of Mammalogists warned the Fish & Wildlife Service that further delays in reintroducing Mexican wolves will cause “irreparable harm,” as captive wolves grow older and genetic opportunities are lost. By September, the FWS had investigated and exonerated itself, finding the complaint “not warranted.”

Michael Robinson, conservation advocate with the Center for Biological Diversity — one of the groups seeking to have the Mexican wolf declared a subspecies — accused Fish & Wildlife Service officials of “congratulating themselves on releasing wolves and not shooting every one of them.” Robinson called the handling of the program “one of the more spectacular” examples of the agency’s mismanagement, pointing out that its own projections had called for 102 wolves and 18 breeding pairs in the wild by 2006. The refusal of a subspecies listing was political, he said, noting Colorado’s importance as a swing state in the upcoming election.

In the midst of this heated debate, the Fish & Wildlife Service announced in August that it would “lethally control” another wolf for killing cattle. She was the Fox Mountain alpha female, caring for four pups. After wolf advocates protested to the White House and legislators, she was granted a reprieve, with plans made to place her in captivity. She eluded authorities until Oct. 10, when she was caught in a federal trap. A local conservation center has agreed to keep her for the rest of her life.