Africa is often portrayed as a victim of climate change, a continent that emits little carbon yet stands to suffer the effects of the developed world’s pollution. This view only holds if one excludes South Africa, the continent’s richest country and the world’s sixth-largest coal exporter, seventh-largest coal producer, and thirteenth-largest CO2 emitter, with per-capita emissions twice the global average. Ninety-four percent of the country’s electricity comes from coal, as does almost half its liquid transport fuel. 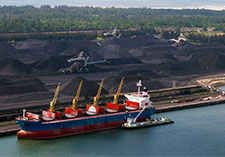 But South Africa is also blessed with abundant renewable energy resources, mainly in the form of plentiful wind and its famously bright sun. These were largely unharnessed for power generation until last year, when the government began inviting private investors to produce cleaner electricity for the national grid. Roughly $5.5 billion has since rushed into the country’s renewable energy sector, and dozens of wind farms and solar plants are now mushrooming across the landscape.

Despite the newfound interest in renewables, coal’s days in South Africa are far from over. The government plans to increase coal exports and the production of electricity from coal. Observers say this is because coal is seen as cheap, the industry has a long history of delivering reliable power, and influential people — including President Jacob Zuma’s son and some of his African National Congress (ANC) party’s funders — have financial interests in so-called “black gold.”

The state-owned utility is building the world’s third- and fourth-largest coal-fired power plants.

The state-owned rail utility is spending billions of dollars to upgrade coal export lines, and the state-owned electric utility, Eskom, is currently building the third- and fourth-largest coal-fired power plants in the world, 4,800-megawatt behemoths known as Medupi and Kusile. The president’s cabinet announced in August that it intends to follow them with another, possibly smaller plant provisionally named Coal 3.

Environmentalists are worried that the rail expansion and the construction of Coal 3 will lock South Africa into the unnecessary and harmful consumption and export of coal for decades to come. In addition to the climate implications, they fear for the region’s scarce water resources and agricultural land, which are already being polluted and torn up by mining companies on a massive scale.

The greens are not just up against coal, but against the whole of South Africa’s mining industry, which has shaped the country’s history more than any other force. First mined commercially 150 years ago, coal has been at the forefront of the exploitation of South Africa’s extraordinarily large and diverse mineral resources, including diamonds, gold, and platinum.

The coal industry grew significantly under the notorious apartheid regime, which came to power in 1948 and saw coal as the solution to the twin pressures of an energy-hungry post-World War II economy and international anti-apartheid sanctions. With no indigenous oil reserves, South Africa feared being cut off from imported crude, so the government invested heavily in coal-fired power plants and created a state-owned company, Sasol, to convert coal into liquid petroleum on an unprecedented scale.

Apartheid came to an end in 1994 with the election of Nelson Mandela and his African National Congress (ANC) to power. In 2007 South Africa hit an electricity supply wall. Power cuts plunged major cities into darkness and industries ground to a halt. Blaming the situation on a lack of generation capacity and an unreliable supply of coal to its existing power plants, Eskom began pulling mothballed plants into action and accelerated the commissioning of the mega-plants, Medupi and Kusile.

This has incensed environmentalists. While mining had been largely unconstrained by environmental laws throughout the apartheid era, the post-apartheid Constitution grants citizens the “right to an environment that is not harmful to their health and wellbeing” and obligates the government to pursue “ecologically sustainable development.” Dirty coal, they say, should be phased out, not encouraged. Its costs in terms of climate destabilization, water pollution, and lost agricultural land are becoming too high, environmentalists contend.

Coal 3, the proposed new plant, is a particularly bad idea, they say. It “doesn’t make sense economically or environmentally,” says Saliem Fakir of WWF-South Africa. “It only makes sense when you look at it in terms of vested interests and the politics of the whole southern African region.” 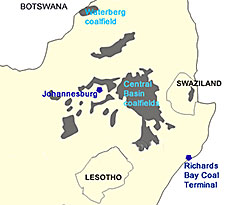 With its large coal deposits, South Africa is the world’s seventh-largest coal producer.

Coal 3 is likely to be built in the Waterberg coalfield that underlies a remote part Limpopo Province in northern South Africa, as well as part of neighboring Botswana (see map). Although the Waterberg is one of southern Africa’s largest known coal deposits, it has remained underexploited because its complex geology and lack of water and rail lines has made it less attractive to private investors than “easier” coalfields farther south.

The Coal 3 plant would change this by guaranteeing local markets for more Waterberg mines, says Fakir. In addition, associated heavy-haul rail lines will allow access to lucrative export markets, not just for the Waterberg mines but for new mines in adjacent Botswana, too. Fakir points out that supporters of South Africa’s ruling party hold coal rights in the region, and that landlocked Botswana’s government has long sought a route to the sea for its abundant but almost completely unexploited coal resources.

The South African coal industry is adept at navigating the country’s increasingly murky political waters. According to media reports, President Zuma’s son, Duduzane, and members of the Gupta family — some of the president’s wealthiest supporters — are connected to two companies, Idwala Coal and Tegeta Resources. The Sunday Times newspaper reports that Idwala admitted to the Department of Environmental Affairs that the company had illegally diverted a public road and a river, destroyed part of a wetland, and illegally discharged pollutants as part of its mining operations. Tegeta has been mining for two years without environmental authorization or a water use permit, according to the Afrikaans-language newspaper, Beeld. But there’s little official talk of prosecutions in these cases — the government instead has emphasized its efforts to retroactively legalize the mines’ infractions.

Coal stripminers have ripped up hundreds of thousands of acres, ravaging the landscape.

The coal industry argues that South Africa’s antiquated electricity grid is unable to handle the intermittent power produced by solar photovoltaic installations or wind farms, and that southern Africa has some of the world’s largest coal deposits. It’s folly, the industry argues, to leave the billions of dollars and thousands of jobs that coal represents just lying in the ground.

Environmentalists counter that the sun and wind are the answer to South Africa’s serious electricity shortages, which have crippled industries and repeatedly plunged major cities into darkness in recent years. They also stress the threat that coal mining presents to vital rivers and farmland, a warning echoed by agricultural unions across the country.

Most of South Africa’s coal mining currently takes place in three centrally situated coalfields that encompass a large area of Highveld east of Johannesburg, a region that was an uninterrupted sea of grassland and wetland before European settlement. The grassland, when plowed, turns into excellent cropland, and about half of South Africa’s soybeans and a quarter of its corn is now grown there.

Many coal seams in this region are shallow, inviting the attention of stripminers who have ripped up hundreds of thousands of acres. Other miners have dug shafts down to deeper seams. The result is a ravaged landscape. Some important rivers are now so polluted by acid mine drainage, which seeps out of abandoned mines, that they can no longer be used by farms or factories. Underground coal seam fires, some of which have been burning for decades, cause smoking sinkholes to appear.

In January 2012 the town of Carolina, which lies downstream of major coal mines, lost its entire municipal water supply overnight when a huge volume of acid mine drainage was washed into its drinking water reservoir by heavy rains. Residents rioted in protest. It took nine months for the state to restore clean water to the town.

The government has also acknowleged that 21 of Eskom’s coal suppliers were operating outside the law, without environmental authorizations or the required water use licenses. As with the Zuma/Gupta mines, the government sought to retroactively legalize these operations rather than prosecute their owners.

Although coal clearly maintains high-level support, other energy sources may soon challenge its dominance. Geological studies indicate that South Africa may have large, deep deposits of shale gas, for which broad-scale prospecting is likely to begin soon, and coal companies are paying careful attention to a growing renewable energy sector.

South African solar installations could soon provide grid power for half the cost of coal.

The solar potential of South Africa’s western half is extraordinarily good — it’s dry and clear for most of the year — and many parts of the country have high wind energy potential. Since 2012, when Eskom began inviting private companies to bid for contracts to supply renewable power to the national grid, local and international investors have jumped in with enthusiasm. Each bid round for contracts has been oversubscribed.

Google has plowed $12 million into a South African solar farm, and the international consulting firm Frost & Sullivan recently estimated that South African solar installations could be providing grid power for as little as half the cost of coal by 2020.

In its latest update to its Integrated Resources Plan, released this month, the South African government said it would likely reduce the scale of the Coal 3 project by more than half, to no more than 1,500 megawatts, in part because of a projected decline in the country’s electricity demand and projected increased supplies of domestic natural gas and hydropower imported from other African countries.

Coal 3 now faces several hurdles. Eskom’s own experts don’t like it, says Fakir, because the Waterberg region is water-scarce and supplying the water required to operate it will be extremely expensive. Eskom also lacks cheap capital to finance Coal 3’s construction, Fakir says. The U.S. and the United Kingdom also recently announced that they would no longer fund most new coal-fired power plants, either directly or via the World Bank, although China and various multinationals may still provide the cash.

Large coal mining companies, unsure of the domestic market and the effect of a carbon tax that might be introduced in 2015, are now focusing on the expansion of the world’s largest coal export terminal at Richards Bay on the Indian Ocean to increase exports to India and China. Key government powerbrokers support that plan.

Greenpeace Africa’s climate and energy campaigner, Melita Steele, sees Coal 3 as a last-gasp attempt by the coal industry to entrench itself in the region’s future.

“In the coming months and years the renewable projects that are being built now will come on stream,” she says. “People will see that solar and wind power works and creates more jobs than coal. It will be very hard for the government to justify Coal 3 then, and they know it.”